Written by Priscilla Waggoner on 31 August 2017. Posted in Indy Picks 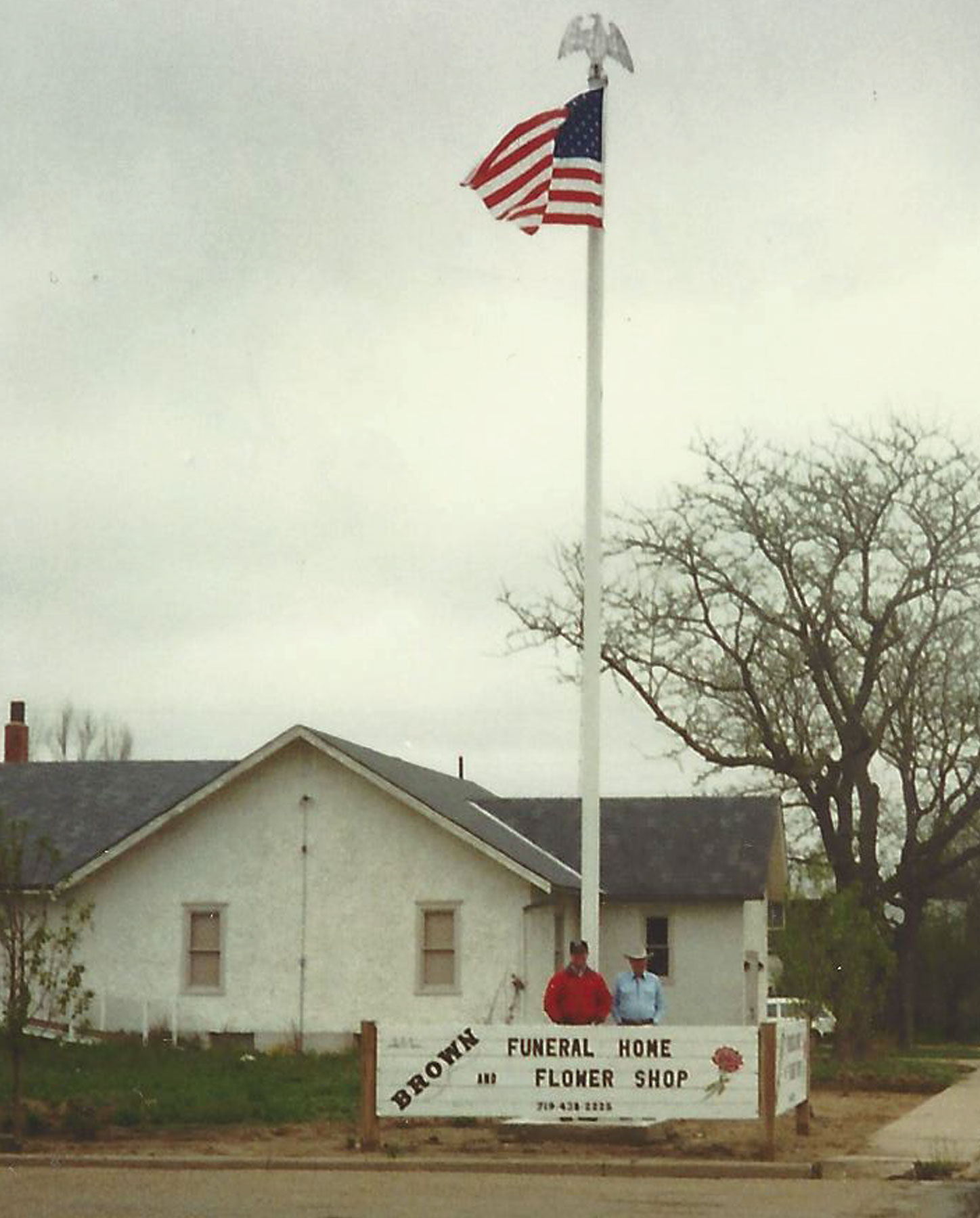 Back then, those lessons applied—and still do--to a number of people in this region where small towns are separated by at least twenty to thirty miles of wide open country. But, even as a boy, there was something unique about Jimmy Brown. When he was about twelve years old, his grandmother died unexpectedly. The events surrounding her death, still vivid in his memory more than 35 years later, determined the course of the life he would lead.

“We came to town that morning and stopped at my great-grandmother’s house,” he says. “When we walked in, my grandfather was there. And sitting at the table was old Sam Peacock. He was the funeral director from Lamar, and there he was, sitting at the kitchen table, drinking coffee and eating breakfast with our family. I was fascinated by the regard with which our family held him. Seeing that… I thought that was a pretty special thing. And I knew then…that’s what I wanted to do with my life.”

It’s clear he’s thought about this over the years as he continues without much of a pause. “Then, the summer before my freshman year,” he says, “I went to Caldwell, Idaho and worked with my cousin who was a funeral director.” He quickly clarifies. “Of course, I didn’t do everything a funeral director would do—you don’t take a fourteen year old kid and just throw him into that—but I wanted to find out if it was really what I wanted to do. And…I found out it was. So, when I began high school, my career path was pretty much set for me.”

For most boys, those early adolescent years are an awkward, uncertain time as childhood is left behind and the beginnings of young adulthood loom on a distant horizon. Had it been anyone else, it would have been surprising for someone to describe that tender stage of life as being the time when he decided upon a career most adults would find very difficult.

Yet, it was entirely believable coming from Jimmy Brown. Listening to the somber, barrel chested, deep voiced man reflect on a career that spans more than 25 years, it seems quite probable that there was a part of Brown that was never truly a child but was, as is said of some people, an old man from birth. That impression would only grow stronger the more he spoke.

After he graduated from high school, Brown was determined to finish college as quickly as possible. “I wanted to get it done and to get on with life,” he says, and, indeed, he did. Brown got his Associate’s degree from Lamar Community College in record time, taking class loads that ranged from 22 to 28 hours per semester. When he transferred to Central State University in Edmond, Oklahoma as one of only 45 students admitted to the School of Mortuary Science (out of a student body with more than 40,000 students), he kept at it, taking highly intensive classes like Microbiology, Physiology and Semi Micro Qualitative Analysis while working full-time at Smith Kernke Funeral Home. After earning his Bachelor’s degree, Brown went on for a Master’s degree in Psychology. However, just six hours and a thesis short of graduating, he left school. “I thought, what am I doing?” he recalls. “Let’s get on with life.”

At an age when most young men feel like life is just beginning, Brown returned to the area where he grew up, devoted to honoring others whose lives had come to an end.

Things didn’t exactly go smoothly at first. Initially, Brown worked for a funeral home run by a man whose practices didn’t fit with Brown’s beliefs and principles. After a dose of strong encouragement from mentor and friend Craig Carmain, Brown decided to go into business for himself.

At 22 years old and with nothing more than a paid off car and a $237 mortgage on a house he’d bought for $11,000, the bank in Kit Carson loaned Brown a significant amount of money. The doors to Brown Funeral Home officially opened on September 2, 1992.

“THIS JOB HAS TO BE YOUR CALLING; OTHERWISE, IT WILL DEVOUR YOU.”

In small towns, more than any other place, a handful of people fill special, even revered roles in the community. The pastor tends to people’s souls. The doctor cares for the sick, the injured and the dying. And the undertaker helps the community bury their dead. 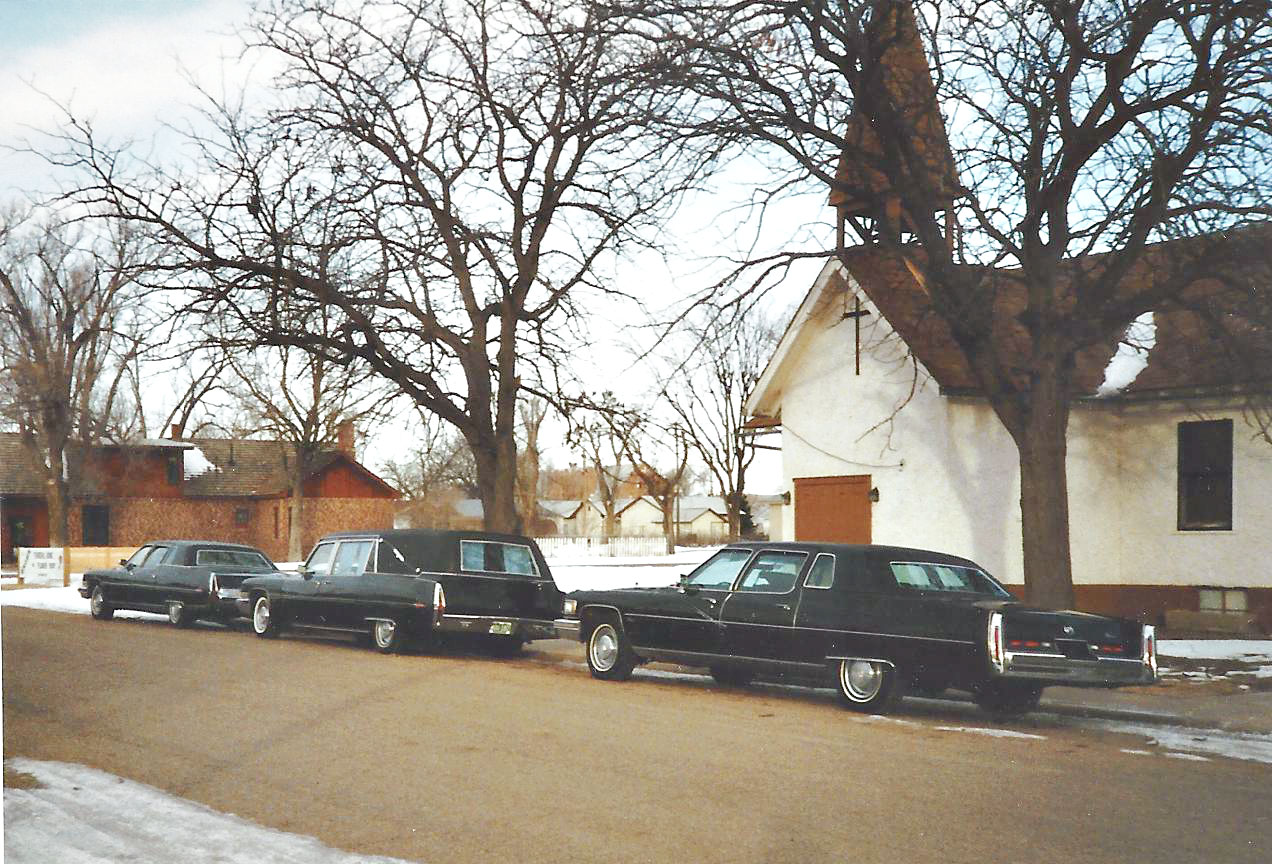 The very nature of Brown’s profession requires him to enter the lives of others when he is most needed, and the people he’s helping are at their most vulnerable. It also requires a wisdom that only comes with age and experience.

“A young woman came to see me and asked if she could be my intern,” he says. “People helped me, so I wanted to help her. But I told her, if you want to do this, you can’t be writing all sorts of personal things on Facebook or hanging out in bars where people in town will see you. Everywhere you go, you’re a reflection of what we do here, and what we do here is a reflection of me.” He pauses. “She didn’t come back. I think she didn’t want to hear that this…this is a way of life.”

He motions to a thick book that sits on his desk. “I’ve buried entire families in my career,” he says. “All the Wissel boys and most of their spouses. All 13 of the Crows. I’ve buried an entire generation—the World War II generation, the greatest that ever lived. I’ve buried probably 1800 people over the years, and I remember them all. But there’ve been some moments that really stand out.”

Brown has been sitting at his desk, speaking in quiet, measured tones. But as he speaks of people he’s served, both the living and the dead, his voice takes on a different tone. “Not too long into things, I buried a child. A little girl. It took me having children of my own to understand what it meant for the parents to say, ‘Here…take our child. Take care of her for us.’” He stops for a moment before continuing. “To some people, a body is just a body. But, to someone, that body is their most prized possession. Do you understand? That…skeleton covered with skin once contained a soul, and it’s all they have that’s tangible, physical proof of life. When someone gives me their loved one to take care of, that’s a very sacred thing. A very sacred trust. And I will do everything I have to do to preserve that. I will never betray the trust people put in me.” He puts his hand on the desk, as if trying to hold something in place. “It isn’t how many times you’ve buried someone. It’s also where you are in life that makes you understand the significance of someone calling you and saying, ‘My father has just died…or my brother…will you please take care of this for me?’ When people call me, they’re choosing to place their trust in me. That will always, always be a very sacred thing that I won’t ever betray.”

By choosing to practice his profession in the town where he was raised, Brown is often burying people he’s known his whole life. Members of his family. Friends of his family. One horrific accident stays with him. 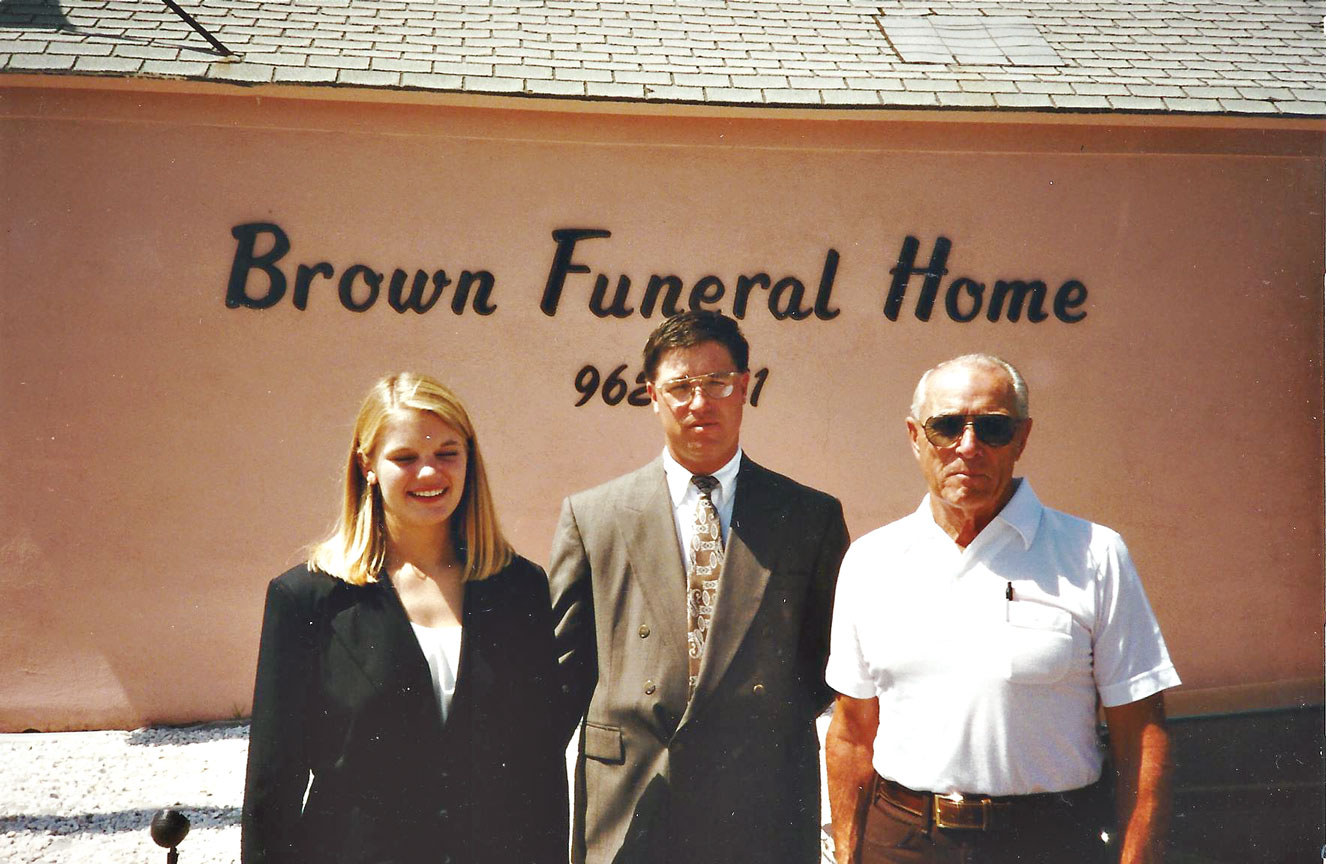 “About five years ago, there was an accident that took the lives of six people. Five children and one adult. I took care of them all—I knew them all. The littlest one had spent the night with my daughter not long before she was killed.” He pauses and, for a moment, there’s a break in the ever present professional demeanor. “We had the viewing at the high school. There were television cameras everywhere and helicopters overhead. I remember standing in the room before anyone was allowed inside, and I looked at those six caskets all lined up, and I thought…a family is gone. An entire family is gone. That was…” He grows quiet and just shakes his head.

So, how does one do what Brown does without feeling the weight of each and every death?

“You mean, how do I keep my sanity?” he asks. “I think each of us have a mechanism of self-preservation. For people who’ve experienced a loss, that self-preservation may be denial or anger. But, in this job, I have to separate my feelings. I’ve buried a lot of close, close friends and family in the last twenty-five years, and it’s hard. I’ve buried aunts, uncles, cousins. My grandfather. Wayne Singer--he was as close as family to me. There was Dr. Waggoner. Philomene Liesen. The list goes on and on and on. But they’re friends…they wouldn’t want someone else doing this. So, there are just times when you have to…separate your feelings, serve the family and honor the dead.” Sensing he hasn’t made his point, he leans forward and puts his elbows on the desk. “I believe God puts in each one of us that mechanism of self-preservation. Those who succeed use what God has placed there. And those who don’t…well, they struggle a lot more. I cry, sometimes. But if I cry too much, it’s time to find something else to do.”

Even with his self-preservation intact, Brown admits to the job taking more of his time than anything else and the impact that has on those in his life. “It’s not easy being married to a funeral director,” he says. “I know that. And I know I couldn’t have done anything I’ve done if Mandy hadn’t been with me.” The family has taken only one vacation, and that was four days long. Four days because…”if someone passed away, I could be back in time to do the funeral,” Brown says. “Being a funeral director in a small town is like a marriage, all on its own.” 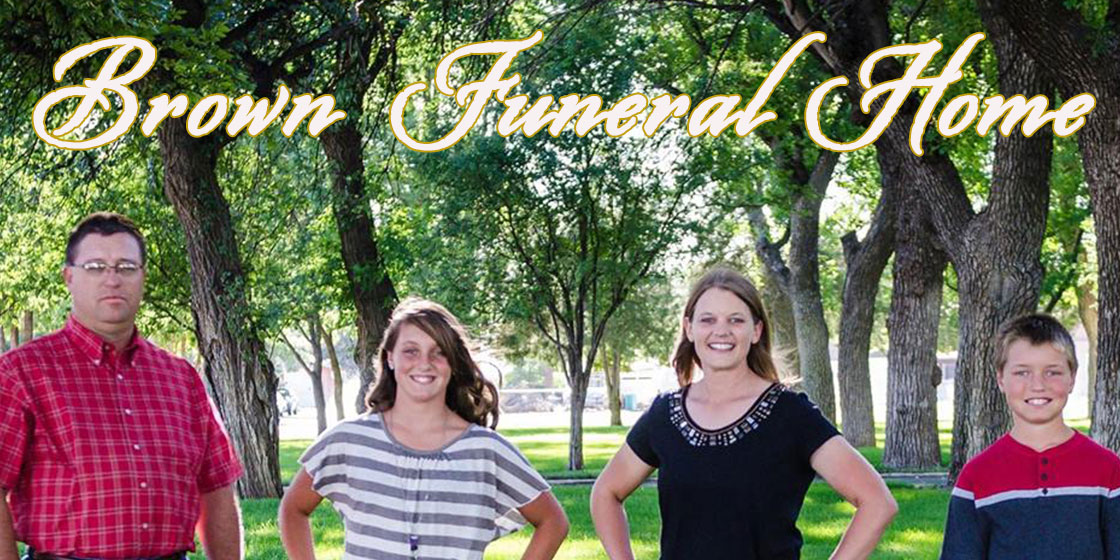 Brown has not only been successful in a business that everyone said would be bankrupt in a year, he’s opened up two other funeral homes in other towns. Is it what he envisioned for himself when, as a boy, he saw old Sam Peacock sitting with his grandfather at the kitchen table? “Yes,” he says without hesitation. “Old Sam knew my grandfather trusted him, and it was a privilege to do what he did for my family. And I know it’s a privilege to bury every person I’ve buried. It’s an honor to honor these wonderful lives.”

Brown Funeral Homes has locations in Eads, Cheyenne Wells and Burlington. Jimmy Brown can be reached at This email address is being protected from spambots. You need JavaScript enabled to view it..