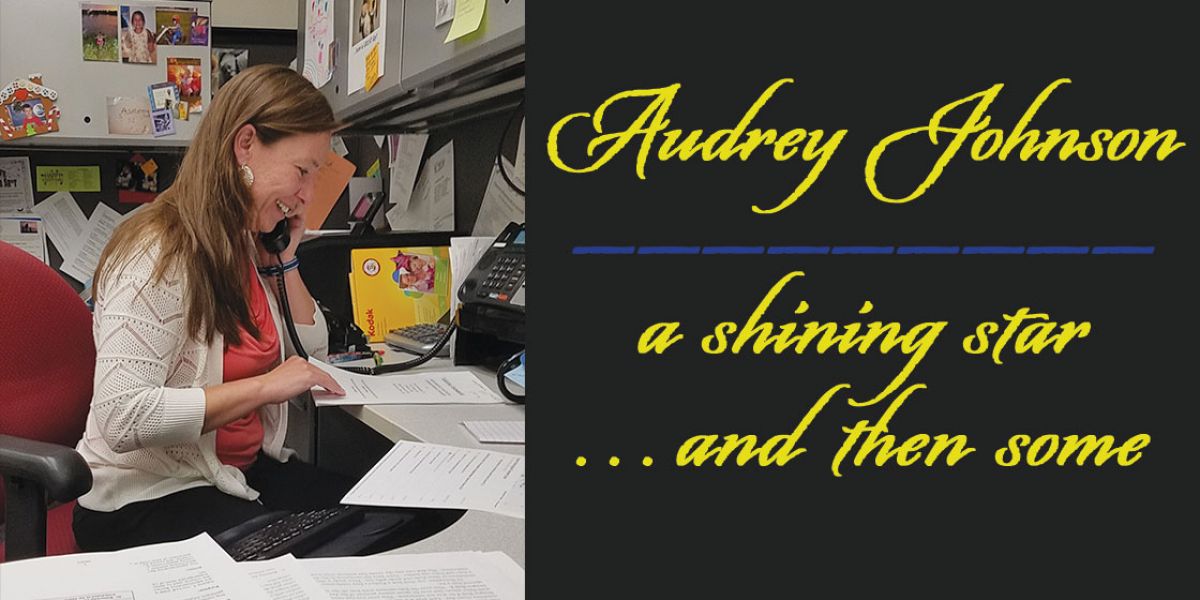 Audrey Johnson: A Shining Star...and Then Some.

2018-07-05 18:44:30
In 2009, when Audrey Johnson returned to Colorado and settled in Kiowa County, she started looking for a job. The only position available was with the Department of Social Services (DSS), so she applied and was hired.  All she thought she was getting was just that: a job. 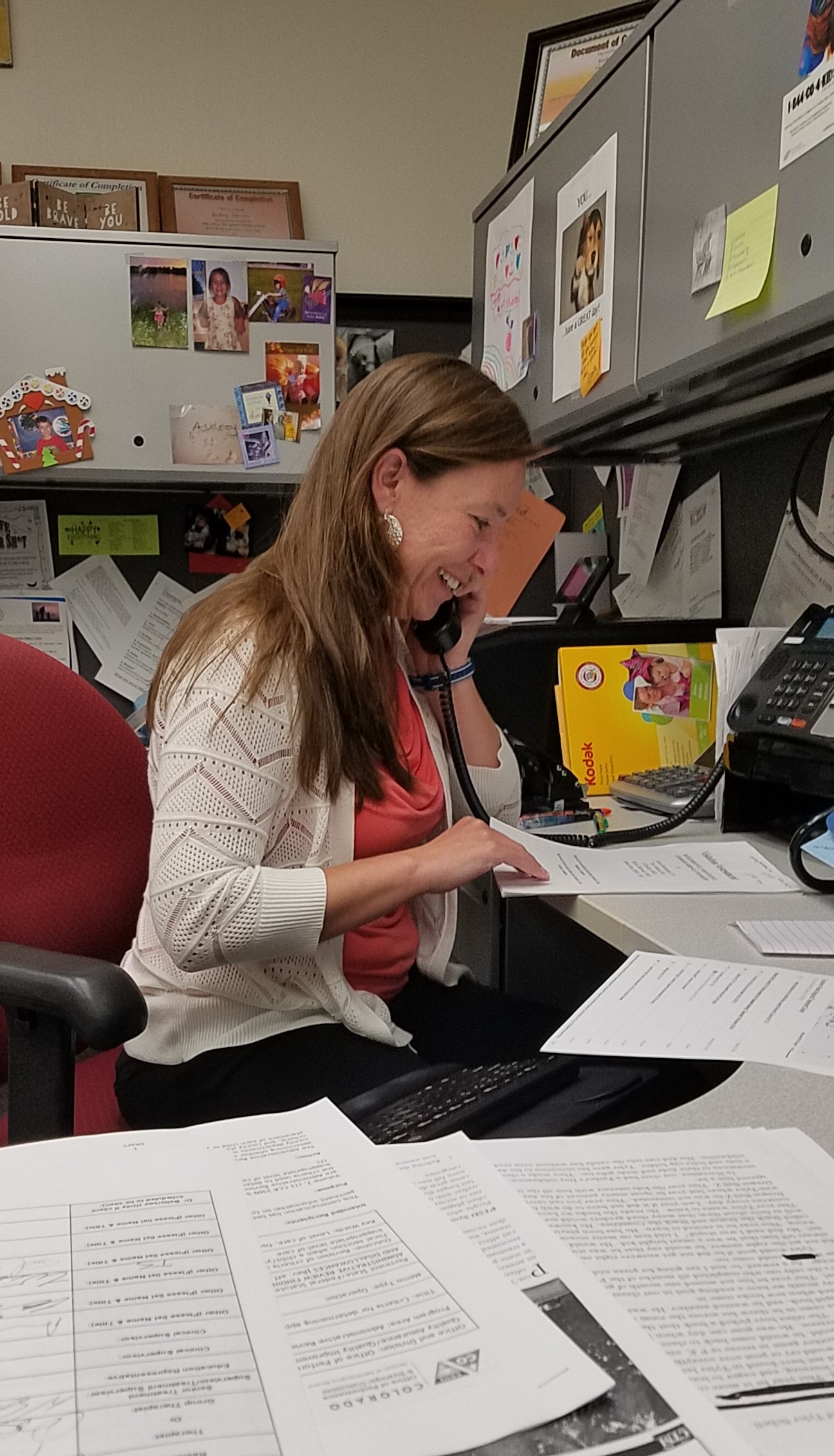 Things turned out a little differently than she planned.
Hired to work the front desk, Audrey was the first person people spoke to when they came through the door.  “I heard so many stories and felt such empathy for people,” she says.  “I could see that they were really struggling.”
At that time, Social Services was experiencing struggles of its own.  Hiring and retaining a professional to work as a Child Welfare Case Worker is not easy in any circumstances.  It’s a challenging job that requires a college degree, but the reality of the job calls for a degree directly related to what the job requires.  In larger, more populated areas, there are sufficient resources to mentor people who are new to the position and salaries are at a level that their hard work is well compensated.

Rural areas don’t have those resources.  Despite a series of different professionals giving the job their best effort while working at DSS, the support was not available to help them be as successful as they had wanted or hoped to be, resulting in turnover in the position.  Consequently, DSS went for long periods where Child Welfare duties were filled just one day a week with one social worker coming from Baca County followed by another one from Crowley.
As a young mother with two children of her own, Audrey continued to be deeply moved by her strong desire to help both parents and children.  She was eventually trained to be a case worker, supervising parental visits and helping with transportation. But the lack of a degree prevented her from going any further.
In 2013, she decided to change that.
Despite all the demands of a family plus working a full time job, Audrey started taking classes at Lamar Community College.  She obtained her Associates degree and then transferred to Metro State University where, as a Social Work major, she applied for and was selected to receive a stipend.
After two more years of hard work, Audrey was awarded her Bachelor’s degree. But she wasn’t done yet.  She applied for and, from a field of candidates, was selected to receive a competitive scholarship through the Colorado Department of Human Services Child Welfare stipend program to go to graduate school.  The only condition: the recipient must agree to work for public welfare for a year.
No problem there.
While continuing to work full time and raising her two children, Audrey enrolled as a full time graduate student at MSU and attended classes—some via online, some requiring her to go to Denver—straight through, including summers.  Advanced placement allowed her to receive graduate credit for some coursework she’d already completed, and, within a year, Audrey had completed her graduate degree.  She was awarded a Masters in Social Work (MSW) in May of this year.
That’s some serious dedication there.
Now that she’s doing what she has worked so hard to do, Audrey feels a real sense of accomplishment and personal fulfillment coupled with a strong investment in the community. But let there be no mistake; her enthusiasm goes hand-in-hand with a mature and seasoned, almost beyond her years, approach to her profession.
“I recognize that my job is not to fix everything,” she says.  “I guess I have a goal going into situations to leave things better than I found them. Maybe that’s making contact and setting up a referral for some services like public assistance or Medicaid or food assistance or maybe it’s to the extremes of having a removal to rehabilitate the parents or, in some of the toughest situations, maybe it’s achieving safety for the child or family through adoption…it’s everything from small steps to big steps that just leave families in a better place than when I met them.”  She pauses for a minute and then adds, “And sometimes it’s just a conversation where I offer them some hope.”
She may describe what she does with a quiet and unassuming humility, but there is no doubt that she feels a deep sense of obligation and commitment to her role in the lives of others.  It’s there in her desk that’s loaded with files and her reluctance to say just how many hours she works each week. (All she’ll commit to saying is that “it’s more than forty”.) It’s also there in clarity of her voice and language as she discusses the larger, underlying purpose.  “I know there’s the misconception that child welfare workers are there to just take away people’s children,” she says, “but that’s really not the way it is.  We work toward re-unification of the family, whenever possible.  People have different ways of parenting, and some may seem better than others.  But, whenever it’s possible, parents have the right to raise their own children and, as long as we know the child is safe and cared for, we work to give parents that right.”
Nonetheless, she’s excited at the direction new programs are taking where the emphasis is on recognizing problems and getting involved before things reach a crisis state.  That relies on building rapport and relationships with schools, law enforcement, hospitals, parents and, most of all, kids. And that is where her personal philosophy works as her best guide.
“I believe empathy is very important,” she says.  “I also believe that actions begin with good intentions.  From the outside, a person’s actions may seem to be motivated by something that’s…less than good…and I understand that.  But once you look at the whole situation without judgment or preconceived ideas, you usually find that the parent was doing what they thought was the right thing to do, whether they learned that from their own parents or just came up with it on their own.”
As she speaks, it becomes very apparent this is not a philosophy she plans to abandon anytime soon.
However, for now, it’s time for her to go.  She’s transporting someone from one location to another and needs to hit the road.  Any doubt about whether or not Audrey Johnson is in this for the long haul vanishes when, in preparing to leave, she briefly opens a closed cupboard next to her desk.  Inside, an assortment of photos are fastened to the cupboard wall revealing the smiling faces of various kids who are of various sizes and age, all gathered together like a small collection of jewels.
She pauses for just a second before closing the cupboard door again.  “I look at those photos whenever I need to,” she says with just the briefest of glances over her shoulder.  “They’re the whole reason I’m here.”
Tweet