If there is any one activity that typifies the difference between folks of the high plains and city dwellers, it might very well be what you do for fun. I’m speaking specifically of that activity called rodeoing, as in, “My leg? Oh hell, Doc, that got busted up when I was young, full of vinegar, and rodeoed for a time.” 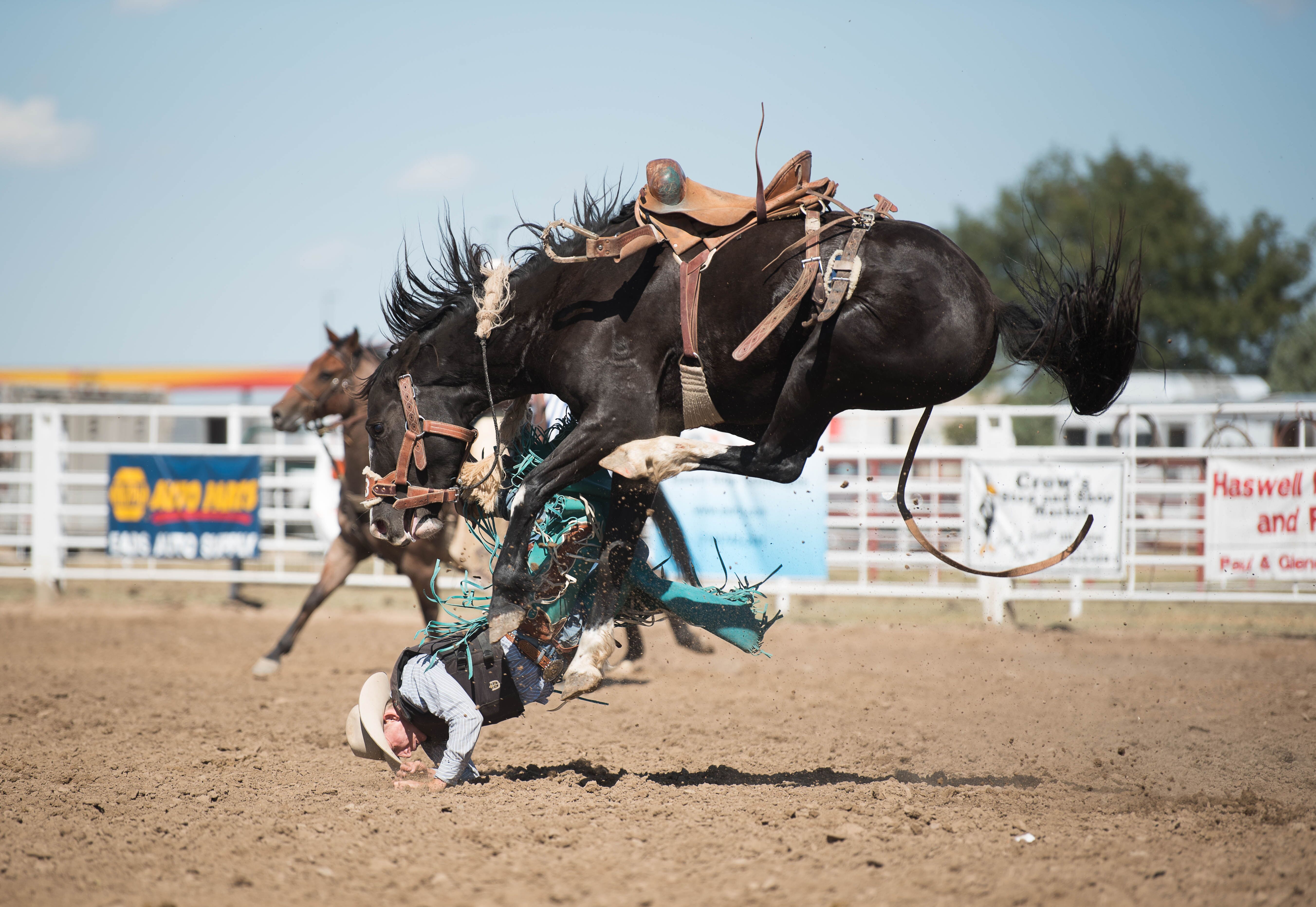 I know that making a noun into a verb is supposed to demonstrate grammatical indolence. But doggone it, I think anyone who ever climbed on a horse or a bull, checked his spurs, wrapped his hand as tightly as he could around a rope that was the only thing other than dogged determination attaching him to that piece of biological fury (as though anyone in his right mind would actually pursue such an attachment), and then said, “Let’er rip!” knows exactly what the word “rodeoing” means.

It refers to a period of time during which all caution and common sense are abandoned. It refers to an activity laden with a politically incorrect substance—testosterone. It also refers to a situation where the medical profession must bend its responsibility to a patient’s physical being in order to honor the integrity of that patient’s spirit.

I had my first contact with rodeoing during my internship at Saint Joseph’s Hospital in Denver. At that time, interns covered the emergency room. Most patients from the National Stock Show came to Saint Joe’s, so I was suddenly a specialist in rodeo sports medicine.

I well remember my first encounter with a bull rider..

“Ben,” I said to a compact young man in a beaten Stetson, red-checked shirt, and well-worn jeans, “I’m afraid you’ve broken your ankle.”

“Aw, shoot.” His flat reaction said he was not surprised. “Well, tape’er up but leave me enough room to get my boot over the tape.”

“Um …this is going to require a cast. Sorry—tape just won’t do it.”

“Sure, Right. You’re really funny, Doc.” Ben smiled uncomfortably. “Hey, I don’t want to push you, but could you hurry things up a bit? I’d kinda like to get lunch, and my next ride is in just a couple hours.

“No way! Man, I got a great draw for this afternoon, a bull that’s only been rid once. If I stay on him, I’ll cash for sure. No way I’ll miss this afternoon’s ride. No way.”

I solemnly shook my head—the one doctor’s gesture that I felt I’d mastered. “You land on that ankle and you will probably turn a simple fracture into one that requires surgery.”

He stared at me, saying nothing. His stare was better than my head shaking. I cleared my throat. “You say this is a really tough bull?”

“Well, that’s all the more reason for you to let me put on a cast.”

“Nope. It’s a big reason for you to tape the ankle and help me make the ride. See, the tough ones, they’re the bulls that give you a chance to move up in points. Tape the ankle, Doc. If there’s some sort of form I got to sign, I’ll sign it.”

In a documentary I once saw about Neanderthals, I heard an archeologist observe that Neanderthal males must have lived a life of constant pain. X-rays of their skeletons revealed an unbelievable number of fractures. “In all likelihood,” he said, “a Neanderthal male was always in the process of healing one broken bone or another.

“The cause for all the fractures was probably the Neanderthals’ failure to invent the atlatl, the throwing stick that allowed hunters to throw spears a much greater distance than was possible by hand. The Neanderthals had to get close enough to literally stab prey with their spears. That sort of proximity to a wooly mammoth was quite unhealthy.”

The archeologist smiled. “Surprisingly, we have a modern counterpart to Neanderthal hunters.” He held up another x-ray and pointed to a number of fractures in an arm and hand.“ This film has about the same number and kind of fractures we see in the x-ray of a Neanderthal hunter. The film was taken just last summer—in Wyoming—at a portable x-ray unit—at a rodeo.”

Bull and bronc riders have skeletal damage equivalent to the injuries of Neanderthal hunters.

I’m sure there is a bull rider out there who’s thinking, “I believe that guy just called me a Neanderthal. Think I’ll find me a Fred Flintstone number two wood, pay him a little visit, and demonstrate a Neanderthal literary critique.”

Hold on partner. Let me finish. I mean you no disrespect.

It takes a certain kind of courage to ride bulls and broncs. It takes a courage that ignores pain. It even ignores the possibility of death. It’s a courage that has often been called downright crazy. It is a courage usually associated with young men and testosterone. It is often cited as the cause of most teenage auto accidents—“I can go as fast as I want. I’m IMMORTAL—BULLET-PROOF.”

Neuro-scientists have been able to link this courage with brain “immaturity.” Neuronal hookups from the prefrontal lobe, the part of the brain that creates “executive inhibition,” have not fully developed. Young men with this sort of immaturity are impulsive. They are risk takers. It is estimated that the average male does not fully develop these hookups until he’s 25.

Grins all around for those who have chastised some young stud because he just “won’t grow up,” right? Hold the grins. Without all the crazy young men, none of us would be here.

Without the crazy young hunters, the tribe went hungry. The older males and the women of the tribe were too mature, too “smart” to run up to a wooly mammoth and stab it with a flint-tipped spear. “Are you crazy? We’ll eat berries.”

Not much protein in berries. Protein is what carried a tribe through the winter.

And now? Virtually all of the first and second waves that hit Normandy on D-Day were “kids,” males under the age of 20. The men who planned D-Day knew that older, more experienced soldiers would never do what had to be done.

For thousands of years, crazy young men have done the bidding of their societies. They have endured the pain of the many fractures. They have sniffed death’s putrid breath, wrinkled their noses, laughed, and gone “over the top” when the whistles blew. They have quietly said, “let’er rip” and tried to prove their immortality while the rest of us watched.

Perhaps someday our existence will cease being short and brutish. Perhaps someday we will cease sending crazy young men to battle each other, glorifying their hopeless bid for immortality while we scoff at their craziness. If that day comes, I hope we still have at least some crazy young men in battered Stetsons and checked shirts. Without the honesty of their courage, impulsive and self-destructive though it may be, we will become timid and cautious.

The universe does not look with favor upon the timid and cautious.