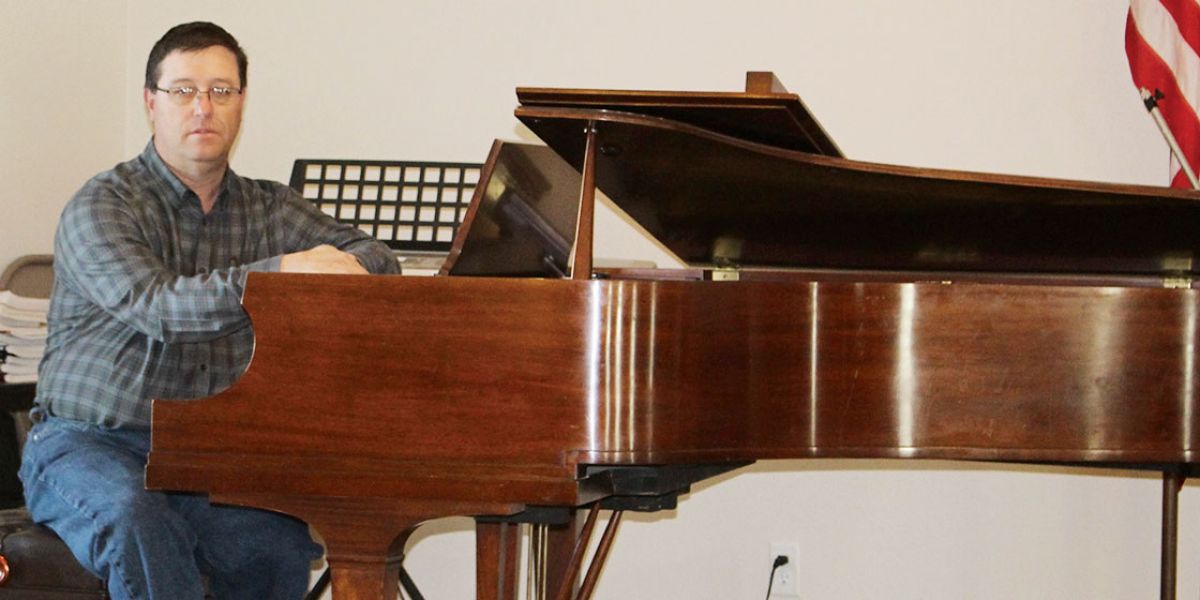 The Extraordinary Music of Jimmy Brown

It is no understatement to say that Jimmy Brown is intensely passionate about those things that matter to him in life. He speaks of his wife, Mandy, and children, Lauren and Ross, with the deep love of a man who cherishes his family. As owner of Brown Funeral Home, he pays attention to every single detail of each and every service, making certain that the family’s needs are met and their loved one is treated with utmost respect and dignity. As coroner for Kiowa County, he takes his duties very seriously and will call to task anyone who misstates details related to a person’s death. He is highly involved in his church and will state, without hesitation, that his faith guides him in all things. All of this speaks to the fact that Jimmy Brown determined early on what was important, and he has devoted himself to honoring those priorities ever since. 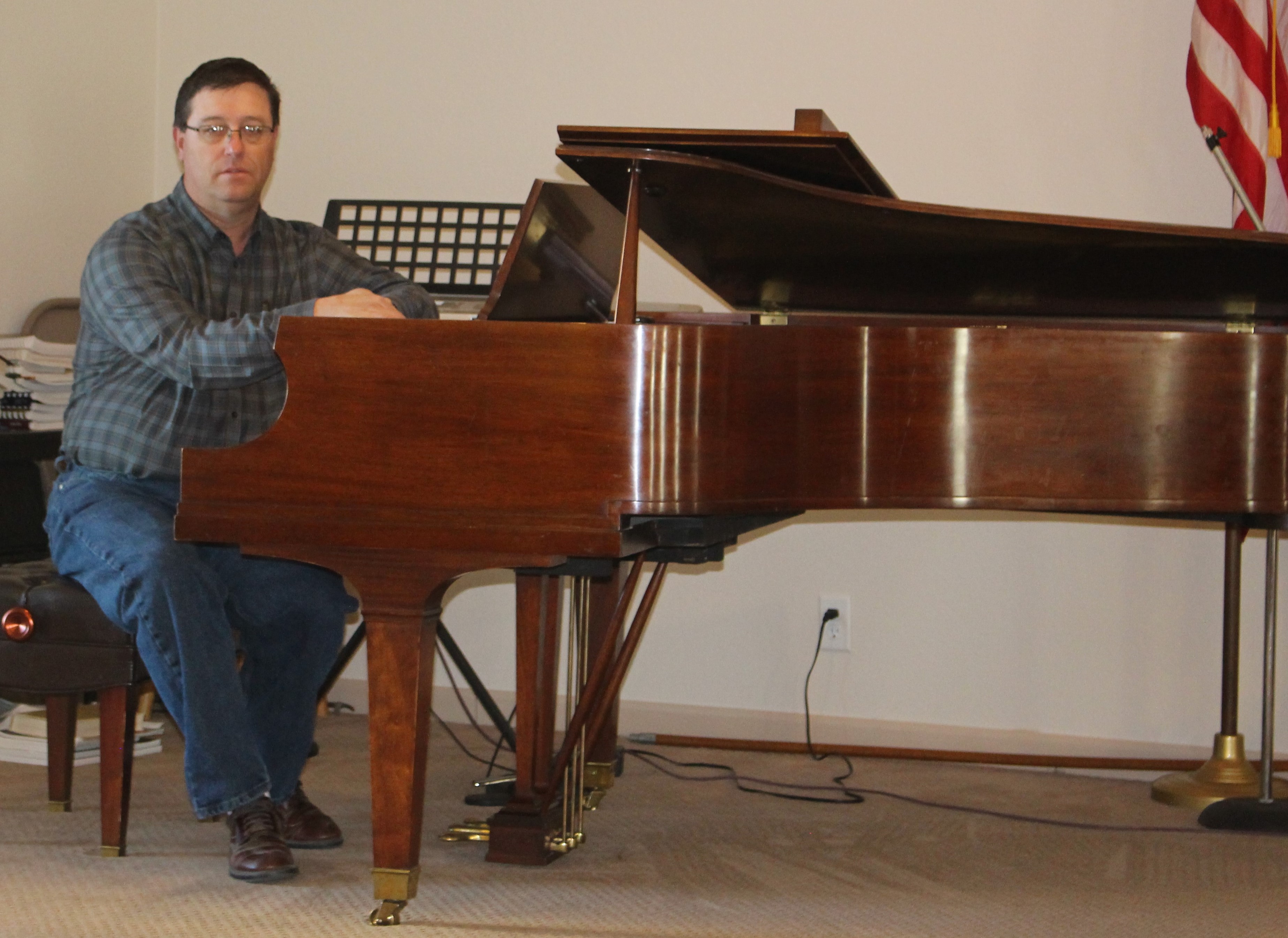 But there is one core passion in Brown’s life that has been there for—quite literally—longer than he can remember, and its strength is matched only by the size of the gift he was given to pursue it.

That passion is music.

Brown did not come from a musical family. Raised in Chivington, the Browns made their living as ranchers, so it’s not exactly known how his gift was recognized when he was just four years old. But somehow it was, and Lauretta Brown—Jimmy’s mother—decided to take him to a piano teacher in Lamar for lessons. “The teacher had a metronome on the piano,” he says, moving his index finger back and forth in demonstration. Brown pauses for a brief moment and then slightly shrugs as if, somehow, he was the one who fell short of expectations. “I was…bored,” he says. His mother then took him to local legend Philomene Liesen for piano lessons. As he tells it, Philomene was unimpressed and told Jimmy’s mother, “You can’t teach a kid who doesn’t have any talent.” (Years later, Philomene—who became one of Brown’s closest friends—would repeatedly wonder what she could have been thinking.)

Luckily, Lauretta Brown was not to be dissuaded, and she took young Jimmy to Trix Miller, another local legend and accomplished pianist who was still giving lessons in her seventies. It was with Trix that the uniqueness of Jimmy’s talent eventually became apparent. “Trix would put the sheet music on the piano for me to play,” Brown recalls, “but I used to ask her to just play it once and let me hear it. I knew that, if I heard it one time, I could play it myself.”

And that’s exactly what he did. Without knowing how to read music, without—at the age of 4—even knowing how to play the piano, Brown was able to recreate the music he had heard after hearing it only played…once.

While many musicians can teach themselves to play music “by ear”, that ability typically develops only after someone already knows how to play the instrument. However, according to scientists, individuals with Jimmy’s gift are much more exceptional with an ability they can only explain as the innate capacity to “hear” music at a different and much more intuitive level than others. 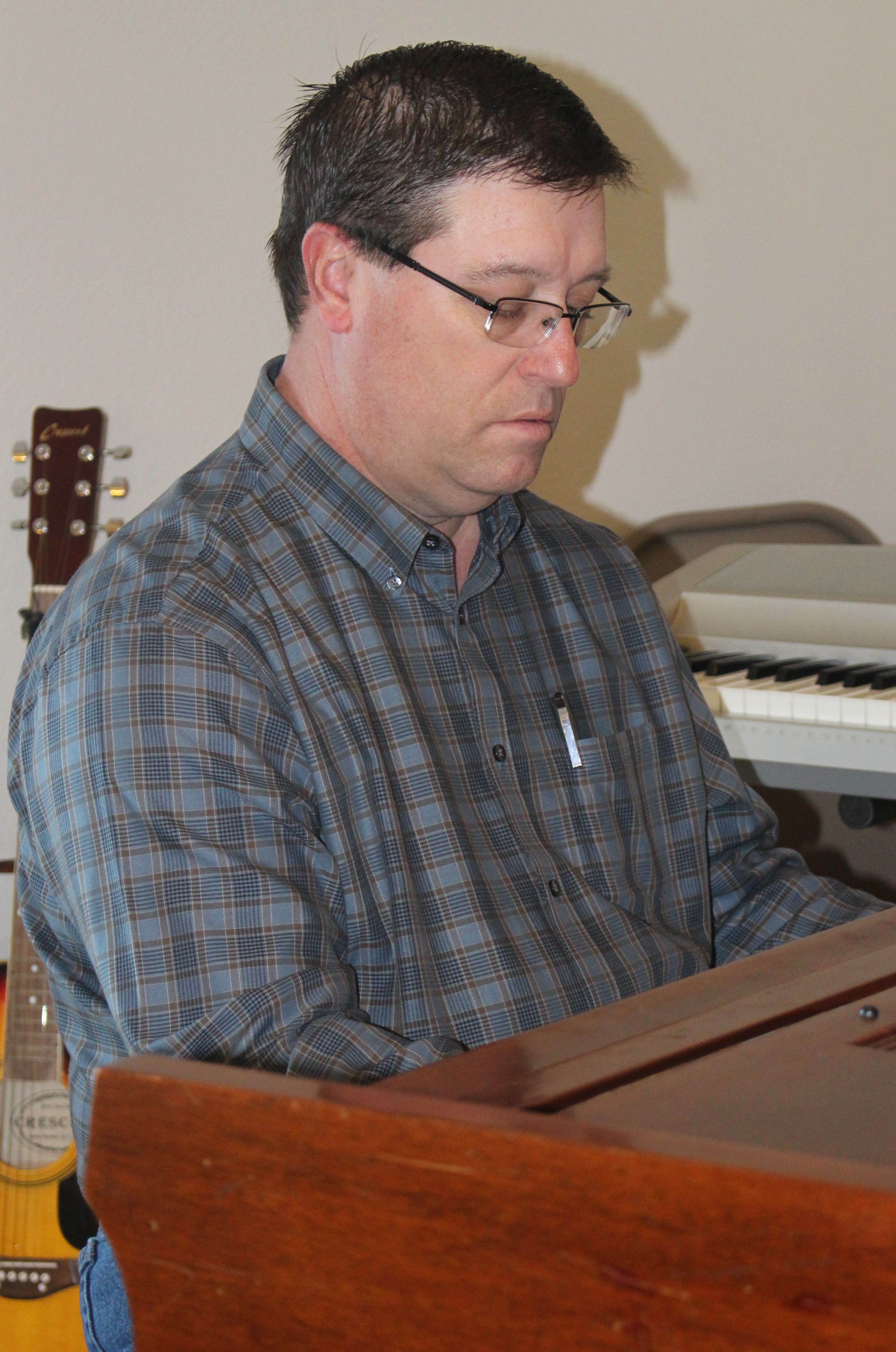 It took two years for Trix to realize Jimmy was playing completely “by ear”. Once she realized his ability, she changed her approach. Instead of forcing him to “learn” piano in the traditional manner, Trix allowed him to learn in his own way. “She developed the talent God gave me,” Jimmy says, with no small amount of gratitude. "She didn’t try to shape it. She just…let it grow on its own.” Before long, the lessons transformed into duets as Jimmy, just 6 or 7 years old, played music side by side with his teacher. “I walked to her house—I’d usually stop to get a candy bar at Scoggins for a nickel on the way—and get there at 4 o’clock,” he says with just a hint of a smile. “Then she’d get out the hymnal, and we’d play.”

With the world of music open wide for him to explore, Brown spent much of his time at the upright piano in his house, reveling in the sound that “comes from beneath the piano” as he practiced four hours a day, every day, despite being just 5 years old. By the time he was eight, he was also playing the piano at church every week where he was encouraged by Edith Parker, another musician to whom he owes a debt of gratitude. And at night, every night before he went to sleep, Jimmy listened to tapes of his favorite pianist—Dino Kartsonakis, an American musician of Greek heritage known for his “virtuosic arrangements of sacred music for the piano.”

As he grew, Jimmy’s appreciation for music expanded as did his experience in playing different venues. At 18 years old, he was playing at the Elks Lodge in Lamar. He played the accordion in a Country and Western band. When he was attending mortuary school in Oklahoma City, he played at the Trinity Baptist Church where as many as 2,000 parishioners have attended services in the 55,000 square foot facility. One of his most remarkable memories was playing with Dino Kartsonakis when, in 1990, he attended his concert in Shawnee, Oklahoma.

As Brown grew older, he also discovered an “insatiable love for southern gospel music”. At this point, the depth of Brown’s love emerges. “Music is expression,” he says, unaware that, as he speaks, he’s opening his hand and extending his fingers as if letting something loose in the air. “Music has meaning. I can look at the words of a hymn and express what’s written in the way that I play. I don’t think about it ahead of time. It just…comes out, and I never play a song the same way twice.”

As he speaks, it also becomes apparent that his passion for music is intrinsically interwoven with his deep faith in God. “Music has meaning,” he says. “It’s a comfort. It ministers to people. It communicates to people God’s message and takes you to a place of worship, a place where nothing else can take you.” He stops for a moment and then begins again, his normally deep and resonating voice growing softer and more reflective. “Music makes me realize what God has done for me. My beautiful, amazing wife…my amazing children…my health. God has given me so much, and music makes me realize all of that.”

Last fall, Brown decided to finally do something he’d thought about for a long time. “There are no recordings of my music,” he says, “and I wanted to do something to leave for my wife and kids.” He contacted Doug Pittman, owner of Agape Music Studios in Atlanta, Georgia, who has recorded a number of well-known artists. Pittman agreed to come in October, an, along with a boatload of recording equipment, he came to Praise Community Church to record Jimmy playing on the specially selected 1961 Baldwin Model L 6’4” Grand Piano he bought roughly ten years ago in the place he loves so much. (As Brown puts it, “If I get kicked out of church, the piano goes with me.”)

Pittman told Jimmy to plan on the session taking roughly ten hours to record four songs, but things went very differently than expected. Without a playlist or any sheet music, Jimmy recorded ten songs in four hours—all played beginning to end in one take with Pittman doing nothing but, essentially, controlling the volume. “The songs just came to me,” Jimmy says.

When Jimmy finished, Pittman took off his headphones, clearly moved by what he’d heard. “That sounded like one big wall of music,” Pittman told him. “One big wall of music coming at me.” As Jimmy describes hearing Pittman’s reaction, he admits to beginning to cry. “I said, it really sounds like that to other people? That’s how it sounds? And Pittman just said, yes. It does.”

On December 22nd, Brown got the completed CD along with some very strong advice. “The CD is remarkable,” Pittman said. “I think it’s the best recording I’ve ever done. You need to get this out to people.”

And, so, that’s exactly what Jimmy Brown is doing. 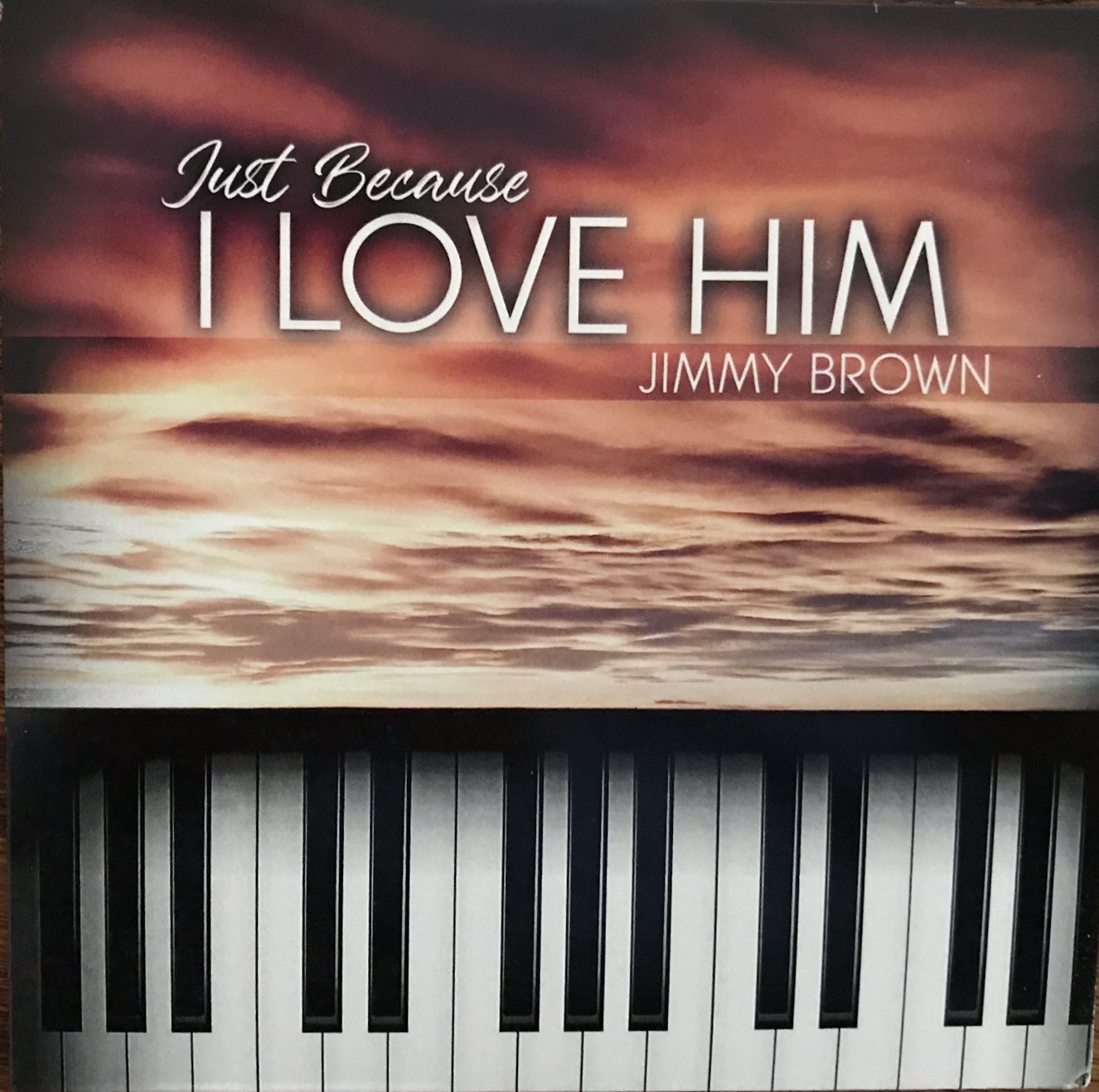 “Just Because I Love Him” is a compilation of Brown performing ten songs (of the roughly 1800 songs he has in his head), including “Amazing Grace, My Chains Are Gone” as well as “Battle Hymn of the Republic”, which Brown plays in a way such that the piano actually sounds like drums being beaten on the march to war. “Everybody has their favorite song,” he says. “These are some of mine.”

Brown then rises and goes to his piano where he plays “How Great Thou Art”, chosen in honor of a good friend of his who passed away four years ago. As the music swells in the sanctuary where he plays, all that can be said is that all that has been said up to that point is exactly right; the music Brown makes on that wonderful, old, majestic 1961 Baldwin Grand piano does sound like a wall…a powerful, sweeping wall that, at the same time, embraces the beauty of the soul and the omnipresent love from which all beauty comes.

Brown’s music comes to a sweeping end, and this serious, somewhat intense man looks up from the ivory keys before him. “I know what music has meant to me in my life,” he says, quietly. “Maybe the music will bless others and comfort them, as well.”

“Because I Love Him” is currently for sale at Demitasse in Eads, Brew Unto Others in Lamar, Kirby Vacuum Sales in Lamar, Prairie in Bloom in Cheyenne Wells or by contacting Jimmy Brown directly at (719) 892-0042. Asking price is $12.00.