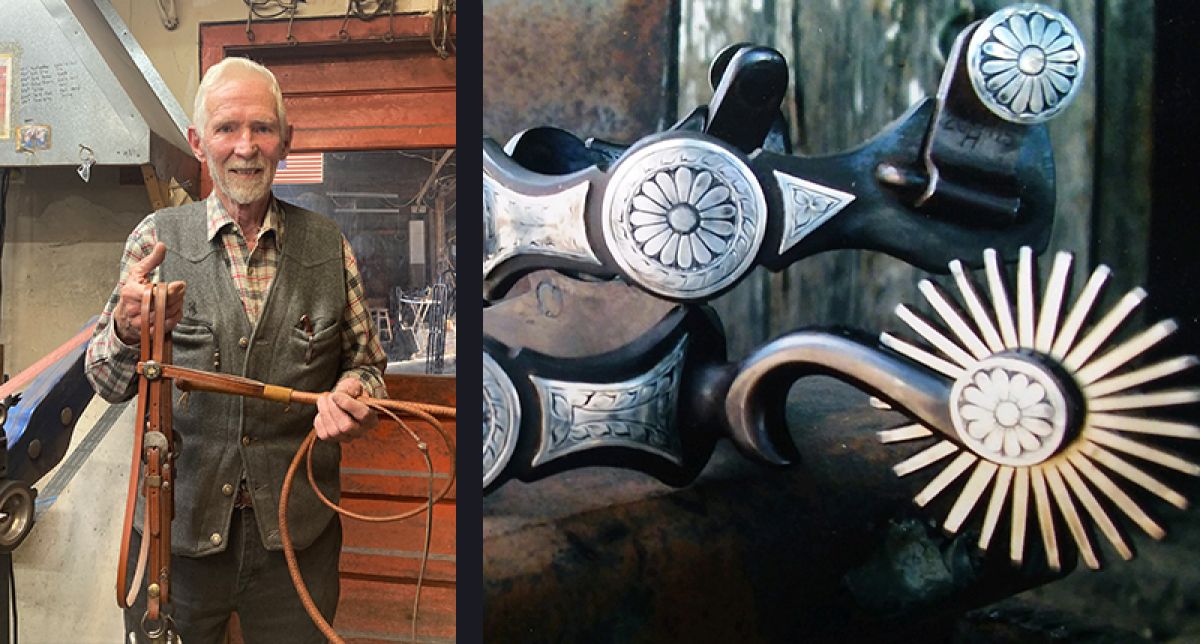 When I stepped into his shop, it was like being in the movie, “Back to the Future.”  Mike Henry’s little house of treasures is tucked away in Lamar, but once inside it was a blacksmith’s dream in the old west.  The cowboy way of life and all the gear that goes with it was on display everywhere.  Before we made it into the think-tank of the operation, I saw things that one would use to cook around the campfire for cowboys driving cattle from Montana to Texas.  There were handmade coffee pot tippers, forged tongs, forks, spoons, steak turners, bacon flippers, and more.

Henry, who was raised in Lamar, has been making unique custom-designed cowboy gear for almost 21 years.  He started out making custom knives but then branched out to bits, spurs, whips, buckles, stirrups, and other things.  With a background in ranching and cowboying, Henry knew what working cowboys needed and liked.  He got many of his orders just by attending and helping at brandings.

He has used different mediums including kangaroo hide, leather, rawhide, silver, brass, copper, and steel.  He has taken an iron spoke out of an implement wheel and made spurs out of it.   With his craftsmanship, he can make one-piece spurs (no welding of the shank). He has made amazing cooking utensils out of railroad spikes.  I also saw a beautiful pair of earrings he made and then he showed me the engraving he had done on his gun.

When asked what got him started in this business and who taught him, Henry replied, “I am pretty much self-taught.  I got started in this because I couldn’t afford the quality and style of the gear I liked so I started making my own. The late Billy Doyle Rogers and I craft articles with similar style and quality.”

Henry said he had made some bronc spurs for the Pro Rodeo Hall of Famer, Bobby Berger.  Berger was the 1977 World Champion Saddle Bronc Rider and inducted to the Professional Rodeo Cowboy Association (PRCA) Hall of Fame in 1990.  Other noteworthy customers of Henry’s wares are 4-time world champions of the Working Ranch Cowboys Association ranch rodeo finals Phy Lord and Nick Peterson.  They use Henry’s spurs, buckles, and other gear made in the shop on 4th Street.

The workmanship in the beginning photos and end product of one of Henry’s bull whips was nothing short of amazing.  The braiding and intricacies of his work show his patience for perfection. He doesn’t advertise or go to trade shows, but relies on reputation and word of mouth.  His handcrafted items are truly unique and they garnish top dollar from clients who know quality when they see it.  Look for the slanted double HH brand that is authentic Mike Henry craftsmanship.

Once we got the local “Dale Brisby” (B.L.) headed on his way, Henry and I had a nice visit about his wares and the cowboy way of life.  Time marches on but unique cowboy gear never goes out of style.  Happy Trails.