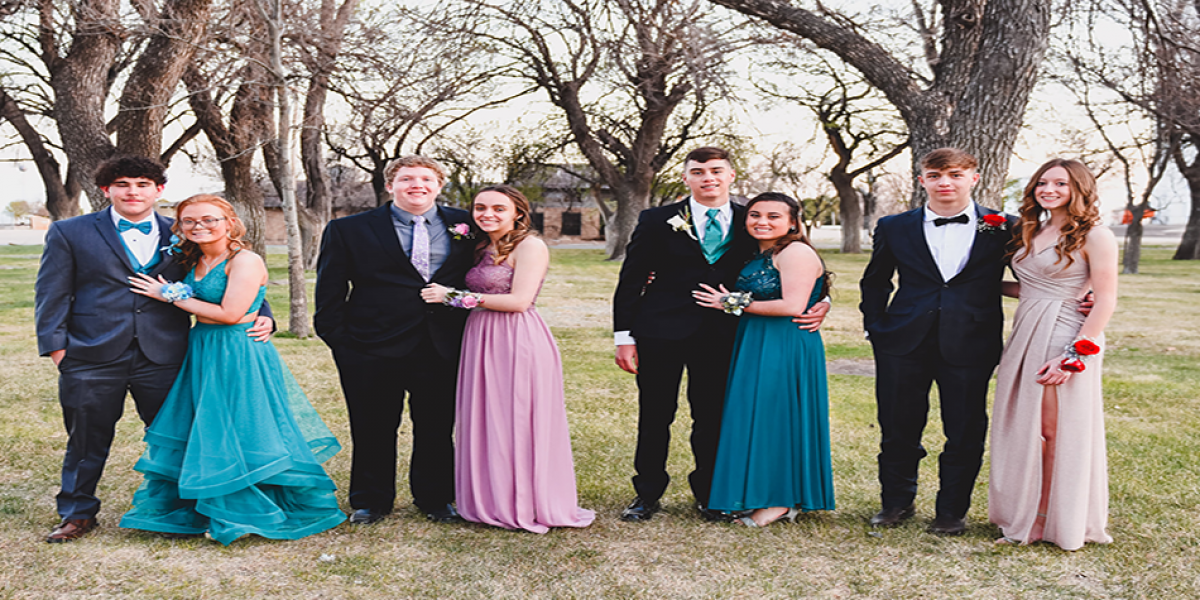 Nothing these days seems to be as they were before the COVID-19 pandemic hit us like a nuclear bomb a year ago. Living through the pandemic was an experience that left scars and forced us to look at how we do things.  Back in the spring of 2020, we suffered fallout after fallout of cancelled events, cancelled people and cancelled fun.  That included cancelling the annual prom that has for generations been a timely coming-of-age event.  But, this year, the prom returned, if not with a new-normal twist.
Kiowa County has been slowly coming out of the COVID scare and has been in the Level Green of the state’s COVID Dial that measures the degree that the virus is still prevalent in the population.  Being Green meant the virus is under control in Kiowa County and it also meant that we were free to (mostly) start enjoying life again.
However, the Level Green lifting of restrictions does not pertain to the school where the same procedures set by the health department in August and held tight through the virus-laden months of November and December are still in place.  The Eads School District continues to be conservative in its approach to coming out of the pandemic.  As such, when the subject of the Prom came up, they ruled that students attending the Prom could not bring guests who were not in their cohort at school.  In essence, they couldn’t invite anyone who didn’t go to high school in Eads.
The students and some of the parents decided they had a better idea and so contacted the Board of County Commissioners to see if they could use the newly renovated Eads Senior Center in the Murdock Building as their venue for the 2021 Prom.  The BOCC deliberated and agreed to rent the facility to the junior Class of 2022 who were to be the traditional Prom hosts.  The BOCC as a government entity charged them the usual fee, but some private donations were made to the Prom allowing them to utilize the spacious venue with little cost.
The theme of the night was “Paris,” and the décor was a series of twinkle lights in low light.  Music was provided by Russ Watson who, along with wife Bylie Jo, and junior parent Danielle Deines sponsored the event.  The food tables were set up in the south building, better known by old-timers as the Scoggin’s building.  The main event was held in the spacious Wissel building, which is the middle building on the ground floor of the Murdock complex.  The floor had not been installed before the prom, and was just particle board, but it did not distract from the dance floor that was located in the middle of the venue under the grand skylight.
The Grand March was one for the books as the creative students came up with a way for the community to admire them in all their formal wear and still maintain social distancing and venue limitation rules.  They asked the community to park along Maine Street with their lights on and pointing to the middle of the street.  The couples then came down on individual cars, akin to the Homecoming days of old, and were greeted along the north to south route by dozens and dozens of proud parents, grandparents and friends.
Photos were taken inside the venue by Braylynn Eder, and the parents were allowed in the venue in order to observe the traditional ceremony of the crowning of the Prom King & Queen.  Senior King candidates included Joe Haase, Hatch Nelson and Zack Fowler.  Senior Queen candidates were Amber Kopasz, Colby Stoker and Mollie Kelley.
The 2021 Prom King & Queen were Joe Haase & Amber Kopasz.  After they were crowned, a balloon net opened up from the beams of the ceiling and balloons were released to the delight of the crowd.  The balloons then served as part of the fun enjoyed by the attendees.
One senior girl stated, “I really thought that was such a nice touch and it made the prom so special for us seniors.”
A number of students said they had a ton of fun and almost everyone stayed the entire time until the Prom closed down at midnight.  Next came the after-prom fun at the Community Building located on the Kiowa County Fairgrounds.  Also a new venue for the after-Prom party.  This event is sponsored by the senior’s parents and designed to keep the kids together and having fun until it’s time to go home.  After-prom parties have become an important and life-saving tradition of all area proms for a number of years.
The after prom lasted until 3:00 am.  There were a lot of great prizes and fun games.  At the end they were served breakfast and sent home.
This new normal event might just be better than the old way.  The kids had quite a bit to say about the night.  “It was really nice and quaint,” observed a junior girl.
A senior girl said, “It was different but nice not to have to wear masks.  I loved the rustic Paris garden décor.”
Another observer from the sophomore class was intrigued by the venue, “The light coming through the Maine Street big windows---being able to see out on the street---made it feel like we were in a city.  We had a view!”
Overall, the students loved the new normal and are thinking that perhaps this is one good change that emerged out of the burning ashes of a COVID year that seemed to destroy everything else that had been important to them.