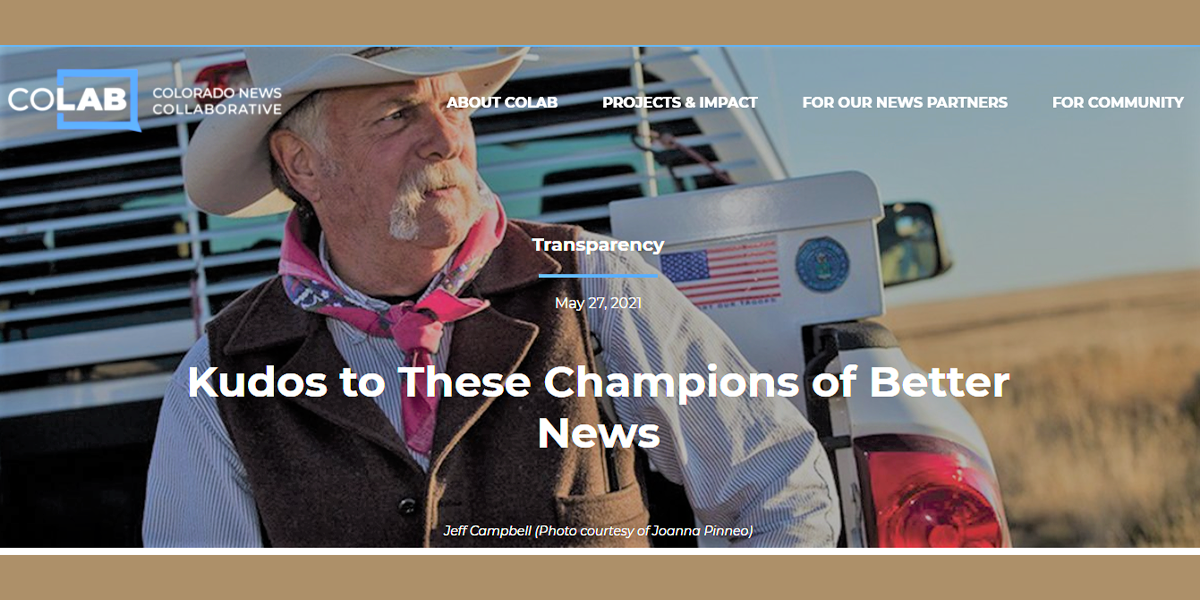 While all the rights guaranteed by the Bill of Rights are vital, the freedom of the press and the freedom of speech are crucial to a functioning democracy, for it is in informing the public, the free expression of the thoughts and opinions of the citizenry and the publishing of those thoughts and opinions for the consideration of others that participation in democracy, at its most fundamental level, is made possible, and the power that resides with the people is preserved.

In recognition of this most essential truth, each year, the Colorado Press Association (CPA) bestows their prestigious “Friends of the First Amendment” award upon an individual or a group who has behaved in a way that educates, informs, honors and upholds the freedom of speech and freedom of the press for the consideration and betterment of the people.

This year’s award went to Jeff Campbell, resident of Eads and regular contributor to the Kiowa County Independent, for the Letters to the Editor that Campbell started submitting the week following the killing of Zach Gifford by Undersheriff Tracy Weisenhorn and deputy Quinten Stump, and for every week thereafter until personal illness prevented him from continuing to submit his thoughts and opinions about one of the most egregious events to occur in Kiowa County in a very, very long time.

Campbell, who some locals refer to as “the judge” due to his role as a municipal judge for the Town of Eads, brought with him a unique perspective to the officer involved shooting and Gifford’s murder. Campbell spent twenty-three years as a law enforcement officer, including a year-and-a-half as the Deputy Sheriff of Hidalgo County, New Mexico, a southernmost county which is on the U.S. border with Mexico, followed by more than 19 years as a special investigator working serious crimes for the office of the New Mexico State Attorney General. As part of his service lasting more than two decades, Campbell was involved in multiple incidents dealing with the investigation, pursuit and capture of felons as well as training fellow police officers.

As a longtime resident of Eads, Campbell also personally knew Zach Gifford, whom he described as “a non-violent person.” Gifford being shot three times in the back as he was running away struck Campbell as wrong, and that sense of “something wrong” prompted Campbell to start writing. But anyone who knows Campbell knows that his exercising his freedom of speech is something that is a part of who he is and how he views his role in both his community and his country and preceded the killing of Gifford.

“When you’re a police officer,” Campbell says, “you have to be an advocate for those who can’t speak for themselves – whether it’s someone who’s elderly or a child or a person who’s been killed.

“Freedom of speech is one of our most important rights, and it’s kinetic. It’s a kinetic right. It has to be actively used. It can’t remain dormant. We have to use it or we’ll lose it. Whenever we see something that’s wrong, we need to speak out.”

In this case, “speaking out” about the officer involved shooting was not a particularly easy thing to do. The lack of information that was made available to the public and the unwillingness of local officials to make any sort of comments on “a matter still under investigation” left Campbell as, much of the time, the lone voice that continued to advocate for transparency.

“In Kiowa County, neither of the two severely understaffed local newspapers investigated why the undersheriff and a deputy opened fire at the back of an unarmed local handyman, Zach Gifford, as he fled from them during a traffic stop last year,” read the statement from the COLAB, the group that nominated Campbell for the award.

“It took a local resident to break the silence. Jeff Campbell, a retired police officer and criminal investigator who knew and liked Zach, began writing letter after letter to the Kiowa County Independent editor, demanding transparency and accountability from the sheriff’s department. “The longer we wait, the fouler the smell,” he wrote in one.

We reported on Campbell’s year-long letters-to-the-editor campaign in our story on the shooting and a case that has now seen attempted murder charges filed against the deputy, the firing of the undersheriff and the announced resignation of the sheriff.

Campbell’s persistence moved us to nominate him for the Colorado Press Association’s 2020 First Amendment Award which, much to our delight, he won last week.”

Not everyone agreed with what he was writing, and Campbell reluctantly admits, “I took a little heat, but I don’t care.” When asked about others who may have agreed with him but were silent, Campbell says, “It’s not my concern. It’s their prerogative to speak out or not.” But what meant the most to Campbell was the encouragement he received from people as he just walked down the street. “People came up to me and thanked me for writing the letters, and that was enough for me.” Those individual expressions of gratitude explain Campbell’s signature ending to his letters: “I know I do not stand alone.”

Even as weeks and months went by with no apparent progress on the case, Campbell kept on writing. “I had to continue. If you stop, you lose momentum. If you stop, things go by the wayside.”  But, as time went on, Campbell also tried to have a positive voice, comparing what should have been done with what actually happened. “I was writing not just for Zach but for what the community was going to do about it. What happened damaged the reputation and credibility of law enforcement in the county. How was that reputation going to be repaired? How can [the problems] be fixed so something like this never happens again?”

As the only officer charged in the case is either going to trial or a resolution is found, Campbell continues to have one wish. “I hope the law is applied to everyone. I want justice and the law to be fulfilled to the full extent.”

With that in mind, Campbell has every intention of continuing to write Letters to the Editor as soon as he has recuperated fully from his illness. When that happens, it will be a good day, for people like Jeff Campbell and other “champions for better news” are absolutely necessary for the betterment of all.