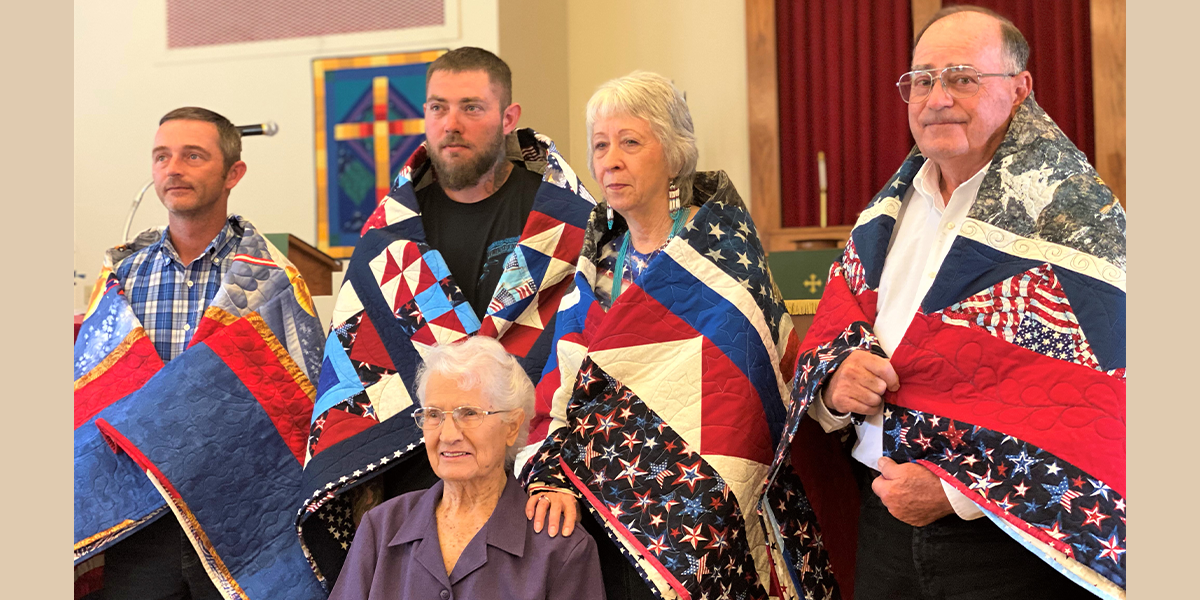 Four Quilts of Valor created and donated by Gloria Peck (front) were presented to local veterans on July 24 at the United Methodist Church in Eads. Veterans receiving Quilts of Valor are (l to r) Tim Green, Mike Walsh, Areta Blooding-Laird and Roland Sorensen.

FOUR MORE QUILTS FROM GLORIA PECK TO THE VETERANS

Gloria Peck is known in the community as a prolific quilter who has probably pieced together hundreds of quilts over her lifetime.  In recent years she began working with the Southeast Colorado Quilts of Valor organization.  Within that capacity, Peck and many other talented quilters have pieced together, lovingly quilted and then presented a number of quilts to our local veterans.  Last week, four of Gloria Peck’s most beautiful quilts were presented to four military veterans at the United Methodist Church in Eads.

Laird served the United States of America from June 1967 thru June 1970.  She served as a corpsman. After these two stints she went into the Naval Reserves and served 22 years and during this time her medical unit was called to Desert Storm. She served 3 months in Bahrain, Iraq. She retired in September of 1991.

Sorensen served the United States of America from April 1968 thru May 1971. He was an instructor for the Pershing Missile Operation and was stationed in Ft. Sill, OK.

Walsh served the United States of America from 2004 thru 2006 in Kabul Afghanistan in the USMC as a Marine. Mike was a Marine Corps Machine Gunner 0331 and a 6199 Aerial Observer Gunner.

Greene served the United States of America in the Navy from September 5, 2001 through September 2005. Tim served on the USS Kitty Hawk and maintained the ship's warning, alarms, and navigation systems.

The Quilt of Valor’s main goal is to award comfort quilts to our Veterans to say thank you for their dedication and Valor. But Quilt of Valor also wishes to appreciate and honor those who have gone above and beyond in support of the foundations mission. A presentation about Gloria Peck was then made with the following text read to the audience that outlined the significant achievements Peck has made for the community:

From the words of her husband’s eulogy, “For those who fought for it, Life has a flavor the Protected will never know. Clayton Peck was a decorated Korean Veteran.”

The best way to describe Gloria Peck is to say that she has set her mind and devoted every ounce of her being to being a good steward of the statement in Clayton’s eulogy. She may not have served in the military to protect our freedom and this country, but Gloria Peck has certainly been a good steward of those who have fought and died to preserve our freedoms. She has served this country by her service to her area surroundings, her county, her city, and most importantly, her beloved family. Gloria has determined to take advantage and make available to many the Magic of Ordinary Days.

During her professional career of 35 years, Gloria, was known for her professionalism, being meticulous in her paper trails, her office management, and getting things back on a good financial track.

A person only has to be around Gloria a short while to know that the main focus in her life has always been her family. Her and Clayton’s proudest accomplishments are Kim Peck and Kip Peck and their families.

Kim has conveyed his fond memories of his Mom as being relentless in her career and being excellent at her positions all the while sewing for the family and creating crafts to decorate their home, making Christmas decorations of all kinds, other holiday decor, ceramics and macramé to list a few ways in which she decorated and filled their home with love.

He recalls that Gloria and Clayton were both heavily involved in summer baseball, football, and wrestling. Kim credits his parents both with instilling in him a very strong work ethic; however, he’s not too sure he got the strong ethic of a great paper trail but, he’s still working on it. Kim credits his raising for the belief that he has courtesy and respect for all-- from the ditch digger to the President. He says that while he was a child in his parent’s home growing up that he and Kip were loved, had food on the table, clothes on their back, and a roof over their heads. Kim believes he and Kip were raised right! His parents wanted the best for them and have worked so hard to try and accomplish that for him and Kip.

While visiting with Kip, he conveyed that his Mom taught him the value of LIFE!! And like Kim, his memories are tied back to the great teamwork between his Dad and his Mom.  They were taught to respect everyone, help family and friends when called upon. He remembers his parents being highly involved with 4-H, roping club, and baseball.  He shared a memory of one time he was in need of some help when he was the Tournament Director of the summer baseball program. So, Gloria, became the Assistant Director and in Kip’s words, "She just baled in there and got things done!" Together, they were able to host two very successful State 13-15-Year-Old Babe Ruth Tournaments. Kip said she just kept me in line as to what was going on and what we needed to do, and it all went smoothly. He says that his Mom doesn’t want the limelight on her but on someone else. To this day Kip cannot call his former teachers and administrative staff from school anything but Mr. or Mrs.  He was taught don’t ever miss the opportunity to give those in your lives their due respect. Kim and Kip’s Dad served in the Military and taught them to stand for the flag with hats off while standing for the flag. They were taught to respect those who served this country in the Military and those who gave their lives to give the honor due.

I know from enjoying the family history Gloria has put together for her family, she has had an active participation in instilling those same values to her grandchildren and great-grandchildren. I've delighted in reading about the music lessons given. I've loved listening to Gloria talk about various projects with the great-grandchildren in helping to get them ready for the Fair. The quilts she has bestowed on her family will always be treasured and I know that the quilts she has donated to physically challenged children in Colorado hospitals have been snuggled in until worn out!

When Quilts of Valor was forming in Eads, Gloria jumped in head first!!!! She donated 2 quilts to be awarded out of the 10, helped contribute to a third and the setting together of it, and went all over making sure the 10 awardees received their due quilts even though this country was in the middle of the COVID pandemic crisis. She enthusiastically embraced the challenge and forged ahead. This year, for the 2021 awards, Gloria has contributed these 4 quilts, and Marilyn Hagans has quilted them.

There is no way to express all the things this lady has accomplished in her life, her determination to live correctly and teach correctly, to honor the fallen for our country, and honor the ones who have come home after serving our country. Gloria is a perfect example of a parent who has taught the right things, involved herself in the right things, and lived her life in such a way to be a good steward of the sacrifices made so that we may all enjoy the Magic of Ordinary Days. May we all go from this place and determine to follow the example of the four Veterans who chose to defend this country in the way asked of them,  let us square our shoulders and forge ahead the rest of our lives in the manner Gloria Peck has and to be a good and faithful steward of the freedoms given. Gloria, it is the privilege of Quilts of Valor to present you with this certificate of Appreciation.

Presenter Tila Dunn explained the beginnings of Quilts of Valor at the end of the ceremony, “Quilts of Valor was formed in 2003 when a quilter Mom was faced with the reality that her son was on the front lines in Iraq and was daily witnessing the terrible events of war.  She had an understanding of how a quilt made with love could comfort, so she made him a quilt and sent it to him. He loved it and his fellow Veterans in his unit did as well! Very soon because of all the interest and comfort those using it had, the quilt was in tatters.  This Mom rounded up her quilter friends and started sending comfort quilts into that war. In her mind, quilts equal healing. That is our desire, to offer comfort and healing to our veterans and to say thank you for your service.”