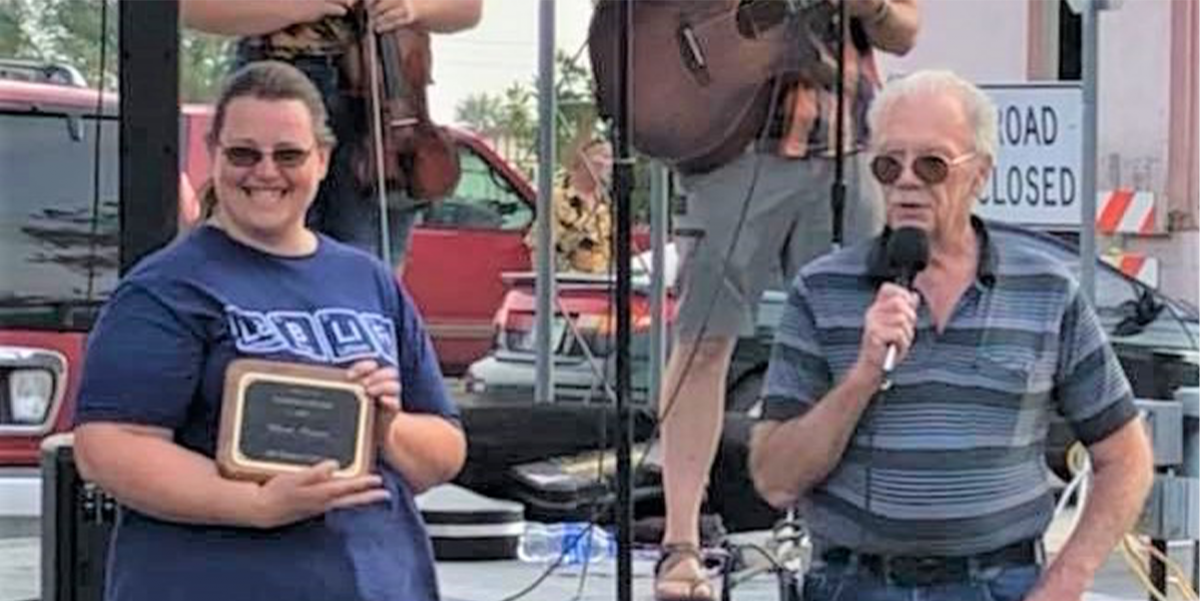 Gloria Trosper of Eads receives her recognition as the Volunteer of the Year from Dennis Pearson, President of the Eads Chamber of Commerce. The award was given during the Maine Street Bash in Eads on July 31, 2021. 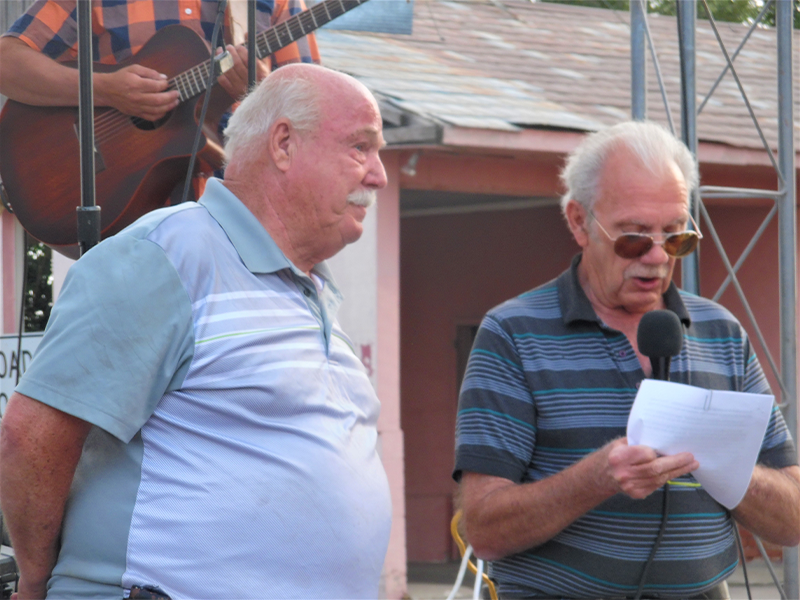 The nominator for the Citizen of the Year Award wrote, “Terry Riley moved to Eads from Denver when he retired as a First Responder more than 10 years ago.  He grew up in California but has come to love the rural life in southeastern Colorado and particularly in Eads.  Terry has shared his extensive knowledge learned in former jobs with the community of Eads.  He has a pyrotechnic license and shot fireworks at Bandimere Speedway for many years during their 4th of July events.  He has also worked as a fireman and first responder in the urban areas.  His main hobby is lighting and sound production as he also worked for some years in broadcast.  Luckily for Eads, Riley has brought these extensive skills to the community and has willingly shared them.  These are skills that not everyone has or can easily develop, but they have become vital for the community, and therefore we are lucky to have Terry share his extensive abilities to our organizations.”

As a volunteer Terry runs the big stage at every Crow-Luther Cultural Events Center (CLCEC) Maine Street Bash.  He has been so successful with this endeavor that multiple area communities have either asked to hire him for their events or asked him for advice and expertise.  Riley shares his knowledge willingly.  He serves as a board member and technical director at the CLCEC/Plains Theater in Eads.  He’s on the board of the Kiowa County Fire Protection District.  He shares his sound equipment and abilities with the many churches in town.  Finally, Riley serves as a board member on the Eads City Council.

All of Riley’s work has been mostly voluntary as he willingly offers up his knowledge and extensive skills in the many areas that require this expertise.

Gloria Trosper was named Volunteer of the Year for the impressive work she does in the community within the health industry, 4-H organization, school organization, and within non-profits in the county.  Her nomination listed the extensive work Trosper does with the Kiowa County Hospital District.  She is a full-time employee managing the Lab where she is often on call during off hours.  There have even been times where Trosper has been called out of church in order to go to work.  During the pandemic, Trosper was in charge of the COVID testing and worked long hours making sure that service was completed accurately and professionally.  In addition, Trosper, along with KCHD district bookkeeper Shannon Dixon, has organized the annual Health Fair in Eads for many years.  This is a vital service for anyone in the area who comes in and gets their blood drawn, vitals checked, heart checked and also receive a wealth of health tips and information.  The Health Fair takes major organizational skills that Trosper and Dixon have performed successfully for years.

Trosper is also a 4-H Leader for the Prairie Queen 4-H Club where she spends hours planning to teach the children, ages 4 and up, the many skills 4-H offers.  These include crafts, cooking, and recently even making homemade ice cream.  Within her 4-H leadership, Trosper also takes the lead in the 4-H Concession stand which is a benefit to many organizations including the Kiowa County Fair & Rodeo each year.  This is the 4-H organization’s main fundraising activity and Trosper continues to play a major role in the success of this service.  The Prairie Queen 4-H Club also volunteers a couple of weekends each year as managers at the Plains Theater.  This is a service that is vital to the Crow-Luther Cultural Events Center in order to keep the movie theater open and operating smoothly.

Trosper also participates in the annual Christmas Cantata.  She and her husband Tim are members of the Eads FFA Alumni group that raises money for the FFA Chapter activities.    This work also ensures that FFA gives deserved scholarships to local graduating seniors who have been active in FFA.  Finally, Trosper’s active family of four girls are very involved with every aspect within the school district and participate in sports, concerts, clubs and whatever organizational fundraising opportunity they can help in.

According to McLoud, Jennifer Schofield’s hard work and success in keeping her business open during the devastating year of the pandemic deserves recognition as “Business of the Year.”

JJ’s Restaurant is a favorite place of many people to dine in Eads.  Schofield provides several local jobs and offers a large menu of sandwiches, steaks, chicken, salads and desserts.  JJs provides a comfortable backroom area for local community groups to meet and enjoy drinks or a meal at the same time.  Several groups do meet there weekly or monthly including the Eads Chamber of Commerce, Weisbrod Hospital Auxilliary and prayer groups. 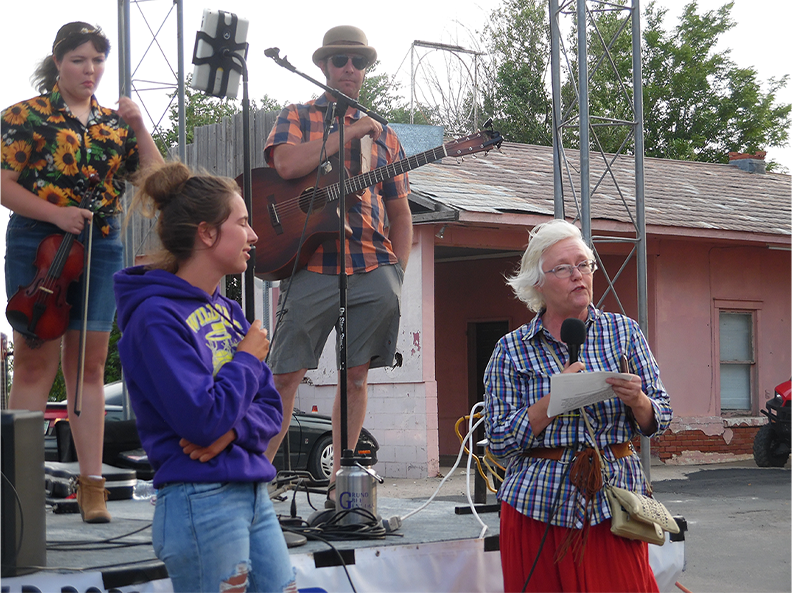 Cindy McLoud (right) Directory of the Kiowa County Economic Development Foundation presents the Business of the Year award to Stacy Schofield who was standing in for her mother Jennifer Schofield, owner of JJ's Restaurant in Eads. - Doris Lessenden

JJ’s also caters for parties and events.  In recent years their catering service for the Annual Veteran’s Day Dinner has grown so big that they have had to cater at the community building and then again at the restaurant for the various involved groups.

Many days, one can see horse trailers and pickups parked outside of the restaurant as JJ’s is a sure stop for the branding crews, harvest crews and construction crews.  They often times box up large amounts of food to be taken out to the fields during harvest.  JJ’s also hosts various sports teams in their team dinners.  They recently added a big screen TV in the main dining area so fans could watch the Eads Eagles during their livestreamed games.

Schofield graduated from Eads High School in 1989 and then attended Alamosa State University.  Her family includes son Jonah who graduated from Eads, as well, and Stacy, who is still in school.  Jennifer also has a large extended family in the community who has been significant help to her as she battled to keep the restaurant open during mandated closures and controlled re-openings.

The recipients of the community awards will be honored participants in the Kiowa County Fair Parade on Saturday, September 11.