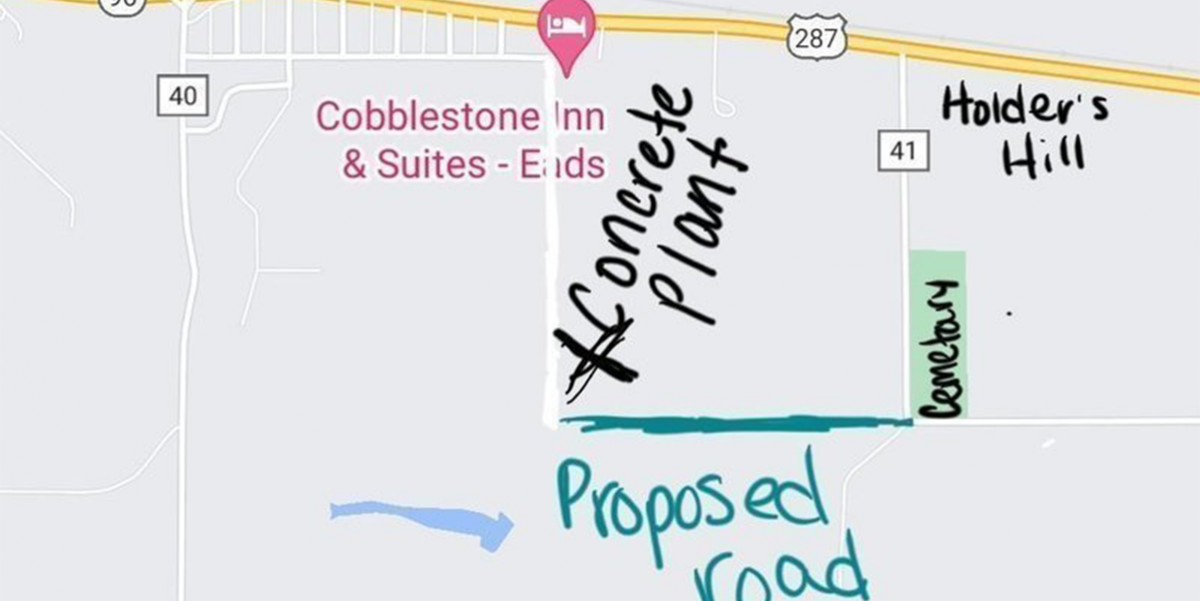 Roads provide access to the outside world or, even just to the store around the corner.  They take farm produce to shops and children to school.  Roads are the outlet of life’s activities; they make a crucial impact to the economic development and growth of any area and bring important social benefits, as well. They open more areas and stimulate economic and social development, for those reasons, road infrastructure is the most important of all public assets.

There has been some talk within the Eads community that a new road should be built connecting South Rittgers Street at the cement plant to County Road R.  This would run directly behind the Eads Ag Farm, and to the Cemetery Road.

Eads resident Teri Ellis has created an informal petition at www.change.org in order to “stir up the community’s interest in the proposed road.”  Teri states that the feedback she got on social media was tremendous, and she received support from almost everyone. She states, “Our community recognizes the dangers of that intersection.”

It has been noted by Kiowa County Administrator, Tina Adamson that, “This idea has been presented to the commissioners in the past and the idea was met with considerable opposition, so they did not pursue it further.”

However, time has passed, the needs of our community have changed and the economy in Kiowa County demands that infrastructure be created for growth. So, maybe the time is now. With the possibility of future building projects in that area of the Kiowa Creek Commercial Properties a road may be inevitable at some point.

With both the Kiowa County Hospital District and the Kiowa County Fire Protection District in talks of possibly building new facilities in the future in this area, a road would serve as a vital need for access in and out of their properties.   Already, a new road was developed a couple of years ago when the All-Rite Paving and Southeast Mental Health was built.  The new road is an extension of Rittgers Street and extends south clear down to the cement plant.

There have been concerns from parents whose children drive sometimes 2 or more times each day to the Ag Farm in order to care for their FFA animals.  Highway 287 is increasingly busy, with traffic not slowing down for anyone, and it can sometimes feel unsafe making the turn off 287 or back onto it.

Funeral processions create traffic congestion down 287 as the friends and families of loved ones make their way east out of Eads to County Road 41 to the Eads Cemetery.  The new road that is proposed could serve as an alternate route to the cemetery which would decrease the traffic congestion through town on highway 287.

The State of Colorado Department of Transportation has plans of installing passing lanes starting at “Holter Hill”. This could potentially make turning on to or off County Road 41 more difficult than it already can be.

So how does the idea for a new road become a reality?

This road has not been platted on the Kiowa County Platt map, and the path to a new road is not as easy as one may think.  The land cited by the red line in the photograph, belongs to Kiowa County Economic Development Foundation (KCEDF) as part of their Kiowa Creek Commercial Properties and they would need to give the right-of-way to Kiowa County to build and maintain any road put on this property.

The road would not be considered by the Board of County Commissioners until there was a formal request by way of petition and/or letters from Kiowa County residents. The proposal would need to be spearheaded by someone or a group of individuals willing to take on creating and gaining signatures on a petition in which would be presented to the commissioners.  All signatures and/or letters must be from Kiowa County residents only.

After a formal request is made and all signatures and letters have been verified, the county would check with the landowners for right-of-way permission.  Then there would need to be public hearings and a review by the Planning and Zoning Board before the Board of Commissioners would vote on the issue.

Tina Adamson also indicated that, “We can add roads to our county and receive funding from the Highway User Tax Fund according to the type and condition of the road.” While Mrs. Adamson did not have an estimate on what the building of such a road would cost, it appears that there could be help funding its construction.

With the infrastructure in place, the area south of Eads could be more appealing to potential buyers who wish to build there.

Ellis thinks the really crucial thing is to not let this idea fade away and then have to face it sometime when there is a tragedy.  As one of the comments from Ellis’ project page states, “It’s long overdue and a safety measure for our community.”