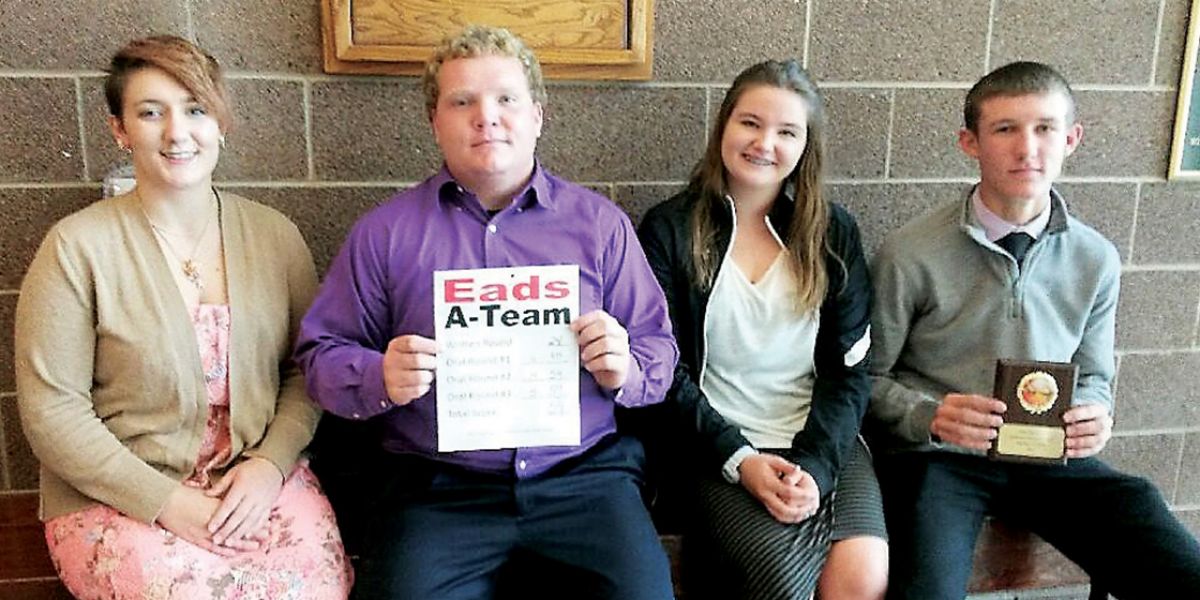 The high school knowledge bowl season started on a good note for the Eads High School teams when the varsity team members placed at both of the first two meets and the B team members won their division at the first competition.

The Eads teams traveled to Swink for the first meet of the year. There the Eads varsity team of Zach Haase, Trey McDowell, Madison Kelley, Emily Gyurman, and Kaycee Ellenberger had a less-than-spectacular written round score and started the oral competitions in the middle of the 15-team pack.
The team made up for the slow start during the oral rounds by scoring in double digits in all three rounds. The team had solid 11-point performances during the first two oral rounds, then scored an impressive 16 points during the third and final oral round.
When the competition ended, the Eads team was solidly in third place behind two varsity teams from Lamar. They finished a mere two points behind the Lamar Orange team and 10 points ahead of the next team from a 1A school.
The Eads B team had an excellent outing. Team members Joe Haase, Hatch Nelson, Amber Kopasz, Mollie Kelley, Blake Stoker, and Bradley Musgrave had a good written round score and went into the oral rounds one point behind the leading B team.
They proceeded to dominate the B team competition, scoring 12, 15, and 13 points in the three oral rounds. Their final score of 67 points put them ahead of the second place B team by 16 points.
Holly hosted the second meet. There the Plainview varsity team of Benji Davis, Olivia Specht, and Grant Specht and the B team members Kyle Scott, Lydia Splitter, and Kayla Wanderlingh, joined the Eads students in representing Kiowa County.
Unlike the Swink meet, the A and B teams competed directly against one another at Holly. The Eads varsity team of Zach Haase, McDowell, Madison Kelley, and Gyurman had a better written round score and the Plainview team was close behind them.
The Eads team had two solid oral rounds, scoring 16 and 14 points, but went into the final round in the unenviable position of competing directly against a very strong team from Lamar. The team struggled to buzz in fast enough to beat the Lamar team. When the competition ended, the Eads team had to settle for third place once again.
The team from Plainview had a decent written round score and three good oral rounds. This allowed them to finish the competition in fourth place
Eads was able to enter two B teams in the meet. The all-freshman team of Joe Haase, Nelson, Kopasz, and Mollie Kelley had a good written score, then scored consistently through the three oral rounds despite competing directly against varsity teams from other schools. They finished the meet just out of range of a trophy, one point behind the third place B team.
The other Eads B team consisted of Stoker, Musgrave, and Ellenberger. They had a decent written score and two good oral rounds, but struggled during the final oral round and finished in sixth place in the B division.
The Plainview B team had a decent written round score, but struggled during the first oral round. They could not recover from the dismal first oral round and finished in the middle of the B teams.