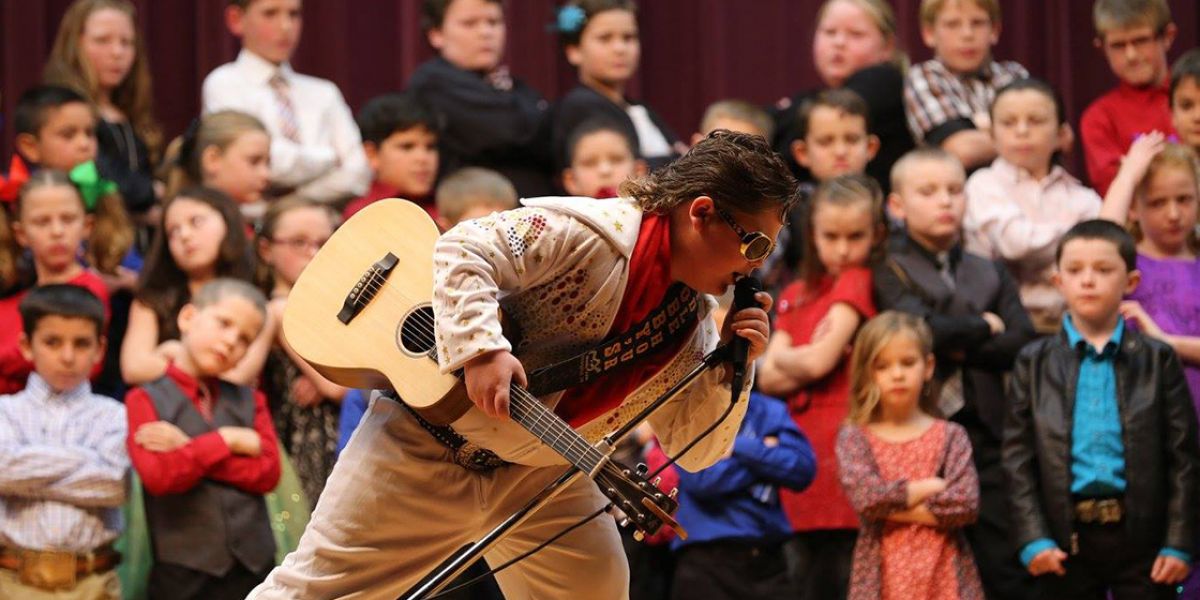 EADS ELEMENTARY CELEBRATES CHRISTMAS WITH PERFORMANCE OF “The Elves Impersonator”

A large contention of Eads Elementary students, under the tutelage of music teacher Monica Uhland, presented “The Elves Impersonator” musical to a packed crowd on Thursday night. Year after year, Uhland has come up with interesting and fun productions that brings the holiday season to light in a number of ways. This year, the fifth graders were in charge of the musical production taking the main parts while the rest of the elementary grades (K-4) did an excellent job of singing such songs as, Our Favorite time of Year, Elf Impersonator!, Green Elf Shoes, and Santa Claus Rock.”

Three students entertained the crowd with solos including Spencer Uhland, as Elfis, who sang, He’s so Blue; and Alessandra Paez and Kyle Jones singing, Arm in Arm.
Uhland, as Elfis (Elvis) and Garret Williams, as Santa, also entertained the crowd with a little bit of a solo dance.
Other cast roles included Santa’s Elves (Stockton Mitchek, Aaron Musgrave, Kadan Dunlap, Koree Ellenberger, and Case Nelson) and Santa’s Reindeer (Megan Scranton, Kierra Coen, Katherine Trosper, Zoie Arnold).
The night began with the fun and never-a-dull performance by 25 active and precocious students representing the preschool crowd. They were directed by Jill Williams and Kayla McLoud. The little guys started out with reindeer antlers and quickly advanced to jingle bells ringing loudly and brightly.
The final performance was new this year as Uhland directed three classes, separately, on the recorders, including a third, fourth, and fifth grade performance. These skills are the beginning foundations of learning how to play an instrument.
All in, the 2017 edition of the Eads Elementary Christmas Concert was another rousing and exuberant success.