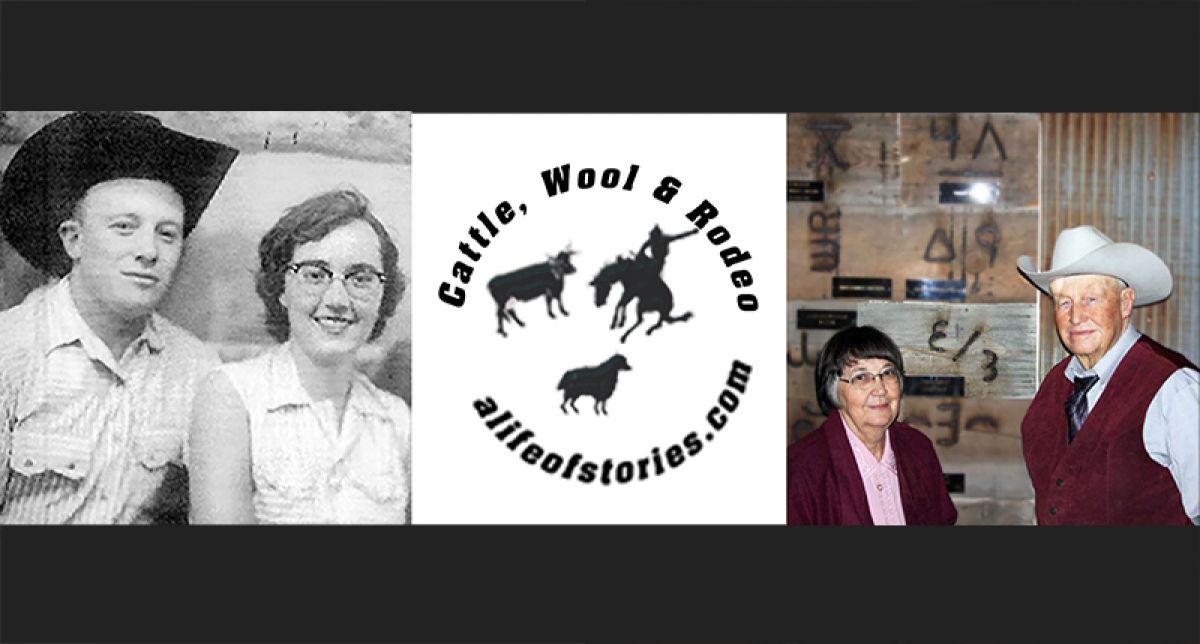 Sometimes getting together this blog of my Mother and Dad’s life stories, deciding in what order is a dilemma. Which came first the chicken or the egg, or in this case the rodeo or the wool?

My dad’s family ran sheep when he was young, so I will start with the wool (sheep). Wool was in demand for the winter clothes of the armed services during World War II. The pastures on granddad’s place, south of Holly, were large and required a herder to be with the sheep to get them to the water tanks and protect them. Dad and his older siblings each took a day of the week during the school year to herd sheep while the others went to school. One of the things that amazes me about dad’s family is they all graduated from high school, in spite of frequently staying home and working on the ranch. This was in the 1940s and the 1950s. Maybe it was because school was a nice break for them?

In her writings of 1949 Mother stated she had met her “cowboy”. When Dad and Mother got married, they lived in a two-room house on the Dorenkamp ranch, “uphill” from Grandma and Granddad. There was no electricity or running water. Mom wrote that “they had lived there for five years and just before their third child, our only daughter was born, Dad Dorenkamp moved an old house from another site on the ranch and added two rooms to that house”. Four rooms, three kids and still no restroom, but there was running water and electricity. Mother said in her writing she did not know why she didn’t insist on the bathroom.

I do remember not having an indoor bathroom, because one night I was crying that I needed to go to the bathroom and mother was so upset that she had to take me outside in the night. I can’t imagine why! She didn’t take me clear down to the outhouse, she made me squat right outside the door. That and watching the outdoor toilet being moved. They had to dig the new hole, pick up the wooden outhouse, move it over the new hole and then bury the old hole. I remember them pouring in lime and the awful smell.

Dad worked on the ranch and I remember it being a great time with a lot of family get-togethers and working together. I was carefree and young, not even five years old.

The year I was five, with two younger brothers having been added to the family, our family moved to an irrigated farm north of Granada. We were nearly neighbors to dad’s brother Bernard. This all is leading up to my mother’s writings (1960) where she wrote “soon after we moved there Fred went to a sale in La Junta with his dad. He called and said they had bought some sheep. “We didn’t have a fence on the farm that would hold a wild bale of hay, let alone sheep. We bought a big old barn and had it moved on the place and fenced the whole farm”.

The barn worked well for the sheep. It was where the wooden jails which were about 4’ x 4’ could be set up and taken down as needed. The jails, as we called them, were used to put each ewe and their lamb(s) together as the lambs were born. After each ewe decided that she would take her lamb they were painted with the same number and put back out into the big herd leaving room for another ewe and her lamb to be “jailed”. This continued until the entire flock was lambed out. Lambing season was an all day and all-night monitoring process, frequently in freezing temperatures. At night Mother and Dad took turns going out and checking for newborn lambs. There were many times that we had baby lambs on the floor in front of the stove trying to get them warmed up and helping them survive, all the while hoping that the mother would accept them when they were taken back out.

Over the years there were numerous bum, or orphaned, lambs. We would feed those by bottle. The bottles were old Coke bottles with black nipples on them and filled with warm milk replacer. There is no odor quite like milk replacer or the joy of getting the powdered milk replacer all over you as you were trying to mix it in a bucket. The little lambs were cute and quickly would become demanding as they learned how to drink from the bottles. As the lambs got older and stronger, if you didn’t hold the nipples right, they could pull the nipples off the bottle, dump the whole bottle of milk and a new one would have to be made. Feeding orphans was time-consuming, but also rewarding. Saving these baby's lives was a special feeling.

The old barn also worked well for sheep shearing. The wool was an important and valuable part of raising sheep. The sheep shearing crew would arrange jobs with several sheep growers in the area. When they were set to arrive at our place all the sheep were gathered and ran through the barn and the shearers worked fast. A tall wooden pedestal was set up to hold the big burlap bags into which the shearers would toss each fleece of wool. Us kids stood in the burlap bag and stomped on the wool to pack it.

Shearing time doesn’t hold especially fond memories for me. The sheep shearers would act like they were going to come after my long hair with the clippers, and they would just laugh. Also, you would come out of the burlap bag where the wool was smelling like lanolin and sheep and probably with ticks on you.

When I was visiting with Dad about the sheep and told him my memories of the sheep shearers, Dad asked me if I remembered leaving the water in the sheep tank on and it ran underneath the stack of wool. I told him no, I couldn’t possibly have done that. He said I sure enough did, and this is their story so I must include that memory.

Dad said wool buyers would come inspect and grade the wool. Wool free of foreign matter, like cockle burrs and weeds, and with finer strands, usually based on the breed of the sheep, resulted in a better grade, and more valuable wool. I’m fairly confident the year that water ran under the wool bags was not a good year for the wool value.

Having the sheep played a large part of us older kids learning to ride horses and the joys of taking care of animals that I swear sometimes would rather die than live. There were alfalfa fields around and of course they had to crawl through the fences. Alfalfa fields at the right stage were deadly to sheep and would cause them to bloat and die. Poking them in the side of the belly with a big needle was not fun at all. Through no fault of their own they were also very susceptible to dogs and/or coyotes getting in their pens and pastures, causing havoc and gruesome deaths. Then sometimes a sheep would just decide to lie down and die.

During the summer, Dad ran our sheep down between the Buffalo Canal and the Arkansas River. My brothers and I, as well as Uncle Bernard (who passed away from cancer in 1962) and Aunt Louise’s kids, spent hours in that pasture herding sheep. We had to stay with the sheep because of the dogs and coyotes, and also make sure they did not crawl through the fences. The sheep were trailed out of the pen each morning and back in by nightfall.

And that sets up Part two of this story that will begin in the year 1965, a year that was not friendly to sheep.