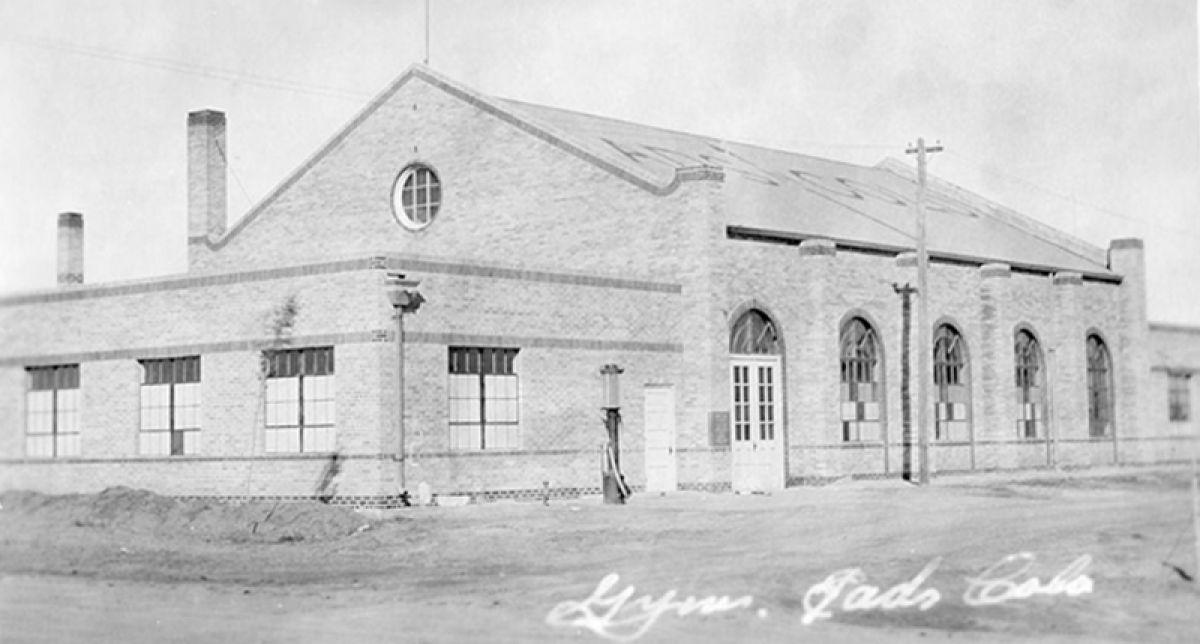 Kiowa County School District RE-1 is pleased to announce the completion of the rehabilitation of the “Old Gym,” a significant structure on the campus of Eads schools.  Thanks to grants from the Colorado State Historical Fund (SHF) and Department of Local Affairs (DoLA), which made the rehabilitation of this local icon possible, students and community members will continue to utilize the gym for many years into the future.

Phase I of the rehabilitation, also funded by SHF and DoLA, was completed in 2017.  Phase I included construction documents, HVAC and electrical upgrades, and rehabilitation of the historic steel windows.  Phase II began during the summer of 2018 with exterior rehabilitation, which included: adding protective coverings to protect recently restored windows; repointing and repairing cracks in the masonry for the whole building; replacing non-historic, leaking doors with new, historically accurate, weather-tight doors; and replacing deteriorated fascia to prevent water leaks. During the summer of 2019, the interior of the gym was repainted after ceiling and plaster repairs were done.  ADA accessibility, updates to plumbing, and plaster repair and painting of the boys locker room and weight room also happened in 2019.  Likewise, the girls locker room was painted and work addressed ADA accessibility and plumbing upgrades during this past summer.  The school was fortunate to again work with several excellent contractors during Phase II of this project:  A&M Renovations, Adams Electric, Barnett Construction, Dan Hedrick Restoration, Eastern Plains Plumbing, Form+Works Design, KH Painting, Drywall & Seamless Gutters, and Summit Sealants.  All work from Phase II met the Secretary of the Interior’s Standards for the Treatment of Historic Properties.

While every student that has attended school in Eads has memories of the old gym, the building has an interesting history as well.  In the spring of 1927, the school district received authorization to construct a new gymnasium to serve as the school (and community) athletic facility and provide space for Domestic Sciences, Manual Training, and bus maintenance and storage.  Community members and school officials agreed the building should be fireproof and economical; consequently, the district purchased recycled brick and steel from the Lamar Sugar Factory, which substantially reduced the cost of construction.  Architect Elmer E. Nieman designed the building, and local citizens Merle Mahan, George F. Morton, Calvin A. Benner, and his son, Bill Benner, helped build the gymnasium.  When fall classes began in 1929, the Mission Revival-style gymnasium was available for student use.  Between classes and athletic practices, students of all ages utilized the building for the majority of every school day.  Recognizing the importance of the gymnasium to the community, the school board also allowed the public to utilize and hold events in the building.

The Eads School Gymnasium was listed on the National Register of Historic Places in August 2013.  Significant at the local level in the areas of Entertainment/Recreation, Education, and Social History, the building has been important to the community since its construction.  It was the only local gymnasium until the completion of the current high school gym in 1963.  In the area of Education, every student in the district has completed elementary physical education in the gymnasium for almost nine decades, while high school and junior high athletic teams use the building daily for weight lifting and practices.  For many years after its construction, the building also housed other educational programs of the school, such as Domestic Science/Home Economics, Auto Mechanics, Music, and Drama, which were considered important components of modern curriculum.  Additionally, many important school events and activities took place in the building, including concerts, plays, assemblies, holiday programs, dances, and graduations.  In the area of Social History, the federal welfare program used the building during the Great Depression to prepare surplus foods to supplement student lunches. Since its construction, the building has undergone some renovations, including blocking in windows on the north and west elevations and closing in the stage for use as physical education equipment storage.  In summary, the Eads School Gymnasium is a significant, highly visible, regularly utilized building for students and citizens in the community presently, not just historically.

This building’s rehabilitation has been successful from several perspectives.  The energy efficiency of the building has increased, historic elements were rehabilitated and preserved, and maintenance issues have been handled.  Additionally, the school district and public have seen this happen in a timely manner.  The partnership between SHF, DoLA, and the school district worked well, as did the coordination of work with all people involved.  Rehabilitating the Eads Gymnasium has demonstrated that historic preservation is a viable option for our community to bring life back to our historic buildings.