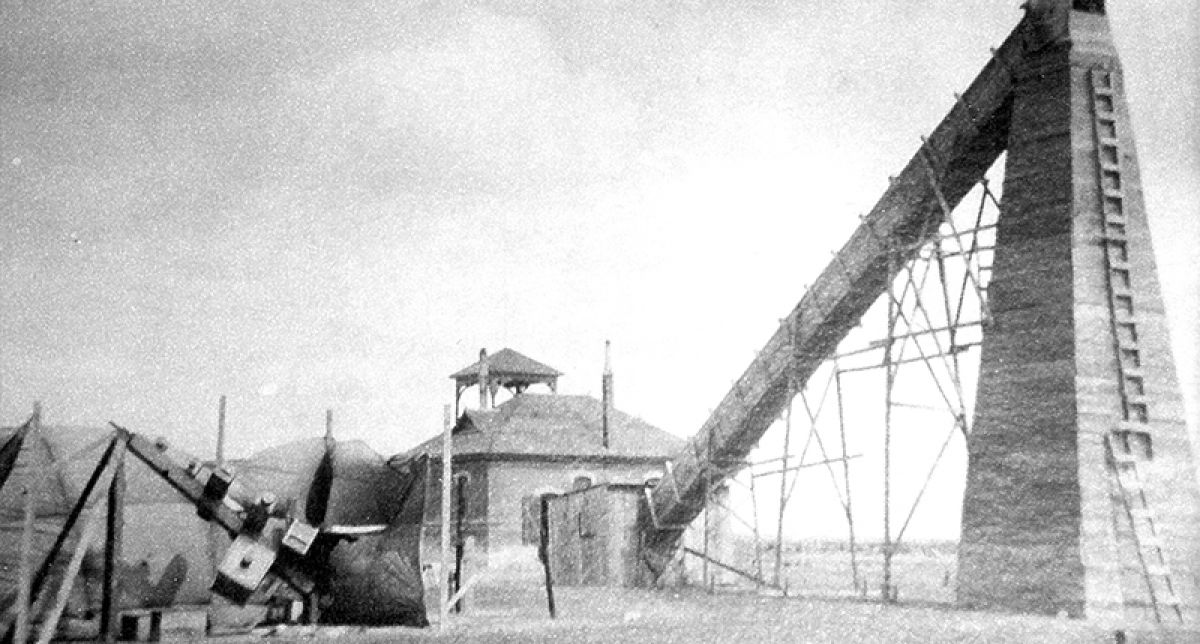 LONG TIME GONE & THE STORY OF THE BRANDON OBSERVATORY

NOTE: The following article was first published in the Independent at the beginning of 2020.  However, recently some of our readers came across the referenced photo in this article and a discussion ensued on social media.  The Independent is very happy to reprint this story about a surprisingly interesting event that occurred in Kiowa County more than 100 years ago.  –For Rob who first asked the question.

The longer I live here, the more I’m surprised by just how many times over the past century this lovely, sprawling county that averages (more or less) one very friendly person per square mile and is almost 200 miles from the closest city has ended up in the pages of major newspapers across the country.

There was the “Coup led by Councilmen’s Wives”.  The “Colorado Deputy Sheriff Coral Hickman Gunned Down by Bank Robbers on the Run.” The follow-up story revealing “Posse Traps Ruthless Manter Gang in Kansas Farmhouse”.  And let us not forget “Remains of Human Bones Found in Furnace Of Rialto Hotel” that was undoubtedly responsible for a few lanterns left burning later than usual at night.

Whether brief or long, Kiowa County has been the focus of attention, perhaps even the topic of a conversation over supper, in homes from New York to Cleveland to Chicago to Kansas City and beyond.  Quite an accomplishment for this county on the High Plains.

But of them all, one of my favorite stories is like something straight out of a Frank Capra movie, and it happened a little more than 99 years ago.

It was late in the afternoon in the beginning of May, 1918.  Another clear, cloudless day as the enormous, sweeping blue sky stretches from distant horizon to distant horizon.

Prairie grasses grow on either side of the dirt road that leads from the golden fields surrounding Brandon to its quiet, broad Main Street.  A few men stand on the porch of the Mercantile; perhaps done, for now, but by no means done for the day. They’ve known each other all their lives and they still…still…have something to say.  One of them makes a quiet joke.  The others laugh—although it’s more of a soft, genuine chuckle than anything.  A horse shakes a fly off his mane and stomps his feet.

In the distance, a train whistle blows.  There are a few glances over shoulders as the train comes into view, but the gesture is more from habit than anything else. After all, it’s just the afternoon train.

What no one in this small town knows—what no one could possibly know—is that the train coming toward them carries six people—six astronomers, in fact.  Four men, two women.  They plan to get off at Brandon, and they plan to stay there for about six very busy weeks.  And they’re not just bringing a world of big cities, and science and discovery and the intellectualism that characterizes who they are as well as where they come from.  They are also bringing to this small town something that all will remember for the rest of their lives.  They’re bringing a glimpse into the celestial heavens overhead.

And, so, the story begins.

Just over 100 years ago, in the late afternoon of June 8th, Brandon, Colorado briefly became one of the most famous towns in the United States.

As those few men and others soon learned, Brandon was the perfect location for the observation of a rare scientific phenomena, an observation that was six weeks in the making and is still referenced in scientific journals today.

What follows is the story of a small farming community that welcomed with open arms a cadre of men and women as foreign to them as the task that brought them there.  The results were not only good for the minds of men but for their hearts, as well.

in honor of the “Great American Solar Eclipse”

The story of the Brandon Observatory

In the beginning of May in 1918, a group of astronomers descended upon Brandon, Colorado for a very specific purpose.  They were there to observe and photograph a total eclipse of the sun and, in so doing, learn something of the nature of the sun’s corona, which is the aura of plasma that surrounds the sun and can extend millions of miles into space.

The eclipse was predicted to occur on June 8th and would begin in Oregon and extend across the United States to Florida.  There were a number of different observation sites along the path, and scientists were stationed at a number of different places.  As is so common today, it had become a race, of sorts, to see which team of scientists could get the best photo.  Well, the team that arrived in Brandon that day had placed all their chips on Colorado which was known not only for its thin air but its numerous clear and cloudless days.  They had also predicted there would be two spots where a total eclipse would occur, with the spots one minute apart in time and ten miles apart in distance.  The total eclipse was estimated to hit Brandon at 5:37 on June 8th and would last for 88.2 seconds.  It would hit the Milton Thompson ranch one minute earlier, with a partial eclipse lasting for two hours.

The team was led by Professor John A. Miller, Head of Astronomy at Swarthmore College in Pennsylvania.  Accompanying Dr. Miller was Professor Cogshell of Indiana University, Dr. E.C . Slipher who was Head of Astronomy at Lowell Observatory, Hazel Brown with Sproul Observatory, Grace Jordan of Smith College and Lieutenant Lawrence Whaler.  The arrival of six astronomers in such a small community would have turned heads any day of the week, but what really got people’s attention was the equipment they brought with them.  It was a camera, and it was 62.5 feet long, worth more than $60,000 and included 12 smaller cameras with it.

When asked, Dr. Miller explained the camera in the most basic terms he could.  “We’re here to take pictures of the sun.”

The people of Brandon were farmers.  They knew about the sun.  They lived their lives by what the sun did or did not do.  But, chances are, this was the first time any of them had considered someone attempting to take its photograph.  Why do that, when all you had to do was go outside and look up?  And how would making a camera 60 feet long really get the photographer that much closer?

But times were much different then.  It might have been expected that the astronomers would be viewed with suspicion, scoffed at or even shunned for their foolishness.  But, according to letters later written by Dr. Miller, that was the exact opposite of what happened.  Instead of mocking or distrusting the scientists for doing something they didn’t understand, the people of Brandon offered their help.

Over the next five weeks, the scientists and townspeople constructed several buildings, including an observatory capable of holding the camera in the correct position to view the heavens overhead.  It was hot, hard work.  After all, this was the High Plains in late May.  But, as time went on, a real bond began to form between the astronomers and the townspeople.  More and more people showed up to help out; more and more the astronomers began to participate in community activities.

One day, one of the townspeople asked Dr. Miller to explain exactly what they were doing.  Dr. Miller was more than willing to do so, and gave a talk to a packed house on Monday night, May 20th.  He supposedly began in the following way.  “Astronomy, the science that studies the celestial bodies, their magnitudes and motions, has come a long way since the Norsemen, who thought the sun and moon were chased by two enormous wolves who now and then nearly succeeded in devouring our sun.”  As the story goes, from that moment on, the audience was totally hooked.

The closer the time came for the eclipse, the more involved the townspeople became, with some of them even being trained to be a “corps of observers”.  As the Westland newspaper of Brandon reported, “No set of men ever worked harder or more faithfully than the eminent Dr. Miller and his crew the five weeks they were in Colorado. Their work necessitated a detail little understood by the common mind.”

For his part, Dr. Miller later wrote, “I cannot express the appreciation I feel for the citizens of Brandon…for their cordial courtesy and helpful interest in our plans.  To mention names of those to whom we are forever indebted would be to mention all.”

As the day approached, a panic set in.   The weather had turned cloudy, and not just a little cloudy but the kind that blocked out any sight of the sky above.  But, as happens in all good stories, the clouds passed, the sun came out, and people prepared for the event.

On June 8th, exactly as predicted at 5:37 in the afternoon, there was a total eclipse of the sun. Some of the townspeople were allowed quick glimpses through the telescope as day turned to night. And the astronomers got photos that exceeded their wildest dreams.  Even Grace Jordan discovered a new star that night, which she named “Aquilla”.  She still receives credit for it today.

With the eclipse having passed, the astronomers—already nationally celebrated for their results-- loaded up their cameras, their equipment and got back on the same train they had arrived on just five weeks before.  But there is no doubt that the four men and two women, just like the townspeople, had been changed by more than just seeing the shadow of the moon on the earth.  In the words of Dr. Miller, “We shall remember long our very pleasant stay in Brandon and the wonderful friends we made there.  They shall often be in my thoughts.”

The next total eclipse is predicted to happen on August 21, 2017.