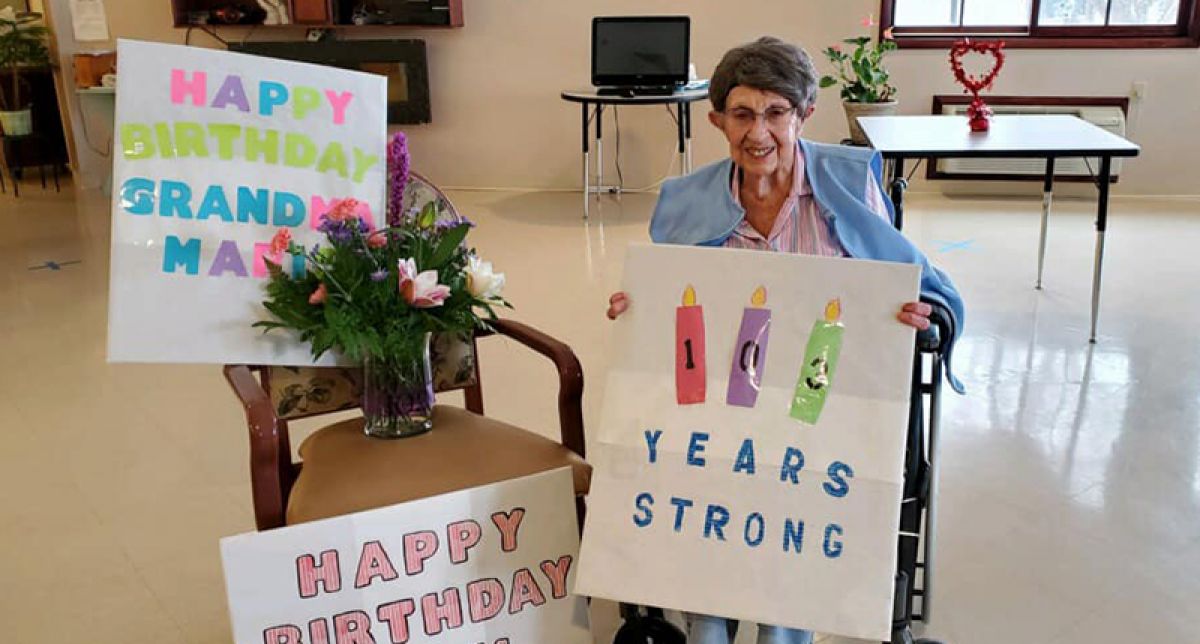 Long Time Gone and the Life of Marie Krentz Thyne

Appearances can be deceiving in these High Plains of Colorado.  A small gathering of snow clouds on the horizon can, within just a few hours, become a blizzard killing hundreds of cattle.  The quiet, unassuming man in worn jeans and resoled boots may be, in fact, the largest landowner in three counties.  A tiny, quiet, humble woman may actually be someone who lived a life full of determination, independence and a self-sufficiency that was against all odds and expectations, at the time.  And, in an even greater surprise, that tiny woman with skin that bears barely a trace of wrinkles and eyes that are clear and bright may also be just a few days away from turning 100 years old.

Such is a description of Marie Krentz Thyne, a centenarian who just turned 103 living in Cheyenne Wells where she’s lived most of her life.

Marie was born in 1918 in Atwood, Kansas. The daughter of Hazel and Lee Kline, Marie was the oldest of 9 children.  Her parents came to Cheyenne County by covered wagon, leaving Marie in Kansas with her grandparents until she finished her first year of school. Meanwhile, Lee and Hazel settled on property south of Arapaho and went about the business of raising cattle.

As a rancher’s oldest child, Marie did all the things typically done by a son as she worked alongside the man she describes with quiet affection as “tall and slender”.  Her earliest memories were of times spent on horseback checking the herd, so little that she rode behind her father in the saddle. No doubt, she still views that role as both privilege and honor. Likewise, no doubt, she carried a bit of authority over her younger siblings, as well.  “They tell me I used to whip ‘em around a bit,” she recalls, with a chuckle.

Even with her duties on the ranch, Marie continued her education. “We had a little country school I went to,” she says.  “I remember riding a horse to school, and, sometimes, we went in a wagon pulled by a team.  The older boys took care of the team once we got there, though.  Both there, at school, and at night.  I started freshman year, but then I quit. Whenever Dad went out with the corn sheller, I stayed home to take care of the cattle like loading feed on the hay rack. I do remember that.”  This small woman was, almost certainly, small then, as well.  But anyone who knows Marie can testify that tiny did not preclude being tough.  When asked if life was simpler, she pauses. “Simpler…?  I don’t know about that.  We milked cows every day, brought the milk inside, put it in the separator and then put the cream in ten gallon cans that we took to town to sell.  There were dances, but we didn’t go. At least, not when I was young. But there were times when neighbors got together.  The adults played cards while the kids played games outside like hide and seek.” There was no shortage of hard times, either, including memories of a blizzard that killed 250 head of Kline cattle. “I don’t know if it was simpler,” she says, “but it was very, very different.  You have no idea.”

As Marie grew older, it was only a matter of time before she turned the head of a young man named Fred Krentz.  His family were neighbors and picked her up in the wagon to take her to Sunday school at the Lutheran Church.  Although Marie didn’t speak much of Fred’s courtship, the young man was clearly smitten as evidenced by letters Marie’s son, John, still has in his possession.  According to John, he spoke a great deal about getting married and promised that he would do all he had to do to make sure they would survive.  Dramatic as that may sound now, those letters were written in the 1930s when the land around them was drying up and blowing away in the relentless wind, and the nation was experiencing the worst economic times in history.  After informing Lee, Marie’s father, of his intentions, young Fred won Marie’s heart, and they were married on August 28, 1935 by a Justice of the Peace at the Cheyenne County Courthouse. Thus, a new chapter of her life began.

Marie, who’d grown up working cattle, became the woman of the house while Fred worked the cattle. Her oldest, John, was born in a “big, old two-story house across the street from the Lutheran Church”. Judy, her second, was born at home, delivered by Marie’s father who got the signal it “was time” by a blanket attached to the windmill. Things may have been a little sparse in those early years, but there were tender moments, too, like the nights when Fred and Marie sat on the porch while Fred played the harmonica to pass the time.  Other events were almost staggering in size, like the prairie fire that began in Chivington and, fueled by a wind from the southwest, spread through Cheyenne County all the way to Colby, Kansas.  Both Marie and son, John, have memories of men beating back the flames with wet gunny sacks.  One year later, another prairie fire broke out.  During that fire, Marie fought the flames behind the wheel of a tractor, a move that could have been disastrous when the tractor’s engine died.

There were also heartaches in the Krentz family.  Marie’s brother, Raymond, was killed at the Battle of the Bulge in World War II.  Her other brother, Duane, drowned in a lake on the family property at a family picnic.  Younger sister, Leona, was killed in a car accident as a teenager. But through all of it, Marie went on.  “What else are you going to do?” she asks, not expecting an answer.  “That’s just the way things were.  That’s how things happened.”

In the mid-1940s, the ranch where the Krentz family lived was sold out beneath them, and the family moved into the “basement house” in town, a structure built almost entirely underground with no electricity or indoor plumbing.  Fred, true to his word that the family would survive,   became a carpenter, teaching himself the skill by reading manuals. He eventually opened Krentz Construction.

Over the years, Marie and Fred had eight children together. When the youngest, Ron, was just six years old, Fred was diagnosed with leukemia. He died a long six months later, leaving Marie, a widow with five children to support. Where other women might have given up or married the first man to show interest, Marie, instead, took the Civil Service exam and went to work at the post office. She worked there for the next 17 years. And when a car accident took Ron’s life at the age of 25, she not only continued on, she was a pillar of strength for Ron’s wife, Carol. “If it hadn’t been for Mom and her prayers,” Carol says, “I really don’t think I’d be here, either.”

After years of being on her own, Marie married again to a man named Daniel Thyne. That marriage lasted ten years before he passed away.

In the course of the last century, it’s fair to say that Marie Krentz Thyne has, in many ways, lived the equivalence of several lifetimes.  Fierce in her determination and her devotion to her family, steady as a rock in the most difficult of times, fueled by a faith that is as constant and abiding as anything she knows, this tiny and tough woman remains, nonetheless, like a pool of still water that runs deep.  With close to 200 descendants, we can only hope that some of her heart, soul and true grit carries on in the next 100 years to come.