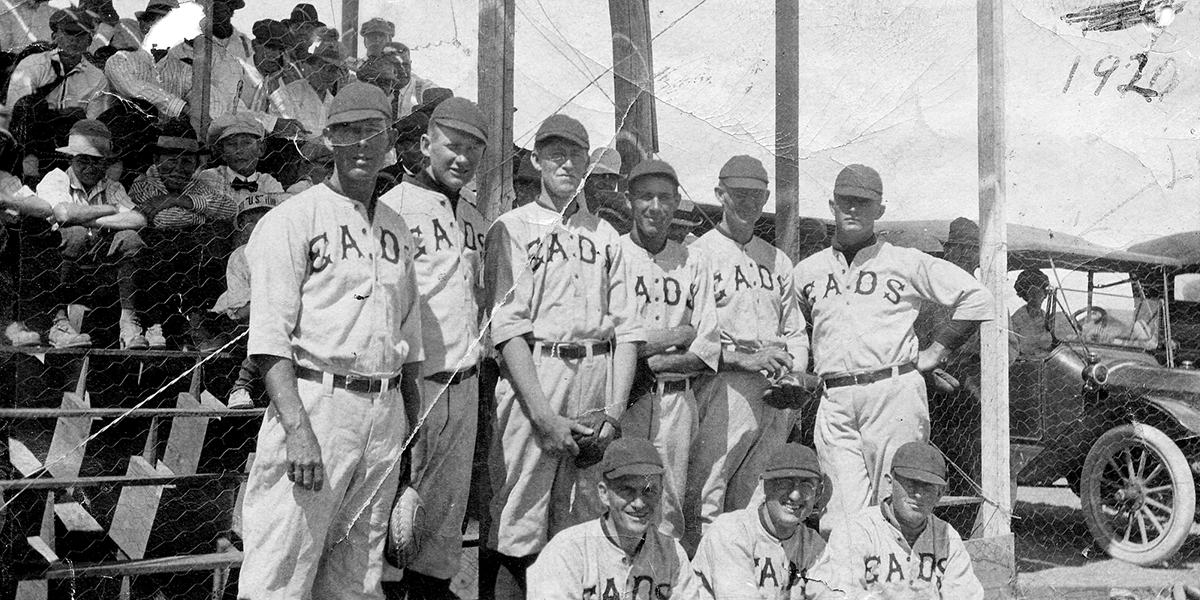 Baseball.  The all American sport. The national pastime that, along with apple pie, has come to define part of our country’s identity and has permeated our language in ways we don’t even notice anymore.  Something surprises us?  “Wow, that came out of left field.” Someone makes a guess that is completely wrong?  “C’mon, you’re not even in the ball park.”  Someone’s putting on a show to get attention?  “Ah, the jerk’s just grandstanding.”  We come into contact with a powerful person?  “I’ll tell you, the guy’s a heavy hitter.”

It’s irrelevant that the roots of baseball can probably be found in the two English games “rounders” and “cricket” and landed on the shores of these here United States with the arrival of the colonists in New England.  As far as fans of the game are concerned, baseball was born and bred on American soil and anything else is just a borrowed concept of the same.

That’s not to say that baseball hasn’t changed over the centuries.  John Thorn, the official historian for Major League Baseball, has written about the early 1700s when rules for the game changed depending upon whether it was being played in New York, Philadelphia or Boston.  He describes another version popular in 1885 where the umpire and pitcher partnered up and, as “owners” of the baseball and bat, pitched to two teams of seven players each who’d anteed up a nickel a piece to play.  Any player that scored a run got a nickel in return; any nickels left in the hat were for the umpire and pitcher to keep.  The fact that the umpire called “safe” and “out” was accepted, as long as the calls weren’t too obvious.  And if they were, it wasn’t uncommon for a fistfight to even the score one way or another.

However, by the 1920s, when baseball had really taken hold on the High Plains of southeastern Colorado, the game had matured into being what it largely is today.  And it was a game that just seemed to be made for this kind of country.  Not much equipment.  Teams that didn’t require a number of players.  Rules that were easily explained, easily understood and easy to follow. A field that could be found anywhere. And a season that could be spread out over the weeks to accommodate whatever else was going on.

Teams in southeastern Colorado were formed out of the towns, and every town had a team.  No matter how small the town was, no matter if the town only consisted of a post office and a general store, that town still had its own baseball team, and they all took part.  Eads, Galatea, Sheridan Lake, Brandon, Towner, Haswell, Lamar, Tribune, Bristol, Cheyenne Wells, Kit Carson, Sugar City, Ordway, Holly, Cheraw and others.  There were at least fifteen baseball teams within a radius of maybe 100 miles, and each team made certain to play at least one game against each other.

Back then, baseball was a game primarily played by the men, and it was the ultimate social equalizer. It didn’t matter what each man did for a living off the field.  Farmers, ranchers, teachers, lawyers, bankers, town councilmen—whatever social standing a man might have in town meant nothing once he donned his uniform, pulled on his baseball cap and trotted on to the field. Once there, the only measurement that mattered was his ability to catch a ball, throw a ball, swing a bat and run like hell.

As seriously as the players took the sport, the fans were expected to do their part, as well.  And do their part they did.  The newspapers were full of countless ads promoting benefits held to raise the money for uniforms.  Every week had at least one box supper to pay for what it took to travel to other towns.  There are newspaper accounts of local bands showing up at games and playing music to cheer on the teams.  And every team took in at least one or two young boys who were the “mascots” and ran whatever errands were needed off the field.

Granted, rivalries developed during the season, and it was not uncommon for the closer the towns were to each other in geography, the worse the rivalry got.  In the year 1921, there was no love lost between Eads and Haswell, and it was clear that any game that was close automatically triggered a rematch.  Sheridan Lake and Tribune had a few tense moments that year, as well.

But, as the season wore on, it became clear—even in the newspaper accounts—that no one ever truly lost sight of the fact that baseball is a game and, as competitive as they might be, having fun was still much of the goal.

However, an event happened in the year 1924 that seemed to crystallize just exactly what baseball is about in a way that no one would have wanted or even imagined.

On May 29, 1914, on a road just outside of La Junta, an automobile carrying 5 members of the baseball team from Ordway was in a horrific accident when it was hit broadside by a Santa Fe passenger train just outside of Cheraw.  Ordway and Cheraw had just finished a game and the “Ordway boys” were on their way back home.  “Inability of the chauffeur to see the approaching train is given as the cause of the accident which occurred on a railroad crossing in a deep cut.”  The dead included first baseman Reuben Zinn, 20, right fielder Tony Peters, 24, second baseman Ray Wanstead, 21.  Pitcher Charles Garret, 21, broke both of his legs and third baseman Oscar Gootz, 19, fractured his skull and was severely injured internally.  The only passenger to survive was the mascot, Clarence Molver, who was 11 years old.

The following week, every single newspaper in the area carried an article about the accident. And every single article was filled with condolences expressed by members of opposing baseball teams.  As one particularly astute young man commented in the Brandon Bell, “We played against those Ordway boys every year, all spring and summer. And there is no doubt that they always gave us a good run for our money.  But this week, I know one thing to be as true as true can be.  In the end, we’re all on the same team.”

Maybe it’s that sentiment that makes baseball so all American.  Or maybe it’s the Americans that have made baseball what it has become. I’m not sure it really matters how it got to where it is. All that matters is that whether it’s the love of the game or the game itself, it’s an American pastime that has the ability to unite us all.