One wall of Rob Morlan's preserved food he has stored in his cellar.

LONG TIME GONE and FOR THE LOVE OF CANNING

The pandemic caused many aspects of our lives to drastically change.  The mask mandates, the social distancing, the closing of churches and businesses and schools was enough to make us crazy with fear and, in many cases, frustration.  But for Rob Morlan who lives northwest of Eads, the pandemic was a time of getting back in touch with a long-lost skill that he remembered from his childhood.  It was a time to share that skill with others.  And surprisingly enough, it was a time when Rob learned there were a lot of people ---- a whole lot of people--- out there just as worried, just as bored and just as interested in preserving what we have.

This is the story of the Long Time Gone skill of canning and how Rob Morlan became a Facebook sensation all For the Love of Canning.

The concept of canning, or preserving food for long periods of time until it is needed, evidently was conceived when Napoleon Bonaparte in 1795 offered a reward of 12 thousand francs to anyone who could invent a method of preserving food that could be taken on long marches by his armies.  Nicolas Appert was the winner as in 1809 Appert wrote the book on preserving animal and vegetable substances.  In 1812 Robert Ayers then brought the canning process to America and established the first canning factory.

But it wouldn’t be until 1858 when John L. Mason patented the Mason Jar making it convenient and affordable for households to preserve their garden harvest through the canning method.  By 1884, the Ball Corporation started manufacturing millions of glass jars for home canning.  Finally, the first home canning supply business was started in 1903 when Alexander H. Kerr and the Kerr Glass Manufacturing Corporation created the first ever home canning supply business.

Soon households across America were able to preserve their own food and create a wealth of food supply for consumption as well as saving food for a rainy day.  By 1914 the Smith-Lever Act created the official position of the Home Demonstration Agent who focused on the education of safe canning methods to the masses.  By 1917 the U.S. Department of Agriculture determined that pressure canning was the only way to process low-acid foods.  By 1943 nearly every household was canning their own food with more than four billion cans and jars processed.  But by 1945 the decline in home canning was accelerating as homes across the country soon had refrigerators at their disposal.

The art of home canning was nearly lost when by the 1970s a number of outbreaks of Botulism were determined as a result of improper canning methods.  The skill that was practiced for a couple of generations of Americans in food security slowly went by the wayside to become almost non-existent today.

But Rob Morlan remembers as a child back in the late 1950s and 1960s helping his grandma and mother do the canning, “I have always canned ---- as far back as I can remember I helped my mom and grandma. It turned into a passion of mine.”

Morlan was so interested in preserving the art of canning that he taught anyone who would listen to him.  “Renee (his wife) never canned, but I started teaching her and now she loves it.”

By September of 2019, just before the pandemic hit, Rob had a need to share his love of canning further than just within his household.  He had been on Facebook for some time and mostly getting checks and warnings for his political views.  He decided to take his Facebook energies and turn it into something less political, something that he loved, and the Facebook page For the Love of Canning became a reality on September 13, 2019.  Rob says, “It was right before the pandemic.  But I knew I was on to something when we were all quarantined and we had to spend days and weeks and months isolated.”

In addition, when the pandemic hit, people started realizing that our food doesn’t just show up at the supermarket in town. Morlan explained, “They became interested in where their food comes from and how to preserve it in case of emergencies or in case they couldn’t get to the stores.”  The pandemic was a huge driver of the Facebook page.

By June of 2021 when we sat down with Morlan for an interview his Facebook group, For the Love of Canning, had just hit 10,000 members!  Now, on July 5, Morlan has 11.5K followers and growing every day.

Morlan has help with the Facebook page from some original members who are well-educated and very serious about the art of canning.  There’s Kathleen Quintana from Pueblo, Vicki Barr from Texas and Janine Parks of Bristol.  Between these moderators and a few more, Morlan says their main rule and topic of discussion is about safety in food preservations.

Morlan says, “In order to join the group a person has to agree to only present information and recipes that are safe, as well as USDA approved.  We absolutely will not put up with anyone promoting unsafe practices or recipes.”

On the page there are thousands of posts of different foods and how to preserve them.  Literally a world of information, skills, know-how, and knowledge are at the fingertips of the members who are all passionate about learning more.  Morlan indicated, “These people are from every state in the nation and 14 different countries.   We have discussions with people as far away as the United Kingdom, Panama, South Africa and Australia.” 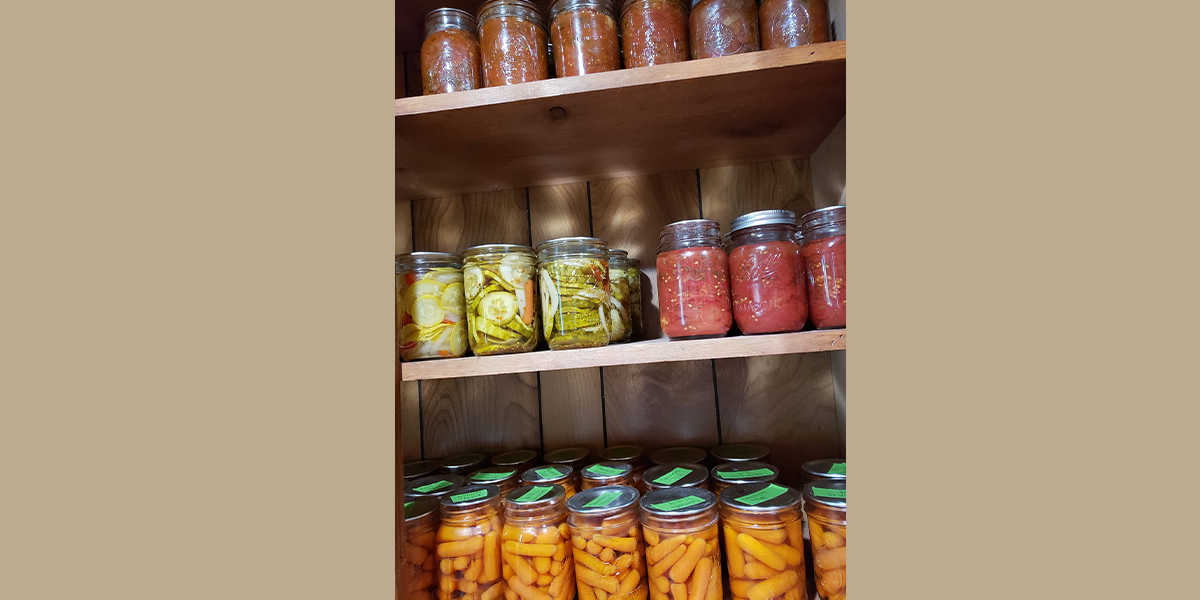 Now that it is 2021 and the pandemic is all but over, Morlan says now the canners have something more serious to worry about.  “I saw the writing on the wall when people weren’t working, and the trucks weren’t rolling, and the manufactures weren’t producing goods.  I started buying jars and canning lids wherever and whenever I could.  Sure enough, now there’s a major shortage of these items.

Morlan was lucky.  Before the pandemic he was an auctioneer and thus had been at plenty of estate sales across the region.  As a perk for all his hard work he would ask for the canning supplies such as jars and lids that the estates were selling.  “They just saw that stuff as junk and just gave it to me.  But for me, this was golden!”

Morlan says he cans approximately 80-85% of the food that they consume during the year.  “During the summer seasons I attend a lot of farmer’s markets.  I don’t grow a garden because it has just become too expensive and time consuming for me.  We also can all kinds of protein including butcher beef, canned beef, pork, chicken and hogs.  I never went to the grocery store during the pandemic.  Even now, I hardly go because we have everything we need preserved and ready to pour out for cooking.”

Morlan does state, however, that he goes to the Eads grocery store.  “Keith has been a lifesaver because he finds me lids and cases of jars.”

Morlan also had plenty to say about how to prepare preserved food once the can is open.  He is also well versed on proper canning methods depending on the type of food he’s working with.  And he is very serious about storage methods for his food.  “Right now, our entire cellar is filled with shelves of jars.  All organized by type of food and tagged with the date it was canned.”

It seems the old art of canning like grandma and mom did generations ago is more than alive and well.  Morlan is thrilled that he can share his passion For the Love of Canning with people, not just with locals, but with people all over the world.

December 07, 2022 | Administrator | News
The Colorado High School Coaches Association is excited to announce the 2023 Hall of Fame Class. This is the 59th class to be inducted. The class includes: Gary Childress, Kelly Cowan, Gail Crawfo...

By Sunday, December 4th, Everyone was "Merry on Maine"

December 07, 2022 | Betsy Barnett | News
It would have been nice to say that the 3rd Annual Merry On Maine holiday celebration held on Maine Street in Eads over the weekend went off without a hitch, but that just wouldn’t be the case. Unf...