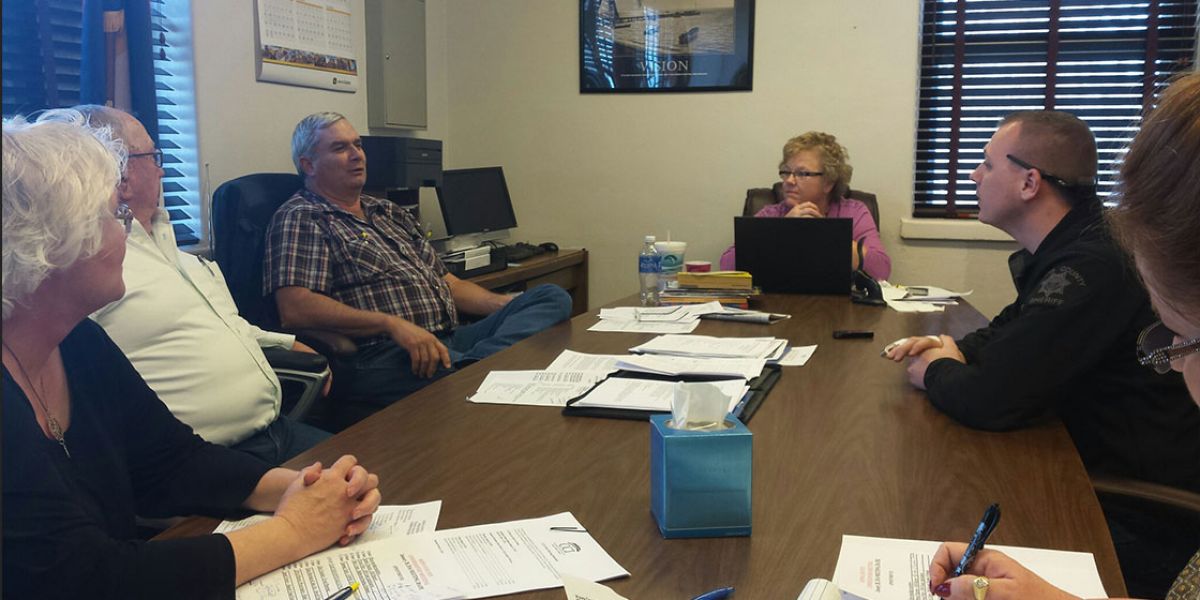 For several years, there was a consensus among Kiowa County Commissioners that economic development is best left to the private sector.  Decisions were guided by the principle that the role of county government is to reduce spending and free market principles should determine the local economy.        During the past year, Commissioners Scott, Oswald and McLoud have been broadening this approach and have come to a general consensus.  Among the long list of topics to be addressed on this year’s agenda, economic development is one of the board’s top priorities.

As was evident during their meeting on January 28th, the commissioners are specific in the components they believe are necessary to improve the economic future of Kiowa County. “We need businesses that create jobs,” states Commissioner Scott.
Businesses that create the kind of jobs that make families want to move here.”  Commissioner McLoud adds that tourism plays a vital role in the economic landscape, as well, not only for the revenue it generates but as a vehicle for introducing the county to people who are unfamiliar with the area. Commissioner Oswald cited a diverse foundation of businesses as an integral part of economic development, a statement which Scott immediately supported.  “We need a variety of streams of revenue,” Scott says.  “Relying on one industry is dangerous.”

Dynamic economic development is obviously a worthy goal, but how is it achieved?  There was no shortage of ideas when the discussion turned to specific things that could be done.  Oswald commented, “If we want more tourism, there needs to be something for people to do when they get here.” The Sand Creek Massacre Historical Site was mentioned as it brings thousands of people to the county every year. The completion of the Sand Creek Visitor’s Center will greatly increase foot traffic on Maine Street and have a positive impact on businesses located in that area.  The future designation of the Towner Bus Tragedy as a historic site was also mentioned.  This addition to the historic sites in the area should make the creation of a regional tour of historic sites a more likely possibility.  Commissioner Oswald brought up Eads’ location along the Transamerica bike route as an untouched resource.  Despite the perceptions some people have about the individuals that cycle along Highway 96, these cyclists are actually a very affluent, highly educated and diverse group.  Many of the cyclists are from other countries and are doctors, engineers, professors and from other highly professional occupations. “We have hundreds of people coming through here every summer,” Oswald states. “Why aren’t we doing something that would encourage them to stop here and eat, shop, maybe stay in a local hotel?”  Other highly viable ideas were brought up for discussion, including continuing the pursuit in developing renewable energy, keeping water in the lakes which would greatly encourage fishing, hunting and birdwatching—three activities for which Kiowa County used to be famous. All the ideas discussed were also underscored with one overriding comment.  It is important—if not absolutely necessary—for the county to partner with others in bringing these ideas to fruition, whether that’s in the form of a regional partnership with other counties or creating an environment that encourages new business start-up.  Commissioner McLoud adds, “It’s our job as commissioners to open doors. It’s up to the people to walk through them.”

While the commissioners are still developing an overall strategy, some concrete steps have already been taken to encourage immediate economic development and support existing businesses.  Specifically, the position of an Event Planner was created this year. The goal of the position is to use one of the county’s most notable assets—its high quality fairgrounds—to its greatest potential.  Toward this end, the Event Planner has already scheduled the first event:  a catered Valentine’s Day dinner and carriage ride.  Other events are potentially on the schedule including, but not limited to, horse racing, possible periodic flea markets and, of course, the annual Kiowa County Fair.  There is also a fund that is specifically designated for the purpose of directly supporting local businesses by, when appropriate, the patronage of local businesses and services.

Even with the abundance of ideas, the commissioners are very aware of the challenges the county faces in growing the economy.  The most glaring fact is that Kiowa County ranks third statewide in the lowest estimated value.  More specifically, Kiowa County’s estimated value is $39,632,810.  By comparison, Cheyenne County’s estimated value is $172,195,893, more than four times the value of Kiowa even though both counties are almost identical in geographic size. This disparity is due, among other things, to Kiowa County’s dryland farming as well as the amount of oil being drilled in Cheyenne County.  But losing the railroad had the most immediate impact on the county’s estimated value, dropping it by a third overnight.
Commissioner Scott expanded on this problem. “Every dollar spent impacts someone else by seven dollars.  That means that every dollar someone from here spends somewhere else, seven other people outside the county are benefiting.”
Despite the size and extensive history of these challenges, the commissioners are determined to be optimistic.  As Commissioner Scott summarized, “This problem was created overnight. It won’t be solved overnight, either.  But we’ve got some dedicated citizens in this county who really want to make things better, and that’s a pretty good place to start.”