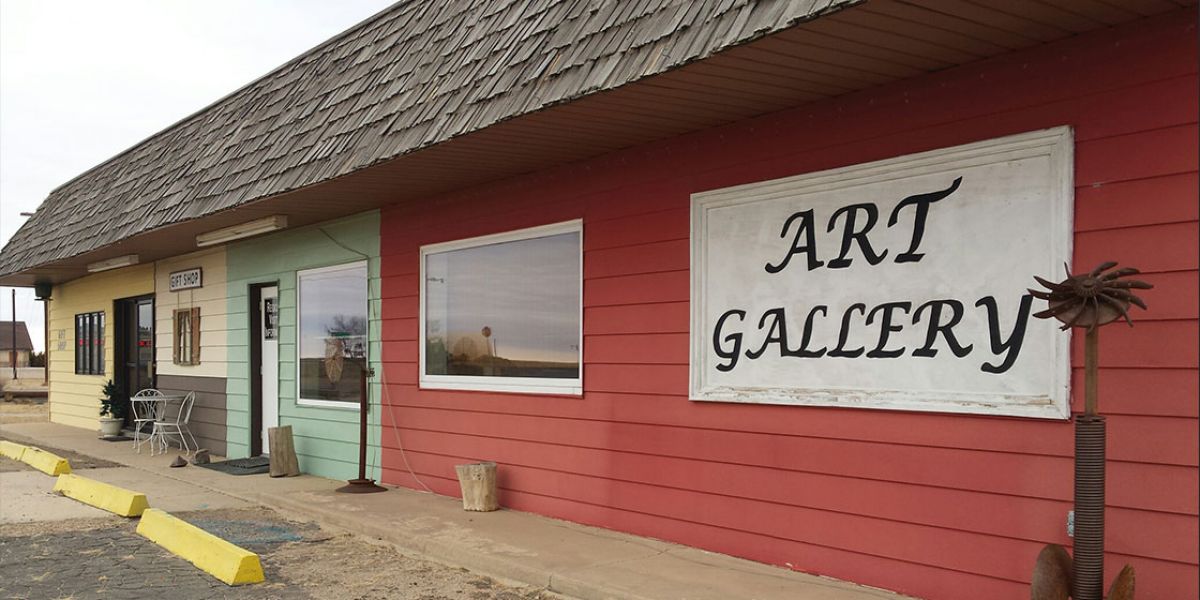 The End of an Era for Artists of the Plains

For the past 15 years, people traveling on Highway 287 north of Eads have passed the turquoise and yellow building on the east side of the road with a wooden, unassuming sign that reads Artists of the Plains.  The name itself conjures up images of iconic scenes depicting windswept prairies, farmhouses, barns and windmills against broad blue skies captured on a canvas or through a photographer’s lens.
The building has been everything from a truck stop to a church to a donut shop.  However, for the last decade and a half, it has been a gallery and gathering place where a group of artists could work, laugh, swap stories and sell their work to the different customers that came inside for a look around.  Artists of the Plains has been a small oasis of art and culture in a land that’s often harsh and unforgiving.
And now this building that’s as much a part of the landscape as the paintings inside is closing its doors.

“We got hit by the recession and drought at the same time,” says Terry Laird, artist and long-time member of the group. “It was tough. We held on as long as we could, and then we just couldn’t hold on anymore.”

From the beginning, Artists of the Plains has been a community effort.  Before the gallery opened, ten to twelve artists met weekly in the courthouse to paint and enjoy each other’s company.  “We were like family,” says Sandy Jones, another member and well-known local artist, “And we’d always dream about having our own place to paint and hang our work.”  When the building on Highway 287 came up for sale, “We knew it was the perfect place,” says Laird. “But who’s going to give a loan to a bunch of artists?”

The solution came from an anonymous private local citizen who believed the gallery would contribute to the area. He took out a personal loan to buy the building, allowing the artists to pay him back over time. “He was sort of our hero,” Laird says.
Initially, the gallery prospered.  As many as 30 artists from the region and neighboring states exhibited their work, voluntarily covered the gallery and landscaped the property. There were times when finances were tight, but garage sales and bake sales supplemented revenue and covered expenses.
Then a drought as bad as the “dirty thirties” hit the area, the local economy declined and things began to go south.  “Art is a luxury in hard times,” muses Laird. “People work hard just to stay in their homes.”
Nonetheless, the artists were determined to stay open, eventually using money from savings to pay the bills.  The rains finally came. The economy began to rebound, but relief came too slowly for the gallery.
A year ago, the artists made what Laird describes as a “necessary but very difficult decision”.  There  was simply not enough money to keep the gallery going.  “Somehow, we made it a whole year,” says Jones, “but we all knew how it was going to end up.”  Word spread that the building was going up for sale. “It’s a small town,” says Jones.  “People hear about things like that.”
In early January, rumor became reality when a man who wanted to open a diesel mechanic’s shop put in an offer on the building.  The group had no choice. A contract was signed. They close on the deal in March.  The building is now almost empty.
Several artists are currently displaying their work in various places.  One painting hangs in the lobby of Kiowa County National Bank and other sites are being considered. However, at this point, there is no coordinated plan to  exhibit artists’ work. When asked how he felt about things, Laird said, “I’m still trying to wrap my head around this.  It’s sad.
Very sad.”

Jones agrees.  “This has been my passion for a lot of years, but there comes a time when you just have to accept the way things are.”  She pauses and then adds, with no small amount of conviction, “But we’re not going to quit painting just because the gallery’s closing.  This is what we do, and we plan to keep on doing it for a long time.”
Anyone with suggestions or offers of economically feasible locations for the gallery to relocate are encouraged to call the Kiowa County Independent at 719-438-2040.