Quilts that Cover, Comfort and Heal

Written by Priscilla Waggoner on 12 September 2018. Posted in News

For more than 200 years, women in the United States have been quilting, often gathering in groups to join efforts on a single project. Anyone familiar with quilting will describe it as an extraordinary craft that calls for the eye of an artist in creating the design along with the meticulous attention to detail exhibited by masters of the “running” stitch. 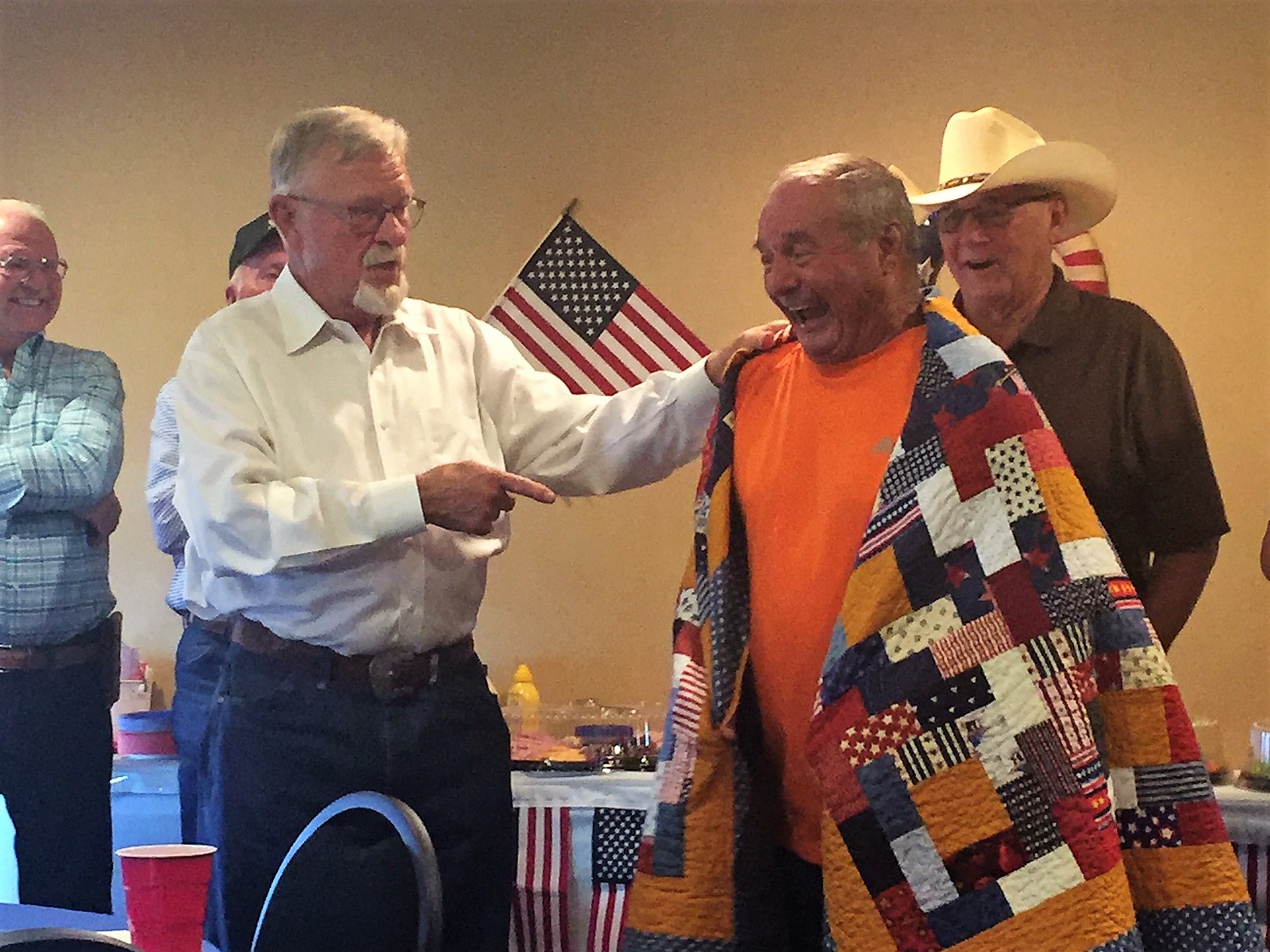 But quilting is also more than that. Over the years, quilting groups were often a source of companionship among women, most typically during the long winter months. And when times were hard—especially during the years from 1825 to 1875 when quilting flourished as the country faced hardship after hardship—quilting was also a source of support and solace as women thought of the loved ones for whom the quilt was being made. And what could be more symbolic of a loving act than to take scraps and pieces of leftover fabric and, in an effort that takes literally hundreds of hours to complete, assemble them into a work of grace and beauty?

With that in mind, this is a story that begins in 2003 with a woman named Catherine Roberts. Many things could be said about this woman. She lived in Seaford, Delaware. She was a midwife. She was the mother of a son who was also a soldier serving in Iraq. And, one night, she had a dream.

“The dream was as vivid as real life,” Roberts writes. “I saw a young man sitting on the side of his bed in the middle of the night, hunched over. The permeating feeling was one of utter despair. I could see his war demons clustered around, dragging him down into an emotional gutter. Then, as if viewing a movie, I saw him in the next scene wrapped in a quilt. His whole demeanor changed from one of despair to one of hope and wellbeing. The quilt had made this dramatic change.”

Roberts interpreted the message of the dream: quilting = healing.

That single dream, that single message led to the creation of a foundation, the mission of which is “to cover service members and veterans touched by war with comforting and healing ‘Quilts of Valor’”.

Although Roberts’ vision for the Quilts of Valor Foundation (QOV) began somewhat simply, it evolved over time to include all branches of service, all of those who were involved in any conflict (no questions asked) and, as a result of learning about those civilians involved in accompanying fallen warriors home, the individuals involved with the Air Force Mortuary Affairs Operation at Dover Air Force Base.

And with the first presentation of a quilt to a soldier from Minnesota who had lost his leg in combat in Iraq and was currently a patient at Walter Reed Army Medical Center, Roberts’ commitment just grew stronger. “Chaplain John Kallerson opened the door for us at Walter Reed primarily because his wife Connie Kallerson happened to be a quilter,” Roberts recalls. “She impressed upon him how comforting quilts can be. John also saw the value of awarding quilts to his wounded because of the message they carried that someone cares.”

In the fifteen years that have passed since that first dream, more than 195,000 quilts have been presented to service members and veterans, 2494 which were awarded this month and 486 this week.

Extraordinary.
Last Friday, with reportedly more than a hundred people in attendance and a ceremony that families had known about for over a year but kept a secret, the Quilts of Valor Foundation awarded quilts to two veterans connected with Eads.

Jerry Ritchie, who was nominated for the award by Arnitha Ritchie Frazee, was presented with his award by Colonel Randy Pyles, Ritchie’s commanding officer while he was in the Marines. Ritchie was in the Marines for 26 years and did tours of duty in Viet Nam and Japan. When Colonel Pyles made the award, he told a story involving Jerry, a group of Marines, a 3-day hike, a little too much imbibing and a bear. (What’s that saying about “crazy Marines”?) 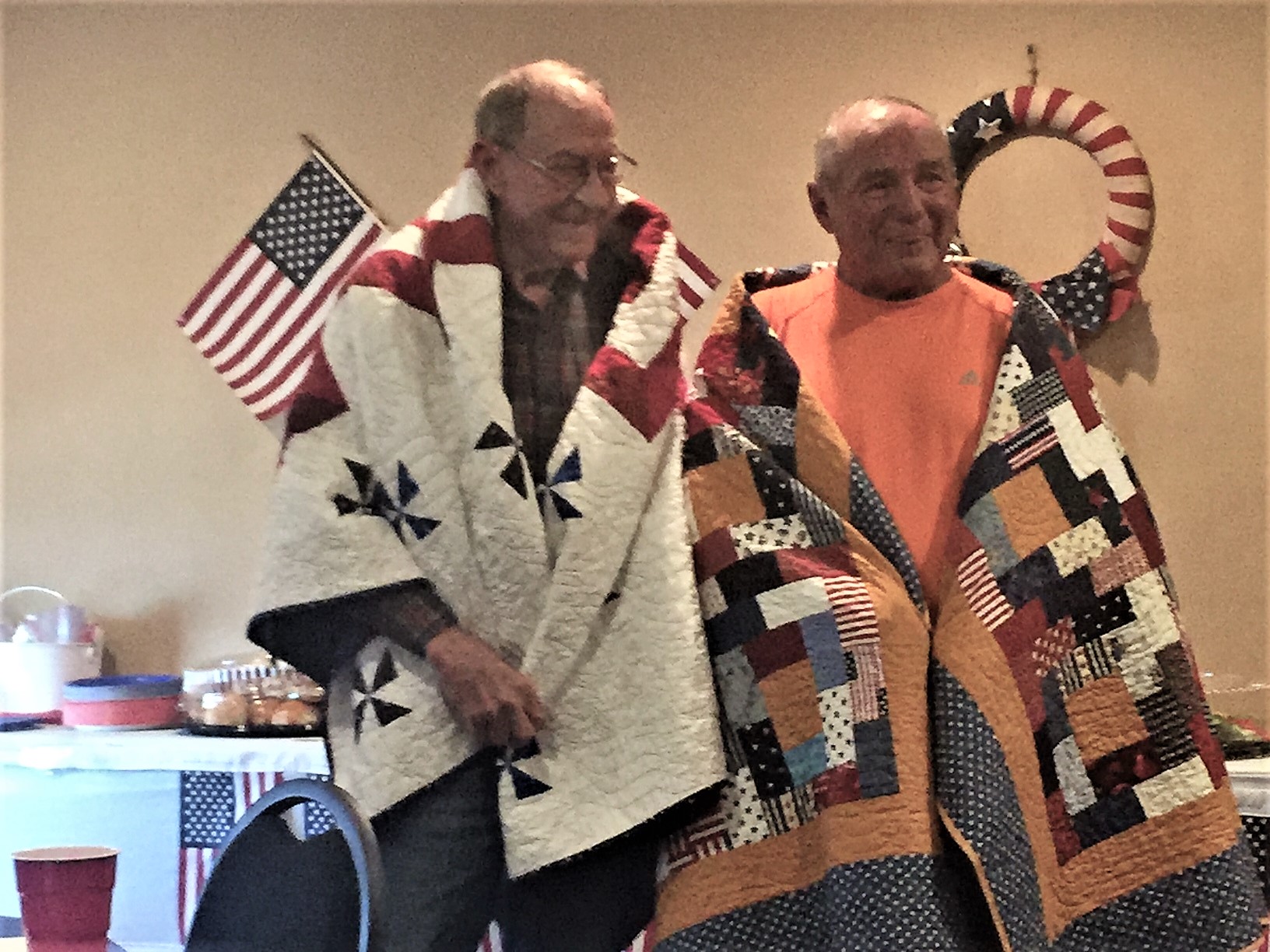 Bill Woelk was nominated for the award by Ronnie Weiser. Woelk had been Weiser’s coach and science teacher in high school and, as stated in Weiser’s nomination, had kept his time in the Korean War to himself.

Both men were presented with absolutely stunning quilts made by Shar Weiser and the Grand Valley Valor Quilters, which consists of 14 quilters all of whom live in Grand Junction. The nominations had gone to Shar’s group, and they were empowered to approve both requests.

When asked about her involvement in the Valor Quilters, Shar states that it had always bothered her how soldiers returning from Viet Nam were treated. “I was in high school at the time, and I didn’t have a voice,” she says. “But now I do, and I do this to say ‘thank you and we honor you for your service and sacrifice.’”

Both men also received crosses made by Wally Mosher, formerly of Eads and now living in Colorado Springs.

As for the two recipients, neither were available for comment. But several of the people in attendance remarked that the entire presentation was very moving. And the quilts were the most extraordinary way to say “thank you” in a way that lasts.