Written by Priscilla Waggoner on 15 May 2019. Posted in News

A team of researchers from the University of Denver have been flying drones over a specific location in southeastern Colorado lately. If successful in their endeavors, the result will, quite literally, provide an extraordinary glimpse into the past. 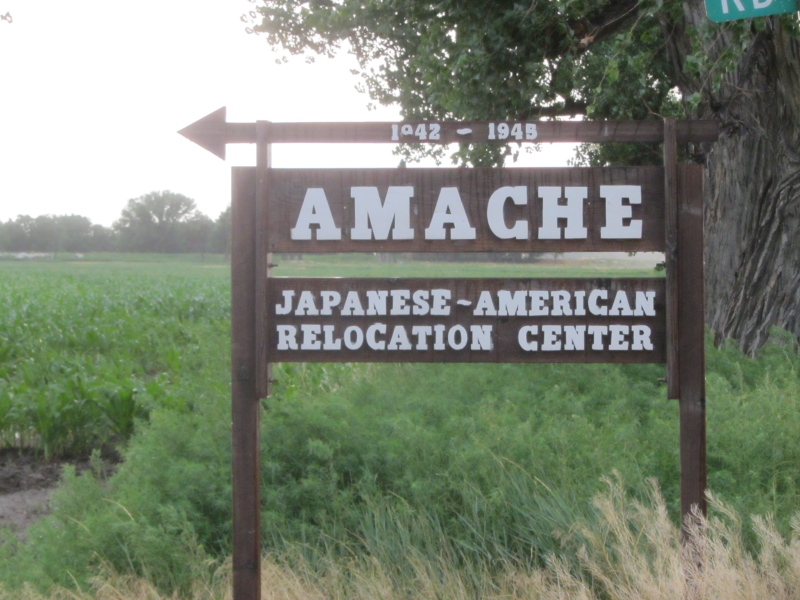 Standing on the huge parcel of land known as Camp Amache, the temptation is no doubt strong for some who are only vaguely familiar with history to allow the passage of time to assuage the implications of what happened there. After all, the small, friendly, farming town of Granada is just a mile or so down the road. The name “Amache”—drawn from its postal designation—has a kind of friendly sound. Aside from the neighboring land that’s being farmed, the site, geographically, is really no different from other large sections of land. Wild grasses, sagebrush, prickly pear cactus and a few stands of trees line the roads that are well maintained. What were once rows upon rows of barracks and other buildings are now just a series of concrete foundations.

But for those visitors who know their history or stop and read the interpretive signs with photos or let it sink in that, yes, that structure in the distance is a guard tower that was once manned with soldiers whose guns were trained on the people inside the camp and not outside…well, the years that have passed since 1942 can vanish pretty quickly.

Once that barrier of time is gone, the enormity of Camp Amache can seem a lot bigger than the 10,500 acres it once contained.

As most locals know, Camp Amache’s official name was the Granada Relocation Center. It was one of ten internment camps in the nation used during World War II to incarcerate a total of around 120,000 people of Japanese ancestry. And the incarceration and internment was all planned and executed by the United States government.

Two months after the bombing of Pearl Harbor, President Roosevelt authorized a plan where 120,000 “evacuees”, as they were called, were directed to leave their homes in California and, carrying only what they could put in a suitcase, forcibly relocated to remote camps enclosed in barbed wire where they were held prisoner until the end of the war.

Two thirds of those incarcerated were American citizens. Over half of them were children. And their crime? They had “Japanese blood”, which, for many, instantly put their loyalty to America in doubt. 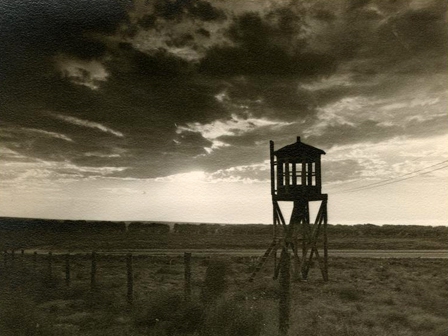 Camp Amache started in operation on August 27, 1942. Over the next three years, 10,300 Japanese-Americans were incarcerated at the camp, with peak occupancy totaling 7,318 people. The camp continued in operation until October 15, 1945, exactly two months after Japan surrendered, when the last internee was given $25, a bus ticket and allowed to leave.

Once freed, the Japanese-Americans had no choice but to rebuild their lives from scratch since they had been forced to either leave almost everything they owned behind or, if lucky, sell all for typically ten cents on the dollar.

Meanwhile, the government, that had obtained most of the land for the camp by condemning it when all but one landowner refused to sell, auctioned off the property along with the barracks and other buildings.

Over the years, the prairie took back over. Decades passed, and all that remained of Amache was what lingered in people’s memories and the few history books that wrote of the internment.

As most locals know, the loss of Amache to time was stopped and slowly reversed, due to the extraordinary efforts of a high school teacher named John Hopper and his students from nearby Granada High School. Thanks to their work over the years alongside the enormous support of former Amache internees and their descendants, visitors today can walk the trails with informational materials in hand or listen to a downloadable tour while storytellers recreate the experience with images, words and recollections. It’s up to the visitors’ imaginations to take it from there.

But now, the team from the University of Denver is going to take that experience one gigantic step further and place it smack dab in the virtual world. 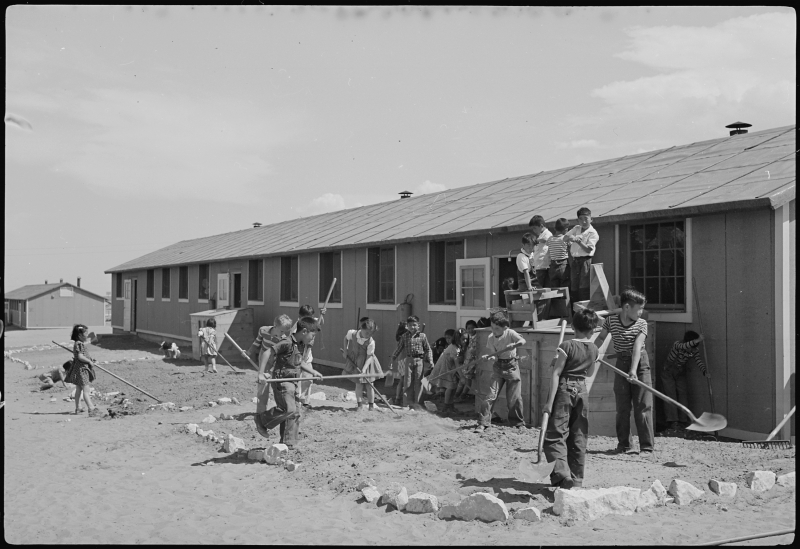 Using the senseFly eBee X drone from the Switzerland company by the same name, a skilled drone pilot recently flew over the one square mile site, taking roughly 4,000 images. According to a story filed by AP reporter Russell Contreras, the images will document the location of the barracks, schools, community building and other structures. That data can then be used by the researchers to create virtual reality and “augmented reality apps”, ultimately allowing visitors to view images of the camp with digital precision, exactly as it was when it was occupied.

In a recent interview, Jim Casey, University of Denver geographic information system specialist working on the project, described the digital mapping of Amache as a “game changer”. “You could be standing at the site, looking at nothing but sagebrush and weeds,” he was quoted as saying. “Then you can point your smartphone at the view and see what was once there.” Casey added that, once the drone data is processed, people unable to travel to the site will be able to view the camp virtually.

John Hopper, the high school teacher responsible for spearheading and guiding the work that initially resurrected the site and keeps it evolving on an ongoing basis, sees great potential in what the virtual reality feature can do to enhance visitors’ experience and understanding. “This mapping will give us the most complete mapping and digitization of any of the internment camps,” Hopper states. “People will be able to view what Amache looked like in the 40s compared to today.”

At the same time, as far as people taking a virtual tour from a distance (and all things being equal), there is something unique about visiting Camp Amache in person. Anyone who’s been there can testify to the profound impact the atmosphere of the place can have. The sheer size of it, the sometimes overwhelming silence that will suddenly be broken by the sound of birds singing, the wind that seems to come from nowhere and dissipate as quickly as it came all pave the way to opening the door for examination of some very important things.

What happened there. The reason for the camp’s creation. The respect due to the internees for, in some cases, their persistent patriotism in volunteering for the military and, in some cases, losing their lives in battle. For others, their determination to create a life that continued to have meaning and order and beauty despite having been robbed of the basic human right to be free in a country they loved and considered home. All of these thoughts and more can present themselves to those who visit Camp Amache. And now, thanks to the work of the devoted researchers at DU, that experience can be even more meaningful as people are given the chance to stand with one foot in the past and one foot in the present. 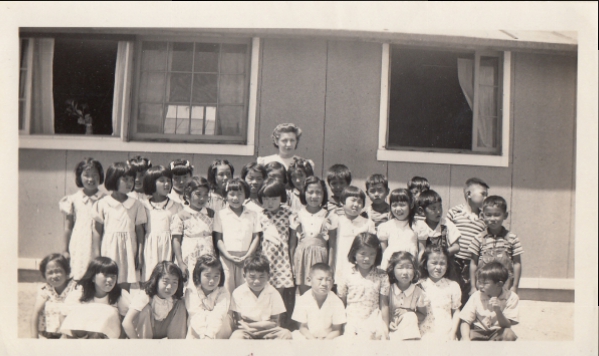 Winston Churchill is credited with saying, “Those who fail to learn from history are condemned to repeat it.” His deliberate choice of the word “condemned” reveals the peril that is present when we refuse to examine actions taken in the past, almost making it inevitabile that those same mistakes will be repeated with, as Churchill suggests, possibly dire consequences.

Today, the debate still exists about the morality of a government sanctioning imprisonment of people based on nothing but their ethnicity and the fear of what that ethnicity might cause people to do. For some, that was a question answered long ago. For others, not so much. But it’s a conversation that will never lead to resolution one way or the other until there is full understanding of what such a move means, be it the larger preservation of freedom or the destruction of what freedom, itself, actually means.

In either case, a visit to Camp Amache, which is now a part of the digital age, can only aid in a deeper understanding of who we are, what we stand for and where we go from here.