Written by Priscilla Waggoner on 05 June 2019. Posted in News

Last week, with a community solar garden in Arvada serving as backdrop, Governor Polis signed into law seven pieces of legislation that were passed in the 2019 general legislative session related to energy efficiency, community based renewable energy and requiring the collection and reporting of data collected on greenhouse-gas emissions. Polis also presented a series of goals for making Colorado’s electric grid free of fossil fuel use within three decades, and, in so doing, made good on one of his major campaign promises to set Colorado on the road to achieve 100% renewable energy by 2040. Polis described the legislation as “building blocks” to achieve that goal and drastically reduce climate-changing emissions. 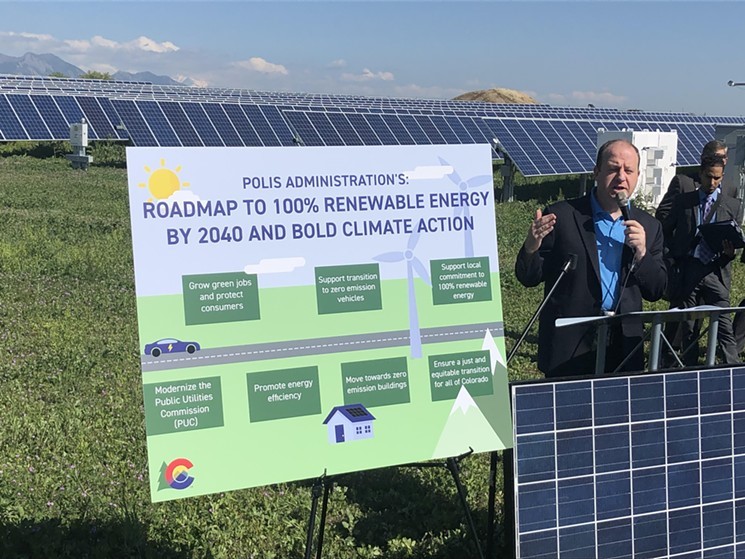 Other legislation signed by Polis strengthens water and energy efficiency standards for all new appliances sold in Colorado, phased in over a period of 3 years beginning in 2020.

HB19-1260, “Building Energy Codes”, requires local jurisdictions to adopt one of the three most recent versions of the international conservation code.

Included in the bill reauthorizing the Colorado Public Utilities Commission is a requirement that utility companies submit plans to reduce greenhouse-gas emissions. The bill also instructs the PUC to search for ways to encourage utilities to be more energy efficient and cut emissions.

Legislation titled “Community Solar Garden Modernization Act” addresses existing rules that were seen as limiting the expansion of solar gardens. Originally pioneered in Colorado, a community solar garden is, basically, an array of solar panels placed in a central location within a community where individuals interested in “subscribing” to the solar power are allowed to do so, for a fee. The purpose of the gardens is to make access to solar power available to those individuals whose roofs aren’t suitable, who live in an apartment or can’t afford the cost of solar system installation. Included in the legislation is increasing the maximum allowable size of a solar garden from its current 2 megawatts limit to 5 megawatts. Eventually, the cap would increase to 10 megawatts.

Introduction and debate of some of the bills and related measures resulted in heated, albeit predictable, debates during committee meetings and in the Senate and the House. A group that describes itself simply as “ratepayers”, which were organized by the Denver libertarian think tank Independence Institute raised concerns that encouraging utility companies to shut coal plants earlier than planned and produce more renewable energy will drive up utility bills. Their concerns were echoed by members of the Colorado AARP.

In response to Polis’ inclusion of requiring manufacturers to make available for purchase a certain percentage of low-emission and electric vehicles in Colorado will reduce buyers’ choices and increase prices.

In contrast, Executive Director of Conservation Colorado Kelly Nordini praises the legislation, describing it as a climate policy that will lead the nation. “Colorado should be leading on this,” she recently stated in an interview with The Denver Post. “We have wildfires, dirty air, less snow, a lot of concern about the climate and a lot of opportunity to leave a great legacy and show the nation the way forward on this.”

When Governor Polis signed the bills, he was in the company of several legislators, local elected officials and representatives of utilities and conservation organizations. “We are very excited about the opportunity for Colorado to achieve 100% renewable energy by 2040,” he said to the crowd of individuals who had gathered to witness the bill signing. “What does that mean for every Coloradoan? It means, cleaner air, green jobs that can’t be outsourced and lower electric rates, thanks to the decreasing costs of wind and solar power.” He then added, “And of course it’s about the health of our planet and about climate change, particularly in a state with climate dependent industries like agriculture and the ski industry.”