Formula for Success: A Little Bit of Guts, A Whole Lot of Grit and a Really Good Idea

Written by Priscilla Waggoner on 19 June 2019. Posted in News

Scott Scheimer is described by those who know him as a “really smart guy” who’s not afraid of a challenge. When asked to describe himself, Scheimer simply says he “loves adrenalin”. But everyone who knows Scheimer agrees on the same thing: he has always wanted to be a farmer. 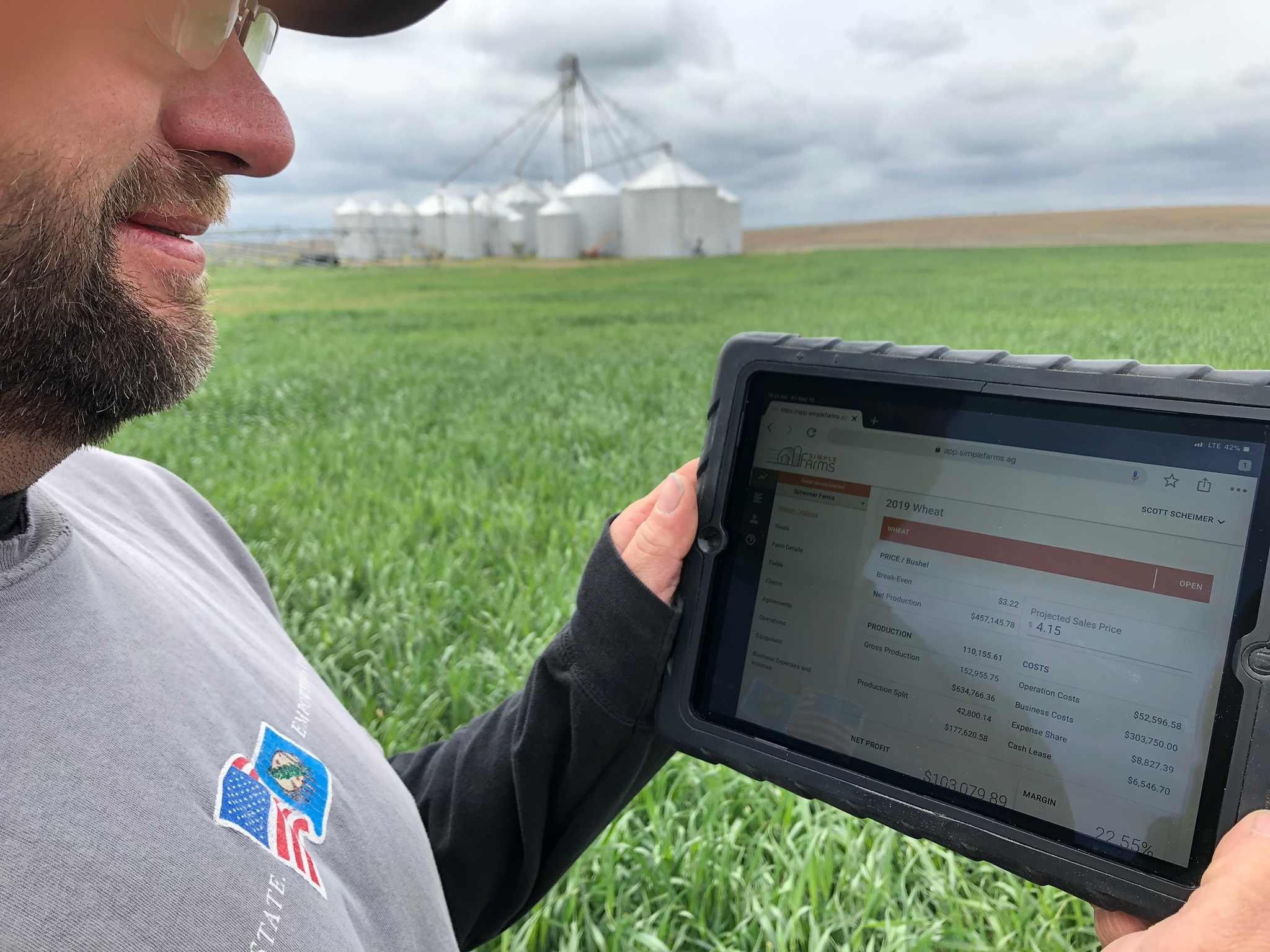 It started when he was very young and saw his grandfather, Andrew Schaefer, working with his harvest crew and farming the family’s land in Cheyenne Wells. Apparently, Scheimer, who was just 3 at the time, made it clear he wanted to be in that tractor with his grandfather. There was just one condition. He pauses for a moment and chuckles. “I had to be potty trained first.”

That experience as a toddler must have really taken hold because, forty-five years later, Scheimer is exactly where he saw himself at 3 years old: in a tractor working the farm.

Of course, some things have changed since his grandfather’s time. For example, Andrew Schaefer didn’t have GPS, a system that uses satellite coordinates to auto steer a tractor while the farmer doesn’t do much aside from sitting at the wheel making sure the tractor does its work.

Another change? It was more feasible for a farmer to make a profit back then, although it’s never been easy. As Scheimer puts it, “In Eastern Colorado, it’s really hard to net ten dollars an acre. And it’s really easy to lose twenty.” That’s something Scheimer knows from “both sides of the fence”, as the saying goes. Not only has he spent three decades learning those challenges first hand, he also spent a year as a grain marketer for Cargill—a job which he admits to hating but also admits to teaching that taught him an enormous amount about marketing grain.

So, what do you get when you take a “really smart”, demonstrably determined man like Scott Scheimer and put him in a tractor with nothing to do but think, and the thing he thinks about are how to overcome obstacles to making a living doing what he’s always wanted to do?

Well, after two years spent in a tractor surrounded by spiral notebooks, spreadsheets, a huge amount of research and Post-it notes stuck all over the place and then another two years spent raising capital, hiring some of the best software developers in the business and going through all the trials and tribulations of creating a program that actually accomplishes what it’s supposed to accomplish, you end up with an extraordinary product called Simple Farms. Simply put, Simple Farms is a user friendly app for farmers to use on their iPad or cell phone that is specifically designed to provide those farmers with an individualized, comprehensive picture of their breakeven point of operation at any given time on any given day which then gives them a figure they can then use to compare against real time market prices.

But, before getting into the specifics, this is not just a story about a talented and creative farmer coming up with a piece of software that could truly empower farmers to have unprecedented knowledge about their operation and enable them to make decisions based on data as much as instinct. This is also a story about the man who has just brought this product to market. And it’s a story worth telling because it has some lessons that could apply to everyone, whether they ever sit in a tractor or not.

Scheimer was born in Arizona and grew up in the military. His father was a fighter pilot, which took the family all over the world, including 3 years spent in Europe. But none of that distracted Scott from what he wanted for his life. Every chance they got, the family came back to Cheyenne Wells where his mother’s family lived, and Scott would be out in the fields with his grandfather.

Growing up, Scheimer learned a lot about life from both his fighter pilot father and his mother, who had a passion for the family farm but diverted that passion into financial planning. He learned that nothing comes without working for it, but the goal is to work smarter not harder. He learned that success doesn’t come without taking some risk. And he learned that the fear of failure is one of the biggest obstacles because it’s the failures that teach us the most in life. In fact, Scheimer believes that failure is the key to learning. You have to be curious; you have to ask questions, and when you fail, because you will fail at some point, you learn from the failure and make sure not to repeat it. He also learned to have fortitude and to just “gut it out”. Those lessons—first learned when he was young and then learned again and again over the years—laid the foundation for what he would do as he grew older.

When it was time to go to college, Scheimer chose CSU where he majored in Agriculture Economics. And when his grandfather died in 1991, it was Scheimer who took over the family operation. He was 19 years old.

“My brother was going to CU, and I was at CSU,” he explains. “So, every weekend, we drove down here to work and keep things going.” That’s a big responsibility, and, frankly, kind of a big risk for a teenager to take over his late grandfather’s farming operation while attending college full time 3.5 hours away. He did it, though.

And that wasn’t all he was doing.

In 1993, while Scheimer was in college, he developed a strong interest in a field completely unrelated to agriculture. “I got into competitive bodybuilding,” he says with a chuckle that carries just a tinge of self-consciousness. “I had a lot of equipment in my basement plus some other equipment I’d made myself. After a while, other guys wanted to come over and use what I had.”

It wasn’t too long before the number of “other guys” began to grow. While the common offer of “a six-pack of beer in exchange for working out” at his house had a certain appeal, Scheimer decided to buy a vacant building in Cheyenne Wells where he put his equipment. “When I got that building,” he recalls, “the whole thing just exploded.” Soon, that building grew to two buildings. Then, with help from Eastern Colorado Bank in Cheyenne Wells, Scheimer got a grant to build a new gym. “I never pocketed a dollar,” he says. “Everything I made, I put right back into the gym.” “until just a few years ago when I started drawing a salary.

Twenty-five years later, that business is now known as Hard Bodies Fitness and Gym, a facility that has a workout gym, a racquetball court and employs two professional trainers plus a yoga instructor who use the facility to work with their clients. It’s also an integral part of the community. “The school uses it,” he says. “In fact, they make it mandatory for athletes. But best of all…I can go at night and find high school kids in there working out or playing racquetball. And that’s worth it all, knowing that the kids have something to do besides getting into other things that might not be so great.”

Far from just a side line business, Scheimer credits the experience of building a successful workout facility with giving him the confidence to create Simple Farms. But, again, it wasn’t just his success that helped him. “I’ve tried other things that failed,” he states, “but those taught me just as much.”

When discussing Simple Farms, it doesn’t take Scheimer much time to cut to the chase. “In the last three years,” he says, “there have been a total of nine days each year where farmers could make a profit on the market—that is, nine marketing days where prices were above breakeven. When you know what your breakeven point is—what you’re spending on chemicals, fertilizer, gas in your tractor, depreciation on your equipment, all of your costs—you know when you can make a profit and, based on the prices that day, how much that profit will be. Most of the time, farmers get a figure in their head, like, say, four dollars a bushel, and they hold out for that price before selling. In other words, they hope, hope, hope to hit that four dollar mark, but then they find out they never hit that mark and end up selling at a loss. With Simple Farm, if I know that my cost is, say, $3.29 a bushel and the price is $3.89, I can sell and make sixty cents a bushel.”

And the app was developed so that it’s as easy to use as playing a game. “Within five or six taps on the screen, a farmer can track his cost,” Scheimer states. “It’s really that simple.”

On a transactional basis, that knowledge demystifies the whole process. On a larger maybe even more philosophical basis, that knowledge also empowers farmers to be more in control of their own operation by allowing them to make decisions based on actual data. Simple Farms even takes the process one step further by providing two parts in the program: the first part calculates for each farmer his specific breakeven point, and part two gives him information on where to market his product. And the product provides farmers with one other very important feature: the information is completely confidential. No one is tracking that data other than the farmer, himself. 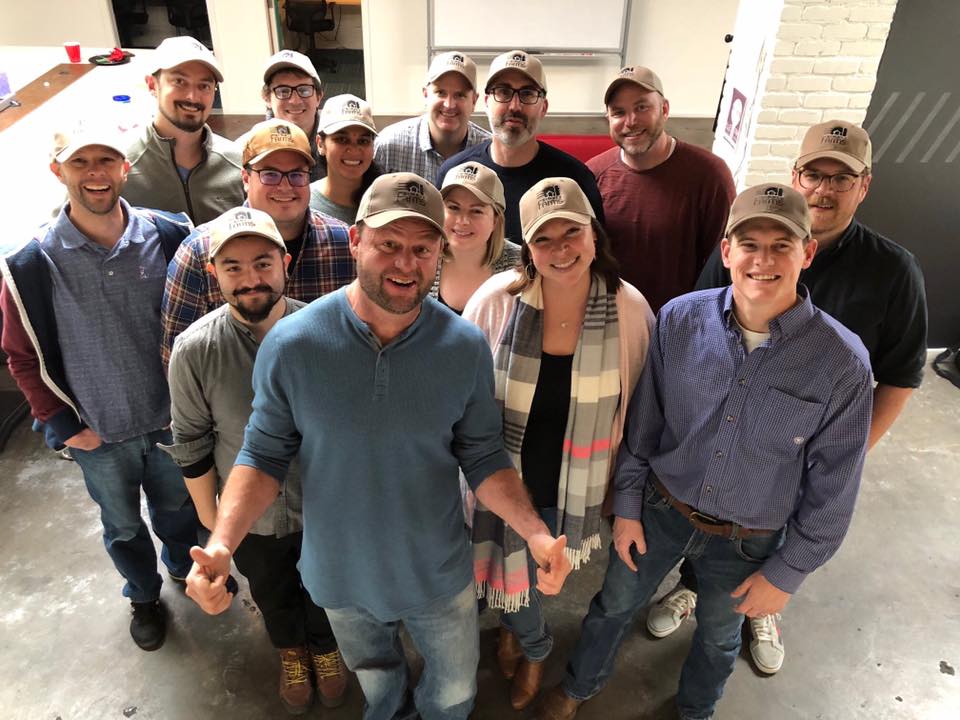 Scheimer launched the product in February, not the best time, he admits, to present a new product to farmers, but he wasn’t going to take it to the farmers until he was certain it was ready. “I believe we’ve created a tool that puts farmers where they want—and should—be: in control of their operation.” That’s a tool worth waiting for.

And, frankly, the stakes couldn’t be higher. “I love farming,” Scott Scheimer says. “Every day is a new day with something different that needs to be done. I do business with everybody at one level or another. And I’m in control of my own business. It’s not a job. It’s a passion. A way of life. And that’s something worth doing what you have to do to save.”