It's That Time of Year: Football, Pumpkins and...THE FLU!

Written by Priscilla Waggoner on 08 October 2019. Posted in News

October is here, which means that football season is in full swing; temperatures are dropping at night, and Halloween is on the horizon. According to most health care professionals, October is also the month that marks the beginning of flu season. 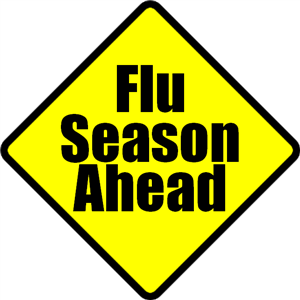 Knowing when flu season starts is helpful, but predicting how bad this year’s flu season will be is another story entirely, especially given the severity of what happened last year (2018-2019) when the flu season lasted 21 weeks, the longest flu season that had occurred in the United States in at least a decade. According to the Centers for Disease Control (CDC), 2018-2019 had two waves of the flu: the first strain to show up was H1N1 followed by H3N2. Essentially, two flu seasons swept across the nation, back to back, a phenomenon the CDC described as “something most providers hadn’t seen before”. Flu season for the previous year (2017-2018) was not much shorter, lasting a total of 19 weeks.

Nonetheless, there are certain things patients should know about the flu. Although the information is already familiar to many Americans, the important points bear repeating.

The flu—or influenza, as it’s officially called—is a contagious disease with symptoms that can range from mild to severe with potentially life threatening complications even in young, healthy children and adults. The people who get hit the hardest are adults over the age of 65, accounting for most flu-related deaths and more than half of flu-related hospitalizations. Pregnant women are also vulnerable as are children and health care workers.
Children under the age of 2 are especially vulnerable. Newborns to six months old are also much more likely to get complications, but they’re also too young to be vaccinated. Consequently, the CDC advises that everyone in contact with them is vaccinated.
Granted, there will always be those who dismiss the disease by saying “it’s just the flu”, but the facts paint a picture that’s a little more sobering. In the 2018-2019 flu season, it’s estimated that 42.9 million people got sick with the flu, 647,000 were hospitalized and 61,300 people died.

And that brings us to the topic of vaccination.

However, up front, there are some myths about the flu vaccine that need to be busted, so to speak. First, the flu vaccine that’s given with a needle does not—cannot—make people sick because there are only two ways vaccines are developed: one involves using viruses which are inactivated—in other words, killed—and, therefore, are not infectious or using a gene from a virus (as opposed to the ”whole” virus) in order to produce an immune response. Yes, sometimes people will not feel well after getting the vaccine, but symptoms are usually related to redness at the site of the injection and soreness. Even with people who experience mild symptoms like a low grade fever, muscle aches or a headache, those symptoms usually last 1-2 days while the flu virus lasts significantly longer. It is not better to get the flu than it is to get the vaccine because the flu virus can be a serious—or even deadly—infection, often leading to other sometimes serious complications. Getting the flu vaccine is not a one shot deal (no pun intended) but is, instead, needed every year. A person’s immunity to flu decreases over time, so an annual vaccine is recommended for everyone over the age of six months.

Even though the flu vaccine is the best way to prevent infection, it’s not a perfect fix. There are many different strains of the two types of flu—A and B—that infect humans, and it takes time to develop, produce and distribute vaccines in time for flu season. As a result, experts have to decide which strains to include in the vaccine months before flu season starts. Strains can change quickly and there are many different strains of flu virus that can circulate within a given year. Flu vaccines are also created to protect against the three or four strains that experts predict are most likely to be the most common. For example, this year, most vaccines will protect against two A strains—H1N1 and H2N3—and two B strains. Consequently, sometimes the vaccines aren’t a good match or people who have been vaccinated still get the flu.

Even with all those factors, getting “the flu shot” every year is still the best, most effective way to protect against becoming infected with the flu virus and has been proven to reduce the risk of flu illnesses—like pneumonia or bronchitis—and hospitalizations.

With that said, the CDC recommends routine annual influenza vaccination for all people who are older than six months old and do not have contraindications.

Taking it one step further, there are certain groups of people who are highly recommended for getting the vaccine every year and include those who are at high risk, have had serious flu-related complications in the past or live with or provide care for high risk people. And that leads to one salient point: people who do not get vaccinated are not just putting themselves at risk. Given that not being vaccinated increases the likelihood of becoming infected, those people who forego vaccination are putting at risk other individuals who are at especially high risk for serious complications.

Against this backdrop, Kiowa County Public Health would like to announce their annual flu shot clinics for 2019. Injectable Quadrivalent Vaccine will be available for both children and adults including High Dose vaccine for adults >65 years of age. Nasal vaccine will not be available.

As stated in the information distributed by KCPH, vaccination to prevent influenza is particularly important for people who are at higher risk for medical complications attributable to severe influenza. Below is a list of all the health and age factors that are known to increase a person’s risk of getting serious complications from the flu:
• Asthma
• Neurologic and neurodevelopment conditions
• Blood disorders (such as sickle cell disease)
• Chronic lung disease (such as chronic obstructive pulmonary disease [COPD] and cystic fibrosis)
• Endocrine disorders (such as diabetes mellitus)
• Heart disease (such as congenital heart disease, congestive heart failure and coronary artery dis- ease)
• Kidney disorders
• Liver disorders
• Metabolic disorders (such as inherited metabolic disorders and mitochondrial disorders)
• People who are obese with a body mass index [BMI] of 40 or higher
• People younger than 19 years of age on long-term aspirin- or salicylate-containing medications.
• People with a weakened immune system due to disease (such as people with HIV or AIDS, or some cancers such as leukemia) or medications (such as those receiving chemotherapy or radiation treat- ment for cancer, or persons with chronic conditions requiring chronic corticosteroids or other
drugs that suppress the immune system)

Other people at high risk from the flu:
Adults 65 years and older
Children younger than 2 years old1
Pregnant women and women up to 2 weeks after the end of pregnancy
American Indians and Alaska Natives
People who live in nursing homes and other long-term care facilities

Those residents who are homebound and cannot physically attend a clinic please call our office to be placed on a list to receive a flu vaccination in your home. If you should have any questions, concerns, or for further information please feel free to call Kiowa County Public Health at 438-5782.