Written by Priscilla Waggoner on 29 October 2019. Posted in News

Next Tuesday, November 5th , Colorado voters will decide on two different measures that will appear on the statewide ballot. The two measures, Proposition CC and Proposition DD, deal with tax related issues. 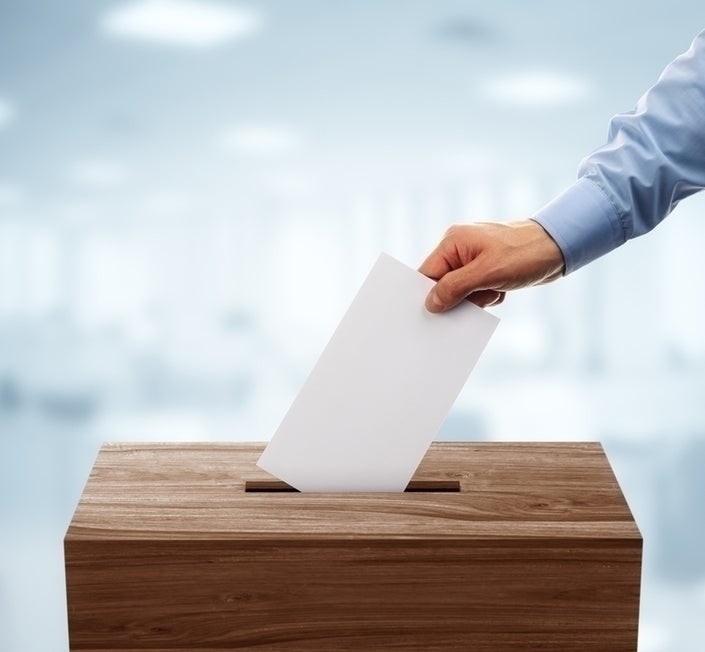 Colorado PROPOSITION CC, the “Allow State to Retain Revenue for Education and Transportation Measure”, relates to the Taxpayer’s Bill of Rights, more commonly known as TABOR. The ballot measure reads as follows:

Without raising taxes and to better fund public schools, higher education, and roads, bridges, and transit, within a balanced budget, may the state keep and spend all the revenue it annually collects after June 30, 2019, but is not currently allowed to keep and spend under Colorado law, with an annual independent audit to show how the retained revenues are spent?

Currently, under the TABOR Amendment passed in 1992, there is a limit to the amount of money the state of Colorado can keep and spend from the total that it collects. Although the computation of that limit is somewhat complicated, the formula essentially sets the state’s spending cap as the baseline. The amount of revenue the state can retain over that spending cap is figured by taking the current inflation rate and adding the percentage the population in the state has changed. The total of those two figures sets the amount the state can retain.

According to TABOR, any revenue received by the state over that limit is not allowed to go into the state’s coffers but is, instead, refunded to taxpayers. 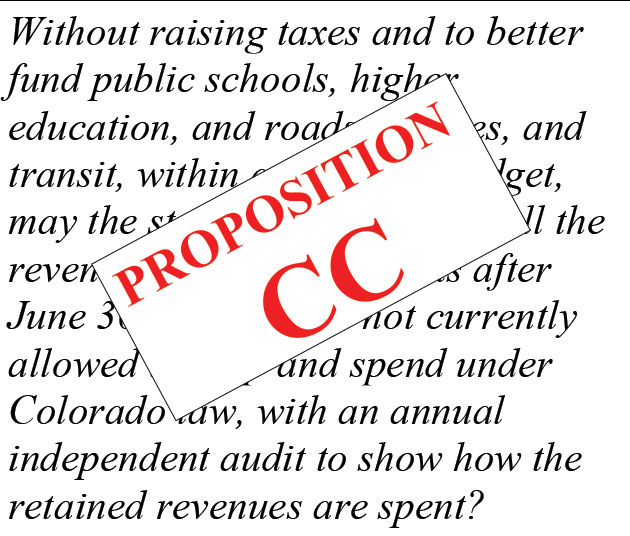 Proposition CC would allow the state to retain the revenue it is currently required to refund with the provision that the revenue would be placed in a special fund--separate from the general fund—where it would only be eligible for spending on education and transportation. The measure would also require the state auditor to hire an independent, private entity to conduct an annual financial audit regarding the use of funds as provided under the measure.

If Proposition CC were rejected and those amounts were refunded to taxpayers according to current law, it would amount to a refund of about $26-$90 per taxpayer.

If Proposition CC passed and the state did not refund the money to taxpayers, the Legislative Council Staff estimates that, for fiscal year 2020-2021, public schools, public higher education, and state and local highway and transit projects would each receive $103 million. In fiscal year 2021-2022, that amount would increase to $114 million.

Although a number of statements in support of the measure have been made, there are two official statements arguing for the passage of the proposition, both of which appeared in the 2019 Blue Book for Colorado voters.

The two arguments supporting Proposition CC read as follows:.
“Proposition CC provides more money for critical investments in Colorado’s future without raising tax rates. By allowing the state to keep the money it already collects, the measure provides needed funding for K-12 education, higher education, and transportation. While Colorado currently ranks in the top third of states in household income, it ranks in the bottom third in per-pupil public spending on both K-12 and higher education. Further, the state’s roads are deteriorating while the cost of improvements continues to increase. Addressing these challenges requires statewide investment, and Proposition CC provides revenue for these investments immediately and into the future.”

“Proposition CC allows elected officials to make better policy decisions while preserving the citizens’ right to vote on any new state taxes and tax rate increases. Because these tax increases will still require voter approval if the measure passes, state government spending will remain limited. Proposition CC simply allows the state government to keep the money it already collects. Similar measures have been approved by voters in most Colorado counties, cities, and school districts.”

Likewise, there have been a number of statements made in opposition of the measure. What follows are the two official statements, also found in the 2019 Colorado Blue Book.

“Proposition CC results in higher taxes by permanently eliminating all state TABOR refunds required by the Colorado Constitution. Taxpayers are being asked to sacrifice their refunds to pay for programs that should already be funded within the state budget. Even with the limit, the state government has already shifted money between funds and raised fees and tolls to increase its revenue faster than inflation and state population growth. Proposition CC will cause government to expand at an even faster pace.”

“Proposition CC continues to erode taxpayer protections in the Colorado Constitution. Instead of asking voters for permission to keep specific amounts of money collected above the revenue limit each year, the state government is asking voters to give up refunds of unknown amounts forever. The measure broadly directs where the new money will be spent, but the specifics can be changed in the future without voter approval. Further, while spending this new money for education and transportation, the legislature could redirect existing funds to any other purpose.”

The editorial boards of newspapers across the stated have weighed in either supporting or opposing passage of Proposition CC. In its support for the measure, the Colorado Springs Business Journal wrote, “TABOR prevents the General Assembly from being able to save adequately for the inevitable economic downturn, so during recessions, the state is forced to cut services. With that extra money... we could improve roads across the state…[and] we could improve educational outcomes for students. We have a growing workforce skills gap, and voting for Proposition CC will support skills development for the future that matches the needs of Colorado businesses."

The Denver Post, which opposes the proposition, raises issues with the revenue being spent outside of regular funding formulas for the foreseeable future. “Colorado lawmakers can do better than Proposition CC,” the statement read in part. “Yes, the state does need this additional revenue. But it’s also critical that this money is spent like the limited resource it is given voters’ unwillingness to provide alternative revenue sources."

A YES vote supports the measure to allow the state to retain revenue above the state spending cap to provide funding for education and transportation.

A NO vote opposes the measure to allow the state to retain certain revenue for transportation and education, thus requiring the state to continue issuing refunds under TABOR when the state collects revenue in excess of the state’s annual revenue limit.

The second measure on the 2019 ballot is Colorado PROPOSITION DD, “Legalize Sports Betting with Tax Revenue for Water Projects Measure”. It reads as follows: 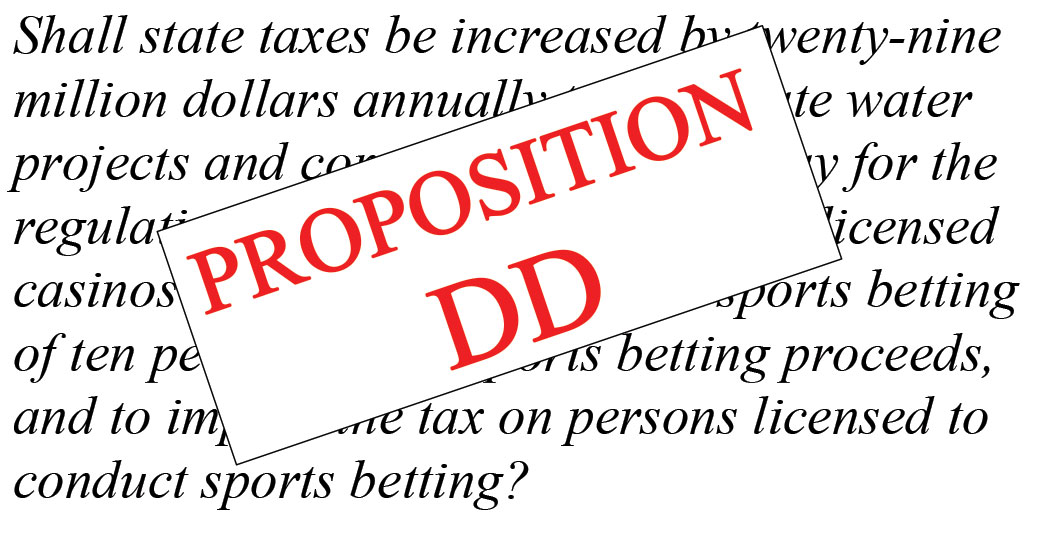 Shall state taxes be increased by twenty-nine million dollars annually to fund state water projects and commitments and to pay for the regulation of sports betting through licensed casinos by authorizing a tax on sports betting of ten percent of net sports betting proceeds, and to impose the tax on persons licensed to conduct sports betting?

Revenue generated from the tax on sports betting would be used to create and fund the Water Plan Implementation Cash Fund and would also fund expenses related to the administration and regulation of sports betting in Colorado.

The proposition, which is a bi-partisan bill with support from a total of 24 legislators—13 Republicans and 11 Democrats in both the House and the Senate—is supported by more than 30 organizations throughout the state that range from the Colorado Farm Bureau, Cattlemen’s Association, Wheat Growers and Dairy Farmers to the Environmental Defense Fund and Western Resource Advocates.

The official arguments in support of Proposition DD state:
“Water is a scarce resource in Colorado, and demand will continue to increase as the state’s population grows. Colorado’s economy and way of life, from urban cities to agricultural communities, will suffer if the state cannot meet its water demands. Revenue from taxes on legalized sports betting would provide much-needed financial support to protect the state’s water resources.”

A second argument for Proposition DD reads, as follows:
“Many Coloradans bet on sporting events now, but because that activity is illegal, they use black market bookies and websites, which are not subject to oversight or regulation. Legalizing sports betting in Colorado will create consumer protections for people who place sports bets, ensuring that they receive their winnings and do not fall victim to fraud or abuse.”

Arguments from those who oppose:
“Proposition DD puts no limits on the amount a person can bet on sports, making it easy to lose a lot of money with just the touch of a button on a smartphone. Of the millions in potential revenue, only $130,000 each year is dedicated to gambling addiction services, and this amount does not grow with an increase in sports betting activity. This small amount of money may not be enough to help people who are harmed by the legalization of sports betting in Colorado.”

A second argument in opposition to the measure reads:
“Proposition DD tries to tackle Colorado’s water needs without providing enough detail or money. Specific water projects are not identified, and some may have potential unintended consequences for the environment and some communities. Additionally, Proposition DD will pay for only a portion of the Colorado Water Plan.”

A YES vote on Proposition DD means sports betting will be legal and taxed in the state, with revenue being used to fund water projects and water-related obligations and pay for the regulation of sports betting, a hold harmless fund, and gambling addiction service

A digital copy of the Colorado Blue Book for 2019 can be accessed by going to the following website: http://leg.colorado.gov/sites/default/files/images/lcs/2019_blue_book_english_for_web.pdf

Polling centers will be open on November 5th from 7am to 7pm, and all ballots must be received by 7pm. To find the polling center for your address, access the following website: https://www.sos.state.co.us/voter/pages/pub/home.xhtml?polling-location