Written by Betsy Barnett on 24 December 2019. Posted in News

John Contreras, who began writing sports articles for the Kiowa County Independent a little over a year ago, was deservedly honored on Championship Saturday at the 56th Annual Lamar Holiday Basketball Tournament as this year’s recipient of the Melvin Hendrickson Award. The long-time sports writer retired a couple of years ago from the Lamar Ledger, and the Independent was then excited to bring him aboard as a string writer. He has been a huge asset to our organization ever since. 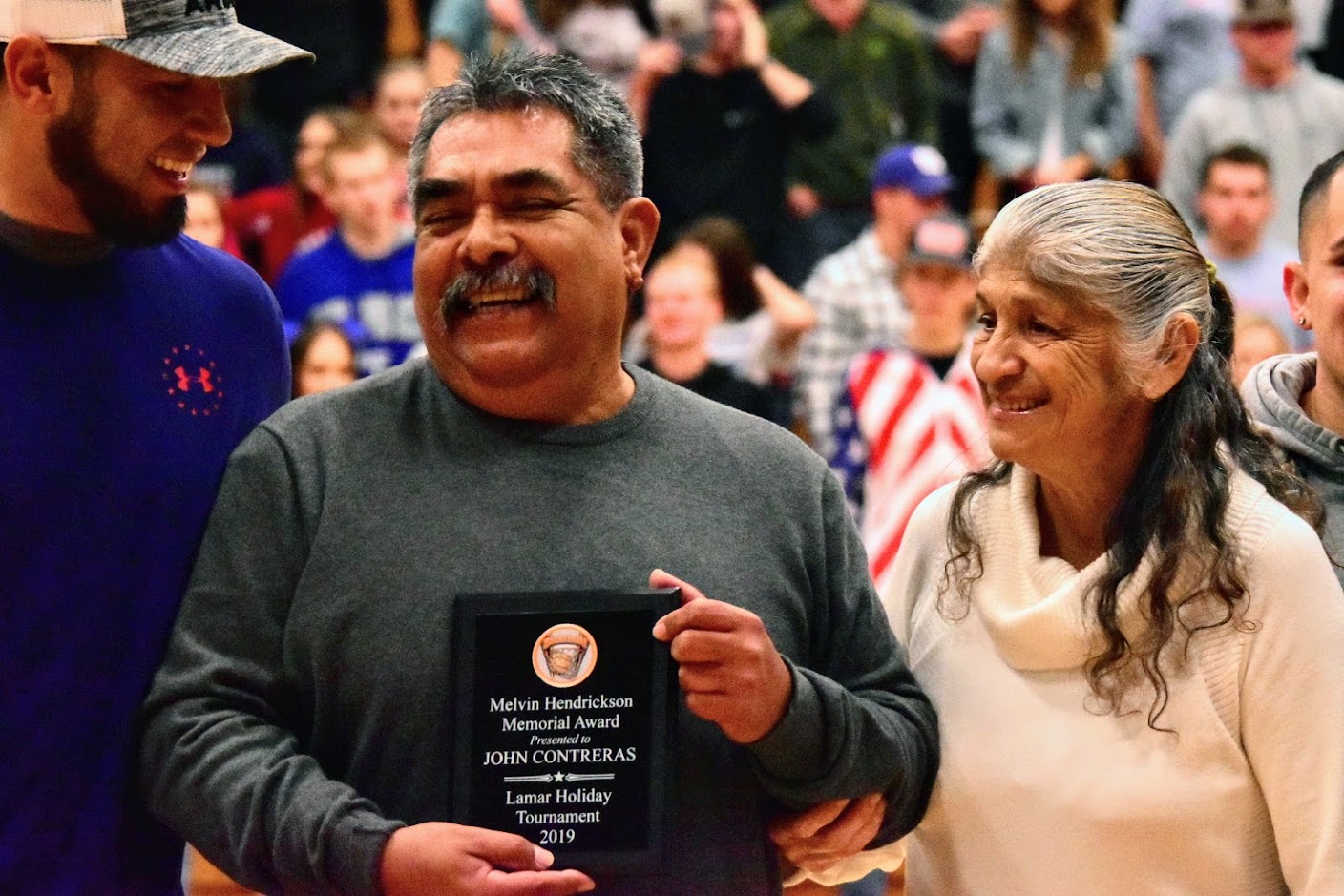 Despite wanting to slow down some, John has actually picked it up as he now strings for the Ledger, as well, and has recently started an impressive sports blog on facebook aptly named John’s Sports Page. The site is literally filled with every bit of sports information a person could ever want to find out about eastern Colorado. For his facebook page John has been showing off the impressive athletics programs we have in this part of the state through the lens of his camera.

The following is the excerpt about John that was read to the large crowd on Saturday night as they deservedly honored him for his hard work and dedication to the athletes of southeastern Colorado. He was accompanied by his proud family and honored for his love of sports that is only matched by the legendary Melvin Hendrickson:

Contreras began with the Daily News and Holly Chieftain in 1975, where he was involved in general production of the weekly Holly Chieftain which was owned by Betz Publishing Company. His duties included nearly all facets of newspaper production, including typesetting, advertising sales and makeup, as well as news and sports writing.

In 1977, Contreras began devoting his efforts almost entirely to sports, covering the many Class A teams around southeast Colorado, and has since covered a wide variety of sports, including the Denver Broncos and the University of Colorado Buffaloes.

When John was named the Lamar Daily News Sports Editor, he stated that he enjoyed covering Class A high school sports and appreciated the help and cooperation he received from the coaches. He did a great job of developing this same relationship and level of cooperation with Lamar High School and Lamar Community College. The Lamar community knew that they could count on coverage from John anytime there was a sporting event in the area.

John Contreras is a native of southeast Colorado, born in Lamar and raised in Holly. His parents are Norbo and Hope Contreras. He is a 1971 graduate of Holly High School. 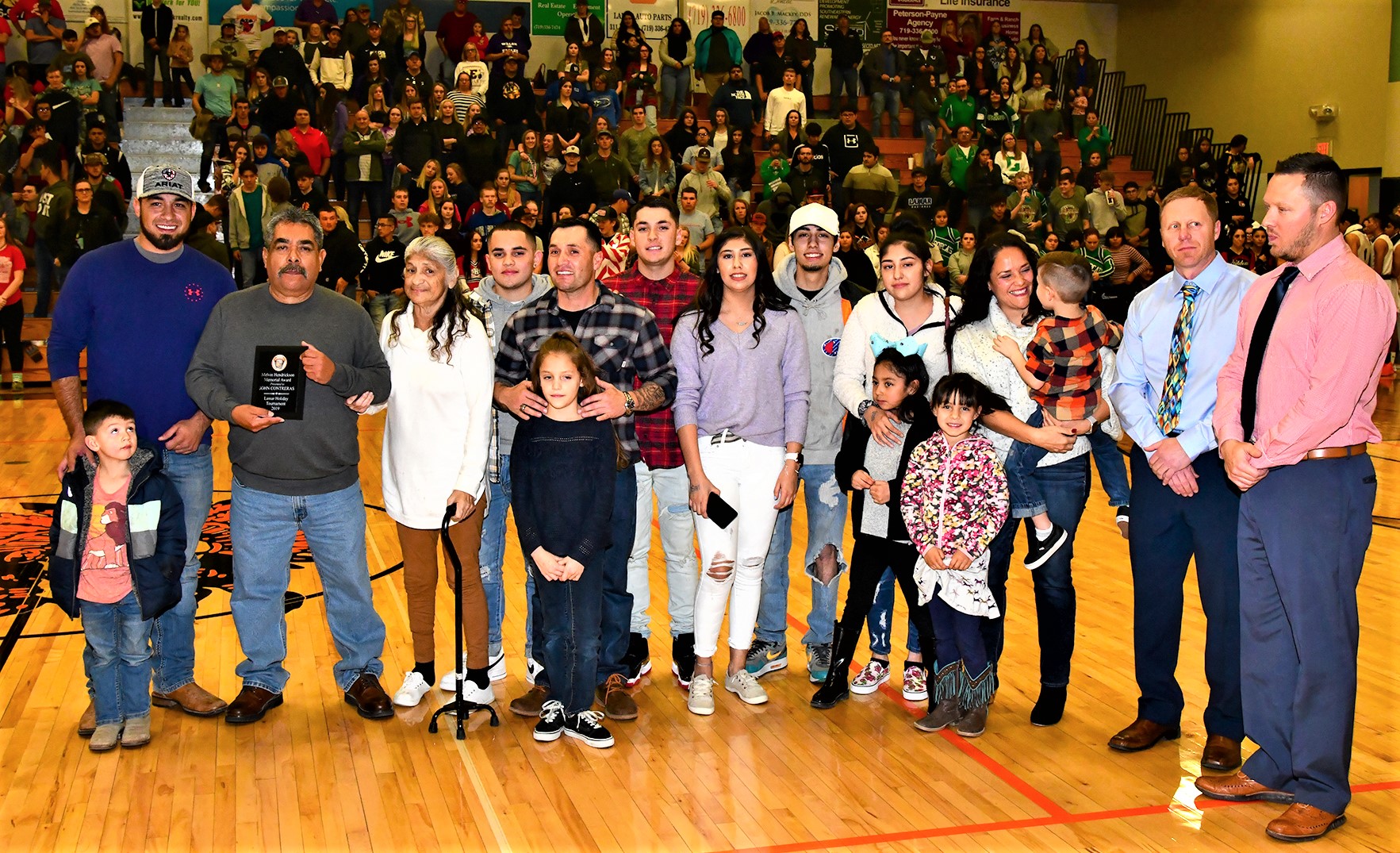 John and his wife, Anita make their home in Holly. John has 3 boys, Anthony, Mike, and Carlos. He has 12 grandchildren and 3 great grandchildren. In his spare time, he enjoys fishing, spending time with his family, and of course watching sports. His dedication and commitment to his family are great, as his son Carlos stated that he never remembered him or his mom missing one of their games. John has been covering this tournament since 1981, and has only missed one Holiday Basketball Tournament within the last 38 years. We would like to thank John Contreras to his contribution, to not only this tournament, but his coverage and support of southeast Colorado athletics for the past 44 years.

When we talked to John after the award he had a lot to say about his experience and his role here in southeastern Colorado.

“It came as a big surprise when I was announced the recipient of the 2019 Melvin Hendrickson Award. It truly is a great honor and I want to thank Chad Debono and Sean Oquist, co-chairman of the Lamar Holiday Tournament, for this acknowledgement. Looking down the list of those who have received this award in the past, I feel privileged to be among their company. Every time I look at the tournament program, that’s the first thing I do is read the list every year. I especially want to thank the coaches and others from the area for all their help during the years. Without them none of this would be possible.I also want to thank Tom and Ava Betz for giving me the opportunity and encouragement to be a sports editor at the paper. They opened the door for me and taught me the ropes. It’s been a pleasure to cover and report on the teams is this area. Without a question, there are some tremendous athletes in this part of the state. I also want to thank my family for their support and their attendance on Saturday night that made it a very special night and one that I will never forget. During the presentation, I turned to the student section to show off my plaque and their cheers were overwhelming. That really meant a lot to me. Again, thanks to everyone that made this award possible. God bless each and every one of you.”

The Independent recognizes John Contreras as a fine example of sportsmanship, determination, and unconditional love for the athletes, competitors and the game.