Written by Priscilla Waggoner on 16 January 2020. Posted in News

With 2019 in our rear view mirror, and one of the more contentious legislative sessions gone along with it, the 2020 legislative session has just begun with elected officials returning to the state capital and comments coming from both sides about the wish to work in a more bi-partisan fashion than the previous year. 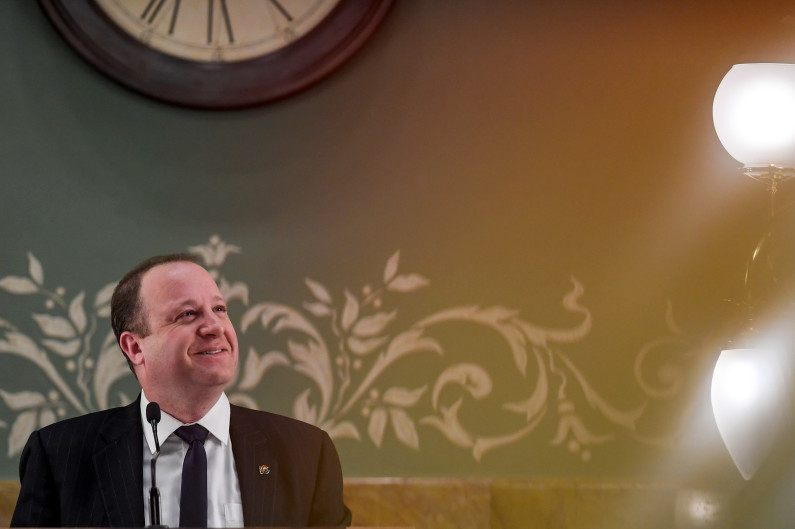 We’ll have to see how that turns out.

Governor Polis, delivering his second STATE OF THE STATE as governor, addressed a large group of elected officials and various civic leaders who had assembled in the state House chamber. He was just a few minutes into his speech when he was interrupted by a group of protestors demanding the governor and lawmakers ban hydraulic fracturing, better known as “fracking”. After law enforcement officers intervened and removed the protestors, which resulted in the arrest of 38 individuals, the governor continued with his remarks.

In his speech, which lasted 57 minutes, Polis touched on a variety of issues, some of which were greeted with applause from both sides of the aisle and some of which…were not.

He urged lawmakers to cut prescription drug costs and renew efforts to find funding for transportation. He also talked about making rural economic development a priority as well as affordable housing.

Those issues greeted with bi-partisan applause included the new free, full-day statewide kindergarten program, a bill that was passed with both Republican and Democratic approval and was one of Polis’ signature 2019 achievements.

Both sides also indicated their support when he unveiled his proposal to provide tax-relief to Coloradoans. “The common thread in the work of my administration is to save Coloradoans money—on education, on health care, on utility bills, on house—and we should save Coloradoans more money on taxes, too,” he said. Polis then introduced his proposal to provide tax-relief. “I am proud to announce we will be creating a bi-partisan study group to make our tax code more fair by looking at ways to broaden the base and lower the rate by the end of my first term. Significant tax relief will lead to more jobs, higher wages and make balancing the family budget that much easier,” he said.

Issues that were not met with bi-partisan approval included his vow to provide universal preschool access for 4 year olds by the end of his term. He also expressed support for starting a paid family leave program for workers across the state, adding that he wants it up and running by early next year—as long as it doesn’t put Colorado at financial risk. It’s predicted that this is one of the bills this session that will be most intensely debated.

Although Polis did not include any language related to oil and gas or fracking, he did acknowledge the issue of climate change, stating, “In the western United States, we see firsthand how a changing climate is already impacting our water supply, our outdoor recreation industry, our farming and ranching communities and our taxpayers.” He then went on to add that all of the twenty worst wildfires in Colorado recorded history have occurred since 2000 with thirteen of those occurring since 2014. 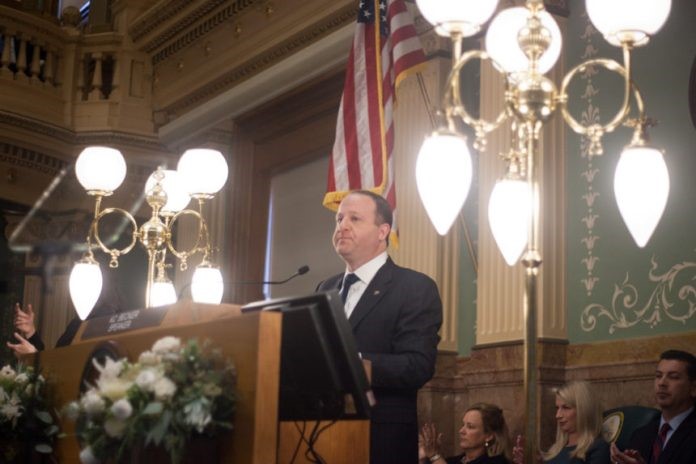 Polis also brought up another one of his signatory issues: a government-managed public health option designed to reduce the costs of health care.

Comments from Senate Minority Leader Chris Holbert suggested that Senate Republicans can support some of the governor’s priorities. “There are plenty of areas in which Senate Republicans can work with Governor Polis,” Holbert said in a statement,” especially when it comes to reducing our income tax rate and reforming our education system.”

However, Polis introduced a robust agenda that will carry a large price tag, especially around universal access to pre-school and transportation, sparking a comment from Senator Dominick Moreno, a Democrat from Commerce City. Moreno is a member of the legislature’s Joint Budget Committee and, as such, helps to write the state budget. “The governor’s completely within his right to make any request he wants,” he said, “but the legislature’s not obligated to give it to him.”

Holbert also expressed his doubts. “It’s hard to understand how all the things the governor talked about will get paid for,” he said.

In the day prior to Polis’ State of the State address, HOUSE DEMOCRATS introduced the first legislation of the second session of the seventy-second General Assembly of the Colorado legislature. Speaker of the House KC Becker (D-Boulder) said in her opening remarks, “We’re excited to continue working across the aisle on behalf of all Coloradans to reduce teen nicotine use, make higher education more attainable, improve school safety and expand economic opportunity in rural parts of our state.” Of special note are the first five bills that were introduced have bi-partisan sponsors and reflect the Democratic caucus’ commitment to involving a broad array of stakeholders in addressing some of the state’s challenges.

HB20-1001 Raising Minimum Age of Sale to 21 for Nicotine and Tobacco Products. This bill would raise the minimum age of sale for cigarettes, tobacco and other nicotine products—including electronic smoking devices (commonly called “vaping”). It would require every retailer of nicotine products to be licensed by the Liquor Enforcement Division of the Department of Revenue, increase compliance checks, prohibit new retail locations within 500 feet of schools and create new fines and penalties for failing to obtain a license or for selling products to people under 21.
Sponsors: Reps. Kyle Mullica (D-Thornton) and Colin Larson (R-Littleton)

HB20-1002 Providing College Credit for Work-Related Experience would require the Commission on Higher Education to create a model to award academic credit for work-related experiences. The credits would be acceptable and transferable across all state institutions, improving access and affordability for non-traditional students.
Sponsors: Reps. Barbara McLachlan (D-Durango) and Mark Baisley (R-Roxborough Park)

HB20-1004 Expanding Access to Wildfire Mitigation Assistance
HB20-1004, which advanced from the Wildfire Matters Review Committee, would establish a grant program to conduct outreach to landowners in high wildfire hazard areas of the resources available for wildfire mitigation. The bill also extends the income tax deduction for wildfire mitigation efforts to 2024 and allows landowners to deduct 100 percent of their costs, up from 50 percent, up to $2,500.
Sponsors: Reps. Lisa Cutter (D-Jefferson County) and Perry Will (R-New Castle)

HB20-1005 Improving the Safe2Tell Program
The bill, which advanced from the School Safety Interim Committee, would improve the Safe2Tell program by ensuring that individuals in crisis can rapidly access crisis counseling. It would also align the process for routing all types of incoming tips and adjust the annual advertising campaign to raise awareness about the program and reduce its misuse. Finally, it would enhance law enforcement’s ability to prevent imminent physical harm to Colorado’s students.
Sponsors: Reps. Dafna Michaelson Jenet (D-Commerce City) and Kevin Van Winkle (R-Highlands Ranch)

HB20-1009 Suppressing Court Records During Eviction Proceedings
HB20-1009 would create an automatic suppression of court records while eviction proceedings are ongoing so that they do not become public until after the final court order is entered. It would also remove these court records from public view if an eviction filing is dismissed, ensuring Coloradans and their families can access safe, affordable housing.
Sponsors: Rep. Dominique Jackson (D-Denver)

HB20-1010 Ending Prison Gerrymandering in Colorado
The legislation, for purposes of census redistricting counts, would reassign prisoners in correctional facilities to their last known residence in Colorado prior to incarceration. Prisoners are currently assigned to voting districts based on where they are incarcerated instead of where their lives are based, even though they cannot vote.
Sponsors: Rep. Kerry Tipper (D-Denver)

It’s anticipated that additional legislation to be introduced will be met with significant resistance, such as paid family medical leave or Polis’ public health option, which could potentially have a negative, disparate impact on rural hospitals, many of which are struggling and, in some cases, operating in the red.

However, for now, voters may witness collaboration and co-operation in state legislators.

And when a tone of contentiousness returns to the capital, and it undoubtedly will, it might do all of us well—citizens and lawmakers alike--to remember that it is through healthy, respectful debate and vigorous civic discourse that democracies are only made stronger. Differences in opinion are not, in and of themselves, something to be avoided as people who have strong and opposing views on topics can also be equally viewed as people with integrity and the best of intentions.