Written by Priscilla Waggoner on 12 February 2020. Posted in News

In a press release issued last week, it was announced that the Bureau of Reclamation is allocating money from this year’s funds to continuing work on the Fryingpan-Arkansas Project, known locally as the Ark Valley Conduit. The amount allocated totals $28 million, which is roughly 5% of the project that carries a price tag of $500 million. 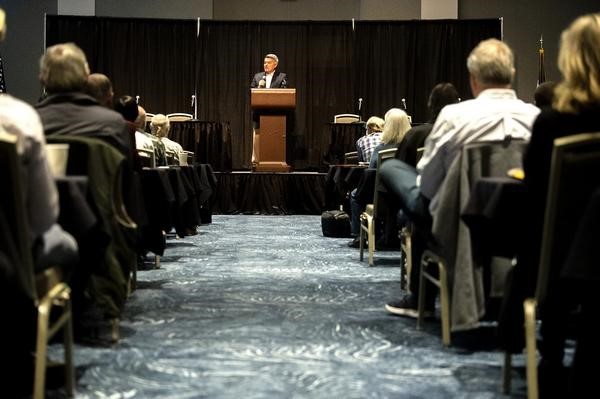 Danny Richards, a water consultant familiar with the project, is both skeptical and optimistic about the funding. “Twenty-eight million dollars is about enough money to dig a ditch,” he says. “But it gets the project started, and that’s important. The federal government doesn’t like to leave water projects undone.”

The Fryingpan-Arkansas Project, a large infrastructure project that diverts water from the western slope to southeastern Colorado, was first identified as a need in the 1950s. After much lobbying on the part of Colorado senators both within the state and Washington D.C., the project was finally set as a priority in 1962 when President John Kennedy came to Pueblo and signed the bill into law in person. Significant parts of the massive project were completed over the following decades, including the construction of several dams and a hydroelectric water plant. But 50 years later, the final phase is still undone, and that phase is of great importance to people of southeastern Colorado. Known as the Ark Valley Conduit, the project calls for construction of a conduit that would take water from Pueblo Dam and, via a 133 mile conduit, deliver it to residents in the region.

A recent study released by the Colorado Department of Public Health and Education revealed that drinking water in certain areas of the Arkansas Valley tests above maximum safety level in radionuclides, which health officials recognize as a concern. The water from Pueblo Dam tests far below those levels and other solvents, as well.

Colorado legislators from both side of the aisle have been long time advocates for funding the Ark Valley Conduit with efforts dating back more than 6 years from representatives Scott Tipton (CO-03) and Ken Buck (CO-04) plus Senators Michael Bennet and Cory Gardner with varying levels of success. Much of money spent so far has been devoted to studies that are prerequisite to starting construction. However, this most recent allocation suggests that actual construction may begin.

“Access to clean and reliable water is critical to Coloradan families, and for years, the Colorado delegation has worked to secure funding for the AVC Project,” said Tipton. “Completion of the Fryingpan-Arkansas Project has been a top priority during my time in Congress and I am grateful the BoR has made good on its word to prioritize the needs of economically distressed regions, especially those in Colorado. I am proud to have worked with the local water conservation districts, my colleagues in the House and Senate, and the members of the Trump Administration to get this project closer to the finish line.”

“Colorado is known for its crystal-clear streams, but for nearly 50,000 people in Southeastern Colorado, access to fresh drinking water has been a challenge,” said Buck. “That’s why I’m extremely grateful to announce that after years of fighting for clean drinking water in the Lower Arkansas Valley, we have secured $28 million in funding to start construction on the Arkansas Valley Conduit.”

Background:
April 30, 2015 – Buck spoke in support of the Tipton amendment on the House floor
October 11, 2019 – Reps. Tipton and Buck and Sens. Gardner and Bennet send letter to OMB asking the department to secure the funding necessary for AVC completion.
April 1, 2019 – Reps. Tipton, Buck and DeGette send letter to House Appropriations Committee requesting the prioritization of the completed AVC Project
April 12, 2018 – Tipton and Buck send letter to Sec. of Interior regarding the lack of funding to the project during FY 2019
March 8, 2017 – Tipton testifies before the House Appropriations Energy and Water Subcommittee on behalf of the AVC
July 11, 2015 – House passes Tipton-Gardner amendment to ensure completion of the AVC
August 9, 2013 – Tipton joins letter to Assistant Secretary of Interior requesting adequate funding for AVC in future budget proposals