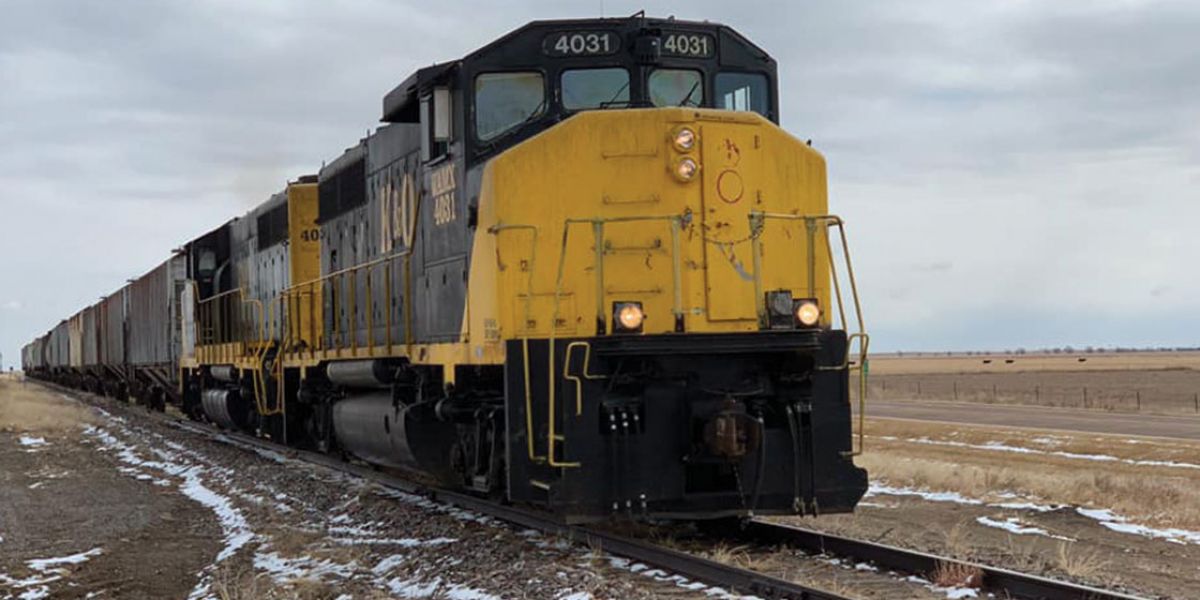 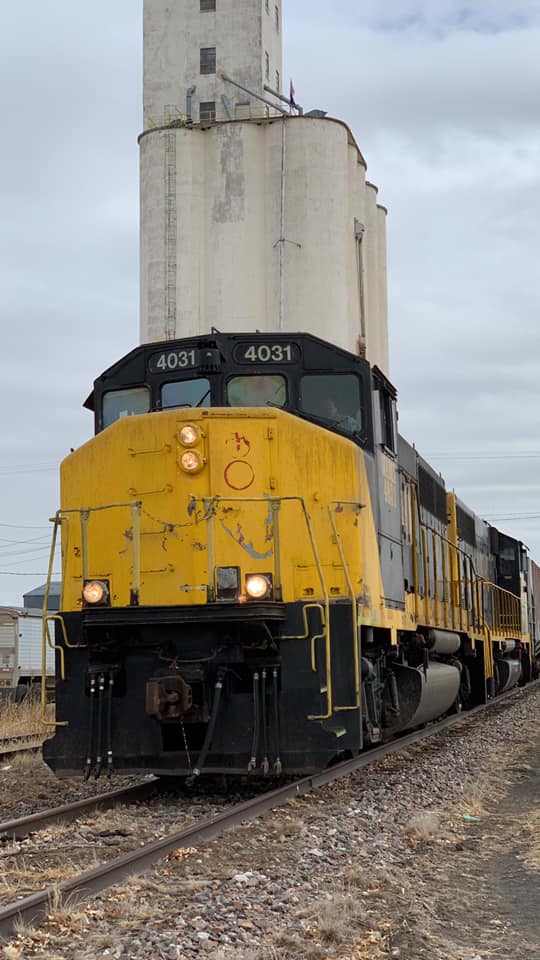 In many ways, Stefan Soloviev, owner of the Colorado Pacific Railroad, is an enigma. He’s a forty-something real estate billionaire from New York who’s been intensely interested in farming and ranching since he was a little boy. He’s an ambitious, savvy businessman who speaks most readily not of his fortune but of being the descendant of a famous 19th century Russian philosopher who wrote about the synthesis of religious philosophy, science and ethics. While he does not make himself accessible to significant, powerful members of the media, he readily gives interviews to the local community newspaper and responds to instant messages on Facebook from farmers in southeastern Colorado, even while he’s vacationing with his family in Iceland.

Enigmatic as he may be, one thing seems to be agreed upon by those who know him best. “If Stefan says he’s going to do something, he does it.”

That observation was put to the test when, roughly 4 years ago, Soloviev told the Kiowa County Independent that he was working to bring back to life a stretch of railroad known as the Towner Line. The rail line, which had been shut down 30 years before, was literally on the verge of being salvaged by a company for its steel tracks when Soloviev offered to purchase the rail line. The offer was refused, so Soloviev (via several very smart attorneys representing Colorado Pacific) took the issue to the Surface Transportation Board (STB), the federal agency that is responsible for economic regulation of railroads and other modes of surface transportation. In a document called a “Feeder Line Application”, Colorado Pacific made the case for why, at a number of levels, there was strong justification for an operational railroad to service the communities, farmers, shippers and other parties along the line and beyond. The document requested the STB to “direct” V&S to sell the Towner Line at a fair market price agreed to by both parties as well as STB.

After a lengthy and expensive legal battle, the company was directed to sell and, in 2018, the Colorado Pacific became a reality. The battle had been won. The trains would, indeed, come back. As Soloviev said in a text, “It’s been saved.”

Since then, Colorado Pacific has invested $3,500,000 in rehabilitating the track and getting approval for new signage along the line, with the last set of proposed changes being finalized in January of 2020. A test run of the line from Haswell to Towner took place on Tuesday.

By April 1, 2020, the 122 miles of the Towner Line should be open for running freight to NA Junction, the end of the Towner Line, which is 26 miles east of Pueblo. In the interim, Colorado Pacific has been working with Union Pacific (UP) and BNSF, both of which have trackage rights, to restore that interchange. Once that’s negotiated, trains should be able to run to and from Pueblo on the Towner Line.

Soloviev farms land in Kiowa, Prowers and Cheyenne counties, so the automatic assumption may be that he was doing it solely for his own personal gain. That’s an understandable part of any businessman’s motivation; however, that was not the first answer he gave when asked, in that same interview several years ago, about his motivation. Why? Why would he do it?

“People in Denver don’t even look at Eastern Colorado as part of the state,” he said at the time. “For them, it’s all about the Front Range and the mountains, and, to them, eastern Colorado is just part of Kansas. I’m going to do everything I possibly can to change that. The people in Kiowa County are honest, hardworking people. I’m proud to call them my friends. I don’t know how much of an impact I can have, but it’s my goal to put that part of the state back on the map again, where it deserves to be.” Toward that end, Soloviev added, “Someday, I hope to give the farmers there some good news. Some very, very good news.”

To those individuals who have read previous stories in the Independent about Stefan Soloviev and the Colorado Pacific, much of this is familiar. But it’s worth retelling because context is always important when considering the bigger picture. And the bigger picture is exactly what this is all about. In other words, the story ain’t over. Not by a long shot—a shot so long that it might, just might, end up being several hundred miles long. 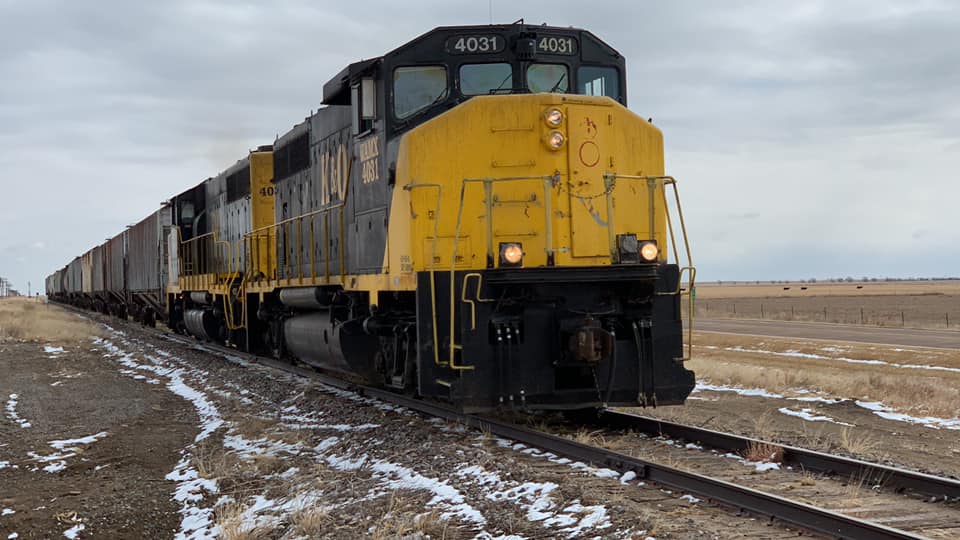 In the November 20, 2019 edition of the Independent, it was reported that the Colorado Pacific Railroad had made an offer to purchase from Union Pacific Railroad (UP) the Tennessee Pass Line for the sum of $10,000,000.

On December 30, 2019, UP declined Colorado Pacific’s offer. In a letter from Mr. Chris D. Goble, Assistant Vice President – Real Estate, UP stated in part that “[w]e are in active discussions with other parties to restore service on this line, and we intend to see these discussions through before we explore other options.”

Upon receiving the letter, representatives working on behalf of Colorado Pacific made inquiries to CDOT, shippers along the line, short line railroads and other parties but could find no evidence of any such “discussions” taking place.

At that point, some, maybe most, may choose to stop all activity. Not Stefan Soloviev and the Colorado Pacific.

On February 14, 2020, Colorado Pacific submitted to the Surface Transportation Board a Feeder Line Application requesting the STB to direct the Union Pacific to sell to Colorado Pacific the Tennessee Line Pass, described as a “continuous 228.80-mile line of railroad and 58.23 miles of other tracks running between UP milepost 118.20, near Pueblo, Colorado and milepost 341.9, near Dotsero, Colorado…for a price not less than the line’s constitutional minimum value which [Colorado Pacific] estimates to be the Net Liquidated Value of $8,835,833

And again, the same question begs to be asked. Why?

The broad answer to that question can be found in the pages of the application submitted by Colorado Pacific, which states, “The owners of …Colorado Pacific Railroad are committed to the restoration and improvement of freight railroad service on formerly active major railroad lines in the Western United States for the purpose of creating new rail transportation opportunities for rail shippers in that area of the country.”

In language more specific to people in this part of the country, William Osborne, general counsel for Stefan Soloviev, made this statement. “Mr. Soloviev is taking this step because a substantial portion of the time, eastern Colorado and western Kansas grain producers will get better prices if they ship using the shortest railroad route to the West Coast, instead of the Texas Gulf Coast, for the export market.”

To focus in more closely, should it be sold to Colorado Pacific Railroad, the Tennessee Pass Line has potentially great significance to farmers in western Kansas and eastern Colorado geographically and, consequently, economically.

In terms of sheer geography, Colorado Pacific owns the 122 mile stretch of railroad from Towner to NA Junction. They are also negotiating with UP and BNSF for trackage rights for the 26 mile stretch between NA Junction and Pueblo. Once in Pueblo, if Colorado Pacific is allowed to purchase the Tennessee Pass Line, the railroad would have access—through both direct ownership and purchase of trackage rights to part of the line currently owned by another company—all the way to Dotsero. In other words, freight trains would have a “straight shot” from Towner to roughly 400 miles west.

The fact that the route would lead to Dotsero is just as significant as the route taken to get there, for it is in Dotsero that trains have the option of traveling on UP/BNSF lines to Salt Lake City. And, from Salt Lake City, trains can either travel to ports in the northwest or due west to ports on the western coast.

Shipping grain off the west coast of the United States directly to major global markets in China and Southeast Asia is significantly shorter than shipping out of the Gulf Coast of Texas, which requires traveling south, through the Panama Canal and then east.

As the saying goes, in freight, time is money. Within the US, currently grain shipped off the west coast from this area essentially goes east for 250 miles to Hutchinson, Kansas and then, through various routes, heads west again for 250 miles with no net progress to the west. Additional circuitous routes make the distance even longer, which are too numerous to explain for the purpose of this article. Suffice it to say that added miles that don’t add to distance traveled translates into added expense to ship. 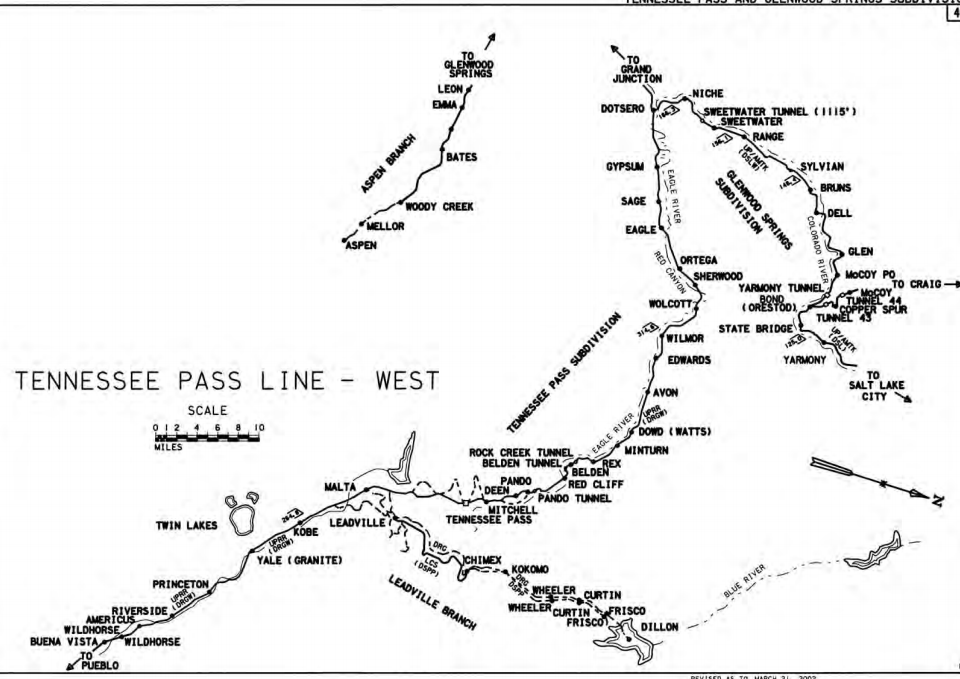 All of that time, distance and money becomes moot if the Colorado Pacific is allowed to buy the Tennessee Pass Line.

So, what is the likelihood that the STB will direct UP to sell the Tennessee Pass Line to the Colorado Pacific or, if so directed, UP will appeal the decision, which might result in yet another lengthy amount of time as the Colorado Pacific makes the case to force the sale? Difficult to say.

Perhaps the situation, at this point, is best summed up in one of two ways. As William Osborne says, “This filing means that someone will restore the Tennessee Pass line to service, whether it be UP, some other railroad company it sells to, or Colorado Pacific.” Or, perhaps, as those close to Stefan Soloviev state, “If he says he’s going to do something, he does it.”

Only time will tell.