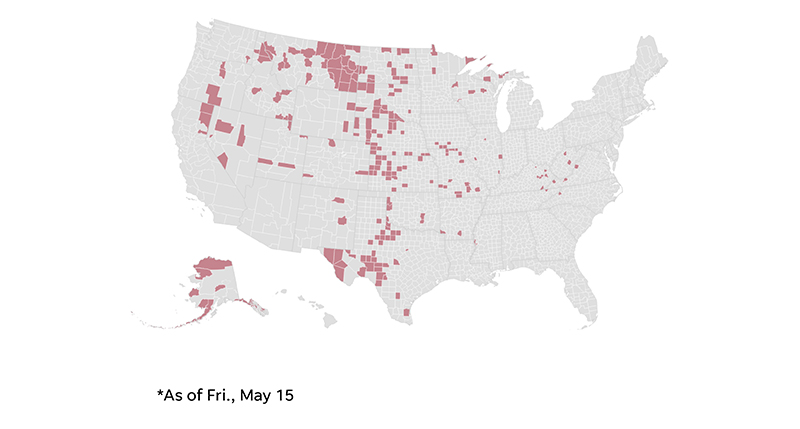 On May 9th, Bent County Public Health Department reported its first case of COVID-19, making Kiowa County the only remaining county in southeastern Colorado and one of only four counties in the entire state to have no reported cases of the virus.

When asked to what she attributes the lack of virus—a question also asked of her by both KMGH Channel 7 and the Denver Post last week—KCHD CEO Char Korrell provided an explanation that’s becoming more and more accepted across the nation.

“I think it’s partly because of our location,” Korrell stated. “We’re pretty isolated out here and more than a hundred miles away from any areas that have a big population. With the exception of people stopping at Love’s or the Gas and Grill, we’re just not exposed to that many different people. Less exposure to different people means less exposure to the virus.”

In other words, it could be said that social distancing is a way of life in Kiowa County.

An analysis of data conducted by USA TODAY and printed in their May 18, 2020 issue offers support for Korrell’s assertion. According to the analysis, there are 231 counties in the nation that report no positive cases, and all are scattered across the southern, midwestern and western regions. Of those 231 counties, 90% are in areas described as “overwhelmingly rural with isolated, sparse populations” and five or fewer homes per square mile and a population of around 5,000 people.

The number of cases appears to be proportional from there on. In counties with 10 or less people per square mile, the rate is 12 positive cases per 10,000 residents. In counties with 100 or more people per square mile, the numbers of cases is 35.4 positive cases per 10,000 residents—an increase of more than three times.

Contrast those numbers with Kiowa County where there is less than one person per square mile, and the argument for isolation as a prevention from getting the virus is even stronger.

Kiowa County has tested 62 people with zero positive results. Given the county’s population, that factors out to 44.2 people per 1,000 residents.

That leads to what is perhaps the most logical yet inexplicable explanation of all: luck.

“To be honest,” Korrell admits, “we haven’t done anything differently or better than anyone else. I think basically we’ve just been really lucky.”

Great, except there’s one thing about luck that can’t be ignored. Luck can change at any time and without notice.

Although the numbers of positive cases in the counties surrounding Kiowa County are relatively low, they are slowly on the rise.

For weeks, Prowers County had reported just a few cases when, somewhat suddenly, the number increased to 10. Crowley County was steady at 2 positive cases when 37 inmates at the prison tested positive for the virus, bringing their total to 39. Cheyenne County was case free until a cluster of positive cases were connected to a construction site. Although all those individuals returned to the Front Range where their numbers were included in their county of residence, there are now 5 positive cases in Cheyenne County. It’s not know if they’re connected to the previous cases or not.

Even as this article is being written, the number of positive cases in Bent County has increased from one case to two as a 60 year old resident at the Bent County Healthcare Center, a nursing and long term care facility, tested positive for the virus despite being asymptomatic. Testing at the facility is now being conducted, and it’s anticipated that all residents and employees associated with the facility will have been tested by Wednesday with results arriving very shortly thereafter. It should also be noted that this positive case has no relationship to the positive case reported roughly 10 days ago.

And that brings us to the current and most pressing concern felt by a number of officials in public health.

For those individuals who are younger than 65 years of age and have no pre-existing conditions, Governor Polis’ executive order to Stay-at-Home expired on April 26th . Its replacement, Safer at Home, was put in place the following day and is scheduled, for now, to expire on May 26th.

Even though current measures are much less restrictive than a month ago, Governor Polis and other public health officials continue to make the same point: the virus is just as contagious and just as present in communities as it has been since it first came to Colorado. The purpose of social isolation was starkly clear from the beginning: to make certain that there would be a bed available in a hospital for anyone who became infected and needed medical care.

Nonetheless, counties across Colorado are “phasing” into re-opening, with strong pressure being exerted from different sectors to re-open everything immediately with a goal of returning to “normal life”.

Health experts say that is not a realistic possibility until one of three things occur. A vaccine must be developed, which is not a given, at this point. The population obtains “herd immunity”—meaning that enough people have been infected that the virus has no way to stay at epidemic levels; however, that requires 80% to 90% of the population being infected and we currently stand at roughly 2% to 3%. Or third, effective therapies would need to be developed. With the exception of a drug called Remdesivir, which only moderates the symptoms, there have been no promising developments in that area as of yet.

That leaves us essentially right back to where we started: the public dealing with a highly contagious virus that has a fatality rate approximated to be 10 times higher than the flu and virtually no immunity in the community.

That also makes health care professionals like Korrell very nervous. Just as social distancing reduced the numbers of people becoming infected, increased contact that comes with relaxed restrictions, greater amount of travel and people disregarding the use of masks likewise increases the risk of infection.

“Currently, we don’t have any positive cases,” Korrell states, “and that’s a wonderful thing. But do I expect us to stay there, especially with more people from more places now coming into the county? No. I don’t.” The data from the USA TODAY analysis supports that notion.

For today, at least, Kiowa County is at zero. It’s anyone’s guess how long we’ll stay that way.