TEN WEEKS AFTER: What We Know and Don’t Know About the Officer-Involved Shooting of Zachary Gifford

Written by Priscilla Waggoner on 17 June 2020. Posted in News 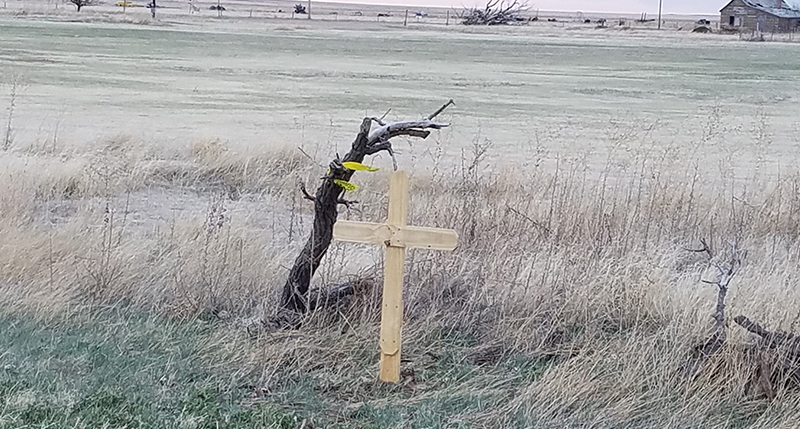 It’s just a few days shy of 10 weeks since Thursday, April 9th, when local resident, Zach Gifford, was shot and killed by KCSO Undersheriff Tracy Weisenhorn and Deputy Quentin Stump. According to officials, the investigation is still “on going” while Weisenhorn and Stump remain on paid administrative leave.

However, with two and a half months having passed since the fatal shooting and national attention focused on current police shootings in other states where the public is informed of preliminary action taken by police departments within just a few days of an incident, multiple Kiowa County residents are asking more and more when they will learn just exactly what happened on that April afternoon in Brandon and what will happen next.

What follows is a brief summary of what is known at this point in time. Unfortunately, it’s clear that what we don’t know far outweighs what we do.

News of the shooting was made public on the 9th via several press releases. One, run by the Associated Press, stated, “…two sheriff’s deputies in rural southeastern Colorado were involved in a fatal shooting. Officials with Colorado’s Division of Homeland Security and Emergency Management say the Kiowa County deputies shot the suspect after using a stun gun during a traffic stop Thursday afternoon.”

There was no mention of a stun gun being used, neither did subsequent press releases, all issued by CBI as the media contact for the incident. When asked if a stun gun was used, the communications director with CBI would neither confirm nor deny, stating only that “less lethal force was used”.

The next day, on April 10th, CBI sent out a press release that provided the most information at that point and stated: “Law enforcement continues to investigate an officer-involved shooting in Kiowa County, Colorado at 3:00 p.m. on Thursday, April 9, 2020.

Two members of the Kiowa County Sheriff’s Office (KCSO) made a traffic stop of the driver of a pickup truck at the intersection of Colorado State Highway 96 and Main Street in the town of Brandon on Thursday afternoon.

During the course of the traffic stop, the male passenger of the truck attempted to flee from the scene on foot. Following a struggle between the deputies and the passenger, shots were fired, striking the man.

The 39-year-old Eads man was pronounced deceased at the scene. His name is being withheld pending the notification of family. No members of law enforcement were injured during the incident.

The Prowers County Sheriff’s Office (PCSO) and the Colorado Bureau of Investigation (CBI) were requested to investigate the officer-involved shooting along with the 15th Judicial District Attorney’s Office.

CBI agents and PCSO investigators are in the process of conducting interviews, while members of CBI’s Forensic Services are finishing processing the scene.

The two deputies involved in Thursday’s incident have been placed on administrative leave per KCSO policy.”

Over the next five days, no additional information was released on the incident despite multiple emails and questions being submitted to CBI. Admittedly, many of the questions related to specifics that were still under investigation, allowing for the refusal to answer being a credible response. However, even benign questions, such as the number of CBI agents investigating or the nature of the DA’s oversight in the investigation, were not answered.

As the lead investigative agency, the Prowers County Sheriff’s Office (PCSO) continues to review the incident. Colorado Bureau of Investigation (CBI) agents and crime scene responders have concluded the processing of the scene as well as interviews as an assist agency in the investigation.

The members of the Kiowa County Sheriff’s Office (KCSO) involved in the incident have been named: Undersheriff Tracy Weisenhorn and Deputy Quentin Stump remain on administrative leave per KCSO policy.

No additional updates will be provided until the investigation is completed by the PCSO and information is presented to the 15th Judicial District Attorney’s Office for a decision.”

It took six days for investigators to release to the public the name of the deceased and the two officers involved in the shooting.

On May 8, in response to a request from the Independent based on the Colorado Open Records Act, the Kiowa County coroner released the report of the autopsy performed on Zachary Gifford.

The report deems Gifford’s death a homicide, which means it was caused by another person or persons, and concludes that he died as a result of the “multiple gunshot wounds”.

On May 14, roughly 4 weeks after the last press release from CBI was issued, the Kiowa County Sheriff Department released more information to the public, described as “a basic chronology of events of the incident, an overview of investigative steps that have been completed to date, and a snapshot of next steps in the case in an effort to provide as much clarity as this active investigation will allow.” Also attached to the press release was the Use of Force and Administrative Leave policies for the sheriff’s office.

That timeline, further described as “a basic timeline of the factual events, as we know them” read as follows:

2:45 p.m.-- Kiowa County SO personnel initiated a traffic stop on a vehicle occupied by Zach Gifford and another person.

4:00 p.m.-- CBI was notified just before 4:00 p.m. Three agents from Investigations and a crime scene analyst were sent to Kiowa County to assist. Prowers County Sheriff’s Office was designated as the lead investigative agency.

7:00 p.m. -- The first CBI agents arrived at the scene and began interviews and scene processing.

Clearly, significant events—events that had been previously described in the various press releases distributed to the media—are notably absent from the chronology contained in KCSO’s press release.

In addition, the Administrative Policy that was released to the public is less than one page long, is largely limited to timekeeping procedures and, aside from the statement that personnel may not leave the county without notifying and receiving permission from a supervisor, provides no specific instructions regarding procedures for law enforcement officers who are on administrative leave, especially when on leave because of a serious incident, such as an officer involved shooting resulting in a fatality. There are no restrictions on behavior contained in the policy, such as wearing a badge while in public, carrying a weapon or the use of sheriff office vehicles. There is also no reference to any other policy where that information may be found.

Taking the information that’s been communicated to the public as a whole illustrates several points worthy of consideration.

A period of ten weeks has passed during which there has been, at best, limited information released to the public regarding the shooting death of a local man. Ten weeks is a very long time. Three press releases, several of them allegedly coming from the same law enforcement agency, have been shared with the public, yet they contain inconsistencies that have been neither addressed nor clarified. And the administrative policy—released to the public for the purpose of providing information about what can be expected of deputies while on administrative leave—provides no information that helps to inform the public about what may or may not be permissible regarding the deputies’ behavior while on leave.

What is known, at this point, is that not much is known. What remains to be seen is when and how the public will finally be informed about the events that cost Zachary Gifford his life.