Written by Priscilla Waggoner on 24 June 2020. Posted in News

The investigation into the April 9 fatal shooting of Zachary Gifford by KCSO Undersheriff Weisenhorn and Deputy Stump has been completed and presented to District Attorney Josh Vogel with the 15th District Court. In an email Monday morning, Vogel stated that his office is currently reviewing the information that was submitted, and no decision has been made at this time. He further stated that his office received the entirety of the file approximately ten days ago. 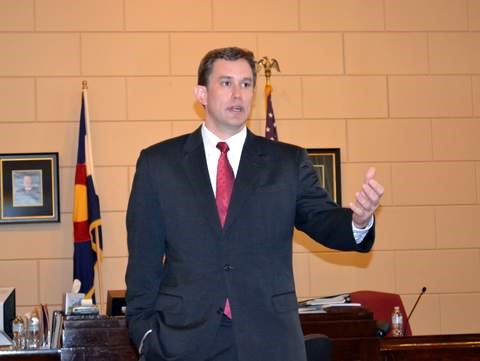 Depending upon his review of what he received, the district attorney has three different courses of action before him.

He can choose to file charges against one or both of the officers involved.

He can refer the matter to a grand jury investigation where he would present evidence in an attempt to show that the officer(s) believed to have committed the crime actually committed the crime. The grand jury does not determine innocence or guilt but only decides if there is probable cause to file charges.

As a third option, the district attorney may decide not to file charges, in which case he’ll announce his decision in a public statement along with, as required by state statute, the release of a report that explains his findings including his reasons for deciding to not charge the officer(s) involved with any criminal conduct.

DA Vogel did not provide any information on when his office anticipates completing their review of the investigative file and making a decision.

At this point, it’s difficult to ascertain the type and extent of evidence the district attorney may be reviewing, especially given the lack of details released to the public by the investigating agencies.

As has been previously reported, public knowledge is limited to what can be pieced together from a handful of press releases. We know that, at 2:45pm on the afternoon of April 9, the driver of a pickup truck was stopped by KCSO law enforcement officers at the corner of Highway 96 and Main in Brandon. Over the next 12 minutes, events transpired that resulted in a phone call at 2:57pm to dispatch that “shots were fired”, shots that would ultimately be ruled as the cause of Zach Gifford’s death.

What happened during those 12 minutes forms the crux of the incident, and, to date, they have only been summarized in two simple sentences, first released in a CBI press release on April 10 and repeated in their final press release as an assisting agency on April 15.

“During the course of the traffic stop, the male passenger of the truck attempted to flee from the scene on foot. Following a struggle between the deputies and the passenger, shots were fired, striking the man.”

The investigation of the fatal shooting began the same day the incident occurred. Prowers County Sheriff Office was designated as lead investigative agency; the Colorado Bureau of Investigation (CBI) was called in at 4pm to assist and serve as the media contact for the incident. By 7:00 that night, three agents with CBI’s Investigation unit and a crime scene analyst were in Kiowa County, processing the scene and conducting interviews.

On April 15, six days after the shooting, a press release was issued by CBI, stating “CBI agents and crime scene responders have concluded the processing of the scene as well as interviews as an assist agency.” That release also stated that “As the lead investigative agency, the Prowers County Sheriff’s Office (PCSO) continues to review the incident.”

A May 14 press release from the Kiowa County Sheriff Office provides more insight into what kind of evidence may exist, including “body-worn camera footage” and “physical evidence” that “has been collected, and some of it is awaiting further analysis by the CBI Forensic Services Laboratory.”

In that same press release, it’s also stated that “interviews of all involved parties have been conducted”. As far as what is publicly known of the incident, itself, there were four people with direct knowledge of the incident, only three of whom are still living: the driver of the truck and the two deputies. The fourth person, Zachary Gifford, was killed.

However, autopsy reports do not address the cause of injury, only the method.

That report also states that Gifford died of multiple gunshot wounds and the fatal wounds were the result of the actions of another person or persons.

Even with those facts, many of which are already familiar to people from previous reporting, there remain questions that go unanswered.

The driver of the truck, and the one allegedly responsible for committing a traffic violation, is not mentioned in any context other than the individual driving. How did Zach Gifford, who was only a passenger in the truck, become the focus of the deputies’ attention?

Was Gifford instructed to exit the truck, or did he exit on his own? If he exited on his own, what was his reason for doing so? If the deputies instructed him to get out of the truck, what was their justification since he was just a passenger?

What transpired such that Gifford attempted to flee the scene?

The area where the incident took place is very remote and unpopulated with very few occupied structures in the area. There were two deputies on the scene. If, as indicted, Gifford “attempted to flee”, what imminent danger did he pose to the public in an area that is largely wide open space and uninhabited such that pursuing him in a vehicle or on foot was not considered as a viable alternative?

“Following a struggle between Gifford and the deputies, shots were fired.” What started the struggle? Did he attempt to run again, and the struggle was an attempt to stop him? Taser puncture sites reported in the autopsy suggest a Taser was used. Gifford weighed 146 pounds according to the autopsy report. If preventing him from fleeing was of such importance, why was he not restrained after being tased?

The shots struck Gifford “in the back”. Can this be taken to mean that Gifford was continuing to try to flee the scene, including running away from officers when he was fatally shot?

Was Gifford armed? None of the press releases mention the presence of a weapon other than the gun(s) fired by one or both of the officers. Admittedly, there may have been a weapon, or the suggestion of a weapon present, but, if so, why would that information not be made available to the public?

And if Gifford was not armed and the deputies had no cause to suspect that he was, what was their justification for drawing their weapons in the first place? Where, in the information that has been released to the public so far, is there a suggestion that Gifford presented some kind of threat to anyone on the scene?

And if Gifford did not present an imminent threat to anyone on the scene, what was the justification for use of deadly force resulting in him being fatally shot three times in the back?

These are the questions plaguing those interested in learning what transpired on that afternoon between Undersheriff Weisenhorn, Deputy Stump and Zachary Gifford. With the district attorney’s office now in receipt of the completed investigative file, it seems that a large step toward learning the truth may be on the horizon.