FIRE: THE FOUR LETTER WORD THAT CAN SPELL CATASTROPHE

Written by Priscilla Waggoner on 24 June 2020. Posted in News 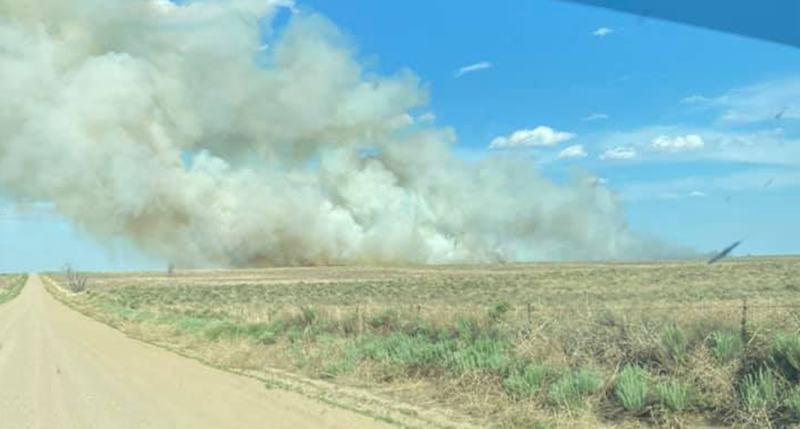 Throughout the day last Monday, every weather service covering southeastern Colorado was issuing the same warning of an elevated fire risk, punctuated with references to the worsening drought situation and the lack of rain forecasted on the horizon. But, frankly, those warnings were far from breaking news to people in Kiowa County, for the evidence was literally all around them.

The humidity hovered at 10% to 12%. Temperatures were in the mid-80s. Hot, scorching winds blew from the south-southeast at a sustained speed of around 25 miles per hour with occasional gusts to 30 miles per hour or more. And what vegetation that remained seemed to grow dryer and browner by the hour.

Suffice it to say that, even though the thoughts themselves may have not been expressed, most people knew that any mistake—a cigarette thrown out the window or a spark from a welding gun while working on a fence—could ignite a serious problem.

Unfortunately, that’s precisely what happened when, last Monday afternoon, sparks from a downed power pole near County Road T and Country Road 46 in north central Kiowa County landed on dry grass where it took hold, turned to flame and immediately started heading north. And with plenty of fuel up ahead and plenty of wind behind, that flame became a fire that was out of control in a frighteningly short period of time.

Their worst fears were confirmed when they saw the smoke rising off the horizon to the north, for those who have spent any time in Kiowa County know that up north is where a lot of ranchers graze their cattle. And fire is bad anywhere but fire on ranchland spells disaster and potential heartbreak at a number of levels and in a number of ways.

However, a well-quoted law of nature—conceived thanks to ol’ Isaac Newton, himself—states that for every action, there is an equal and opposite reaction, and that law was proven true last Monday. As the fire picked up speed and strength and threatened terrible destruction, what can only be described as a sheer force of community strength and determination showed up to meet it head on.

Even with that show of force, things were not looking good. There were structures—homes, an old family homestead, barns, calving barns and other outbuildings—that seemed destined to be consumed by the flames. Worse yet, there were the livestock—horses and countless head of cattle caught right in the fire’s path, prompting men to run ahead and cut fences so they wouldn’t be trapped as the fire grew closer. Despite their best efforts, the relentless wind and fuel to burn refused to be contained.

And then, a group of three farmers jumped into help. According to Sheriff Casey Sheridan, who was assisting on the scene, “It was the farmers with the big plows whose quick thinking stopped the fire from getting completely out of control and damaging a lot more acres of grass and cropland.”

As he describes it, the farmers went ahead of the fire—deliberately placing themselves on the Legg Homestead and directly in the path of the flames—and plowed up huge, deep swaths of grass, creating a fire break that put out the fire as soon as it reached them as it had no fuel to burn when it hit the sand.

By the time the flames were extinguished, 1,201 acres of land had been burned. Thankfully, no livestock or structures were lost.

Later, Sheridan flew over the burn scar to get an aerial view of the damage. He reports that it “burned through sand hills, jumped two county roads and did extensive damage to grass and fences”. He then went on to add that the burn scar “went over 5 landlords” and “was anywhere from 300 to 400 yards wide throughout the event”.

The loss of 1200 acres of land is estimated at roughly $180,000, which is far from insignificant in a cattle market that’s already struggling to stay alive. But, sadly, the impact for ranchers losing 1200 acres of grazing land in a drought is much more severe. There’s not just the loss of the grass to be accounted for; there’s also the question of where to graze cattle in an area where grass is scarce and getting scarcer, and the price of hay is going up on almost a daily basis. And options that have provided an out in hard times before have dried up. Taking cattle to market is not viable as prices are too low and there’s a shortage of buyers. Putting the cattle on a feed lot isn’t an alternative; the cost is exorbitant and space is limited, at best. Even taking cattle to be processed isn’t possible. Processing plants are booked through the fall and, in some cases, into next year.

“Doors are closing on us right and left,” commented one rancher recently, who did not want to be quoted for this story. That comment was then quickly followed by an iconic nod, a kick of his boot that sent a pebble skidding across the street, a sigh and a slight smile. “But it’s not our first rodeo,” he said. “We come through hard times before, and I expect we’ll come through these times, too. Just gotta keep movin’ forward.”

And thus is born another law of nature on the High Plains. Just keep moving forward, no matter what obstacle gets in the way.