Written by Priscilla Waggoner on 15 July 2020. Posted in News 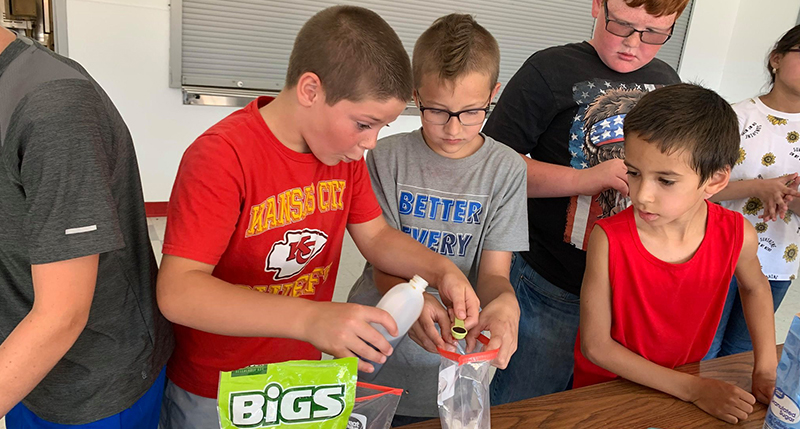 Last week, first via Twitter and then in a White House event on “Safely Reopening Schools”, President Trump stated his administration hopes most schools will reopen in the fall, further stating that state and local officials will be pressured to make that happen. The federal government does not have much control over that decision, as it’s left up to each state’s discretion; however, the president threatened to cut federal funding if schools did not reopen.

Federal funding of primary and secondary education makes up roughly 8% of a school’s budget with funds tied to participation in certain programs, such as Title I.

Of the numerous, significant challenges that have surfaced in the four months since the beginning of the pandemic, education of students emerged as one of the top areas of concern, for the nation, as a whole, was unprepared for the extent of disruption in daily instruction caused by the lockdown that was required to control the spread of the virus.

Almost overnight, teachers were required to develop curricula that could be delivered online while simultaneously trying to continue to motivate and connect with their students from a distance, an experience that many teachers have described as frustrating and discouraging. In some cases, students who did not have access to WiFi or computers in their homes found themselves, at least temporarily, shut out of receiving instruction. Even in cases where WiFi and computers were available, some students did not have the motivation or supervision to check in for their online classes. Students who relied on school for the only hot meal they would have in a day—or sometimes the only meal(s) they would have, at all—went hungry until schools pulled together programs that continued to provide students with meals. Students who relied on their strong relationships with teachers, coaches, counsellors and other students were often isolated and cut off from contact. Parents who were essential workers were in sudden need of child care without the adequate resources or access to good child care centers. Parents, required to work from home, suddenly had to cope with dual responsibilities of working while also supervising their children—including helping them with their online assignments. And, horrific as it is to imagine, there were significant concerns about the sharp drop in reports of child abuse as teachers and schools are often the ones who spot and report children experiencing abuse at home.

Meanwhile, the clock was ticking.

School aged years are the time when education is the most critical. Medical, psychological and educational experts warn of the serious consequences to a child’s social, psychological and developmental well-being when there is a prolonged absence from the stimulation and stability schools provide. That risk is even more pronounced in younger children where failure to master certain foundational skills by a certain age can impact a child for the rest of his school years.

There is no one who contests those concerns. No one. In fact, one of the very few areas of consensus across the board and in both houses of Congress is the definite need for children to return to the classroom.

At the same time, calling for the reopening of schools in the U.S. with 13,500 school districts attended by 57 million K-12 students in the midst of a pandemic of a still somewhat unknown virus that, to date, has infected 3.4 million people and caused the death of more than 135,000 people is far, far from a slam dunk. Concerns about the risks cannot be summarily dismissed out of hand.

Covid-19 is potentially more fatal in people who are older or who have underlying conditions. That’s a significant consideration in a profession where, according to the National Education Association, between one fifth and one quarter of teachers are over the age of 55.

It’s also estimated that around 40% of people who are infected with the virus are asymptomatic—meaning they have no symptoms--but continue to be contagious. Obviously, not everyone who becomes infected dies from the virus, but it has the potential to make people in their 20s, 30s and 40s seriously ill, sometimes with long term effects. With people shedding the virus without knowing it, staff besides teachers—coaches, teachers’ aides, administrative staff, librarians, cafeteria staff, janitors and others—are also at risk in reopening schools. And, with increased contact, it’s possible that students, themselves, may become infected and, while asymptomatic, bring the virus home to parents and grandparents who fall in the more vulnerable category.

All of these considerations lead to the two questions school districts are grappling with across the county: when is the safest time to do have students return to the classroom, and what is the best way to make it happen.

During the course of the pandemic, the administration has employed the practice of foregoing a national strategy to combat the virus, largely leaving it up to the states to develop their own plans. The effectiveness of that plan is a matter for both history and public opinion to decide, but—at least, right now—it’s resulted in a measure of confusion. Most notably, the CDC issued guidelines for schools to follow; however, the administration has criticized the guidelines as being “very tough and expensive” and “impractical to follow”, criticism the CDC says is unwarranted.

Consequently, with less than a month before many schools are scheduled to reopen, school districts are looking to guidance from their respective state’s Department of Education. But, for some school administrators in rural settings, that might actually be viewed as a good thing.

The Colorado Department of Education has provided an online “toolkit” for school districts to use in developing their plans, with the built-in caveat that the plan is designed to be both flexible and fluid as more information is known and the process continues to develop.

Sentiments expressed by some local school officials suggest they prefer the flexibility in a state where the prevalence of the virus varies greatly, depending upon location. While basic protocols—handwashing, disinfecting, social distancing and others—may be the same from district to district, the needs and resources of Jefferson County schools with 85,000 students and 3,000 positive cases to implement those protocols are different from Kiowa County with two schools (and two school districts), a total enrollment of roughly 250 students and no positive cases.

Local school officials in the area—including those from Eads, Plainview, Kit Carson, McClave, Wiley and Cheyenne Wells—are in agreement that focusing on the “least restrictive procedures as possible”. Deep and frequent cleaning will be practiced; hand sanitizers will be accessible; social distancing is feasible, given the small size of classes. However, staggering class schedules is neither feasible nor necessary—again, given the small size of classes. Many are planning to take staff and students’ temperatures daily as they enter the building and are developing contingency plans for students and/or staff who become sick. The goal is “face to face”, in person education with online instruction blended in, if necessary. In terms of staff who may be reluctant to return to the classroom, those situations will be dealt with on a case by case basis with existing school policy and procedure directing decisions to be made.

And, at this point, no school is going to require students to wear masks unless mandated to do so.

In addition to commonalities in procedures, all the superintendents interviewed reflected roughly the same sentiment: decisions are best made at a local level instead of a prescriptive, one size fits all plan.

Merlin Holmes, Superintendent of McClave School District, stated in a July 8 letter to the McClave School Community, “As we have seen from the start of the COVID pandemic, situations can change quickly, and these plans can be modified.” He further goes on to state, “I have advocated to both the Colorado Department of Education and the Colorado High School Activities Association…they should refrain from making statewide edicts that might not fit our community or our local COVID situation.”

The superintendent of the school district in Wiley expressed a similar position in an open letter sent to Governor Polis, Prowers County Commissioners, Prowers County Public Health and the community, saying, “…we should know the risk, inform our patrons and make the best and most reasonable decisions for our school.”

The other equally strong sentiment can be summarized in, essentially, four words. Get back to normal.

As Glenn Smith, superintendent of Eads School District, recently said, “We will follow the rules that keep our staff and students safe----but we will plan diligently to reopen to as normal as we can.” Randy Holmen of Cheyenne Wells, echoed similar feelings, “These kids are in danger of being mentally, physically, psychologically damaged. They need to be with their friends, their teachers, their coaches and others.”

As far as how the teachers feel about getting back to school, Mary Vasquez, a veteran English teacher in her 18th year at Eads High School who also teaches College Introduction to Literature and College Speech classes to AP students, is far from ambivalent or reluctant. “This may sound strange to some people, but I have never looked forward to going back to school more in my life,” she says. “I have missed my kids so much; it's a hole that nothing else fills, except them. I guess that's why I became a teacher in the first place! I am also eager to get back to business with my kids.” She goes on to add, “We did create a bandaid last spring, for which I am thankful. I am so glad we did not just end school or do work with no consequences. However, I know this was not the instruction my kids needed or deserve; it was simply the best we could do in a no-win situation.” When asked if she has any concerns about possible health consequences, Vasquez says, “I think that teachers and students alike need to get back to school FOR our health, our mental health. We thrive on those connections we make with others.”

How well these plans will work, once implemented, is difficult to say, given the range of what could happen. At this point, with no county in this region having more than 20-25 cases and the others having 5 or less with one county having no positive cases, the future is difficult to predict. In the meantime, flexible and fluid are the words for the day with the highest hopes that more restrictive measures won’t be required. As far as what else can be said…

Only time will tell.