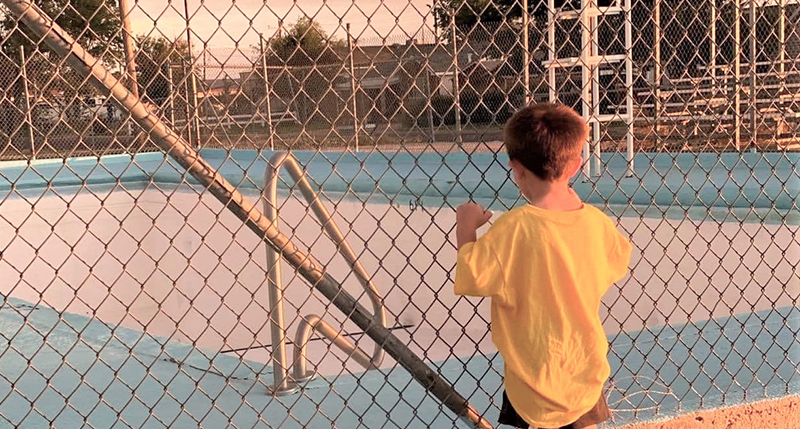 Last month in the June 15, 2020 edition of the Independent we reported that the Town of Eads was still on board and developing plans to try to finance the building of a new swimming pool after the 60-year-old pool, built in 1959, had to be closed this summer due to dangerous conditions with the structure and filtering systems.

At the time of the report, Councilman Justin McLoud stated, “The cost of the complex is estimated to run around $3 - $3.5 million.” In addition, McLoud explained there was yet another issue with trying to find funding for such an expensive endeavor, “After spending significant hours researching grant opportunities, we’ve been informed that the top 5 funders for projects of this type—such as DOLA and larger foundations—have set COVID relief projects as a priority and are not currently focused on municipal pools.”

The Town has been working with CRP Architects, particularly Chris Mannino, Principal Architect, out of Colorado Springs who has developed preliminary architectural plans and a budget for the project. GMS, Inc., with Dannah Konigher leading the research, has also been collaborating with the Town helping them to develop a plan for the funding of the project. This collaboration has netted some solid preliminary plans and has helped the Town decide how to approach the big price tag ahead.

The fact that COVID is in the way of Eads building a new municipal pool for the children of the community is not lost on the city council. They realize if the community wants a new pool it is time to put their money where their mouth is, per se. They voted last week at the regularly scheduled meeting to take the question of funding to the voters of the community in the form of a ballot question requesting a sales tax increase.

Konigher has also been in contact with the Great Outdoors Colorado (GOCO) funding group who has informed her that the current round of funding is for bike paths, trails and parks. However, for the Community Impact Grant in the 2021 cycle, they are very interested in the Town of Eads’ application for that round of projects. They believe the fund award could by upwards of $350,000-$500,000. McLoud explained, “If the voters pass a sales tax increase in the November election, that kind of support will be a huge positive deciding factor whether GOCO will go with the project for 2021.” Those funds come out in October of 2021 and the sales tax increase would more than likely kick in at the beginning 2022.

“If all works out as planned with the sales tax increase first having to pass in November, the pool could be ready to open for the summer of 2022,” stated McLoud.

In the meantime, McLoud says the Town is now in the process of coming up with the wording on the ballot. There are a couple of upcoming deadlines to meet in order to have the question included and there’s still a number of decisions to be made before then.

The main decision, obviously, is the amount of increase in the city sales tax. Currently, the State of Colorado holds a 2.9% sales tax rate and the Town of Eads has a 2.0% sales tax rate for a total rate of 4.9% sales tax when making purchases in Eads. Incidentally, that rate has never changed since it was implemented.

In comparison, Lamar, the town where virtually everyone shops, at least occasionally, features a 7.9% overall sales tax which equates to the City of Lamar having a 5.0% sales tax rate. It would stand to reason the citizens of Eads would not feel too much of a financial pinch given that consideration.

Of course, there are other questions that will come up before the final sales tax question goes on the ballot. McLoud indicates they still have a lot of discussion to do in order to have a complete plan. For sure, one thing that will have to happen is a community meeting. “That meeting is in the works, probably in early August,” stated McLoud, “We hope to have a lot of people attend to give us input on the pool and the ballot measure.”

Cover: Lincoln Sierra looks longingly at the empty pool after one of his tee ball game this summer. His mother Jessica Sierra says, "Lincoln, well all the kids, are so sad they can't go to the pool this year." She goes on to say, "These kids HAVE to learn how to swim. It's so important." And, of course, Sierra is correct with nearly everyone in agreement. The Town of Eads may now have a solution to this dilemma. Photo: Jessica Sierra