IN CELEBRATION OF MIKE JOHNSON

Written by Priscilla Waggoner on 30 July 2020. Posted in News 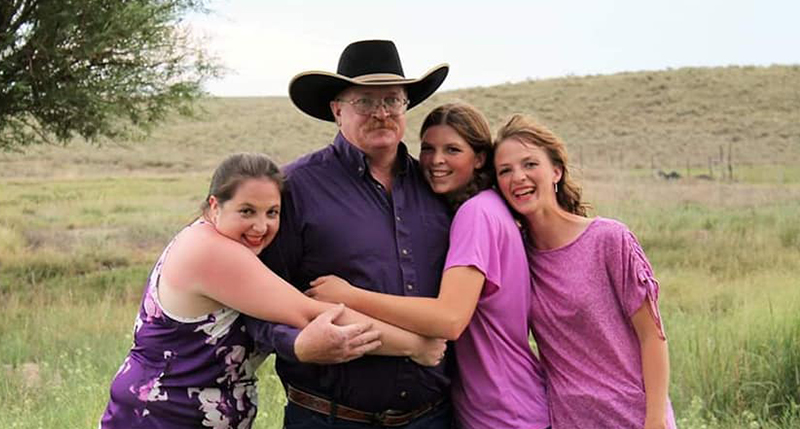 On a warm Tuesday morning beneath a pale blue summer sky, a line of men on horseback slowly rode into the arena at the Kiowa County Fairgrounds where they lined up along the fence, dismounted, stood by their horses and removed their cowboy hats in the ultimate sign of respect for the man whose passing had assembled such a large gathering of people.

Mike Johnson, beloved husband to Martha; father to Courtney, Reagen and Morgyn; friend; cowboy and community member passed away unexpectedly at the ranch where he worked and lived with his family in Eads, Colorado. He was 44 years old. 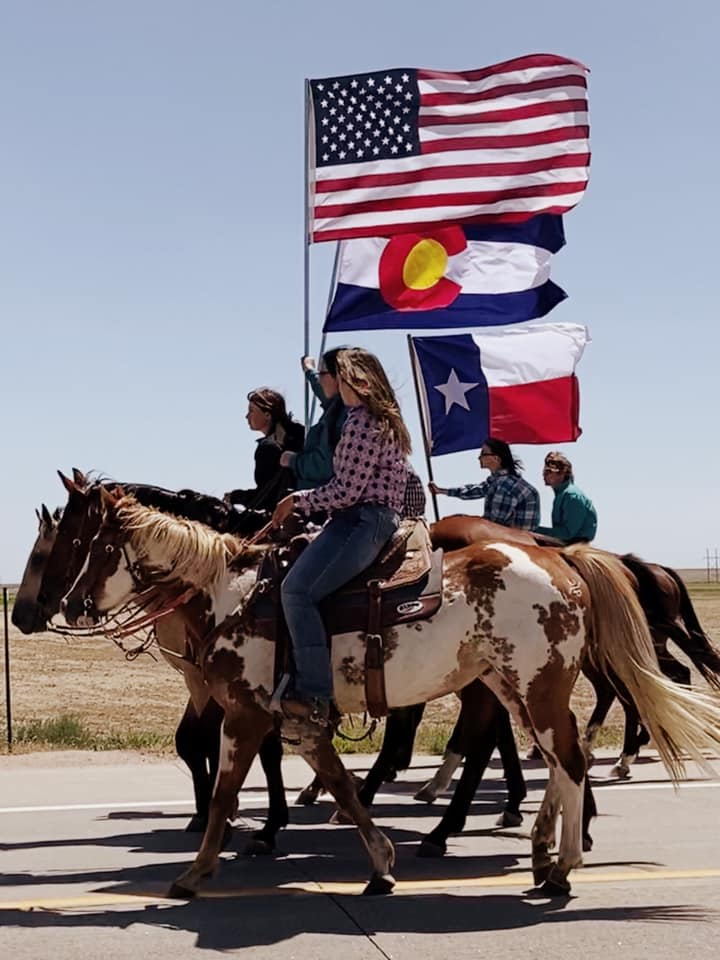 Within moments of the cowboys dismounting, those who were watching from the grandstands rose, as a group, for the procession that was slowly making its way down the track.

At the lead were Courtney, Reagen and Morgyn on horseback and carrying flags—the flag of the United States, the lone star flag of Texas and the flag of Colorado, in that order. They were followed by a handsome pair of mules pulling a wagon that carried in its bed the simple pine coffin. Behind the wagon, Tearle Lessenden ponied a riderless horse in the long time tradition of honoring a special man who has passed. Last, a horse drawn buggy carried Martha, the love of Mike’s life, as well as his parents, Loyd and Lucy Johnson, and Martha’s mother, Debra Ford.

Whatever it was, the quiet, natural, timeless and simple beauty of the ceremony honored in a very special way the man who both honored and loved the lifestyle he and his family lived and devoted themselves to keep it going. Martha, who knew Mike better than anyone, was the one who actually put it into words. “Mike loved all kids,” she said, “but was always extra supportive of kids that were horseback. He didn’t want to see his lifestyle die.”

The ceremony was described as a celebration of life and everything said about Mike Johnson—both before and after the service—confirmed that his was a life well lived, for one word kept being repeated over and over and over.

As Martha said of the greatest gift a man can give to his wife and children, “His family meant the world to him. He loved me and his girls more than anything.” Preacher Mark said that “Mike loved people and people loved Mike”. Jamie Crockett said that “Mike was all about love, support and friendship.” But it’s also an extraordinary testimony of a man when his life is described in terms that suggest he didn’t just speak of love but acted out of love for others in a myriad of different ways.

One of the most extraordinary, well known and most loved memories of Mike speaks of the day when his daughters, Reagen and Morgyn, were on the bus headed to Denver to the state track meet in May. As the video shows, the girls’ bus is moving down Highway 287 when out the window, a man is seen riding a horse at full gallop along the fence line, carrying the purple Eads flag. The video is filled with a chorus of girls’ voices, filled with joy and surprise. And it was, of course, Reagen and Morgyn’s father riding a buckskin named Sandy that Morgyn had broken, no doubt with her father’s help. That was a moment that few who saw it will ever forget, and that his daughters and wife will undoubtedly treasure for as long as they live.

And then there were the other memories…dancing the last dance of the night with his daughter, Morgyn. Buying turtles for turtles to race. Taking kids fishing. Making them laugh with pranks and practical jokes and silly stories that became long running jokes. And, of course, teaching his daughters to ride.

There were the things he did for his friends. Dropping whatever he was doing to help them out when needed. Teaching about the best way to breed cattle. Bringing smiles, laughs and hugs into their lives, all of which will be so desperately missed.

The words used by Jamie Crockett speak of the way Mike will be remembered. Strength. Wisdom. Kindness. Friendship. That kind of smile that says he’s “up to no good”.

And the comparisons used by Preacher Mark Imel when he spoke of men in the Bible who were so similar to Mike.

Barnabas, son of encourager, who was always there to help people adjust, to move on and to be their best selves.

As Mark said over and over, the world needs more men like Mike Johnson. Yes. Yes, indeed.

Everyone, at some time or another, thinks of their lives in terms of their legacy and what they will leave behind. As the celebration of the life of Mike Johnson showed last week, his legacy will be found in countless ways on countless days for the life he lived is one we should all aspire to.

In honor and tribute to that legacy…

Happy trails, Mike Johnson. And may that trail be wide and straight and full of glory.