BORN TO RIDE: THE DEEPEST LOVE A GIRL CAN HAVE

Written by Priscilla Waggoner on 10 September 2020. Posted in News 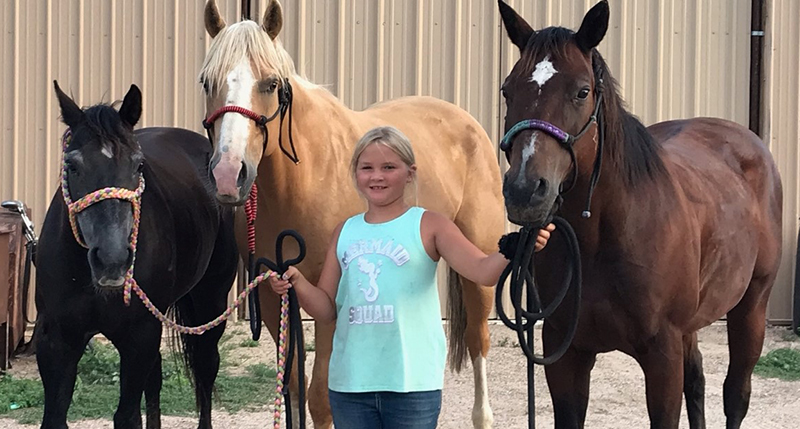 Almost since the time she was born, Braya Ferris has had an affinity for horses. Maybe it started when, as a baby no more than a few months old, she was carried in the arms of an adult on horseback. Or maybe it was when, barely old enough to walk but old enough to hold on, she sat on a horse and the horse was slowly led around the corral. Maybe it resides in the memories of her family when she was a toddler, fearless even after a horse shook and she fell to the ground but, within seconds, wanted back on the horses back. Or the sight of her stroking the legs of a horse with her tiny hands and trying to climb up on his back, all by herself. And, of course, the horse, sensing her fragility, just stood there, not moving an inch while the little girl made her way around his legs and under his belly because, well, that’s just how some horses are. And of course, the little girl, all full of trust and love, fell even more in love with horses each and every day because, well, that’s just how some little girls are made.

Braya’s connection to horses is something the women in her life—her mother, Tabatha, and her grandmother, Robin—have seen and celebrated through the years. As Tabatha puts it, “When she was six months old, all she played with were little plastic horses. She’s never owned a baby doll in her life. The only reason she owns Barbies is because they can ride horses.” Robin adds with a warm laugh, “If it’s a TV show, she’s watched it. If it’s a book, she’s read it. I think she’s read every book about horses that she can find.”

There are undoubtedly those people who would say that a little girl barely old enough to tie her own shoes isn’t capable of a deep and abiding passion for something in life. But Tabatha and Robin knew such was not the case with Braya, and so did Cody Fox, Braya’s grandfather, when he joined the family.

Cody’s an accomplished cowboy in his own right, both working on a ranch and as a professional cowboy in the arena where he rides bucking broncs. Whether his arrival in Braya’s life was fate or fortune or the sheer grace of God, Cody immediately saw what resided in Braya’s heart and recognized it for the gift it was.

“Braya’s just…” he begins in his slow, careful way of speaking. “She’s just an animal type person. Animals are attracted to her. There’s this old tom cat that hangs around here. The rest of us can’t even get near him. He’ll hiss and scratch and bite. But Braya, she can just pick up that old cat and pet him and carry him around with no problem. It’s the same thing with her and her 4H goats and pigs and calves. Those animals pick up on that. They pick up on who she is and they’re drawn to her. It’s somethin’ to see.”

Before Cody started working with her, Braya had been “riding a little bit here and there”. As he puts it, “She knew horses and knew a little bit about riding but hadn’t rode very much.” That all changed once they started spending time together, and the little five year old girl really fell into her own.

One memory especially stands out for Cody. “It was in that first year, and we’d started going to different things,” he says. “We were at Fun Day. She was doin’ the poles and was ridin’ really fast. And I was thinkin’…oh…slow down, slow down. You’re goin’ too fast. But she just kept on ridin’ and…” He pauses just long enough for a chuckle that’s half pride, half admiration. “She made the perfect run. Perfect run.”

Since then, Cody’s continued to work with her. “It’s kinda hard to explain what we do,” he says. “I help her to…oh, just…handle her horse a little better. I kinda watch her and see what she needs to improve on. Maybe help her to sit in the saddle a little better. And general care of the horse. How to saddle and unsaddle and how to feed and all the maintenance that goes along with it.” But when asked how he feels watching her, there’s an audible change in Cody’s voice. “Oh, it makes me very proud to watch her ride,” he says. “She’s such a natural at so much of it. I don’t really have to critique her very much. Just little things here and there. But she picks up a lot all on her own.”

She’s also much more comfortable talking about her horses than she is herself. When asked, she’ll offer in a voice barely louder than a whisper that riding makes her happy and she likes to barrel race in rodeos best of all. But ask her about her horses, and there’s no hesitation. “Bailey can be ornery,” she says, laughing. “And stubborn,” adding that Bailey recently bucked her off . “If I tell her to give me a kiss, she will. And she likes blackberries, watermelon, peppermint treats, apple treats and ice. Every day, I brush her and clean her feet. She gets adjusted by the chiropractor sometimes. And I have to give her medicine now because she has a stuffy nose.”

She then goes on to describe a day when she cooled off by sitting in the water tank, and Bailey decided it was time to play. “She was splashing the water all over and stuff,” she says, “and then she gave me a kiss.” Braya giggles as she says this, and the joy in her voice can’t be missed.

A few weeks ago, Braya competed for the first time in the Kiowa Horse Club cattle sorting competition at the fairgrounds. Tabatha describes the experience in the language of a mother. “She’s nervous and quiet and shy and doesn’t like to do a lot of things with other people,” she says, “and she’d never done something like that before, especially in front of a whole lot of people. But once she entered and tried it, she wanted to enter again and again. And let me tell you what,” she continues. “When she wins money, all of it goes right back into her horses. She doesn’t go and buy toys. She buys feed or tack or clothing attire for when she competes. She puts all of it right back into her horses.” Tabatha stops for a moment and then says, “She can be having the worst day at school or wherever, but she climbs on a horse and it’s nothing but smiles. You can see the happiness in her face. It’s like she was born in this world to be on a horse. That’s what she was put in this world to do.”

“Horses are her best friends,” Robin adds with more than a touch of wistfulness. “They can just see her, and they’ll all come running and follow her all around. Moca was the first horse she rode, and when Braya started riding Bailey, Moca would try to push Bailey out of the way or try to bite her because she was jealous. And now Bailey does that to Cool Beans when Braya’s working with him. Those horses are her best friends in the world.”

But Braya knows, first-hand, loving a horse can lead to heartbreak.

Two years ago, Cody had bought Braya a horse named Tomato. Last year, Tomato suddenly passed away in the night, perhaps, Cody thought, from a heart attack. “That devastated her,” Robin says. “It really did. We thought for a while we weren’t going to get her back on a horse again. She eventually got through it, but it was hard on her. Really hard.”

As for now, things are about to get interesting and educational. Cody’s going to teach Braya to train Breezy, a grullo filly who turns two this month. “We’ll start [Breezy] after fair,” Cody says. “Braya’s already worked with her some. She can ride her with a lead and things like that. But, yea, now she’s going to learn to train a horse.”

When asked that typical question adults always ask kids—what do you want to do when you grow up—Braya’s shyness returns. “I don’t know,” she says softly. “I want to do something with horses. That’s for sure. Maybe I’d like to ride on TV…? I don’t know.”

Cody’s answer is more confident and reflects the man who’s both cowboy and grandfather. “I think she can do anything she sets her mind to do. I’m sure it’ll have something to do with animals. Like I said, she’s just a natural.”