IN GOOD TIMES. IN BAD TIMES. NO MATTER THE TIMES, KEEP GOING.

Written by Priscilla Waggoner on 10 September 2020. Posted in News 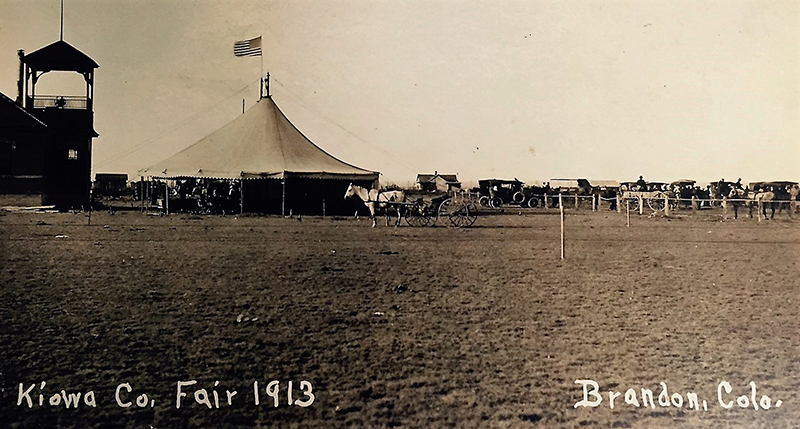 Living on the High Plains is unlike anywhere else. Clear skies during the day. Countless stars overhead at night. Horizons that stretch forever, uninterrupted by the tall buildings that set a limit on how far the eye can see. No traffic jams and few, if any, traffic lights. It’s a part of the country where the sound of a car horn is not just unexpected but downright unnatural. And it offers a slower pace of life where it’s common practice for people to say hello to one another in passing, sometimes even taking the time to stop and ask how the day is going and then actually listening to the answer.

All of those things are present on any given day, and they are, indeed, to be celebrated. And what’s equally true is that, sometimes, things can get tough.

There was the Spanish flu in 1917-1918 that was so highly contagious, so terribly fatal that students had to stand on the roof of the school in Wiley to watch the funerals at the cemetery nearby. The 1920s where farmers and ranchers still struggled, even as the rest of the country prospered. The dirty thirties when giant dust storms bore down from the north like relentless giants bent on destruction. The forties when the world was at war, for the second time in less than 25 years. The fifties that were harder on the land and the people who worked it than the thirties had been. The sixties and seventies when the nation was—again—at war. The eighties that choked the farmer and the cattleman with interest rates that were unprecedented with an impact that still lingers today. Not long after the dawn of a new millennium, another drought that just wouldn’t abate as it tested the resolve of even the toughest men and women. And now the year 2020, where Americans of opposing political persuasions are literally at each other’s throats like no other time since the Civil War; a pandemic has caused the death of almost 200,000 Americans and left more than 11 million people without a job in an economy that may be reaping abundant rewards on Wall Street but is slowly squelching hopes and dreams of “Main Street” businesses throughout the country. Yup. It’s been a hell of a century topped off with a hell of a year.

So, why this gloomy (if not worse) trip down Memory Lane as we are reminded of those times we would rather simply forget?

The answer to that question is, perhaps, as clear as the collective noses on our collective faces. It’s in the hardest times that we find our greatest strength. Winston Churchill actually said it best. “When you’re going through hell, keep going.”

And, perhaps, that’s what the Kiowa County Fair and Rodeo is all about.

Despite all sorts of reasons to just call it off, the Kiowa County Fair and Rodeo is still going to happen. . The cowboys and cowgirls who have registered for events are still going to compete, the crafters and producers and 4Hers will still put the fruits of their labors on display and hundreds of people will still dust off their cowboy hats, brush off their cowboy boots, pay for their bracelets and head to the fairgrounds for a tradition that’s been going on –uninterrupted—for more than a hundred years. The people of Kiowa County—like people all across the country—may indeed be going through hell, but they sure as hell are going to keep going. Just as they’ve done for the last 100 years.

And if that ain’t the best kind of tradition that’s worth continuing, I challenge someone—anyone—to tell me what is.

It’s been said that “a nation’s culture resides in the hearts and the soul of its people”. There is no doubt the same thing can be said about the genesis of the culture of small towns. And nowhere is that culture that springs from the heart and soul of the people more apparent than during a county fair and rodeo.

Anyone who’s been to a fair and rodeo can call up the images. The lights shining down on the arena on a Friday night, the glow visible on the horizon even in town. The sound of the announcer’s voice coming over the PA and drifting through the air, the accent and cadence familiar year after year. The heavy clang of metal on metal as gates are pulled open, as thundering hooves land on dirt that’s already packed down and the distant roar rises from the crowd.

This annual event is a Western tradition that is truly an extension of the people who bring it to life year after year. These are people who value hard work, in others as well as themselves. They judge a man (or woman) not by the money that’s made or the fancy clothes that are worn or the big house that’s been purchased but by the effort that’s put into their labor and the pride they take in a job well done.

For the most part, these are men and women who are accustomed to being their own boss and working alone, and, in their most honest moments, they’ll admit to the danger in it. It’s one thing to get thrown from a horse when you’re in sight of the barn or have a good signal on your cell phone; it’s a totally different story when you’re all alone with no one to help you but…you.

So, when they get together, as they do every summer, it’s only natural that the events they enjoy are an extension of the rhythm of the work that fills their daily lives. Farmers will exhibit the finest produce they harvested that year. Women will display their most exquisite quilts and needlework. The “kids” will show the lamb or the goat or the pig or the calf or the chickens they’ve devoted months to raising, not allowing themselves to dwell too much on the inevitable sale that will come at the end of the things.

And the cowboys…the cowboys will show just how fast they can rope a cow on their own or—better yet—be part of a team that does that and more.

The fair and rodeo is the one time of year when people who are individuals, above all else, and scorn anyone who dares to boast or brag will, with no small amount of pleasure, join a team and show off their best moves on horseback.

It’s that way today, just like it’s been that way, all along.

The first Kiowa County Fair and Rodeo was held in 1910 (or maybe 1912, no one’s exactly sure). The town itself was less than 25 years old, and the fairgrounds would not be built for another decade or so.

It originally began as a Labor Day Celebration but gradually evolved into a 3-day fair rather than an actual festival. Over time, it was moved to the second week in September, and that’s where it’s been, for the most part, ever since.

During those early years, all events were held downtown. Space was limited—there weren’t that many buildings built yet—so exhibits were somewhat “meager” and jammed into any space available such as store buildings, the school house, tents—if tents were around. Maine Street was the location of all the concessions and was also the site for the race track. In those early days, foot races, sack races and barrel races were the main competitions as well as any other event that would gather enough people to participate and interest enough people to watch.

The ball diamond was down in Jackson’s pasture, not far from where Jackson’s Pond is now, and the annual ball game was no small part of the annual celebration.

In 1916, the first “Kiowa County Free Fair and Barbeque” was held, and, until this year, there hasn’t been a single break in it since.

Five years later, the Board of County Commissioners acquired the land that is the site of the fairgrounds now. First off, a few small livestock pens were built. An exhibition building for agriculture products was added as was another building for “fancy work” and household displays. The present race track was laid out in that first year with the baseball diamond being in the middle where the arena is today.

However, the “crowning touch” was the construction of the grandstand, comprised totally of wood and capable of seating 300 people and providing an unobstructed view of both the race track and the baseball diamond. AS the years passed, the crowds grew and events were added. More buildings were built, including the Community Building constructed by the WPA. In the mid-1940s, the metal grandstands were constructed that are still used today.

At some point, it’s unsure when, the ball game was replaced by more rodeo events until the ball game ceased to be part of the fair and rodeo, at all. But, since then other competitions have sprung up and garnered their own enthusiasts.

So, what’s up for this year? The schedule posted on https://kiowacounty.colorado.gov/ on will provide the best (and most up to date) schedule of events,

Yes, there are some events missing from the lineup. Pandemics tend to do that to occasions like this. . But there are plenty of things that are still going on and will provide a brief, albeit much needed, journey into what used to feel normal and everyday. And who couldn’t use a healthy dose of normal right now, even if it’s just for a little while? For there are some traditions that must be maintained, for the traditions themselves are not just a way of life but part of life itself…its celebration and joy and gathering of the people from whom that life springs forth and is enjoyed day after day, year after year in both good times and bad times alike.

And so it is with the Kiowa County Fair and Rodeo. Yeehaw.