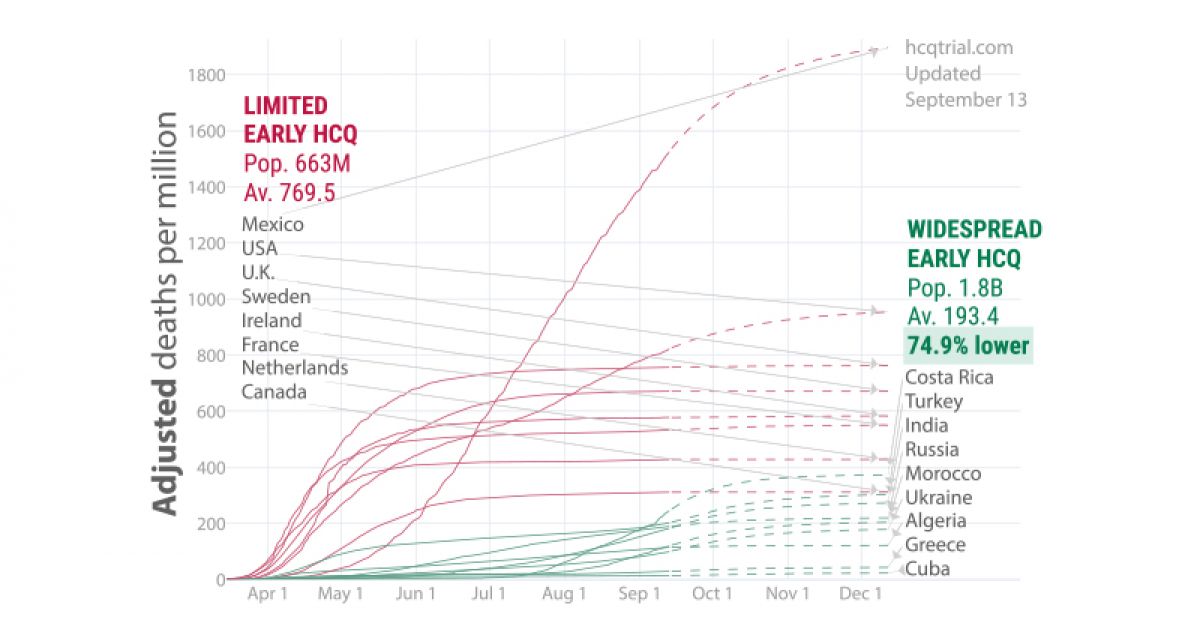 Last week we examined how our hero, Hydroxychloroquine, and its sidekick, azithromycin, had been determined to be unsafe and not effective in the treatment of COVID-19 despite many earlier studies stating the opposite. In this final episode, we find out whether our hero and sidekick can prevail in the end.

Fairly quickly, the three studies, including the one from the Veteran’s Administration, one published in the Lancet, and the third in the New England Journal of Medicine, that combined to put the brakes on HCQ use in the western world were all of a sudden retracted. First, authorities with the VA stated to President Trump in a meeting that the information provided in their data was not meant to be a conclusive study. Further, with the Lancet and New England Journal of Medicine reports, HCQ researchers around the world noticed problems with the huge studies. The data wasn’t making sense in places like Australia and Africa. Over 100 scientists with relevant expertise signed a letter to the Lancet stating the irregularities. They asked the Lancet to have the authors share their raw data. Those authors refused putting up another red flag. It finally turned out that the first author, Dr. Mandeep R. Mehra, of Harvard, had contracted for their data from an organization called Surgisphere, which turned out was a group ran by who happened to be the brother-in-law of one of the other authors of the study, Dr. Amit Patel. Further, Surgisphere had only a few employees, which included a science fiction writer and an adult model. Immediately, both the Lancet and New England Journal of Medicine studies were retracted. Richard Horton, editor of the Lancet called it a “monumental fraud.” The sheer amount of fraud associated with actions of Surgisphere should have disqualified the study in its whole. But it wasn’t. Maybe because it came to the right conclusion which was HCQ was dangerous. Horton, who described Trump’s action in defunding the WHO, “a crime against humanity,” also refused to publish Raoult’s study of 1,061 actual patients that came across his desk in the same week.

However, the main-stream media was mostly silent to the retractions and the understanding that HCQ was dangerous stuck in the belief systems of the American public.

Our hero grabbed another break on July 1 as a large peer-reviewed study of 2,541 patients by the Henry Ford Health Center in Detroit was published in the International Journal of Infectious Diseases. It showed that HCQ lowered mortality in hospitalized COVID-19 patients by over 50%. This was basically what Raoult had been claiming all along. The study, conducted just before the FDA banned HCQ in mid-June, was a large one performed in a hospital system of six hospitals. Again, it was not an RCT, but was superior to the earlier studies that lumped all patients together not distinguishing how sick each patient was. This study considered 19 different risk factors and matched patients in terms of illness severity. It compared 190 patients who received HCQ, to 190 matched patients that did not. HCQ gave a mortality hazard ratio decrease of 51%. Overall, treatment with HCQ decreased the risk of death by 66%. Further 26.4% of COVID-19 patients that did not get the treatment died. Of those who received HCQ, only 13.5% died. Therefore, HCQ cut the death rate in half. This means that of the 926,000 people across the world who have died of COVID, if this rate held up, over 463,000 of them might be alive today if they had received HCQ.

The Henry Ford study also examined HCQ in combination with azithromycin to see if it improved the outcome further. It did. They found that early prescription of HCQ (82% within 24 hours of hospitalization, 91% within 48 hours), the patients had far few cardiac problems than were seen later in the stages of COVID.

But Anthony Fauci was still not impressed telling a House subcommittee on July 31, “That study is a flawed study, and I think anyone who examines it carefully will see that it is not a randomized placebo-controlled trial (RCT).” His point was because it wasn’t an RCT then it wasn’t really legitimate. Another study in Milan which tested HCQ and azithromycin vs controls got a 66% reduction of risk compared to the control group.

So, is our hero and sidekick (azithromycin) dangerous? The best answer is compared to what? Risch quantified the cardiac concerns stating that worldwide the number of deaths was 9 per 100,000. If the drug combo was able to half that number of deaths, as the Ford study suggests, the relative risk of the medications is extremely small, and the potential gain is immeasurable.

The challenges from Risch, the Ford study and other proponents for our hero was answered swiftly with a flurry of RCTs that claimed “strong evidence” against HCQ and the drugs “sad saga” was at an end. The report from an RCT published in the Annals of Internal Medicine concluded, “It is time to move on from hydroxychloroquine.” However, the author of the study never even mentioned the proven effectiveness and safety of our hero. In other RCTs, particularly one from China and published in the British Medical Journal, the medication was given late, on the average 16.6 days after the first symptoms. In addition, that RCT did not utilize our sidekick in its study. And there was an array of other issues with the study, but that didn’t stop the media and others from claiming more than what was proven. In addition, there was language changed, language that had spoken to the benefits of HCQ. Raoult caught this cover up, but his complaint was ignored.

Overall, the claims in the array of RCTs about the ineffectiveness of HCQ and azithromycin is quite weak. Yet, on August 2 Meet the Press, Assistant Secretary for Health, Admiral Brett Giroir who is a member of the White House Coronavirus Task force along with Fauci and Dr. Berks, parroted the findings of Fauci and other political figures saying, “I think we need to move on from that. At this point in time we don’t recommend (HCQ) as a treatment. There’s no evidence to show that it is…Most physicians and prescribers are evidence-based and they are not influenced by whatever is on Twitter or anything else.”

Giroir’s assertion was that the numerous studies in favor of HCQ were the product of Twitter and not serious studies. His statement enraged the clinicians and physicians on the front line as well as the researchers who still stand by their results. He ignores the results of the large studies such as the Ford study and brushes aside the fact that HCQ has been used safely in standard care for decades. They have even ignored the largest RCT that occurred across the world when it was found that the countries who allowed their citizens to use HCQ either as a prophylactic or as early treatment for COVID showed over a 79% lower morbidity rate than the countries such as the United States and other western countries who have allowed politics to get in the way.

Currently the FDA is denying access of HCQ for RCTs and other such studies. On August 13, the large Henry Ford Hospital System, based on their original study and the multiple requests of the drug from their frontline physicians, asked the FDA to let them continue to use HCQ for their patients. The FDA refused.

Further, in early August, a group of frontline doctors traveled to the steps of the Supreme Court in Washington D.C. to explain their position and experiences in successfully using HCQ and azithromycin with their COVID patients. The five hours of video that featured doctors from different areas of the country and in different specialties caught the immediate attention of the American public having over 20 million views on YouTube in less than a day. Even President Trump tweeted out the video. Immediately the videos were taken down and multiple pages were handed strikes for their bad behavior of sharing “fake, misleading and dangerous information.” The doctors themselves had their personal reputations shredded by the main-stream media, and the Frontline Doctors’ own website was taken down by the CDC. There is much outrage to be had at the treatment of these doctors, but the biggest question might be, why such a vicious attack? Why censor not only the doctors but everyone who shared the information? What is so “dangerous” about doctors who had information to share? That response did not match the intention of their actions. Currently, the head doctor associated with the Frontline Doctors who came to Washington D.C., Dr. Simone Gold, has stated she’s going to be filing a federal collateral censorship lawsuit.

And, thus, our hero has not prevailed in the end---at least not yet. In fact, our hero has been put into prison and is being held hostage at this time by the FDA. The reasons behind our hero’s arrest must be understood. What happened to HCQ? It speaks of a larger social context in which science has now produced. It is a landscape influenced by technology and big data abstraction instead of concrete, tangible human experience. It is being marred by academics who see human activities as political power games. The extraordinary power and money of the pharmaceutical companies, who compete for hundreds of billions of dollars cannot tolerate a generic, non-money-making drug like HCQ. Politicians don’t get paid that much, but they sure can rake in a lot of money if the pharmaceutical companies see them as friendly. And, finally, there is the worst problem of all, the loss of good journalists and researchers who used to hold all these players accountable, but no longer do, or really even can.

As the curtain falls on our hero---these debates are far from over. Since August there have been 20 new studies, around the world in areas where HCQ is allowed to be studied, with 16 showing positive results and 4 showing negative results as to whether HCQ is effective in the treatment of COVID-19. None have shown HCQ to be dangerous as was stated in May and into June when it was banned by the FDA.

Generally, for people in our area, if you find you have been deemed to have a case of COVID-19 you are within your rights to request the use of HCQ, azithromycin and zinc if you and your doctor believe it’s the best treatment for your situation given your health status, age, and the stage of the virus. And with that information in hand, our hero will stick around for a while longer, despite its current incarceration, and perhaps there will be more acts to follow as more information becomes available.