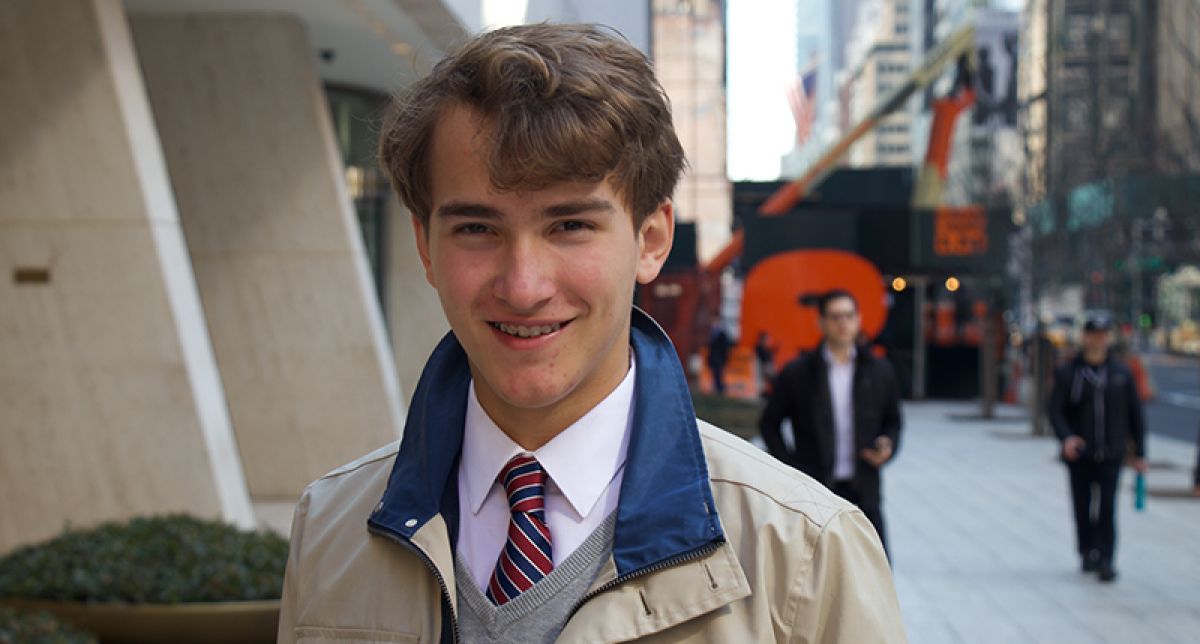 Children born to families who live in rural, agricultural communities grow up quickly. Talk to any farmer or rancher or check out any one of the numerous blogs online, and some version of the same childhood remembrances can be heard. “I was sorting cattle with my dad and grandad when I was five” or “I was plowing soybeans with a 1086 IH and a 4 row rolling cultivator when I was ten.”

Every recalled memory is part of a larger recollection, a more fundamental experience that involves a parent teaching a child as soon as the child showed an interest. That’s what it means to run a family business when that business is in agriculture. Instruction starts when a child is young and interested, and it’s followed by more complex instructions and greater responsibilities as the child grows older.

To some, it may seem inconceivable that the characteristics of a teenager’s life growing up on a farm or ranch on the High Plains of Colorado would have much in common with a teenager growing up in, say, East Hampton, New York. But, as some of the people in Kiowa County who met Hayden Soloviev witnessed last week, there might be more similarities than one would expect.

Stefan Soloviev is a well-known name in southeastern Colorado and western Kansas as he owns both Crossroads Agriculture and the Colorado Pacific Railroad. Yet, the man behind the name is, in many ways, an enigma, for he’s portrayed as everything from a billionaire New York City real estate magnate to a guy wearing a baseball cap and t-shirt hunkered down between a row of crops.

He simply does not fit into any pre-conceived mold. And neither does his son. 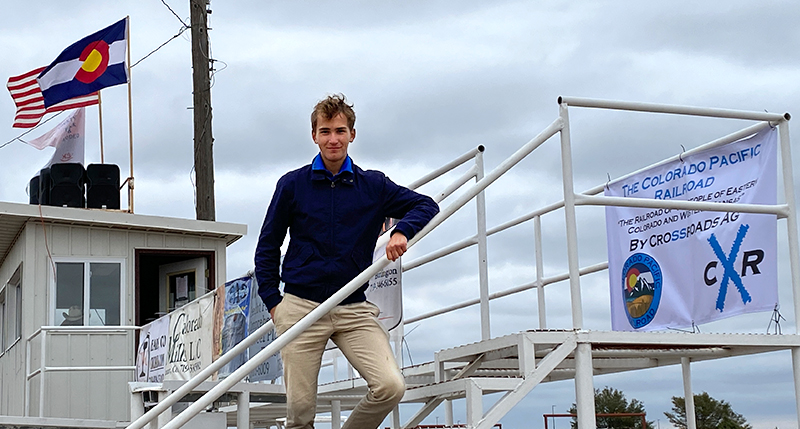 At first glance, Hayden Soloviev appears to be like many 17 year olds his age. He’s energetic, confident and seems to be ready for just about any question that’s asked. He’s very adept at social media. He’s attending East Hampton High School as a senior as he learns all about Crossroads’ western operations. But, while others his age may be into rap, hip hop or rock, his favorite music is classic country western from the fifties, such as the legendary Jim Reeves. And, highly unusual in a teenaged young man, he readily admits how close he is to his parents. He speaks of his mother with great affection, and his description of his father sounds like Stefan is his teacher, mentor, parent and pal. When asked about how he handles having a professional relationship with his father, Hayden says, “My father welcomes criticism from me more than anyone else in the world. He understands that it’s in his best interest.”

When asked about where he is in the birth order of siblings, Hayden drops an unexpected surprise. “I’m the third oldest child and the second oldest son,” he says. After a little prodding, it’s revealed that one of the siblings who is older than him and the one who is younger are different ages not by years, not even by months but by minutes. “I’m an identical twin in a group of quadruplets.” (Yup. Go ahead and read that one again.) As it turns out, the oldest child is a young man named Christian. Eleven months pass, and there’s Kailey. Hayden is next followed by Quintin – who’s an identical twin to Hayden. And Carson brings up the rear. (With a number of siblings after that.)

Despite being raised in New York, Hayden feels a “deep connection to agriculture”, especially agriculture in this region, stemming from memories that go way back to when he was a child, and his father brought him and his brother on trips to Crossroads farmland. Southeastern Colorado and western Kansas seemed to always be a topic of much discussion with his father, and Stefan would spend significant time explaining to Hayden what he was doing. “He kept me in the loop about all his business decisions, even when I was very young,” he says, already using the vernacular of a businessman. “When I didn’t understand what he was saying, he broke it down and explained it again in a simpler way until I got it. Having that background really helps me understand what’s going on here.”

The railroad was a big topic of conversation, and Hayden grew up with a fundamental understanding of what his father was trying to do in saving the Towner Line. “VNS was tearing up the railroad line to salvage it. It was unfair and unjust. It was wrong,” he says. Even though he was only 12 years old at the time, he also understood the significance of winning the battle to bring back the railroad. “March 23, 2016 was a very important day in my family and a great day for families in Western Kansas and Eastern Colorado. Something that was an injustice was made right. It was a big victory in many ways,” he says.

As Hayden began to think about his future, his attention naturally focused on those things that had been a big part of his life, most notably Crossroads Ag and The Colorado Pacific. In late January or early February, he told his father he wanted to handle the public relations for the companies, and his father agreed. Now, Hayden wants to be “a fixture in the community where everyone can go to him if they have questions”.

And he’s taking steps to make that happen, including spending the last week with Jacob Fehr and his family in Eastern Colorado, while meeting with different groups of people as he gets to know the region better and the people get to know him. It’s been an enjoyable experience. “Everybody has been so nice and friendly and respectful. I have become very close with Jacob’s family” he says.

He trekked to Eads to learn more about the projects that he and his father “have on their radar”, starting with a tour of the movie theater with Betsy Barnett. “He looked at the murals on the wall and said how much better it was to have that instead of some modern kind of graphic. He instantly got it, and I thought that was great. A lot of people don’t understand what those murals mean,” she says.

Hayden then met with Justin McLoud who showed him the drawings for the pool. “They are willing to consider a donation to the project if the ballot issue passes. They’re also willing to help out with ‘campaigning’ for us on the issue and will be posting information about our meeting on their Facebook page. It sounds promising if it passes,” McLoud says.

Hayden is starting in seemingly small but very significant ways. “When my father came to Colorado, he came guns blazing, like always. He was completely focused on the business,” he says. “And when he conveys a message, sometimes he’s a little...blunt.” With that in mind, when Hayden got here, he immediately saw things that he thought should be changed. “People call us ‘the New Yorkers’ or the ‘Russians’. That’s even what it says on the grain silos—‘Soloviev New York’ or ‘East Hampton, New York’. We understand why people say that, but we’re very connected to this part of the country, and it should say so on the silos. So, I’ve decided they’re going to be changed. Soon, those silos will say ‘Sheridan Lake’.”

But the message he intends to send goes far beyond what’s painted on the silos. “We’re here to stay, and we’re for the farmers,” he says. Hayden also says, “BNSF Railroad has been very cooperative in getting the interchange at NA Junction, where we put in a 3 million dollar siding to send unit trains out,” which he describes as “a very big deal that potentially provides access to the PNW.” He says they’ve formed a strong partnership with Scoular Grain and are building an elevator and a bunker now. And, of course Soloviev is continuing his effort to acquire the Tennessee Pass railroad line across the top of the Rocky Mountains to enable more direct shipment of grain to the west. That line has had its service discontinued for more than 20 years, and Soloviev is seeking to acquire and restore it.

“We want people to trust us, and, honestly, I would’ve done things more gently than my father,” Hayden says. “The Colorado Pacific Railroad is going to treat the farmers in Western Kansas and Eastern Colorado the right way. It’s the way they should have been treated all along.”

These, plus the professional image of Crossroads Ag and The Colorado Pacific, are all things Hayden wants to communicate via social media and will make himself very accessible to those who have questions about what’s going on. “People can reach me through my personal Facebook and Instagram—just look for Hayden Soloviev. Or they can email me at This email address is being protected from spambots. You need JavaScript enabled to view it.. I’ll try to respond right away,” he says, promising to be accessible, outgoing and dedicated to the community. And it’s only the beginning, as Hayden is now considering majoring in Agriculture at Kansas State University, where upon graduation, he says that Stefan is committed to giving full control of the region to Jacob Fehr and Hayden. When this happens, Stefan says he is committed to stepping down as President of Crossroads Agriculture in Colorado and Kansas, to directly focus on the railroad and his entire New Mexico region.

“If he’s out there full time with an ag degree from K-State, commuting back to the region a couple of times a month to work with Jacob during school year and being there in the summer, well…” Stefan says, “He deserves to run it. I see him driving into this kinda the way I did at first, eating and breathing it. And the faith I have in that boy is limitless. He’s one of a kind.”

When asked how he feels about being in Colorado, a smile comes into Hayden’s voice. “Matt Prince said one thing he loves about it here is that it’s like stepping back into history,” Hayden says. “It’s like going back to a time that was better and more peaceful, where values mattered, and a handshake was worth more than anything. I love that. And I love the openness. It’s so beautiful with the crops growing and the silos and the sunsets. I love it here. It already feels like home, and I hope to live here upon graduating college.”

Hayden grew up beside the Atlantic Ocean, but now he is beginning to love an ocean of a different kind, the proverbial “ocean waves of grain”. Of course, if it ever does rain.