79 YEARS LATER: THE MEMORIES THAT HAUNT: A Survivor of Pearl Harbor Shares What He Remembers

Written by Priscilla Waggoner on 02 December 2020. Posted in News 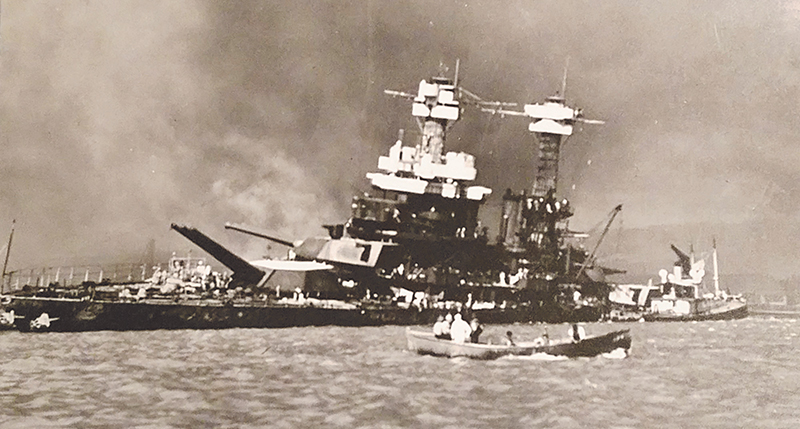 On December 8, 1941, then President Franklin D. Roosevelt addressed the United States Senate and House of Representatives in a speech that was broadcast live “over radio waves” across the nation.  The first clause of the first sentence of that historic speech went on to be one of the most widely recognized lines both then and now, not so much for its eloquence so much as for its simple, straightforward and devastating truth.

Roosevelt was, of course, referencing the aerial attack by the Naval and Air Forces of the Empire of Japan on Pearl Harbor in the Hawaiian Islands.  The purpose of the speech was to request that the United States Congress declare war on Japan.

The attack began at 7:55am Hawaiian time on a Sunday morning when a single dive bomber emerged from the clouds over the naval base on the island of Oahu.  Three hundred and sixty Japanese warplanes were right behind, all bearing the red “rising sun of Japan” on their wings. What ensued was the most devastating attack on American soil by a foreign government in American history.

Suffice it to say, the Japanese caught the United States military completely by surprise as there was no warning of the Japanese intention.  American officials thought an attack was “probable” but nothing had indicated such an attack was imminent.  In fact, the American government was actually in the midst of diplomatic negotiations with Japan at the time the attack took place.  As a result, eight massive battleships were lined up in port at Pearl Harbor in a formation referred to as “Battleship Row”.

Historians have described the eight battleships as “sitting ducks” with the Navy crews on board barely able to defend themselves against the ferocious attack from above.  At the end of the day, 2,600 people lost their lives, most of whom were on the battleships that were attacked.  An additional 1,000 people were wounded.  Never had there been such an attack by a foreign power on American soil, and Pearl Harbor both stunned and horrified the nation.

As “personal” a violation as it might have felt at the time,  most people then, and clearly almost everyone now, could only relate to the attack through newspaper stories, radio broadcasts and grainy film footage.

However, to many sailors who were stationed on those massive battleships in the harbor that day, it is anything but a faded image or distant memory. In fact, a number of those who survived have continued to live with the horror of December 7, 1941 in some form or fashion almost every day of their lives for the past 79 years.

One such man is Orville Mousel, a long time resident of Kiowa County.  After decades of silence about his experiences as a crew member of the USS California, Mr. Mousel began to speak of that day, first to his wife, Rita, and then to a reporter with the Independent a short time after that.

An abbreviated version of Mr. Mousel’s account of that day has appeared in the newspaper before; however, this year, he decided to share a more in-depth telling of what he remembers.  No, he does not remember everything that happened on the nightmarish morning;  the human mind can sometimes be a fiercely self-protective force that simply shuts out what is too painful or horrible to remember.  But he does remember a great deal, and what follows is a written version of those memories, originally written in his own words by his own hand.

It begins in the moments following the attack, much of it written as if it’s still happening and he’s just describing what he’s doing in the moment. 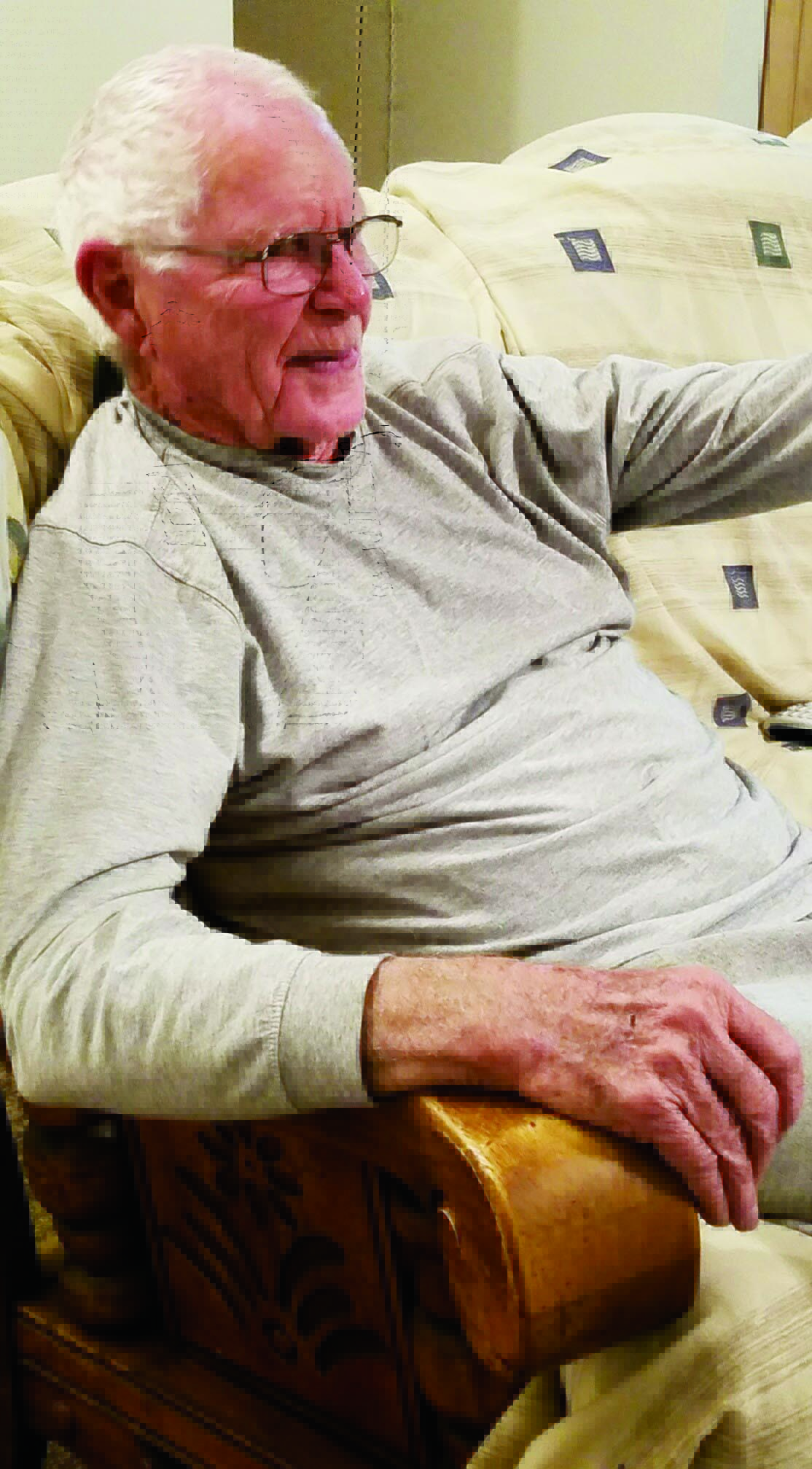 Our 5” broadside gun crew was replacement for 5” 25 anti-aircraft gun crew when killed, so, as orders came to take over that gun station, we ran forward to get it in action.  Location was forward on 5th Division Teak Deck and up one ladder to boat deck directly aft 16-inch main battery turret.  Being last one up the ladder and stepping across the top of the bulkhead, I noticed we had all stepped across a man lying face down at the top of the deck.

Blood spots seeped through his scivy shirt about the size of a nickel, starting at the right side of his waist and extending in close, even patterns to the top of his left shoulder.

After jumping up on the gun platform and getting to my position, I first checked hydraulic system and, seeing no damage, turned to see if second loader had projectile in the tray ready to ram.

No one was there.

The realization then hit me; bugle call had already sounded to abandon ship.  The rest of the crew had gone down port side to quarter deck.  That was the lowest point to abandon ship, and looking aft the bottom of the Oklahoma was visible. So, my first thought was how to get off deck without being trapped if she rolled to port -- the direction she was already heeling.

The decision was made.  Go to starboard and be able to jump far enough to miss the torpedo blister and hull bottom -- if the repair crew could get the ship stabilized enough to sink straight down. which they finally accomplished.

As I was going down the ladder to teak topside deck, I saw the bomb hit had broken the latch on the life jacket hatch, and they were scattered about at the bottom of the ladder.

My next observation was a man coming up the hatch-way to my left from the deck below.  It seemed impossible he could be alive yet able to move.  His arms were slightly raised with flesh sticking together from his sides to under his arms; as he moved, flesh stuck and strung out between his legs and clothing.  His lips were moving but sticking together.

My thoughts were “How can he possibly be helped?” At that moment and to my right, there was an officer running towards me shouting “Abandon ship!”  Upon noticing the burned man, he ordered me to grab a life jacket and help get it on the injured shipmate and help put him over the side.

The next thing I remember, I was standing against chain life lines on the outboard side of the deck waterway.  Any further would be overboard.

The officer then said, “Now you go over.  They have already ordered abandon ship.”

The ship was still listing to port but seemed stabilized. The tide was running full from aft to bow with puddles of oil from ships astern, including the Arizona.  Some thin puddles were burning; others were just starting with instant ignition.  Thicker slicks were taking longer to ignite.

Since the ship had stopped rolling to port, the danger of jumping was only to get out far enough to miss the torpedo blister and burning oil.  Trying to judge missing the burning oil and putting on the gas mask just in case and guessing Ford Island shore to be approximately Olympic-sized pool away.  It was time to jump.

All went well. I missed hitting the hull and went through thin oil not yet on fire.  I removed my gas mask under water – it was slowing me down.  I still run out of air and had to come up early.  Lucky enough; the oil was not burning but water covered with thick heavy oil.

Came up alongside three other men.  We made it to shore and headed to closest undamaged Marine barracks.  Going into the barracks, just inside the door lying on deck were two men, oil soaked and appeared to be badly burned.  We guessed they had come up into a burning puddle.  A Marine took us to the shower room and broke open a couple of lockers.  He told us to throw our clothes in the trash can and take what we needed.

We left as Marines, except I kept my shoes.

So much happened so fast that I really had no time to think back until much later.  I do not recall how much later, but, when I did, my first thought was standing at chain life line with the officer telling me to abandon ship.

I began to wonder what happened to the man badly burned on the ship. I recalled reaching for the life jacket; it then changed to the officer telling me to leave the ship. After going over this thousands of times in my lifetime, it always comes out the same: reaching for the life jacket then standing next to chain life lines with the officer telling me to abandon ship. Everything in between is missing forever.

Maybe that officer thought we would continue rolling over, or the man needed to be relieved from his misery in any way we could.

The first time to share this memory with anyone was just a few years back with Rita, but it has come back to haunt me millions of times.