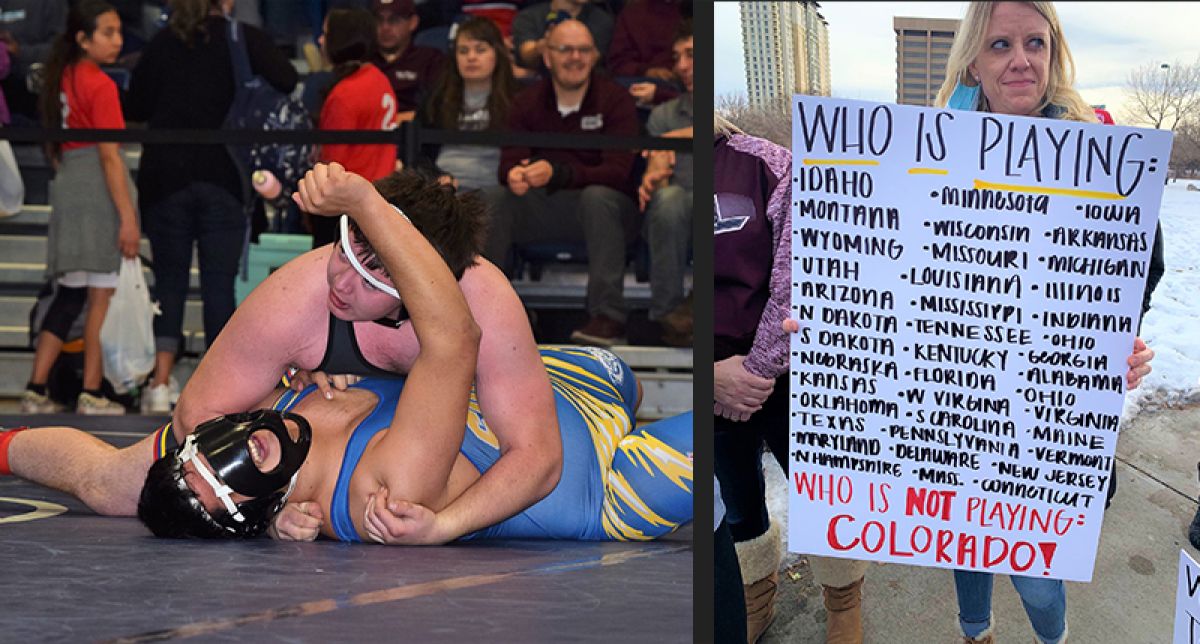 Over a week ago the Colorado High School Activities Association (CHSAA) announced they are unable to secure the needed variances from the Colorado Department of Public Health and Environment (CDPHE) in order to start Season B on time.  They then stated that Season B would not begin until mid-February which would result in shortening the season to barely any time for competition.

Season B, for small schools, represents the biggest turnout and participation in Boys’ and Girls’ Basketball and Wrestling.  When CHSAA stated they would only allow a six-week season, and then tried to eliminate the wrestling opportunities even more, there was loud outcry from not only schools and parents, but this time the students were outraged.

The Governor of Colorado, Jared Polis, was aware of the situation but seemed to want to stay out of the fray as he was busy bringing in the first COVID-19 vaccines to the state.  However, he has received a flurry of complaints from all over the state about this situation as people feel his COVID-19 Public Health Task Force is to blame for their lack of consideration in the health of the youth of Colorado.  As one student athlete put it, “The virus isn’t making us sick, but taking away our athletic opportunities, that means everything to us, is destroying us mentally, as well as physically.”

Soon student athletes across the state started writing letters, making video pleas to the three agencies to reconsider what was being done to them, and even going so far as to leave school and travel to Downtown Denver in order to protest this decision. 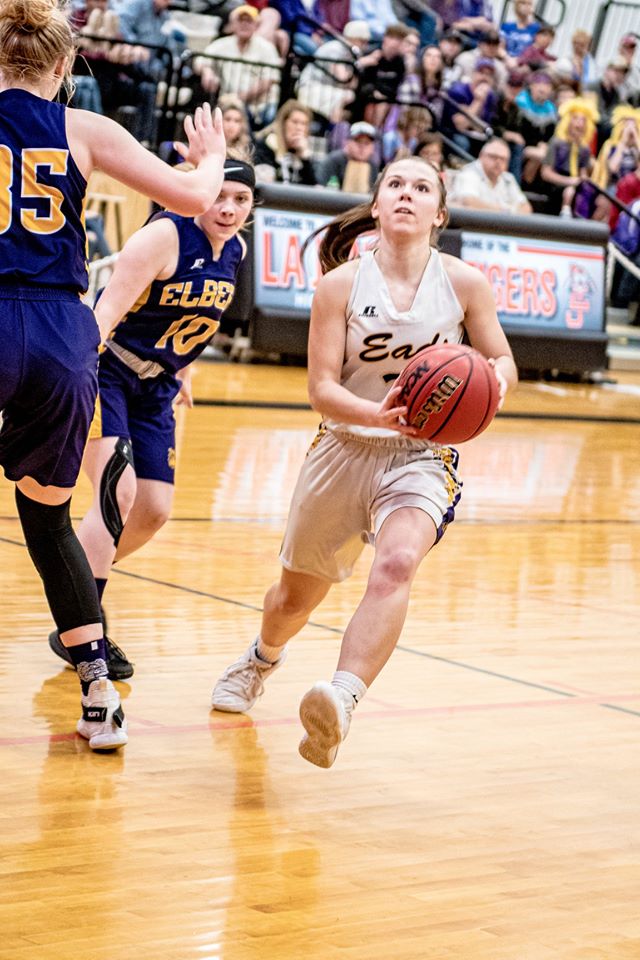 Eads senior Ally Spady has yet to be able to play a sport in her senior year. She is hoping state agencies will consider the terrible situation students are facing. Photo: Ty Lin Williams

For more than a week the agencies have been mostly silent.  Governor Polis made a statement in his presser introducing the COVID vaccine but claimed he didn’t know much about the CHSAA situation at that point.  CDPHE has been virtual crickets on the subject despite the student protest being at their front doors.  CHSAA, in perhaps demonstrating just how tone deaf they are to the problem, in response to the outcry, offered a free mental health webinar to all the student athletes in the state.  That webinar was the final straw in the eyes of those who understand the unnecessary catastrophe that Colorado is about to face when it comes to their students.  The consensus was unanimous, “My kid doesn’t need to watch another damn webinar.  They need to start playing!”

There seems to be few reasons with any consequence why kids are still being forced to miss out on everything important in their lives.  They do not have the ability or the civic privileges to fight for what they need and are therefore getting left in the dust.  According to the state of Colorado COVID-19 data sets, children from age 0-18 have an extremely small chance, 0.00% (not carrying out the decimal points), of dying from the virus unless the child has pre-existing health concerns.  These athletes have passed their physicals, have been, at least in the past, very conscious about their nutrition and health status, and are just not having any major issues if they contract the virus.

In fact, Dr. Zev Zelenko, albeit a controversial physician who successfully developed the Zelenko cocktail to enhance immunity against Covid-19, and who has participated in a number of studies concerning the affects of the virus has stated empathetically, “In young and healthy people, this infection causes mild cold-like symptoms.  It is advantageous for these patients to be exposed to Covid-19, build up their antibodies and have their immune system clear the virus.  This will facilitate the development of herd immunity and help prevent future Covid-19 pandemics.”  Many other physicians agree that the youth could help stimulate eventual herd immunity.

In addition, with the arrival of the COVID-19 vaccine, there is now less of a severe threat of certain vulnerable groups of people in the community to either contract the virus or have severe symptoms if they do.  Originally, students wanted to do their part to save their grandparents and the older people they cared about in the community.  They were compliant to sacrificing their needs for the good of those they cared about.  However, now that the vaccine has arrived and soon their elderly friends and family will be much more protected from the ravages of the virus, it is time the young people, who, by the way, are not considered to receive a vaccine because it is not yet developed for them, get to start having the opportunities they have lost.

The basic, common sense fact is that Covid-19 isn’t killing our kids, but the fallout from Covid-19 is starting to.  Students are suffering from mental health issues, sadness, anger, reckless behavior, suicide, drug and alcohol abuse, failing grades due to the lack of motivation and forced remote learning.  They are also losing motivation to get up in the morning, get dressed, set goals, learn skills, learn life lessons, and earn any kind of academic achievement.  The parents are fighting with their kids because they see the child slipping away and it scares them.  The whole situation is not sustainable.  Students need outlets to express themselves and to learn and grow.  They need sports and all the other activities that go along with being involved in school.

The simple fact is this state is losing our children---and it is happening in warp speed.  It’s time to turn the tables and to rethink how we are treating our youth during this pandemic.

Governor Polis needs to realize that these students are all going to be 18-year-old voters in 2022 and along with their parents and grandparents represent a huge block of voters who will be determined to vote him out of office after the way his task force has dealt with their education system.  He, above all others, could improve the situation our students are suffering unnecessarily through.

CDPHE should realize that the people who are the most upset are taxpayers who pay their salaries.  They are not going to put up with the maltreatment of their children much longer.  CDPHE is going to have to rethink how education is done in this state and take the whole child’s health into consideration when making policies.  Or those in charge will need to be replaced with someone else who understands the devastation they are causing in our youth population.  Colorado is not going to put up with actions that hurt our children, such as this, much longer.

CHSSA has at least shown some inclination and understanding after a weekend of brutal communication with thousands of frustrated people across the state.  In a press release today CHSAA Commissioner Rhonda Blanford-Green announced the following, “We have been working all weekend with CDPHE and State officials to obtain variance approval for Season B athletic and activities to begin earlier than February 1st. With additional language added, we have successfully secured those approvals to begin Season B with their start date of January 18, 2021. This start date aligns with the recent announcements by the Governor’s office to promote statewide hybrid and in-person return to learn models.  The staff has planned a series of Zooms beginning on January 4th through January 6th. We will forward the timeline and logistics for those outreach updates by the end of this week.  A complete Commissioner’s update will be forwarded to the membership on Wednesday, December 23rd.  Flexibility and adjusting with the state’s decisions, not always in our control is how we roll! Season B is a Go!”

Thankfully, CHSAA listened to the plea of our student athletes, although the already shortened Season B is not as long as was hoped for or what was originally scheduled, at least they showed some inclination to work with CDPHE in order to help out the situation.  It’s not perfect, there is much more that needs fixed, but it is a start in the right direction.