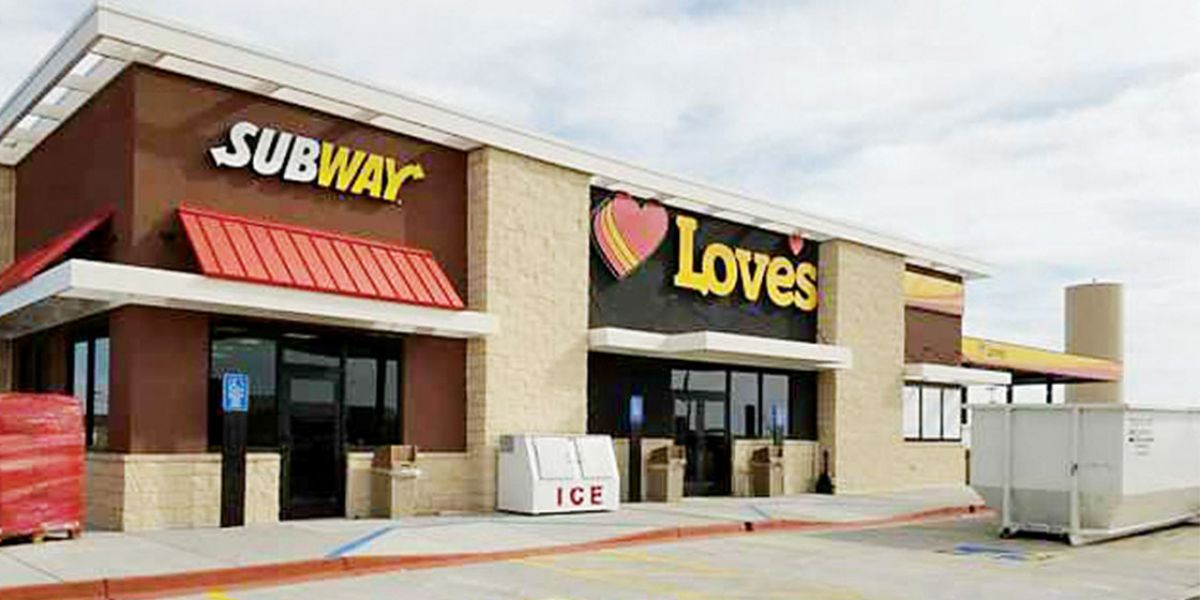 Love's Open and Ready For Business 7AM Thursday

2016-11-02 17:19:38
On Monday morning, empty shelves, stacks of boxes and furniture in disarray may have spelled a rough beginning of the week for Love’s new location north of Eads, but there is no doubt in anyone’s mind that the arrival of a set-up crew “from corporate” will have the convenience store/gas station open and ready for business by Thursday morning at 7am.  Yes, by all appearances, the company is just that good and backs up its promise to its employees:  You take care of the customers.  We’ll take care of you.
Love’s is not a franchise operation.  In these days when corporations cater to shareholders, customers and employees (frequently, in that order), Love’s remains committed to being a totally family owned business.  That commitment is even present in their logo; the four hearts represent the four members of the Love family.
The Love’s business model is almost revolutionary in its simplicity and reminiscent of how many successful American companies used to operate.  Hire well—from top managers all the way down the organizational chart.  Grow your own talent, and promote managers from among the ranks of current employees.  Reward those employees in ways that are most significant to people’s lives and reduce--as much as possible in retail--the high, pervasive cost of turnover. Provide locations with what they need to operate by fixing and/or delivering—usually within 24 hours--products and services that guarantee customers find the same high level of quality from location to location.  Know the market, and build where the competition is weakest—on state highways versus interstates.  Control the supply chain as much as possible, including owning the fuel trucks that deliver fuel and a franchise of the in-store restaurant.  And never become so removed from the daily operations that the owner of the company doesn’t know who is working where and when, even with locations in 48 states.  A perfect example of this attention to detail can be found in what David Grandy, General Manager of the Eads location, experienced.  One morning, the phone rang at the Love’s in Oklahoma where he was working.  The voice on the other end said, “Dave?  It’s Tom.  Tom Love.  How are you?  How’s your family?”  Oh, let’s not forget one salient detail.  When did Grandy receive the call?  On Christmas morning.
So, how does this model translate into local business practices?
Hiring local employees is the number one priority, and this Love’s is fully staffed at 30 employees, half of whom are from Eads.  Employees start out at $11 an hour and have a benefit package that includes 40 hours of vacation time after 6 months of employment, full medical, dental and vision insurance coverage and tuition assistance for employees—even entry level employees—who are attending college.  Also, recognizing that turnover is a reality in retail, interviews are conducted every Wednesday so that the store/gas station doesn’t find itself suddenly operating short-handed with no pool of potential employees.
Shirley, the Subway manager, is a former Wiley resident.  The assistant manager is originally from Denver.
But most telling about the company is the person hired to be General Manager of the Eads location. 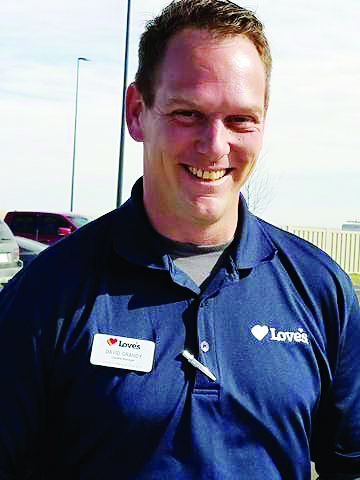 David (Dave) Grandy is a former Sergeant First Class with the third infantry of the United States Army.  He did two tours in Iraq; in 2002, he was with the first troops to put “boots on the ground” when the country was invaded.  He returned in 2006 when he was part of the detail that guarded Iraqi Prime Minister Nouri Al-Maliki.  He also did a tour in Afghanistan from 2011-2012.  Upon leaving the army, he enlisted in the National Guard where he is still an active member.  During his two decades of military service, he had almost a “greatest hits” of experiences.  He was on site immediately after Katrina, guarded pieces of the space shuttle when it blew up over Texas and actually spent a number of mornings jogging behind President George W. Bush, holding a ring of keys in his hand in the event the president needed to use rest room facilities in any one of the number of buildings they passed.  (That’s a story he needs to tell himself.)
In addition to military service, Grandy has also been employed with a police department in Virginia and the Sheriff’s Department in southern Oklahoma, neither one of which provided what he was looking for at this point in his life.  However, he only ended up applying at Love’s at the insistence of a friend already working with the corporation.
During the interview, Grandy was asked if he had any supervisory experience.  “I thought he meant retail, so I told him no,” he says. “Then he asked if I’d done anything like that in the army and I told him I was over 280 soldiers in Iraq. I guess that qualified me for the job.”  The interviewer with Love’s seemed to recognize the obvious:  Grandy was most definitely management material.
Although Grandy has only been with Love’s a few years, he seems tailor made for the job, especially this particular job in Eads.  One of five children and the son of a coal miner, Grandy grew up in Colstrip, Montana, a town similar in size and topography to Eads.  (Colstrip is not located in the mountains of Montana but, like here, on the plains.) When he and Cora, his “better half” and wife of more than twenty years, visited Eads, they immediately liked it—so much so that they bought several acres down by Jackson’s Pond and are in the initial stages of getting funding to buy a modular house.  He and Cora, who will be moving here soon, will live in their RV until the house is completed.
When asked what he likes about the town, he doesn’t hesitate in answering.  “I haven’t met one grumpy person yet.”  He relates the incident that was his first introduction to the genuine hospitality of Eads.  Recently, he was working with a crew on a Monday and wanted to buy pizza for the men who were hungry.  No restaurant was open, but Grandy was given the number to Denise Nelson’s, owner of Cinnamon Joe, cell phone.  He called her, explained the situation and asked if she could help him out.  “She said sure, right away,” he states, “Who does that anymore?” he asks.  “Not very many people.  And they sure don’t do that in places like Washington, D.C. I thought it was great.  And the pizza was absolutely fantastic.”
Grandy is quick to recognize the impact a multi-location, national business can have on businesses in a small town, and, almost immediately upon arrival, set out to introduce himself to the local community.  “I think our presence can be good for businesses,” he states.  “We don’t have everything everybody needs.  We don’t fix tires.  We don’t have unlimited diesel bays.  Truck drivers don’t always want to eat Subway and ask all the time where they can get a good burger.  When they do, I can tell them to go to the Hometown Gas and Grill.  Or if they want the best pizza around, I can send them to Cinnamon Joe. And if anybody around here gets hungry at two in the morning, our Subway is open twenty-four hours a day.”
Of course, only time will tell how things turn out for all concerned.  But, at this stage of the game, it seems likely Love’s will get off to a good start;  Dave and Cora Grandy are actually happy to be here, and Eads is fortunate to have both the business and the people that business has brought to the town.
Love’s will open its doors at 7am on Thursday, November 3rd.  A Grand Opening will be scheduled for a date in the near future.
Tweet