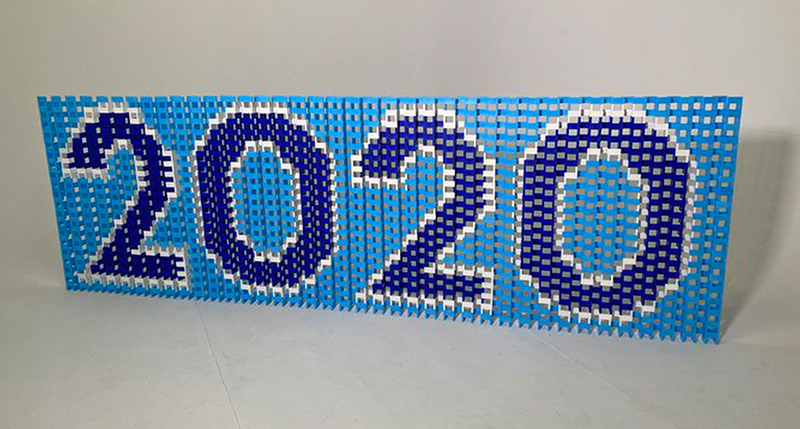 As 2020 is just, thankfully, a day away from being in the rear-view mirror, there is merit in taking a look back at all that has happened in twelve months that, at times, felt more like twelve years. Granted, a trip down memory lane isn’t exactly anyone’s idea of an enjoyable way to spend a few minutes.  But, if nothing else, a review provides a sense of how we got to where we are, especially since where we are isn’t such a great place to be right now.

A nation like the United States with a population of 350 million people requires a very complex, interrelated system to function. An event in one area often has far reaching consequences in other areas that seem, at face value, to be unrelated but are not.  Picture it like a row of dominoes.  Someone knocks over domino number one which then knocks over all the other dominoes in line.

COVID-19, named for the year it was identified, was the big daddy domino of them all in 2020.  Although it has since been speculated that COVID was circulating in parts of the country in late 2019, the virus was reported on January 20 to be present in the U.S. when a patient in Washington tested positive.

Although numerous scientists were sounding the alarm bell, which was picked up by most of mainstream media, no one wanted to believe the dire predictions coming out of labs and research institutes across the country. They may have had to adjust some recommendations over time as more was learned about a virus no one had ever encountered before, but, sadly, their predictions ultimately proved to be generally accurate.

There are currently 19.2 million cases of COVID in the United States with 333,000 confirmed deaths caused by the virus. More than 2,000 people are dying every day. It’s a tragic truth, but it is truth, nonetheless.

Clearly, life in Kiowa County has been impacted by COVID, but the year didn’t start that way.

As 2020 dawned on the horizon, life in Kiowa County seemed to be progressing in a normal – yet very abnormal – way.

As was reported in the January 1 issue of the Independent, sheriffs’ offices in Phillips, Sedgwick and Washington Counties had been receiving phone calls for about ten days from residents reporting sightings of “multiple drones in the sky”.  The reports were not of drones flying here and there with no apparent connection; quite to the contrary, the drones were flying in formation back and forth across the sky for extended periods of time, dispelling the idea that it was just a couple of kids who had been given early Christmas presents.

Deputies in several counties took off in search of the mysterious lights themselves, only to confirm what had been reported as they followed a group of sixteen drones across two counties.

Over the next couple of weeks, more and more sightings were reported as the drones started appearing in counties further and further to the south, including Kiowa County. But the lack of any definitive photos or a central reporting station (both to make a report of what was being seen or to report being one of the pilots flying the drones) left officials somewhat in the dark, so to speak.

The FAA ultimately opened an investigation which was, at best, inconclusive and, at worst, dismissive with the suggestion that people were mistaking drones for stars or airplanes.

Over time, the sightings dwindled, but that did not stop the head scratching from a number of people who knew what they saw. And it sure wasn’t a group of stars.

Mid-January, the Kiowa County Sheriff’s Office released data that showed a significant rise in the number of tickets written for excessive speed (as in people going faster than 100mph on local highways) and serious crimes.

The end of the month brought good news to readers as a full time, state licensed  child care center finally returned to Eads with the opening of the Little Leaders Learning and Care Center.

February started off with the Independent being one of the first newspapers in the area to run a cover story on the virus in the U.S. That article would be the first of sixteen articles directly related to the virus and another nine on related topics to run over the following 12 months.

Several weeks later, the Independent reported on the appearance of two individuals in court, charged with separate crimes but arrested as part of the same sting operation.

Luis Hernandez was arrested and charged with Human Trafficking–Sexual Servitude, a Class 2 felony.  Joshua Olmstad, who was arrested for wanting to have sexual contact with a minor, was charged with Soliciting for Child Prostitution.

Although the pandemic would be in existence for eight months before a case was reported in Kiowa County, a statewide mandate ordering the closure of schools had local students going online after their spring break in March. School officials and local teachers and staff put herculean effort into providing the best possible online education to students, but nothing could replace the personal contact between students and teachers in person in a classroom.

Perhaps one of the most devastating and shocking events to occur in Kiowa County in any year occurred in April of 2020.  As was reported, two KCSO deputies – Undersheriff Tracy Weisenhorn and Deputy Quentin Stump – shot and killed local resident Zachary Gifford as part of a routine traffic stop in Brandon. The reaction of local residents was a combination of shock, mixed with anger in some cases, over the killing.  The Colorado Bureau of Investigation was called in to assist Prowers County Sheriff’s Office in the investigation. A Colorado Open Records Act request from the Independent led to the summary of the autopsy being released, which definitively stated Gifford died as a result of being shot multiple times in the back. Investigating agencies handed a final report over to the District Attorney for review in June who later announced his intention to take the case to the grand jury.

However, nearly nine months after the killing, there is no word beyond that last announcement from the DA’s office. The pandemic has certainly caused a delay in proceedings as the courts in the 12th District have been ordered closed except for minor offenses which are being conducted via Webex.  Nonetheless, the refusal of the District Attorney to provide any update has worn heavily on the community whose only desire is to know what happened on that afternoon in April and to see justice done – whatever that justice may ultimately be. For his part, DA Vogel defends his silence by saying he’s adhering to the requirement for secrecy in grand jury proceedings.

In May, the Independent was pleased to announce that the Colorado Press Association had awarded the newspaper with four first-place awards including Best Editorial Special Section, Best Feature, Best Sports Event Story and Best Series.

At the end of May, an incident involving Yonda Leonard’s employment as Superintendent of Plainview School came to a conclusion with a court ruling that involved a short stint in county jail.

Coverage over the summer months was focused on the construction of a swimming pool in Eads after the current pool was closed due to safety concerns.  What was reported as a promising beginning to the project, including discussion of grants and the proposal of a sales tax to fund construction, led to the measure appearing on the November ballot.  However, the measure was voted down, requriing  the Town Council of Eads to go back to the drawing board to re-envision the project and how to get it funded.

In September, Kiowa County had its first positive case of the virus, ending a several month period of time where the county was literally the “last man standing” in the state.

It was only several months later that the first death from the virus was reported, and it was a loss that shook the community deeply. With deep regret and sorrow, the Independent reported the death of Kiowa County Commissioner Richard Scott, a man well known for having served in that office for a number of years.

Not long after, his successor was named.  Mr. Mike Lening, former bank president and long-time community member with a history of civic service to the county, took his place on the Board of County Commissioners.

Yes, let it be said that 2020 was a helluva year, and that’s far from a compliment. And while the simple turning of a page will not make the trials, tribulations and heartache of this past 12 months disappear, it will demonstrate a truth that the staff of this newspaper has known all along.  Hard times are a part of life and, even after some damn hard times, we’re still here and will still be here, whatever 2021 may bring.