Written by Betsy Barnett on 22 January 2021. Posted in News 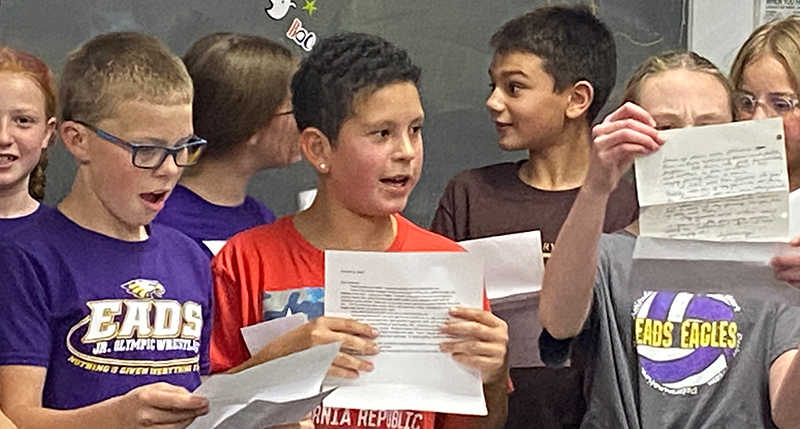 It has been a very difficult time for the community as a whole over the past year.  From the youngest child who has basically lost a year of education dealing with shutdowns, quarantines and disruptions in remote learning, to the oldest residents here in Eads who have in their own way perhaps suffered the most as, in our need to protect them, we have isolated them to the point that they can no longer enjoy that human connection.

In between are the caregivers of the youth and of the elderly.  These are the teachers and the health providers, considered essential, who show up every day and do their very best to keep the light of happiness and life in the eyes of those they care for.

Two women in Eads, both caregivers in their own way, one a teacher at Eads Elementary School and one a health provider at Prairie Pines Assisted Living have found a way to keep that light alive and in doing so have created friendships and relationships that will last for lifetimes---whether that time is short or very long.

Sharon Wilson, Eads 5th Grade Teacher tells how she got the idea to have her fifth- grade class start writing actual letters to the residents at Prairie Pines Assisted Living facility and also to a couple living in the Eads Nursing Home. “I just felt the need to reach out to the residents.  I wanted them to have something to look forward to since they were not allowed to have outside visitors.”

However, the teacher in her knew she had stumbled upon an amazing learning opportunity for her students, “I also know that  hand-writing letters, addressing envelopes, and sending letters through the U.S. Postal Service is almost unheard of with young students.  My students needed a fun way to practice their cursive handwriting and improve their writing skills.  We are so used to spelling and grammar checks on the computer that all of us have gotten lazy with our writing.”

Wilson contacted Cindy Newman who is an experienced care provider at the Prairie Pines Assisted Living facility and asked if there was a way she could help implement the letter writing from their end.  Cindy, who is always trying to find new and fun things for the residents to do, jumped on board immediately.

Wilson soon figured out that not only was this idea a good way to get her students to write more and understand the importance letter writing held in our past, but her students demonstrated they were learning a whole lot more than she would have ever expected.

“I was hoping this idea would just be a learning tool, but through this letter writing project it has ended up being such a blessing to our class.  The 5th graders were a little nervous with the first letter they wrote, and I had to do a lot of prompting on what they should write and what the residents would be interested in.   After that first letter, though the students have done a great job to write back without any prompting from me whatsoever.”

Once the students’ letters were received at Prairie Pines Newman got the residents involved by assigning pen pals and helping them to write letters back.  Newman says, “Some of the residents are excited to write on their own, and for others I transcribe what they want to say.  The residents were not sure what to write the first time they received a letter from an excited child, but soon they found ways to make connections as we talked more and more about who the child was, and what their interests were.   Many of our residents realized who they were writing to and perhaps who their parents, grandparents or even great-grandparents were.”

Wilson goes on to describe some of the positive encounters the pen pals experienced, “Mia's pen pal is Jimmy Bendorf.  When Mia (Crow) told Jimmy who she was and a little bit about her family, Jimmy was then able to make that connection.  Living in Eads for most of his life, he knew Mia's family on both the Crow side of the family and the Sheridan side of the family.  Both Mia and Jimmy like animals and have enjoyed corresponding about their pets.

Addison Courkamp has two pen pals.  One is Maryann Richardson who was at the nursing home with her husband until he recently passed away.  The other one is Eunice Neiman.  Cindy Newman describes how important it is to Eunice to write Addison back right away.  “Eunice is a terrific letter writer.”

Wilson says, “Addison and Maryann have developed quite the friendship and have sent several letters back and forth.  Addison and her family like to vacation and visit State Parks.  Therefore, Addison has really enjoyed reading about Maryann’s adventures (trips).  Maryanne, like the Courkamp family, has visited several state parks throughout the years.”

Wilson describes another developed friendship between Aspen Nelson and her pen pal Bob Miller.  “Bob had told Aspen that he knew her grandma, even though Aspen didn't even tell him anything about her grandma.  Aspen thought this was pretty cool since she hadn't written anything about her, and he had made that connection anyway.”

According to Cindy Newman, “Bob is another person who can make a number of personal connections.  He’s enjoyed writing letters back and forth with Aspen.”

Cindy says the residents write to the kids about an array of subjects that still, despite probably 70 to 80 years difference in age, resonate with them both such as pets, playing games and school.  “The residents are so excited when I bring them a letter,” adds Newman, “Donna Heddles will say, ‘How sweet,’ and Doris Copeland oftentimes gets tickled by the students’ happy personalities.  All of our residents have been excited to receive and write their letters including Dianne Fleshman, Frankie Stoker, Mike Gorman, Eunice and Laurel Nieman, Greg Hayes, and Bud Lowe.”

Wilson says that the experience also has brought some other learning, that sometimes isn’t so fun to realize. “My students have also found that it can sometimes be heartbreaking.  Braya Ferris experienced this firsthand.  She was just getting to know Bunnie Larrew and was enjoying corresponding with her this fall.  When Braya found out that Bunnie had passed away over Christmas break she told me that made her really sad.  When I told Braya about Bunnie she didn't say anything at all at first, but I could see the sadness and shock in her eyes.”

This project has brought so much joy to the students and the senior citizens that Wilson is trying to help all her students make further connections.  “My students enjoy this activity so much that they continually ask if there is anyone else that they could write to.  So, I am actively looking for any Senior Citizen in or from Kiowa County to be a pen pal to some of my students.”

Wilson closed the interview by saying, “I feel this has been a blessing to not only my students and the residents but to me.  It is the best thing when my students' faces light up when I say, ‘You’ve got mail!’  They get so excited and hope that the mail is for them.  When I give them their letter, they can't wait to rip open that envelope and see what stories and adventures await them.”

Yes, there is something very powerful about those words, “You’ve got mail!”  With a project like this, those words represent learning and appreciating others for who they are, relaying important life lessons, and helping those who have been isolated and lonely find excitement and joy and a new hope that soon they will receive another letter.

Cover: What is more magical to young and old alike than those words, "You've got mail!" ? Photo: Sharon Wilson