After Nearly Two Decades, The Eads Senior Citizens Are Home

Written by Betsy Barnett on 29 January 2021. Posted in News 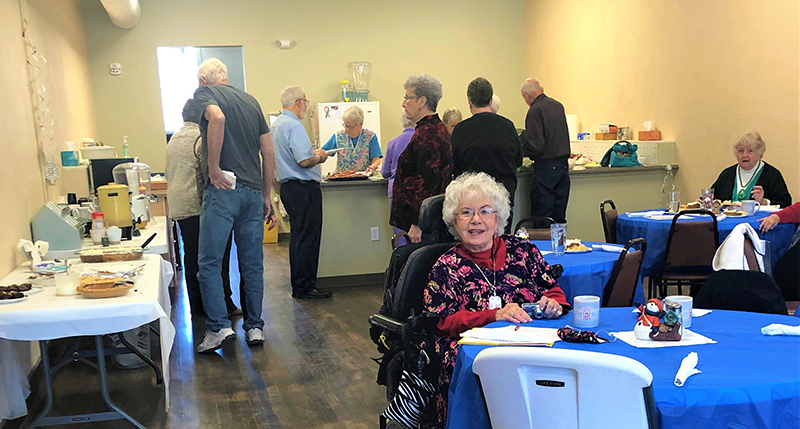 “Home Sweet Home,” as the saying goes finally became a reality on Wednesday, January 20, 2021 when the Eads Senior Citizen’s inaugurated their newly renovated senior center in the beautifully transformed historical building that once housed Scoggin’s Grocery and Wissel’s Dry Goods on Maine Street in Eads.

For those of you who weren’t born 20 years ago, or who just plain forgot there was an ongoing renovation project happening right there on Maine Street, the three building complex owned by Kiowa County that includes the Scoggins’ building, Wissel’s Dry Goods building and the building on the corner of Maine and 13th that through the years has served a number of commercial purposes have been under a renovation project known around these parts as the “Murdock Project” signifying the name of the last owner of the buildings.

Toward the end of 2020, the building on the corner and the entire upstairs area of all three buildings was completed and became the Sand Creek Massacre National Historic Park Visitor Center and administrative offices.  It will soon also house important archives associated with the 1864 massacre of helpless Cheyenne and Arapahoe people that took place some 15 miles east of Eads.  The visitor center also has a bookstore that has not opened as of yet due to the coronavirus concerns.

Longtime senior center member LaVerle Kelley was at the grand opening of the new senior center, “We came up with the idea to build a new senior center in 2002 when we started noticing that the current building we were in --- the Whitelaw Building located between the bank and theater--- was dangerous for senior citizens, especially those who used walkers and scooters for mobility.”  Kelley remembers they formed an initial committee made up of not only Kelley but also people who have now passed on like Faye Barber, Pansy Foxworthy and Alice Weil---to name just a few.

Kelley did say, “At first the economic development board was going to donate land to build a new senior center that would be located just east and a little south of Prairie Pines.  For years we kept holding bake sales and attending commissioner’s meetings with the hopes our committee could find a way to move the project forward.  That project finally died out by 2008.  At about that time, the Legion Hall was in bad shape and there was talk about renovating it and making it the senior center.  But no one really wanted to have it located out of the city limits and across the highway.  After that I was pretty much out of ideas and quit trying.  But the commissioner’s and other senior citizen leadership kept pushing.”

Records from 2009 and forward show a slow by steady progression of an idea to purchase the Murdock Buildings on Maine Street and convert them into a senior center and a Sand Creek Massacre Visitor Center.  Grant funders liked the project concept and it slowly developed.

However, the project would have never been completed had it not been for Cindy McLoud, who managed to land a large grant in 2014 to keep the project alive.  Then, as a county commissioner McLoud continued to write grants for the project.  She finally landed a huge agreement with DOLA who would pay for the balance of the project if the Parks Service would also come through with their share of the cost.  That deal helped to push the final work through that ended up being very costly.  McLoud would end up being the source of at least $2 million worth of grant funding for the project.

In order to finally finish, the County was nearly out of money and the budget was still calling for quite a bit more in 2019.  Kiowa County Economic Development Foundation then stepped in and were able to utilize historic tax credits to get the project over the final hump.

However, as was evident on Wednesday, there is still some work not completed in the larger Wissel’s building and more discussions will have to occur to actually get it all completed.

On Wednesday, Center director Gail Voss cooked up a luscious meal in the new kitchen that included spiral ham, cheesy potatoes, and homemade carrot cake.  Others brought potluck items to finish off the meal.  On this day they served 22 people and sent to-go boxes out to five more members who are still concerned about virus issues.

Voss says, “We are thrilled to finally be in the center and actually holding our first dinner of 2021 in the new building couldn’t have been any better.  We would love to have everyone in the community who is 55 or older join us each month.”

Voss hopes that now that they are in the new center they will start planning and organizing more events.  “We were excited to get moved in and now we are looking at how to expand into the rest of the space.  There’s potential for many more people to use the center.”

Voss is referring to the very large space that contains an impressive and beautiful sunlight that was once the Wissel’s Dry Goods space.  Currently, that space is not quite finished as the County has now run out of money.  That large space still needs electrical outlets installed, ceiling finishes and floor finishes.

At the meeting the seniors voted to put money into finishing the other half of the center.  However, they will meet with the Board of County Commissioners (BOCC) to see if a plan can be made to, first of all, finish the middle building, and second of all, perhaps find the best use for a space that is more than double the other side.

The Independent spoke with Commissioner Donald Oswald and inquired as to their plans for the old senior center, known as the Whitelaw Building, located across the street from the new center.  “As of now we won’t do anything with it as there is still quite a bit of art supplies and 2-3 kilns stored in the back room.”

Hopefully, once the senior citizens settle into their new facility, the BOCC will work to find an appropriate use for the Whitelaw Building.

At this point, all the senior citizens agree that they love the new space and are excited to see what can be done to expand into the rest of the facility.  As of now, however, they are finally home and their new home is oh so sweet.