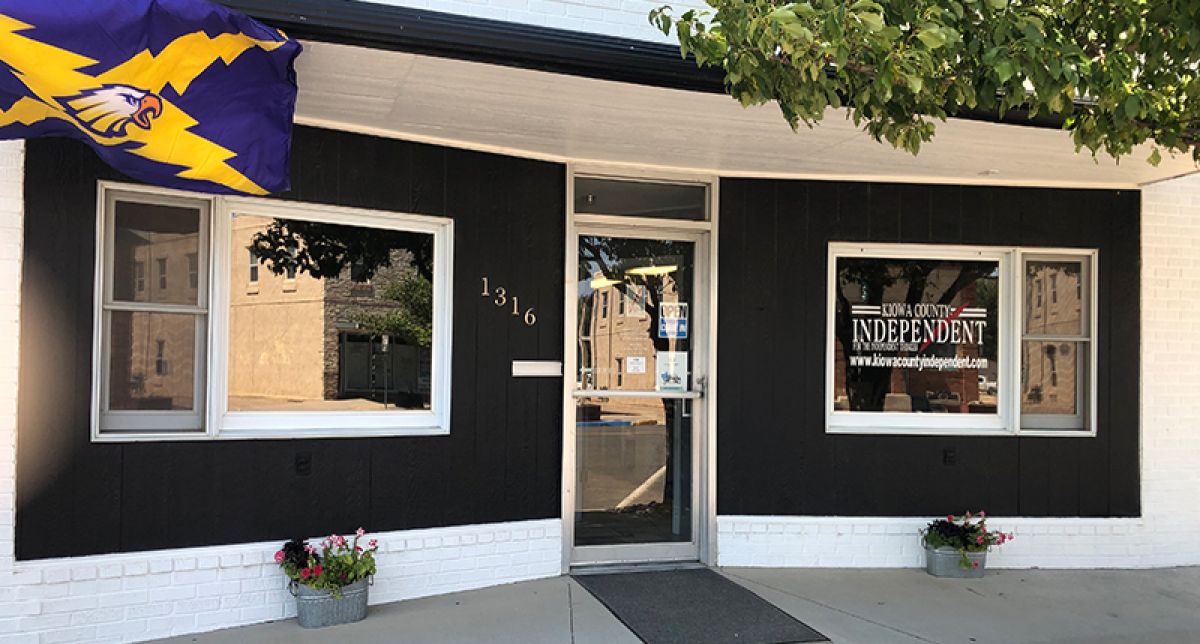 There’s a saying that “a good newspaper is the heart of a community.” If that’s so, then let it also be known that this heart has been beating strong for five years as this week marks our fifth anniversary in publication.

On Wednesday, February 3, 2016, the Kiowa County Independent published its first edition, and no one was more excited – and, frankly, amazed – than the three women who brought it to life.

The idea had been in the works for several months before that first edition, sparked by the news that the current newspaper – that had been published for 129 years, at that time – was going to stop publishing and the publisher’s lifelong dream of running a newspaper one day.

But let there be no doubt; the three women involved in getting it going were aware of the challenges ahead.

The newspaper business was viewed by most as a dying industry.  The combined forces of 24/7 cable news with viewers expecting news coverage within a few hours of an event happening and the overwhelming presence of blogs, online newspapers and internet “news” sources with sketchy – at best – credibility all vying for the public’s interest were slowly but very surely shoving traditional newspapers out of the media market. Even major dailies owned by corporations with deep pockets were scaling back, and in some cases, closing down altogether their regional newspapers around the country.

Southeastern Colorado was no exception. The Lamar Ledger, sadly, became a shadow of its former self, and the Pueblo Chieftain discontinued newsstand sales in this part of the state.

And the tiny crew determined to give it their best shot also had their own challenges. Two of the women had never been in the newspaper business before. One of those two women – the publisher -- was still employed full-time as principal of the high school, a time and energy intensive profession even in easy times, and was funding the venture entirely out of her own pocket. While highly adept at technology and intuitively creative, the second woman in charge of graphic design and layout had never laid out a newspaper before and had to become proficient overnight at several different software programs.  And the third woman, who had experience working in media, was still reeling from a huge personal loss in her life and wasn’t quite certain which direction her life was going to take.

But none of those issues were “on the table”, so to speak, when the three women sat down at the kitchen counter in the publisher’s house and plotted out how to make the newspaper a reality. To the contrary, there was a strong commitment to publish a newspaper that was high quality, had integrity and was as professional as possible.

From its conception, there has been one broad, underlying philosophy driving what became the Kiowa County Independent, and it was best summed up in a single word:  community.

Coverage, whether it was news events or business or sports or weekly columns or “lifestyles”, would be focused on issues that were important to those people with strong ties to the community and written by the people living there. There was a conscious editorial effort to explore the positive things happening in the area and to unearth the potential waiting to be developed in a county with a population that averages less than one person per square mile. But, most of all, the newspaper was determined to be a voice that was saying, in a myriad of ways, “who we are is who we were and who we can be.”

“Community” was far from just a philosophical approach.  It was also an unspoken contract between the newspaper and the people it served, ultimately making the Independent anything but a solitary effort. From day one, there have been those who stood in solidarity with the newspaper, even when its future was uncertain. Businesses who didn’t even have an advertising budget and were in an economy that was struggling committed scarce revenue to running an ad. People came into the office and subscribed, saying they wanted “do their part” in encouraging the effort. People called with suggestions for stories or to say that they enjoyed a particular story or to criticize an article that had been run. That’s the dynamic joy of a newspaper – to get people talking.  And we knew we were on the right track when we got calls from people genuinely upset they hadn’t gotten their paper that week.

In looking back over the last five years, the newspaper has covered stories of both triumph and tragedy in both the past and the present.

Readers have been given perhaps the most in-depth telling of the Sand Creek Massacre in print anywhere as told by a talented local writer with expertise, experience and devotion born of more than a decade spent as an integral part of the team that brought that monumental event into the consciousness of the nation.

Stories of the people and events that populated the history of Kiowa County have been told (to the delight of the writer, most of all), reminding readers of the quiet strength and endurance in the face of all odds that still resides in the hearts and minds of those who call Kiowa County home.

The railroad, that entity that literally forced the entire town of Eads to be moved three times but had grown suddenly silent to the detriment of the county in ways that are difficult to measure, was resurrected to the astonishment and disbelief of all but the heartiest souls, all due to the efforts of a man and his company who focused their collective attention on a region that’s been ignored far too long.

Large tech companies made the trek to the southeastern plains and put on a remarkable display, encouraging the brightest minds of local youth to consider new horizons in their future.

New businesses sprang to life, ranging from those growing the best tomatoes to ever grace a table to farmers growing hemp with its limitless possibilities to a major chain of gas stations opening a location north of town to the “Gas ‘n Grill” and its daily specials that have people lined up out the door to a young mother determined to change the diets and health of people in the region by introducing millet flour in cooking to a new cattle company selling beef directly to customers run by the youngest generation of one of the founding families in the county to a real “treasure” of a store opening on its doors in celebration of all the region has to offer.

Strange lights appeared in the night sky, prompting even the most skeptical to scratch their head in wonder at just what was going on overhead.

A virus that no one had heard of a year ago has taken an unimaginable toll on the nation, destroying the lives of more than 440,000 families and the livelihoods of millions, has ultimately cost this county some of its most beloved community members, threatened the existence of some of the county’s most solid businesses and sent the local schools – a shining star in the community – scrambling for ways to keep the local youth engaged and hopeful about the future.

And, even as the nation roiled in the aftermath of a man’s death at the hands of police, Kiowa County, likewise, has dealt with the death of a longtime resident at the hands of local law enforcement.

Over the past five years, precious babies have come into this life and treasured elders have passed away. New families have moved in and discovered the joys of small-town life while others have moved away.

That’s the nature of life..

For its part, the Independent has not been immune to change. Of those initial three women, one moved on to a totally new career, paving the way for an exceptionally talented and creative man to become an integral part of the team. Another moved away but continues to add her two cents worth to a publication that holds a very special place in her heart and always will, no matter the distance.

Yet, the woman who started it all – despite the naysayers who said it couldn’t be done – continues on, pleased at the numerous awards the newspaper has won and grateful for the accolades when other people from other communities call up and ask that the Independent does for their community what they think the Independent has done for Kiowa County.

In the grand scheme of things, five years is not a particularly long time. But five years in the life of a community newspaper isn’t measured in the number of days or weeks or editions or pages that have been printed or the readers or advertisers the newspaper may have.  It’s measured in the events that have been covered, for each one leaves its mark on the people who bring that story to the public.

On behalf of the staff of the Kiowa County Independent, let it be said that, if a newspaper is, indeed, the heart of the community, here’s to that heart continuing to beat as strong and steady as the people in the community it serves.