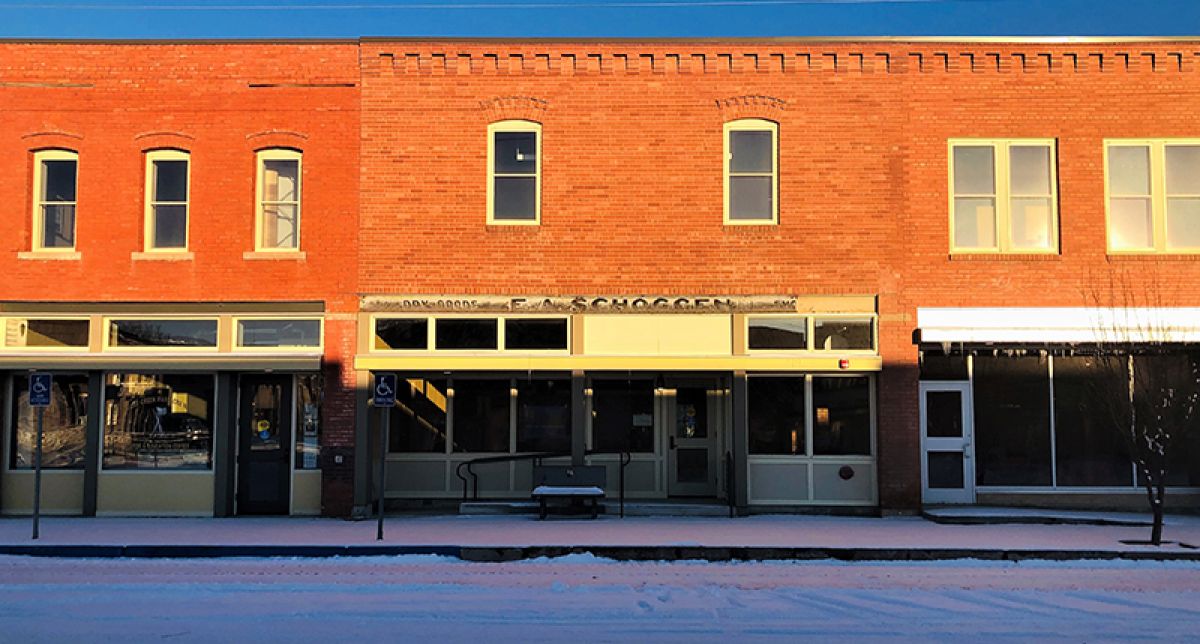 At their last meeting, following roughly an hour of discussions and presentations from the senior citizens, the library district and the county administrator, Commissioner Oswald made the motion to allow the senior citizens full occupancy of the Schoggins building and the Wissel building, two of the three historic buildings which were restored and renovated on Maine Street.  The third building is leased to the National Parks for the Visitors Center for the Sand Creek Massacre National Historic Site. Commissioner Robertson seconded the motion which passed 3-0 with Commissioner Lening voting aye.

That vote is essentially the conclusion of a discussion that has been going on since January 12 when, at their request, Kemma Alfano, Director of the Kiowa County Library District, presented the commissioners with a proposal.

Alfano, who has been in charge of the library for 5 years, has been advocating for a new location for the library for a significant amount of time, citing the restrictions that are inherent in the library being housed in the county building and severely limit the advantages the library could provide to the community.

As she describes it, the role of public libraries in a community has evolved far beyond simply being the place where people check out books. Libraries around the country are providing much needed access to internet for those who don’t have it, including students who need to research topics after school or individuals who are searching for employment. They serve as the site for workshops, resource sharing and after school group activities for children. Due to the predictable nature of their extended hours, which include being open on the weekends, they also have become “third places” that strengthen communities– that is, not home and not workspaces but a third place where both intentional and random relationships are built.

The necessary ingredient in accomplishing all those things is the location and accessibility of the library, both of which Alfano states are hindered by a library that is located in the basement of the county building, is only open during the weekdays from 8am to 4pm, is closed on holidays and only has roughly 1300 square feet of space.

During her presentation to the commissioners, Alfano proposed that the library be located in the Wissel building, which would allow her the freedom to expand hours and days, is located on Maine Street with increased access by the public and is 2200 square feet. She also outlined the ways in which a unique collaboration benefiting both the library and the senior citizens could be created if the library was located in the new location.

During that meeting, the commissioners shared that the Wissel building is not yet finished and will require an investment of roughly $100,000. One of the commissioners stated that funding could feasibly be obtained with a grant for the library, especially given the increased role libraries are playing in communities and with the collaboration with the senior citizens that Alfano proposed.

That was the backstory when the commissioners met on February 11.

Members of the senior citizens group attended, including Joyce Berry, Doris Lessenden, Madonna Pollreis, Loretta Seibel and Gail Voss. Other members were in attendance but did not speak.  Kemma Alfano and Valerie Briggs attended on behalf of the library.

The seniors discussed their plans for the Wissel building to be an event center, including as a place for “showers, dances, weddings, a pool table for the kids” and other events, stating they “already had one shower scheduled.”

The senior citizens currently meet only twice a month, for a breakfast and a lunch. Commissioner Lening asked how they planned to organize all of those proposed events, given the limited number of events they currently hold. He was told by several members they “just wanted a lot of people to use the space more often.” Neither Lening nor the other commissioners pursued further questioning about the details of their ideas.

Both Joyce Berry and Doris Lessenden reminded the commissioners that the group has been waiting for 20 years and they were promised a new center, adding that many of the original members of the group passed away before the new center was finished. In their words, they want a center they “can grow.”

To be completed and ready for use, the Wissel building currently needs to have the floor finished – at this time, it is particle board – electrical lines run and electrical outlets installed and the open rafters painted black. As stated, it’s estimated that $100,000 is needed to complete the project.

Joyce Berry stated that she had checked into prices for flooring and the seniors are prepared to pay $15,000 to do the floor, possibly in carpet or some other material, depending upon the price.

During the discussion, Alfano proposed once again that the library and senior citizens group share the space to benefit both groups, but the senior citizens were clear that they were not interested in the proposal, although they were sympathetic to the library’s situation and offered to try to find ways to work together.

Commissioner Lening said that he would like to table the discussion and wait to make a decision until he could study the situation and better understand the ramifications of whatever decision is made.

However, Berry urged -- with the support of the other senior citizens in attendance -- that the decision please be made during the meeting.  “We have waited long enough,” she said.

That led to Oswald making the motion, Robertson seconding and all voting aye on granting the senior citizens sole access to both buildings.

At this time, the commissioners’ decision leaves the library in its current location until other options become available. What those options may be are not readily apparent.  There will also be questions on just exactly what work will be done on the Wissel’s building in order to get it up to standards and usable for the senior center.