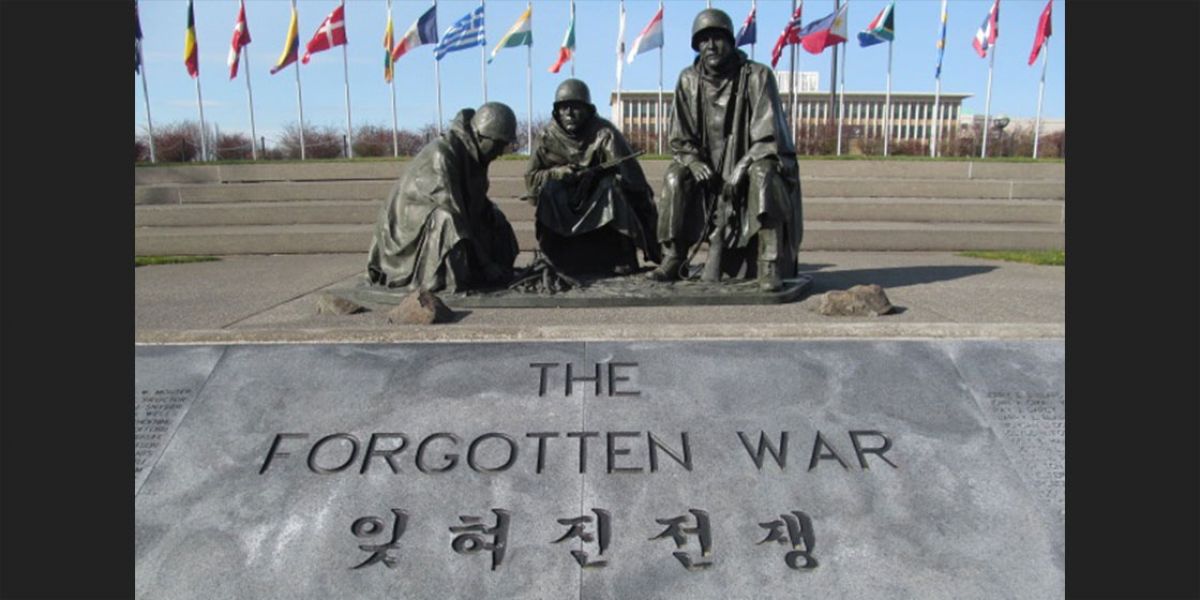 2016-11-09 15:31:26
Bill Woelk received notice that he had been drafted by the United States Marines to fight in Korea on the same day that he was burying his older brother, Hank, who had recently been killed in that very same war.  From the moment he made that first statement to the end of his story, Bill spoke of events that were painful, confusing and, for most people, quite probably enraging.  Yet, his tone was blunt, to the point and reflected a willingness to be honest that is rarely found in those who speak of war.
Bill was drafted in August of 1951, at the age of 21 or 22.  His basic training was completed at the Marine Corps Recruitment Depot in San Diego.  “Training was supposed to be ten weeks long,” he says, “but they cut it to eight weeks because they needed soldiers to fight.”  After a week “off”, he was shipped to Camp Pendleton where he completed advanced training.
Then, in February of 1952, Bill, along with 5,000 other Marines, were transported aboard the USS Weigel to South Korea. The trip, not counting a brief layover in Japan, took a total of 18 days.
At this point, Bill hesitates, and his voice takes on a different tone.  “I can’t remember much of what happened,” he says.  “I haven’t ever been able to remember much.  That year is kind of a blur.”  He remains silent for another brief moment and then continues on.
“I know we landed on the beach below Chosin Reservoir,” he says.  “We were on the west side of the country, and I’ve never been so cold—so cold—in my life. And our barracks? Our barracks were nothing more than a four man tent.  A tent where four men were supposed to sleep in the coldest weather I’ve ever known.”

Bill was right in the middle of an artillery Battery and, as he says, “It scared the shit out of me.”  He no sooner finishes his sentence before quickly adding, “Please excuse my language.  But it did. It was frightening.”
That existence for him went on for four to five months after which he was moved east where “it was better…at least it was warmer.”
But weather and surroundings aside, Bill’s job in the Korean War was one that held within it dangers few could anticipate.  Bill worked in the communications section of the military, specifically in the message center.  When possible, they would transmit messages via Morse Code using power coming from a generator.  But, some messages had to be delivered by hand, which meant a soldier—unarmed and running—had to cross roughly a half mile of open country to hand deliver a message to the Main Line of Resistance.  It was easy to see the potential of injury and the inability to prevent it by even carrying a weapon; nonetheless, that was expected of the messenger, and that messenger was Bill.
As he speaks, a picture begins to emerge of a young—recently inducted—soldier being forced to fight in a war that had already taken one brother and that he didn’t support while being assigned to a job that forced him to be in the open, unprotected and unarmed.  One can only imagine the anger that would cause.  Yet, in his relating of the story, he never once spoke of his feelings aside from the brief admission of fear.  Then again, he didn’t have to.  It was evident in the clipped words and blunt descriptions.

“As the war progressed,” he continues, “the intensity slacked off.  But so did the supplies.  At one point, each soldier was given six clips a day with eight cartridges in each clip. That’s all that was issued in a day—six clips for soldiers at war.”
He pauses for a moment and it feels as if he’s talking about things that come from the depths of his heart. “Have you ever heard of Bunker Hill?” he asks.  “That was kind of a game we played with the Koreans and Chinese—I think the Chinese were in the war, by then.  We would fight like hell to take Bunker Hill, claim it as ours and then…leave it.  The Koreans and Chinese would come in behind, take it back and fight like hell to keep it.  So, of course, we’d fight them again—all of this, back and forth over a hill.  It seemed like a game to us.  A terrible, terrible game.  I never knew the reason.  I still don’t know.”
When asked if he grew close to any of the men, he answers without hesitation.  “No. I didn’t.  I didn’t want to.”  He pauses for a brief moment. “There was an Indian—a real neat kid. I liked him a lot, but I don’t remember his name.  Aside from him, no.  I never wanted to get close to anyone because they could be killed the next day.”
At this point, his voice breaks and he’s silent for a long moment.
“I saw a lot of kids get killed over there.  Kids who never had a chance to grow up,” he says. “I saw a lot of kids lose their minds, too.”  Another pause.  “You know, I had six brothers and three sisters and all of my brothers served in the military.  All of them.  Hank was the one who wanted to make it his career.  His buddies that brought him home said that he never even knew what hit him.”  Bill’s voice breaks again—just slightly, this time—and the time to recover is less, as well.
“Truman didn’t even call it a war,” he says, the sorrow being slowly replaced by anger.  “He called it a police action. A police action. What did others call it?  The Forgotten War.  How would that be?  Lose a brother or a buddy in a war no one remembers?  And for me…I got malaria and wound up in the veteran’s hospital in Denver for a month.  It leads to something like Hepatitis C and that doesn’t ever leave a guy.  I still have a problem with my liver swelling.  I still carry that war with me, every day.  It got inside, and I’ve never been able to get it out.”
And then the voice of the Bill who started his story returns, a signal that the time is over.  “I’m sorry I couldn’t be more help.  Like I told you, I don’t remember much.  I hope that what I told you helps, at least a little.”
And the conversation ends.  Little did Bill know—little would he even allow himself to know—that his voice is quite probably the voice of countless others…those who speak and those who speak on behalf of those who are gone…but who question the sanity, the logic, the justice and ability to justify what sense there is in an unnecessary war.
Tweet